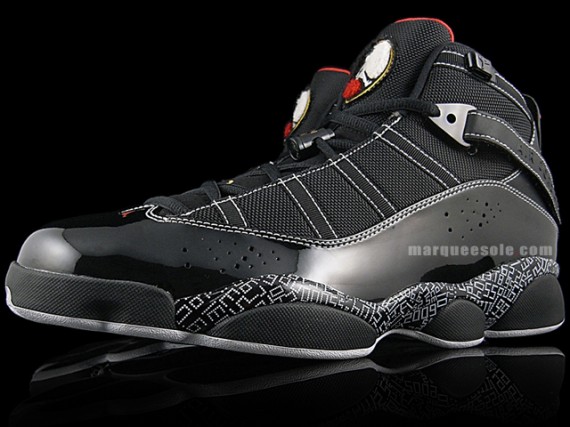 The Air Jordan Six (6) Rings has been one of the more successful and liked hybrid models from Jordan Brand to date, so while the team at Jordan Brand have slowed down with the number of colorways we’ve seen of this particular shoe since the “Championship Pack”, we will see at least one more release of this shoe in a new colorway very soon. Here is a look at the Air Jordan Six (6) Rings “Hall of Fame” colorway, which honors MJ and his induction into the Basketball Hall of Fame this year. The HOF Air Jordan 6 Rings comes in a Black base with hints of Metallic Gold and Varsity Red. Additionally there is a number graphic printed on the midsole of the shoe. These are slated to be released in the upcoming months, while a specific release date has yet to be finalized. However like the Air Jordan III “True Blue” Retro’s, you can pick these up now at marqueesole.