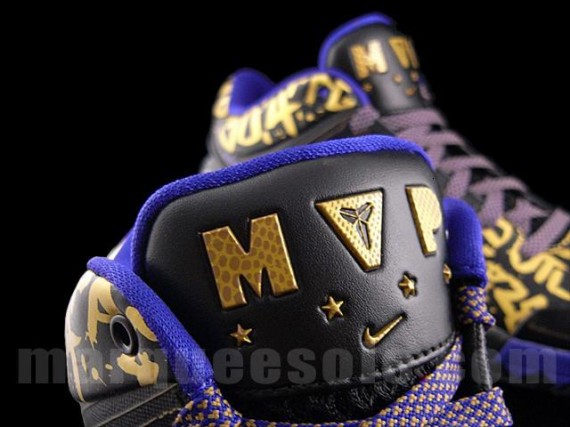 So what if Kobe Bryant didn’t win the 2009 NBA MVP award?!  He ended the season hoisting both the Larry O’Brien and Bill Russell trophies, having won both the NBA Championship and Finals MVP, respectively.  We all know that Kobe’s signature sneakers during the Finals were spectacularly scribbled upon, and now the black version he wore during the away games is ready for purchase.  The Nike Zoom Kobe IV Finals Edition ‘Away’ can now be called the ‘Finals MVP’ edition, now that Nike added those letters in metallic gold to the tongue.  Other than the MVP tongue and graffiti, these only differ from the Purple Haze edition by their swapping of yellow for metallic gold.  If you prefer these, they’re available now from Marquee Sole.