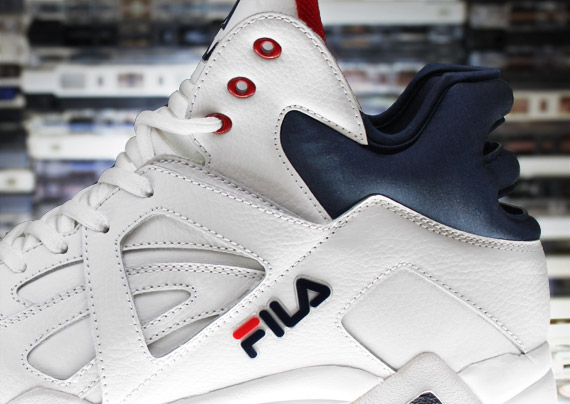 The Cage by Fila

Fila has long been well-known for their classic tennis shoes and velvety warm-up suits, but people seem to forget that during the early/mid 90’s, the Italian brand was a very strong competitor in the basketball category as well. Best known for signature models for NBA stars Grant Hill and Jerry Stackhouse, Fila captured a nice chunk of the b-ball market at the time, but aside from the sigs, perhaps the most beloved offering of them all was The Cage. The shoe took the Fila basketball line in a bold new direction that incorporated a progressive new take on the traditional Fila aesthetic, while pushing the limits of footwear design and innovation with the foam “cage” piece around the ankle. Lost in obscurity for almost 20 years, Fila’s cult favorite, The Cage, is finally making its way back to store shelves in 2012, so to get the full story on the comeback, we sat down with Fila’s lifestyle footwear product manager, Louis W. Colon III for more details. Keep reading after the jump for our full conversation with Louis and a look at the first three Cage colorways, which are hitting select retailers like New Jersey’s Packer Shoes as we speak. 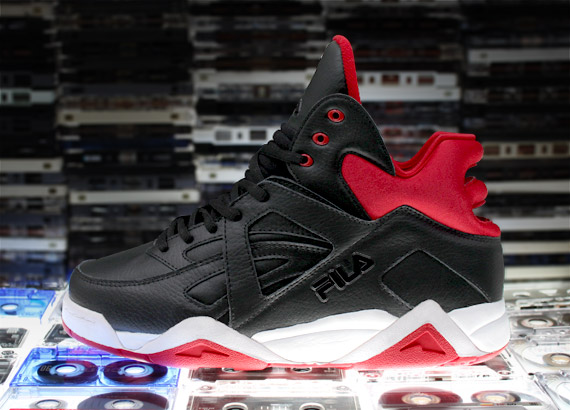 Sneaker News:  For our readers who may not be familiar, can you give us a little background on the original Fila Cage and why it was significant to the sneaker game?

Louis W. Colon III:  The Cage originally came out in 1993. It came in two different material-ups. One was all leather and the other was “Filabuck.” There were four colorways, three in leather and the black one in the Filabuck. The Cage was innovative because it had that back foam “Cage” piece that was a new technology for a basketball shoe at the time. The sole unit was a new outsole that had leather with a carbon hit on the quarter panel and the back counter and we tried to take that all and tie it into the new version.

SN:  A lot of time has passed since ’93. What motivated the decision to bring the shoe back after all this time?

LC:  Well, we had been looking through the archives, because we have a deep basketball history and, of course, the tennis history that everyone knows. I wanted to bring back something that had a significance and that people remembered. And the shoe just had good lines! That was the key for me, like – what shoe can I see myself wearing today and what had a good story behind it? So I wanted this shoe to be a story leader in the resurgence of the history of the brand. 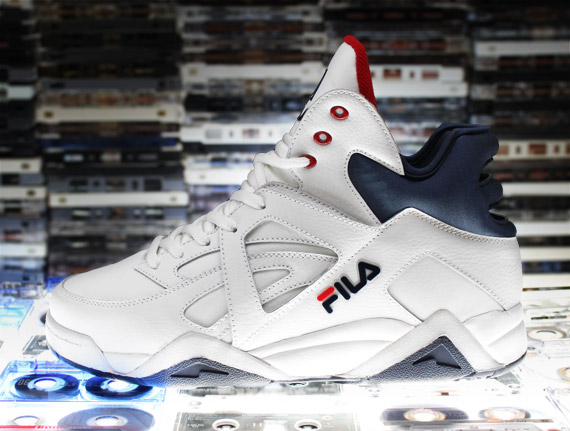 SN:  You made a few small changes from the original design. Can you give us some insight on what was changed and why?

LC:  I wanted to do a slight update. The lines in the original were a bit higher. It was tall and I wanted to bring that down some. I wanted to be able to reach a kid that remembered the shoe and still reach somebody that didn’t, but just sees it as a good shoe. I wanted to look at those lines to make sure that a real sneaker guy would understand that it’s just a good design overall. I didn’t wanna take anything away from the toebox or the quarter or anything, but it just needed to be updated a bit. We took the back collar and put memory foam instead of the original foam that it had. So the memory foam is definitely an updated technology, because no one was using that in footwear back in 1993. We started wear-testing it to see – does the memory foam make sense in the collar? – and it’s actually a much better fit at this point.

Other little things we did – I tweaked the tongue, because it was much higher so I brought that down and it had a curve in the middle that we evened out. We took out the carbon fiber piece, because right now, we’re using that in a lot of other shoes and we wanted to make this distinctive by taking it out. We kept the same lines in the eyerow, the eyelets, the top overlay on the quarter. All of that is exactly the same. We also brought back the original box and just updated some of the graphics a little. The box still has the cage wiring graphics with the handle with the pull-up separation. 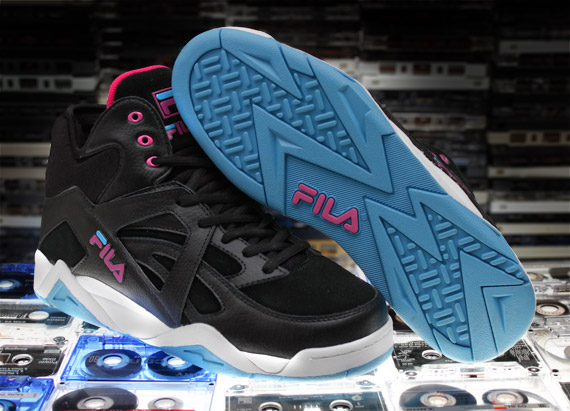 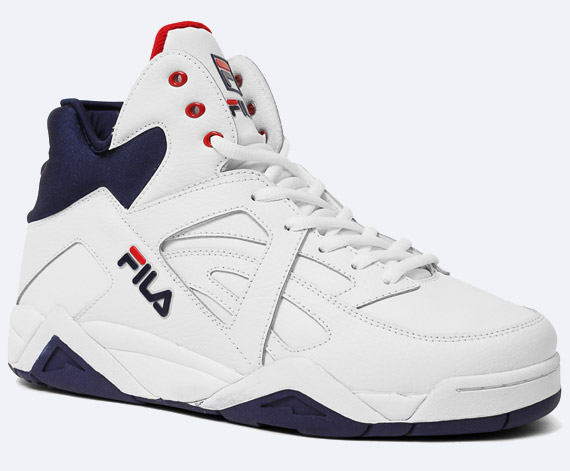 SN:  What can we expect as far as colorways?  Will we see the four original color schemes as well as some new stuff?

LC:  Yeah, so the white/peacoat/chinese red is a direct takeaway from the original. The black/red was an original. We’re gonna come back with the black/white later, because I didn’t wanna take everything from the original catalog right away. Then I added some trend pop colors like grey/purple, white/blue/yellow, black/pink/blue. We’re just using the lines in the shoe and the accents to really pop the color, pop the logo and give somebody a quality shoe at the same time.

SN:  When can we expect to see The Cage hitting store shelves?

LC:  They should be out by the end of this week if you check out stores like Packer Shoes that will be carrying it. We have three colorways dropping in March, two in May and then we have like seven colors coming for back-to-school. I did something really special for a cream version. Everyone knows us for the cream, so I did a cream Cage with a gum bottom. I did a black/black with black leather and suede. Then we did some more pop color ones.  We did a peacoat with a green hit. We did a grey/grey version.

I’m already working on Spring ’13. So we’re adding some perfs to the quarter and the toebox and we also broke up the pattern a bit as far as materials and colors. Right now you see a really clean solid upper, so I’m gonna start breaking that up so the accent won’t only be in the collar. We also took down two colors for kids, because we know a lot of dads remember the shoe. So that’ll be dope and I’m really looking forward to expanding that in the next couple seasons too. 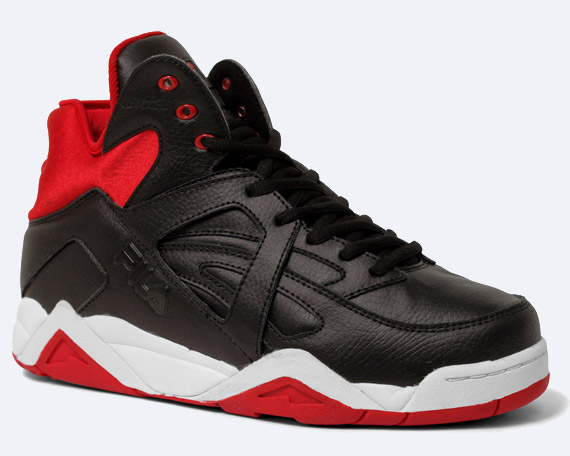 SN:  Is this the beginning of an ongoing project to bring some more classic Fila models back into the mix?

LC:  Yeah, my goal is definitely to educate people on the brand and the history and how deep our closet can get. We have a bunch of styles in basketball and tennis that we’re experimenting with to see what we can do to make the old consumer and the new consumer happy at the same time.

SN:  Any closing words on the Cage?

LC:  Again, we’re just hitting you with some quality uppers, a nice tooling, a good shoe that fits well and the memory foam is definitely a nice technology update to a classic shoe. 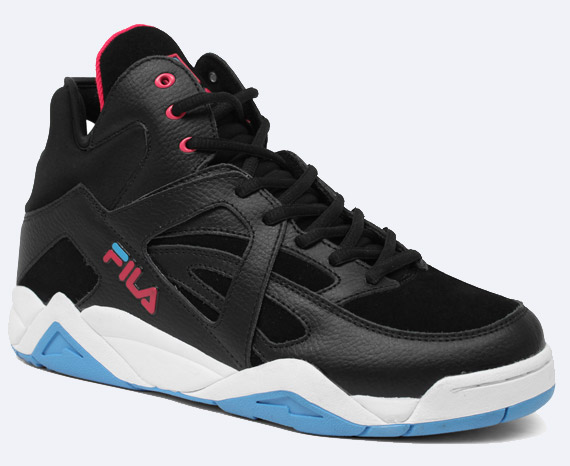