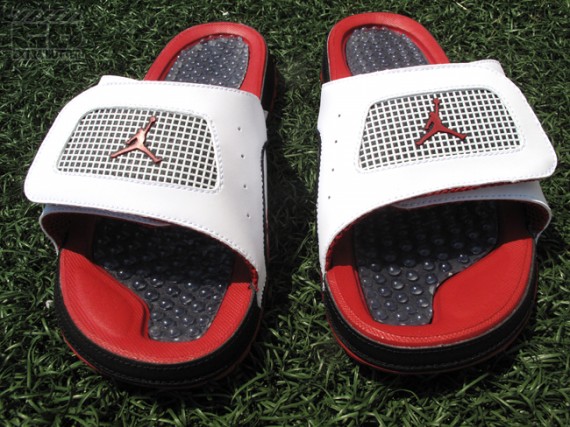 The last time an Air Jordan Hydro sandal released was just before the ‘White Cement’ Air Jordan III Retro in early 2011. About eighteen months later, another red-accented white leather Tinker Hatfield classic is set to arrive as a 23rd anniversary retro, and this time, there’s plenty of warm weather for the accompanying sandal preview. The ‘Fire Red’ Air Jordan IV Hydro takes its name and colorway from the August drop that had Spike Lee’s Mars Blackmon on its heel last time around. Just like August’s Fours, these Hydro 4s opt for a more pristine appeal (along with Varsity instead of the OG F-Red), but you’ll notice in more photos below the absence of a visible Air cushion like the one we admired on the faithfully-tooled Hydro IIIs. Have a closer look, let us know how these compare to the rest of the series and grab yours at JB stockists like Extra Butter.