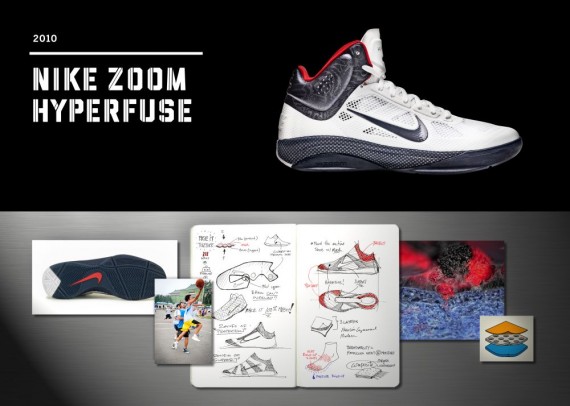 Thursday’s look back at 2008’s Zoom Kobe IV was a reminder of how conventional wisdom can shift right under your feet, and today we get a look at a design and really, an entire fabrication process, that was inspired by the unlikeliest of combinations.  Shane Kohatsu of Nike’s famed Innovation Kitchen noticed that Chinese ballers wore everything from mesh runners to rugged workboots on the nation’s rapidly multiplying outdoor asphalt arenas, then went to work on creating a balance of their collective advantages.  The three-layered technical marvel that is Hyperfuse is born, and in 2010, the Nike Zoom Hyperfuse became the first model to show off its incredible blend of lightweight breathability and strength.  Lead designer Leo Chang noted that the new seamless approach means “You have to draw everything, from the inside out,” so have a look at various sketches and design notes after the jump and let us know where the OG Hyperfuse ranks in the annals of Nike Basketball’s all-time greats.

“It makes you think differently about everything you associate with breathability and durability.”- Leo Chang

What instigates a game-changing innovation? A visit to China by Innovation Kitchen Designer Shane Kohatsu sowed some creative seeds for a new way of looking at sport footwear altogether. Seeing games played on the unforgiving blacktop in China in mesh running shoes and even hiking boots inspired a quest to create a balance of supportive, breathable and anti-abrasion elements that would unlock design entirely. The Nike Zoom Hyperfuse was a definitive solution — a durable composite material composed of three layers: a base layer that contains the foot, mesh that offers breathability and a skin that protects.

All three layers are fused together using heat and pressure to create a level of precision unattainable via traditional cut-and-sew methods. The unibody design results in lightweight, breathable footwear and minimizes seams that can wear on an athlete’s foot.

For lead designer Leo Chang, it meant a shoe needed to be designed in a whole new way. “You have to draw everything, from the inside out — all the lines you don’t see are X-rayed now.” That new approach is a liberation as well. “You can create shapes that you could only dream of with a conventional stitch and turn or overlay a top stitch.”

Leo noticed a resemblance to an older mode of dressing for battle too. “There was something cool about this almost chainmail look — this open, aggressive mesh that you could see through.”

To showcase the purity of the Nike Zoom Hyperfuse’s construction was to showcase the innovation itself. It took to colors in a way that leather just couldn’t — stacking layers and translucent materials meant a richer look than ever before, and the end of the white or black with a team pop color formula entirely.

This was an entirely new design language and one that’s still evolving. The material palette is still being unlocked and it’s getting lighter, tougher, more supple and a little more dynamic season after season. The Nike Zoom Hyperfuse changed everything for Nike Basketball. 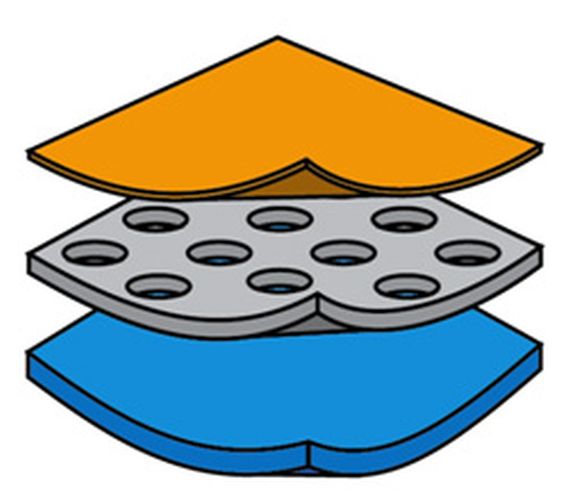