It didn’t take long for Kevin Durant to make his mark in the NBA. Upon entering the league with the Seattle Sonics, the second overall selection of the 2007 Draft proved he was one of the best scorers in the league by dropping 20 a game, and after a change in scenery from the Pac-Northwest to the Midwest in OKC, his scoring marks went up a quarter in his sophomore year. By his third season, Kevin Durant established himself as a shoo-in to the mid-season All-Star Game, and by the fourth, he became a permanent fixture in the Starting roster. As he embarks on a sixth appearance in All-Star Weekend (his fourth overall All-Star Game) this weekend, let’s take a look back at all the sneakers he’s worn during the star-studded affair.

Kevin Durant signed a contract with Nike upon entering the league, but his first signature shoe didn’t arrive immediately. Even when it did, the Zoom KD didn’t gain any real steam until the KD II, but with the low price-point, the Zoom KD line didn’t have that appeal like the higher-priced Kobe and LeBron did. The sudden outburst in popularity in the Nike Zoom KD IV established the KD line as a must-have item rather than a ‘cheaper’ alternative, and the excitement around the upcoming Nike KD V ‘All-Star’ is proof that Durant’s future with Nike is as bright as ever. If you’ve forgotten what he’s worn the in the past, begin this Retrospective feature below. 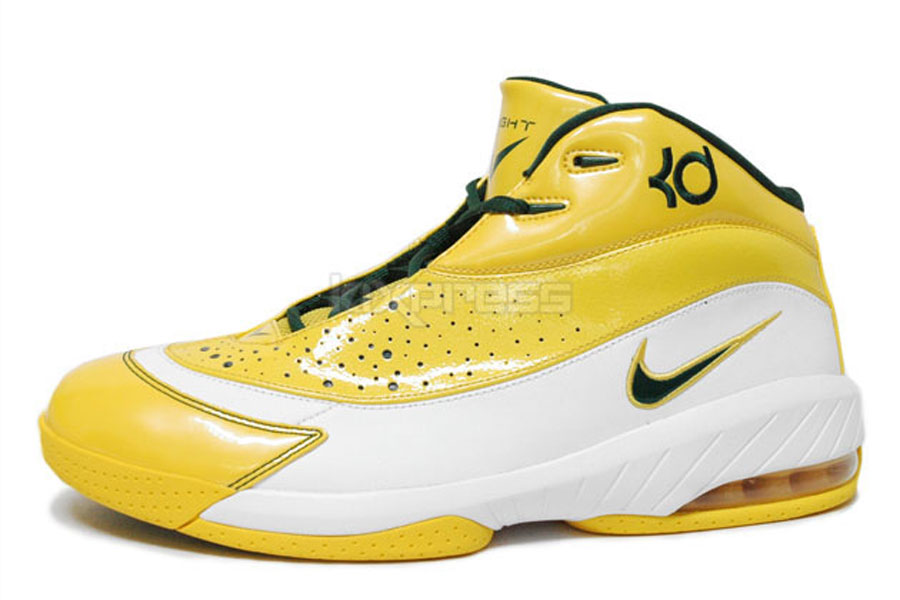 Before Nike officially introduced the Nike KD signature line, Durant was sporting Nike Basketball footwear like the Flight Skool. This PE was made for him to showcase during the 2008 NBA Rookie Challenge, where he racked up 28 points, 8 boards, and 4 assists. Aside from the shoe, the most interesting feature of the shoes is the Yellow/Green colorway, which matched the Seattle Sonics uniforms. The Sonics would move to Oklahoma City in the following offseason. 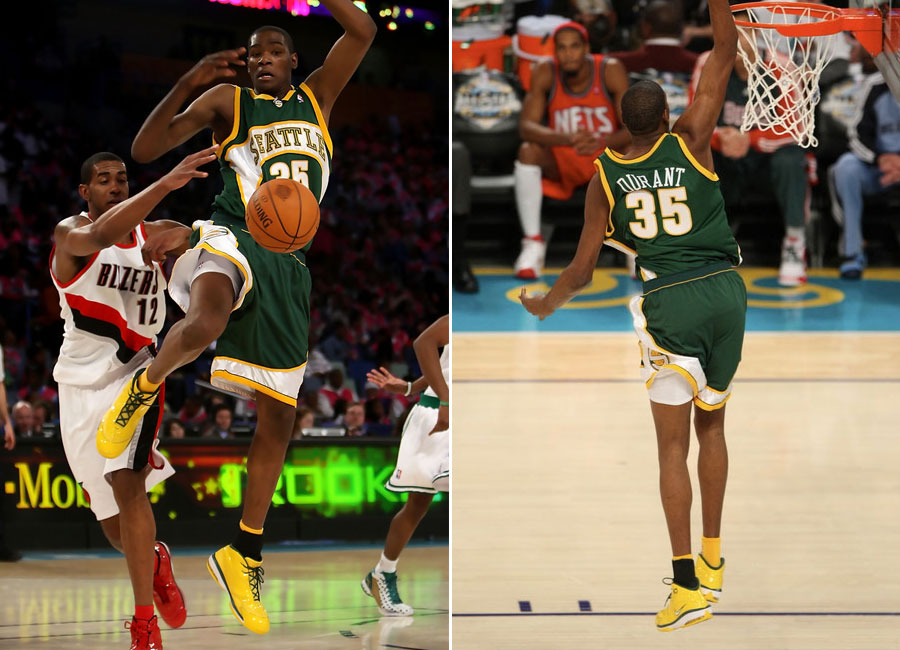 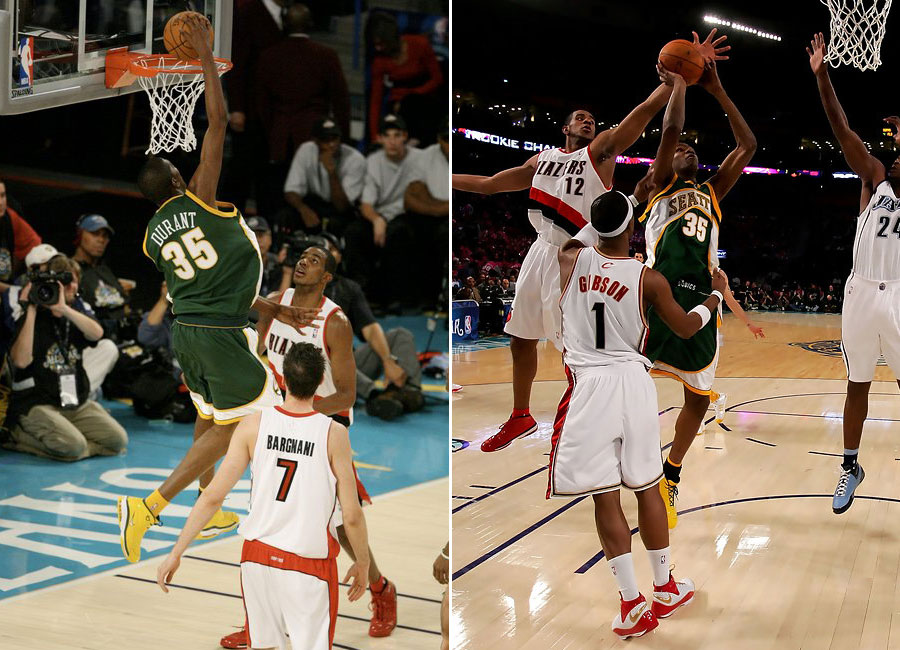 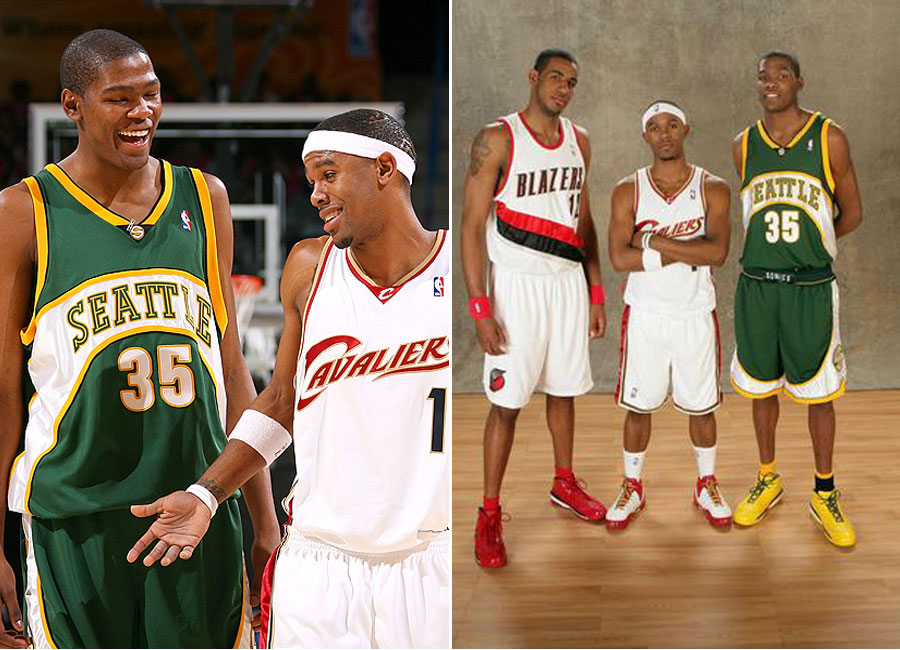 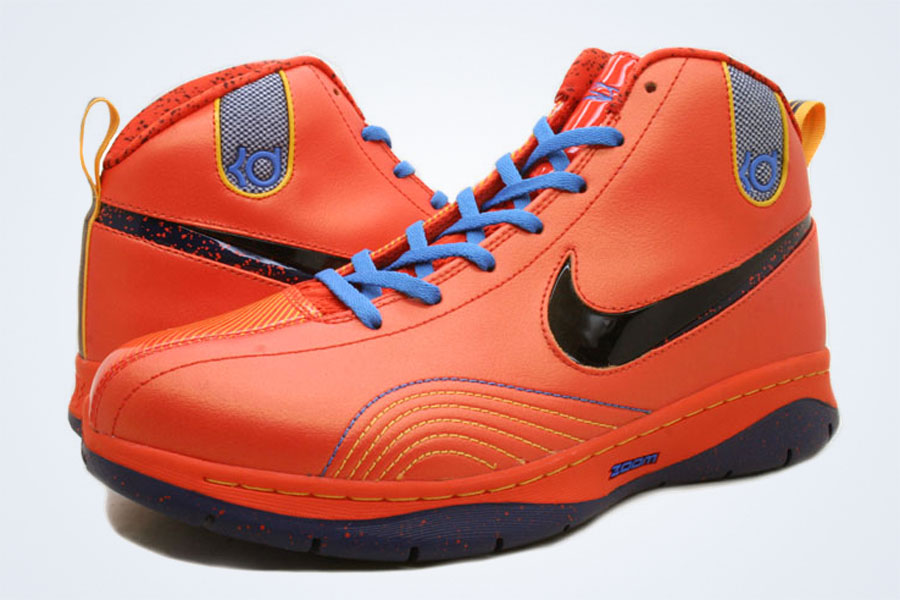 Kevin Durant wasn’t selected to be a part of the Western Conference All-Star Team. Instead, he went on to score 46 points and take home the MVP trophy as a Sophomore, all while wearing the Nike Zoom KD 1. 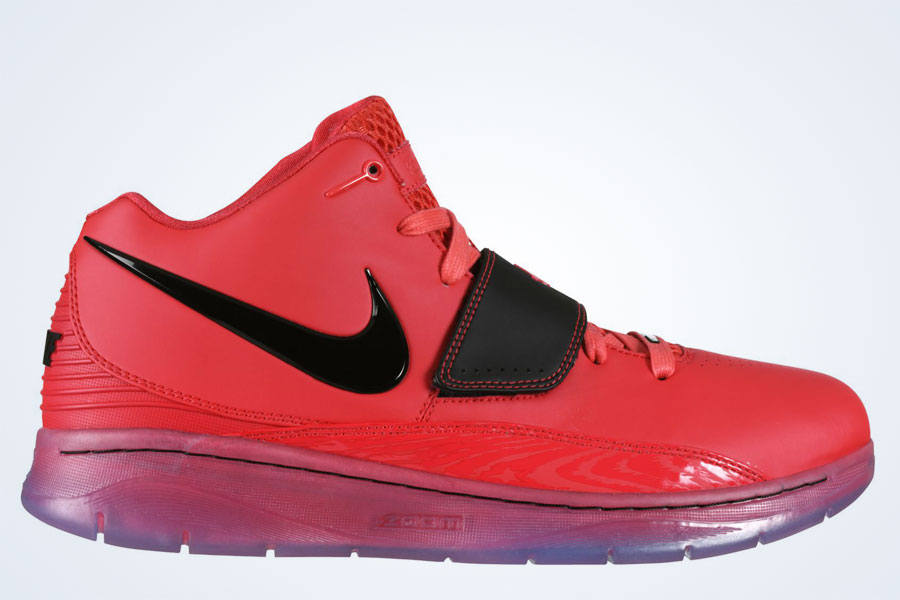 Durant’s first NBA All-Star Game came in Year 3, when the West selected him as a reserve for the big event in Dallas, TX. During the game, Durant wore the Nike Zoom KD II in the ‘All-Star’ colorway, which featured a full reflective upper, translucent outsole, and hardwood detailing on the mudguard. 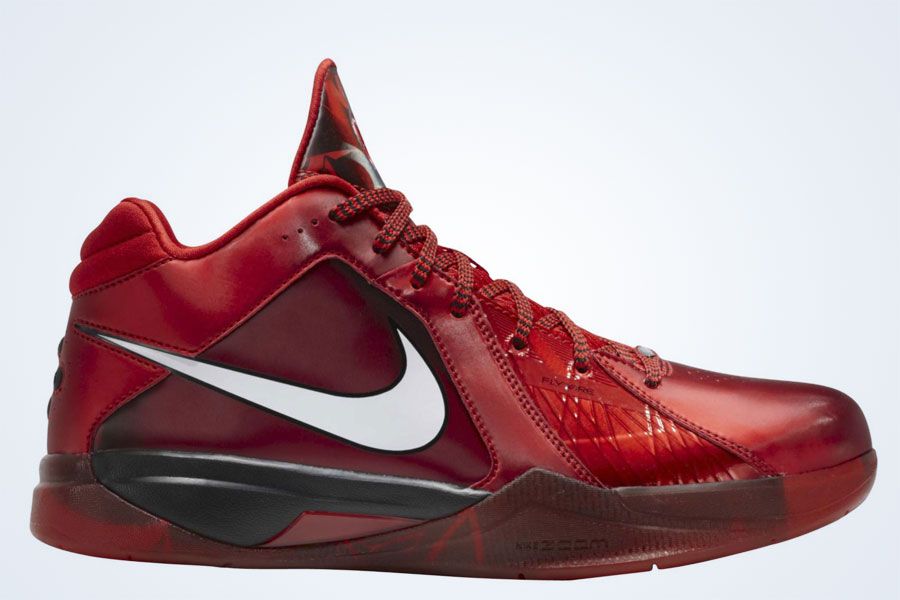 Kevin Durant would represent the Western Conference as a Starter for the first time in his career. While dropping 34 points, Durant wore this daring red colorway of the Nike Zoom KD III. 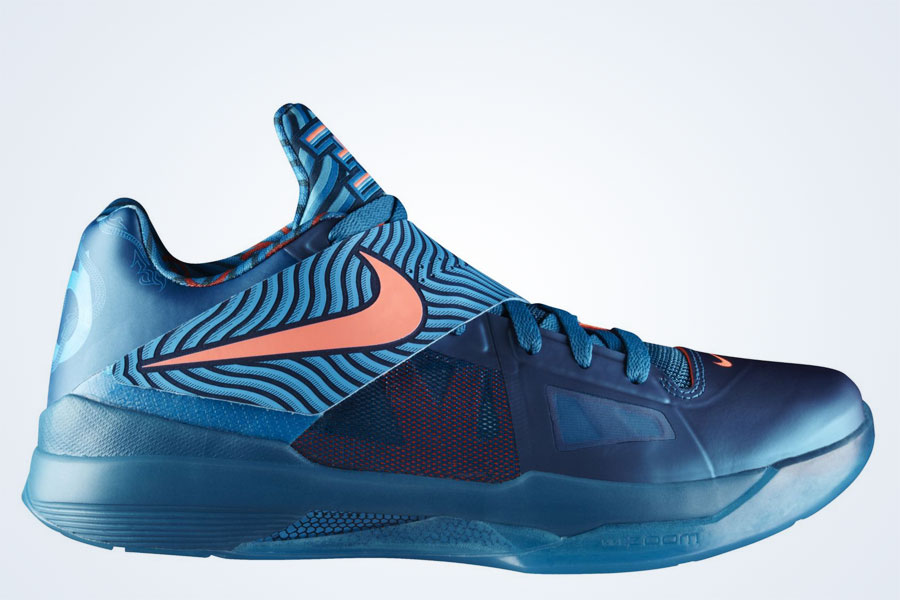 By the All-Star Break, the Nike Zoom KD IV was an incredible hit. He took the court before the All-Star Game to participate in his first-ever Three-point shootout, wearing both the ‘Year of the Dragon’ and ‘Cool Grey’ at the same time, losing to Kevin Love in the final round. Another notable piece of on-court gear was the Nike+ FuelBand, which he wore throughout the entire competition. 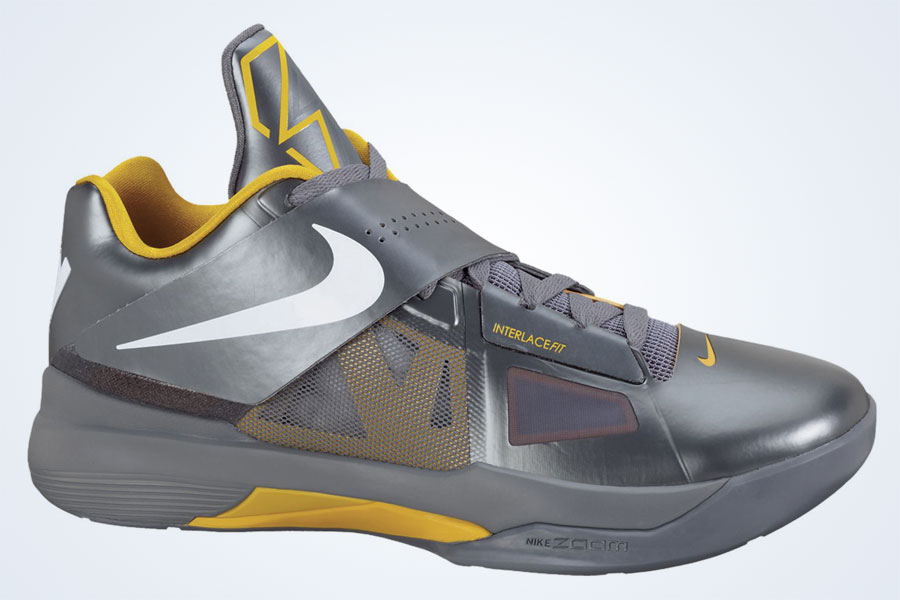 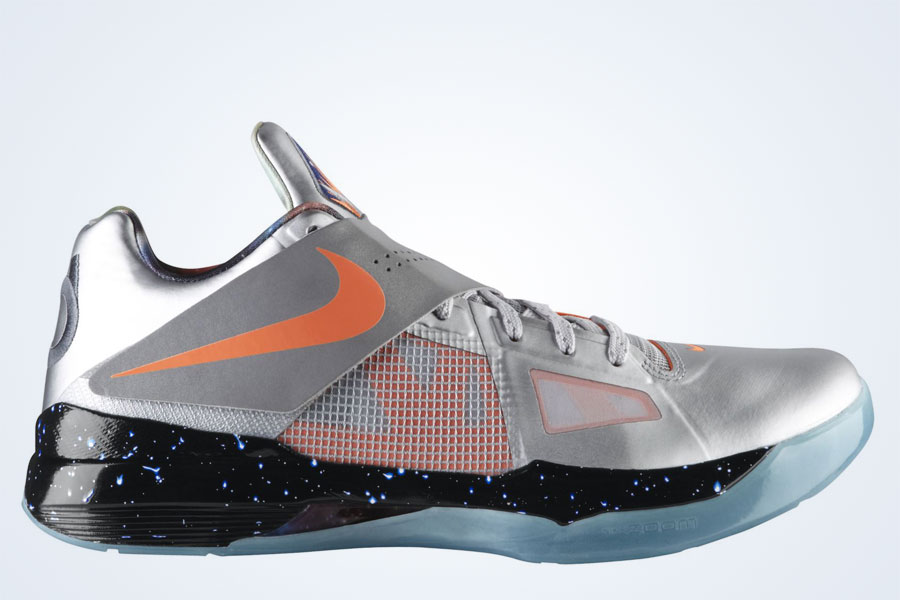 By now, you’ll have realized that Durant’ track record at All-Star Weekend is pretty impressive. Three-straight All-Star nods, an MVP trophy at the Rookie Challenge, and participation in other events have made him one of the big draws for this mid-season event. What would be missing? An All-Star MVP trophy, which he acquired during the 2012 main event.

The NIke Zoom KD IV ‘Galaxy’ also went on to be one of the most sought-after sneakers of the year. Currently, the resale value of this shoe is in the $600-700 range.