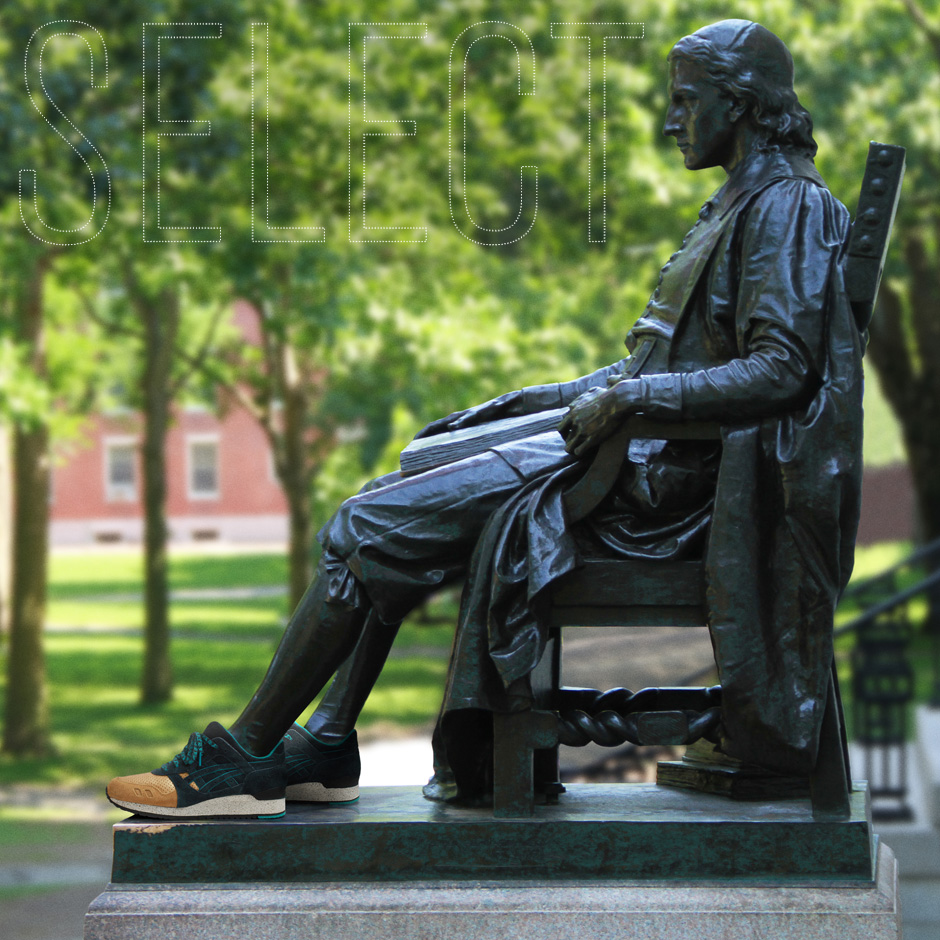 Renowned Boston shop Concepts has a résumé as strong as any when it comes to sneaker collaborations, so it’s hard to believe that with all those shoe designs under their belt, they had somehow never partnered up with Asics until now. Both brands are riding high right now, each enjoying a devoted following that stems more from the overall quality of their products than whatever hype may surround them. Finally, the two have come together, and true to form, CNCPTS has once again delivered an original creation rich with poignant storytelling and carefully considered material choices. It’s not rocket science to take a popular model and slap an appealing color scheme on it, but there’s a fine art to telling a compelling story through your products, and when it comes to that, Concepts are masters of their craft.

Based on an iconic piece of Boston history, Concepts’ take on the popular Asics Gel Lyte III model is one of the most literal translations of inspiration to end product that you’ll ever see. Plenty of sneakers over the years have taken their design cues from other shoes, but when have you ever seen one pulled directly from the feet of a bronze statue? The colors practically blocked themselves, but the challenge of nailing the materials and actual color hues just right required the kind of tasteful finesse that the Boston boutique has become well known for. Like many of you, we were curious how one of the most accomplished collaborators in the game goes about their business, so we caught up with Concepts’ own Deon Point to get the inside scoop on the “Three Lies” Gel Lyte III project and how it all came to be. 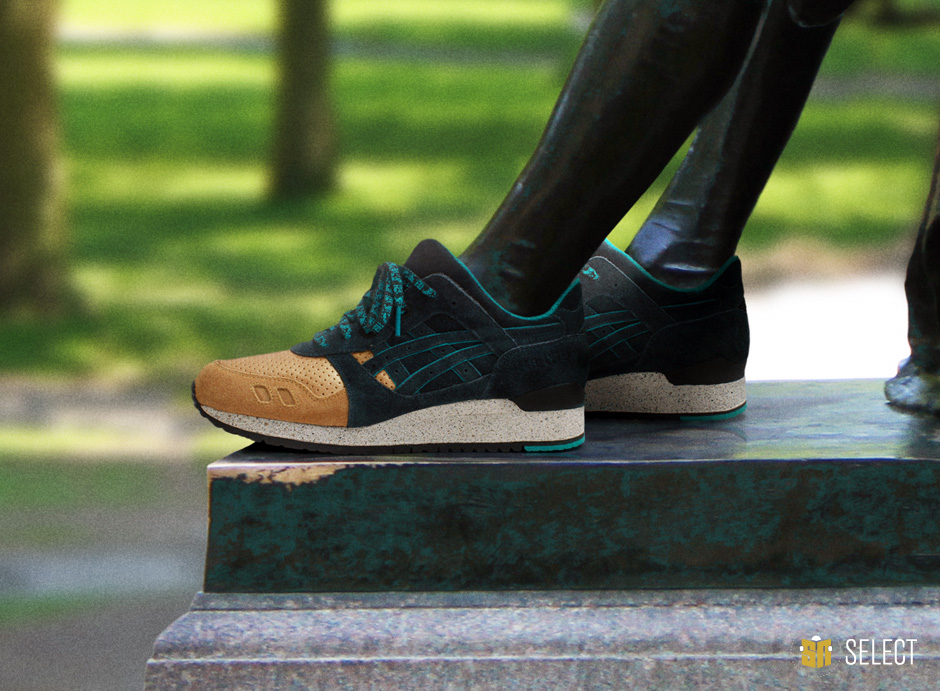 Sneaker News: Over the years, Concepts has been one of the more prolific and successful shops when it comes to sneaker collaborations. You guys really go the extra mile with your inspiration and storytelling, as well as the details and special touches. Can you tell us a little bit about your approach and process when you first sit down to work on a new project?

Deon Point: With any project, you need to assess the benefits of working with each brand. I think once you dissect that, you can develop your approach from there. We never assume a project will sell based on your name or reputation. We are still humble in the sense that we leave nothing to chance. Our packaging, story lines, and inspiration are all carefully thought out before we even start production.

SN: The story behind your new shoe with Asics has already been revealed, but for the sake of those who may have missed it, please give us the rundown.

Deon: The statue of John Harvard has been a tourist attraction forever…while we were drawn to the colors of the statue, the back story is what really caught our attention. The statue is known to students and locals as the statue of Three Lies. There is an inscription on the statue that reads “John Harvard, Founder, 1638.” Ironically, none of that is true. Also the toe box has changed color over the years due to being rubbed for good luck…I’m sure that will carry over to ours as well. 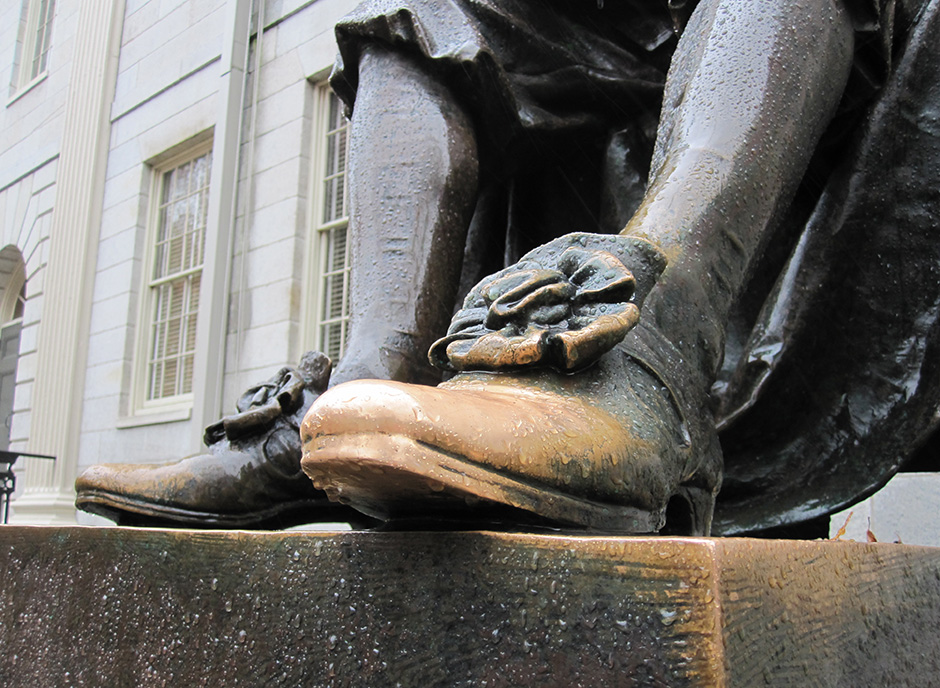 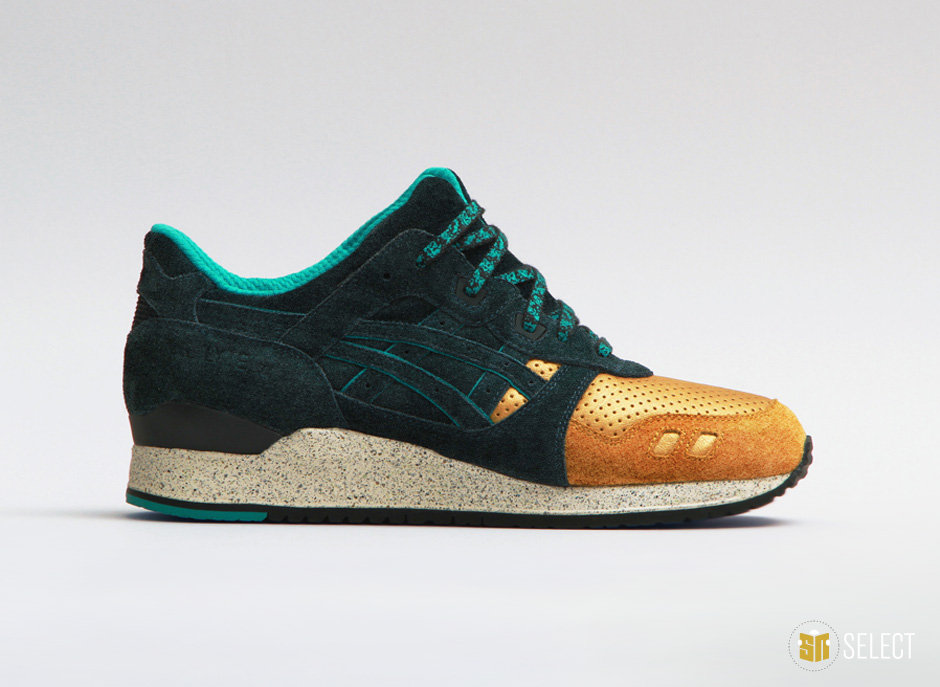 SN: Is there any deeper tie between Concepts and the Three Lies statue or is it more just about repping a piece of Boston?

Deon: Most of projects we work on are much more than just what you see at face value. With this particular idea, we were drawn to the idea of things not being what they seem. We feel that applies to a lot of what we see within the industry. “To be, rather than seem.”

SN: Can you give us a breakdown of the materials used on the shoe?

Deon: Asics always used premium suede so we coupled that with a perforated leather toe box (we felt this would best tell the story),

with a quilted nylon lining and a speckled mid sole. There will be a few lace options as well.

SN: Did you face any obstacles in the design/sampling process before arriving at the final version, or was it smooth sailing all the way through?

Deon: Oddly enough, our first sample was the one we ended up using with some minor tweaking. It was somewhat difficult to capture the bronze used on the toe box, as we combined both leather and suede. Aside from that, fairly smooth. 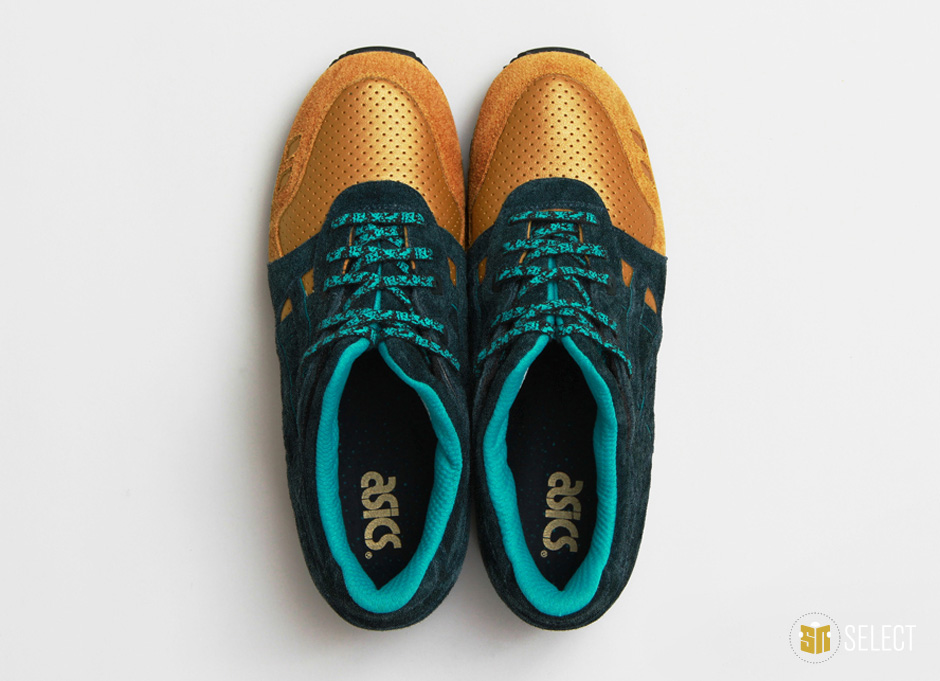 SN: This was your first shoe with Asics. Compared to some other brands, they usually don’t allow collaborators to include much special branding or graphics and those kinds of personal touches that Concepts has become known for. This makes it so it’s all up to the color scheme and materials to tell the story. Did you feel restricted at all in the process and does that force you to change up your approach at all?

Deon: In this particular instance, our concept restricted us more so than Asics. The bronze, speckle, and charcoal are all direct interpretations of the statue itself. We never just throw colors on a shoe and think that’s enough to justify being called a collaboration. Quite a few brands have an ID program that can provide that service.

SN: Concepts’ creativity and originality have spoken for themselves time and time again, but when images of the

Concepts Gel Lyte III first leaked, a lot of people’s first impression was that there are some general similarities to Ronnie Fieg’s “Salmon Toe” version. Obviously, you’re telling a completely different story and the design comes directly from your source of inspiration, but was it ever a consideration for you that people might react that way?

Deon: I think Google can answer that question. Going all the way back to the early 2000’s, BL (Before Lines) color blocking in this particular fashion has been used for as long as I can remember. Air Forces, New Balances, Air Max’s, SB’s and that’s just to name a few. Honestly, I can’t say I pay much attention to what others do, so comparisons never crossed my mind. That said, you can’t take anything from what Ronnie has done with Asics in the States. 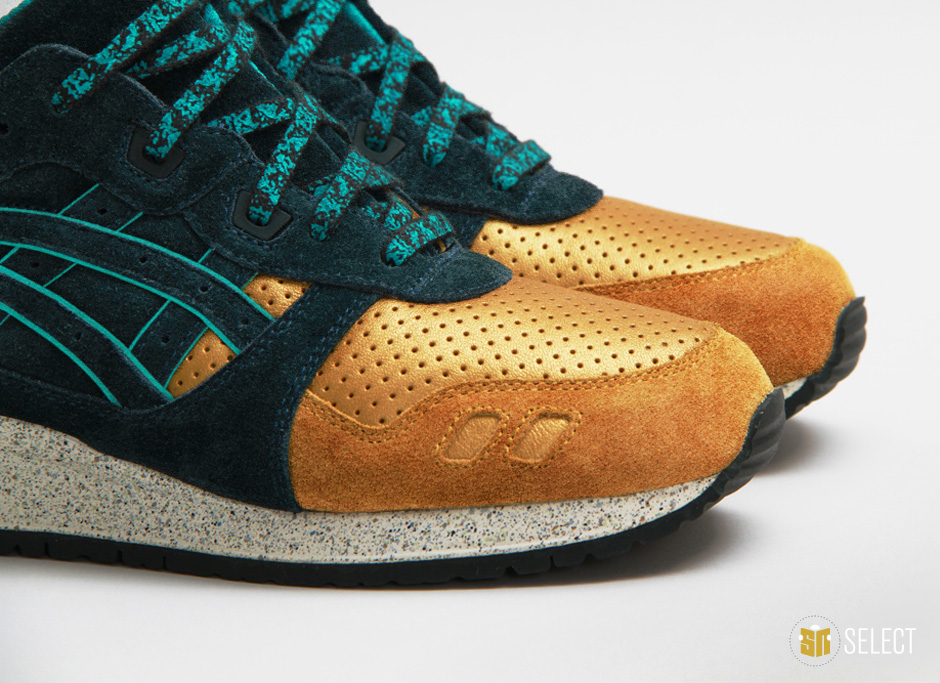 SN: What’s the scene like at the store on the day of one of these high profile collab releases, and how do you maintain order?

Deon: With hundreds of kids waiting for days, it’s always a mess to deal with, but they pretty much maintain order themselves. They are resilient if nothing else.

SN: What are your thoughts on kids buying the shoes on release day only to flip them for more than twice what they just paid for them?

Deon: Its not slowing down, that’s for sure. I don’t understand the time wasted waiting compared to the overall profit, but to each his own. Our regulars take precedent so that’s our main concern above all. 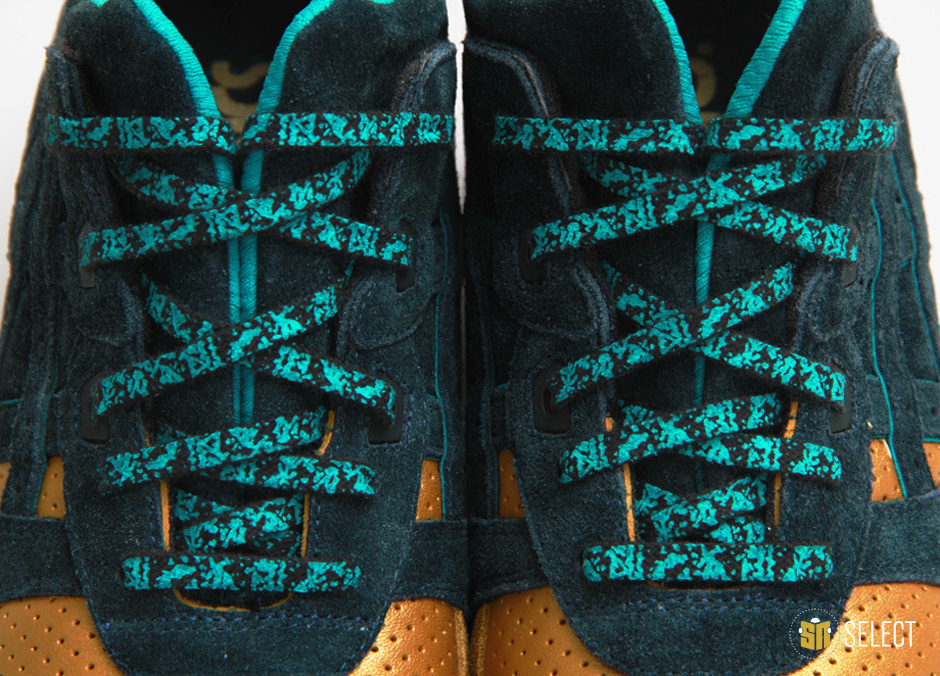 SN: Where does this Gel Lyte III project rank among the other shoes Concepts has done over the years?

Deon: Every shoe has been a milestone for us in some form, so every project means something different. It’s always exciting to work with a new brand.

SN: In another recent interview, you alluded to a 2014 Asics collab. Can you give us any hints about that or any other projects on the horizon for Concepts?

Deon: We have always had tremendous success with our footwear collaborations. In the upcoming months, expect to see more clothing and outerwear projects as well.

A big thanks to Deon for taking us inside the process, and be on the lookout for the CNCPTS x Asics Gel Lyte III “Three Lies” headed to the Concepts shop, followed by other select accounts in the coming weeks. Stay tuned to SneakerNews.com for all the latest on the release specifics.