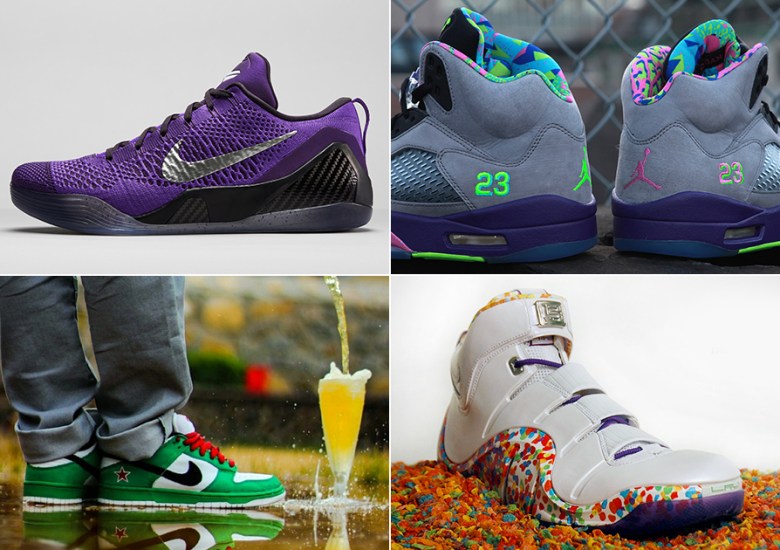 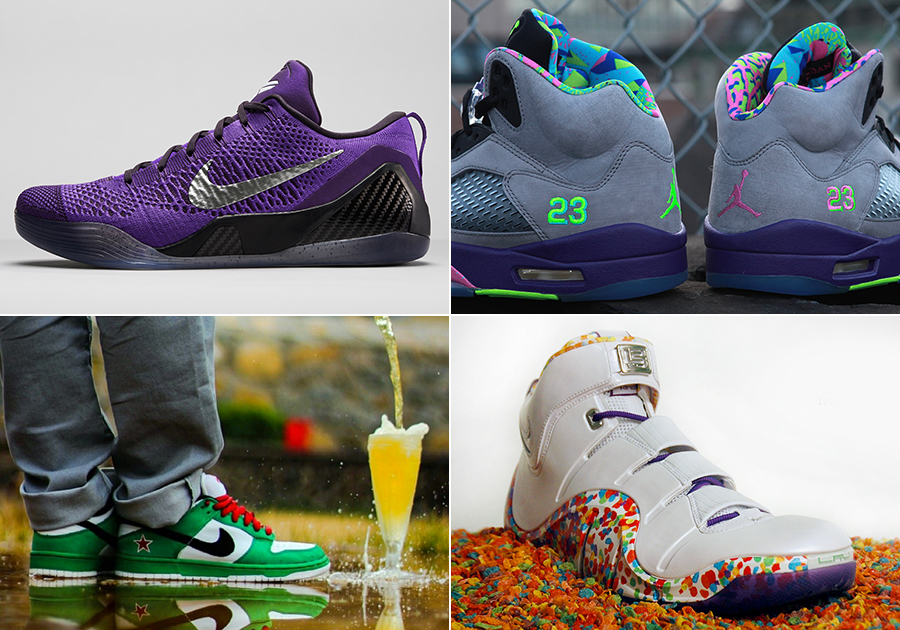 Sneaker designers have pulled in outside sources for inspiration when coloring up a pair of shoes. Perhaps the most memorable one done as an official partnership between two brands is the Nike Zoom KD IV “Nerf” of 2011, in which the limited edition sneaker was packaged in a sick shoe box that doubled as an official Nerf basketball court of portable proportions. However, these team-ups on paper are truly rare because of all the legal issues, costs to obtain rights, and other collateral annoyances that could potentially hinder the production, but that hasn’t stopped brands from presenting their ideas and letting the public decide on their own.

Today’s unveiling of the Nike Kobe 9 Elite Low is the perfect example of a release with a clear inspiration, but with an ambiguous involvement of a second party. While Kobe himself said that an upcoming sneaker of his would be inspired by the King of Pop, Nike never made any mention of Michael’s name. This isn’t the first time an anonymous yet obvious connection has been presented to us before, right? Does Nike LeBron IV “Sugar Snack” or Reebok Shaq Attaq “Friends of the Program” ring a bell? Check out this quick rundown of some iconic sneakers unofficially inspired by pop culture icons and let us know if you have any personal stories for any of the shoes. 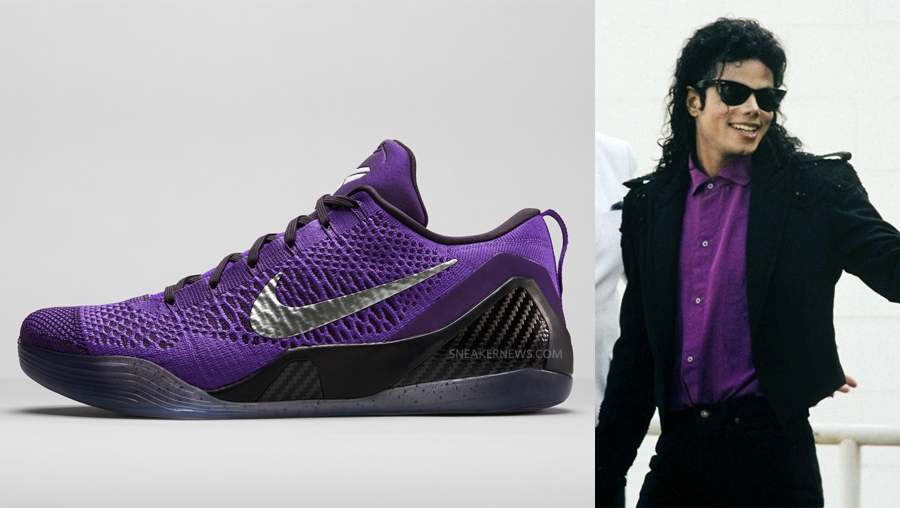 Today’s newly unveiled Kobe 9 Elite Low is indeed inspired by the King of Pop. The graphic of the lunar surface as well as the rich purple colorway (one that Michael himself has often worn) is a clear nod to the late Jackson. What’s more is that Kobe himself said the shoes were inspired by the music icon, and not Prince. 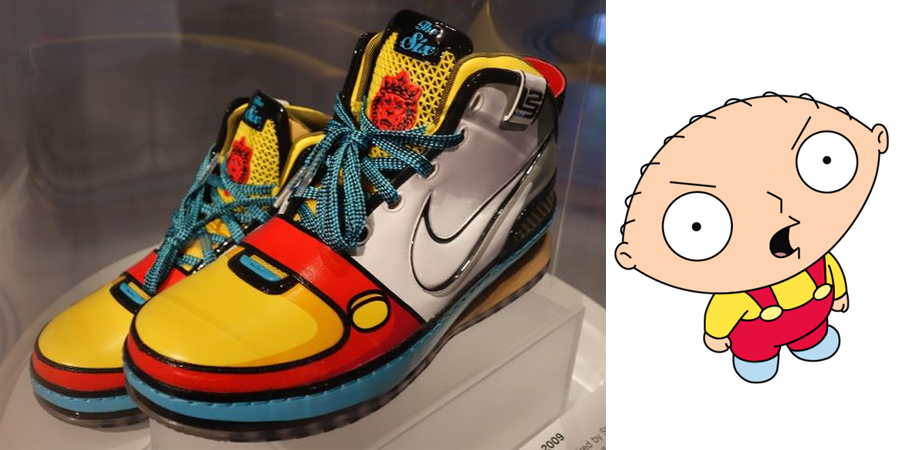 Like many others in his age range do, LeBron James went through his adolescent and early-adult age phases in the Family Guy era of cartoon comedies. Arguably the most recognizable character is the talking, foul-mouthed Stewie, who serves as the design inspiration of the shoes. However, the nickname is unofficial and the shoes never actually released to the public. Blast! 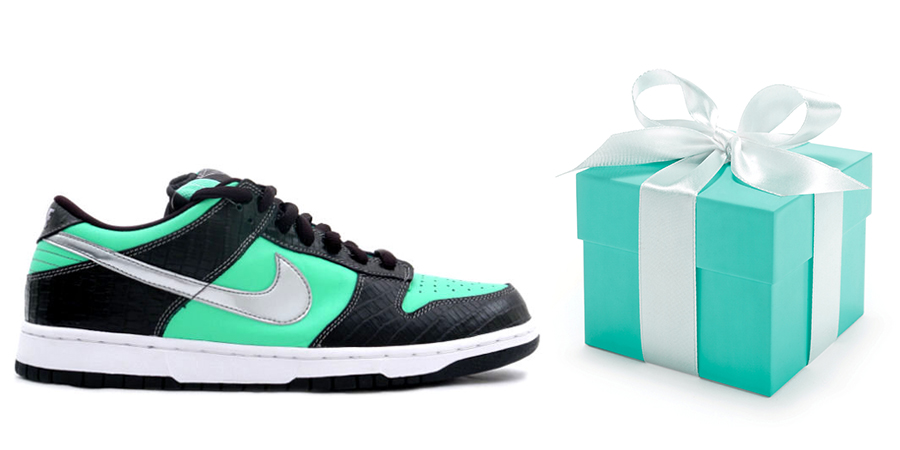 In 2005, Nike SB tapped Nicky Diamonds of skate brand Diamond Supply Co. to color up a pair of Dunk Lows. It is more than obvious where his idea came from and since its release, these shoes are referred by the name of said brand rather than the skateboarding clothing label. To this day, the brand synonymous with extravagant engagement rings wants nothing to do with this legendary sneaker release. 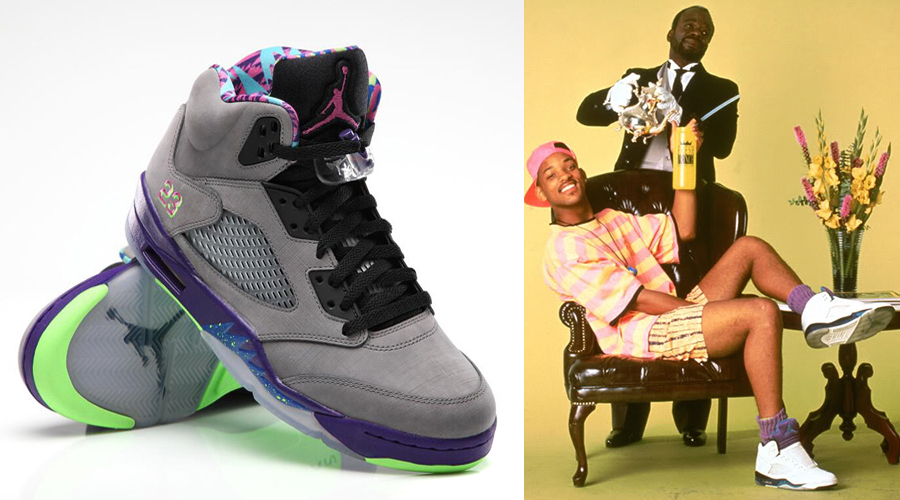 The Air Jordan Vs place in pop culture is perhaps best highlighted by the early 90’s sitcom known as The Fresh Prince of Bel Air. Will Smith, the show’s lead character, is seen with a pair of the V in the opening credits, and in 2013, Jordan Brand revisited that bit of trivia with the “West Coast graphics” without explicitly mentioning the defining television show. Well played. 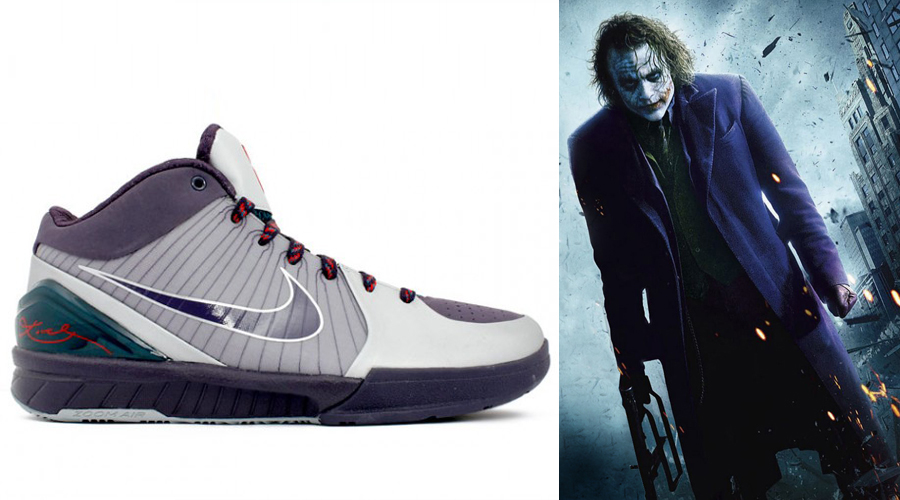 The next selection is not just one particular release, but a string of sneakers that continues on today. “Chaos”, which debuted in the Nike Zoom Kobe IV, is a nod to the DC Comics villain The Joker portrayed by the late Heath Ledger. Kobe found The Dark Knight film thrilling and his affinity for the antagonists relentless approach to the task at hand has translated into some amazing Nike Kobes (the Masterpiece being the most recent). 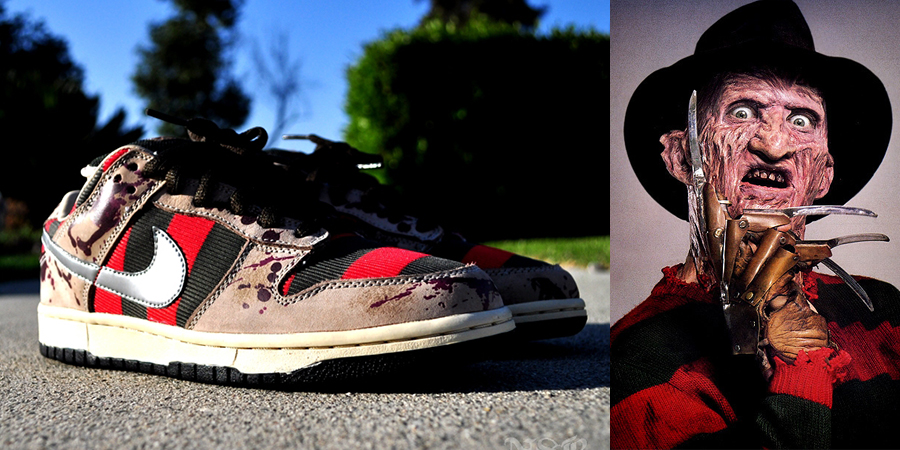 Nike Skateboarding probably frequents outside sources more than any other brand or category within Nike. This macabre colorway was too obvious an homage to the bad guy from the Nightmare on Elm Street franchise, and so the brand had to nix it as a whole. 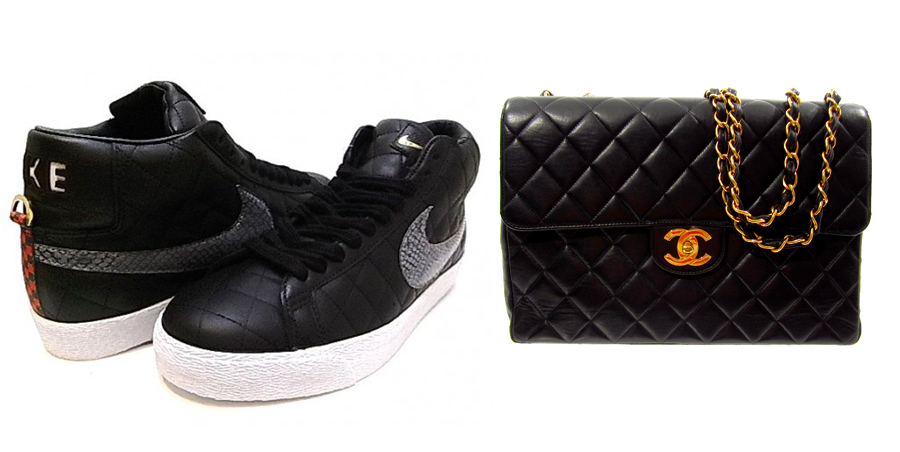 Supreme’s take on the Nike SB Blazer was yet another display of high-end meets gritty streets. The quilted upper, green/red heel-tab, and golden accents was their take on classic quilted handbags from the likes of Gucci and Chanel, in sneaker form. Many consider this trio of Blazers as Supreme’s best work with the Swoosh yet, and deadstock pairs command a hefty amount. 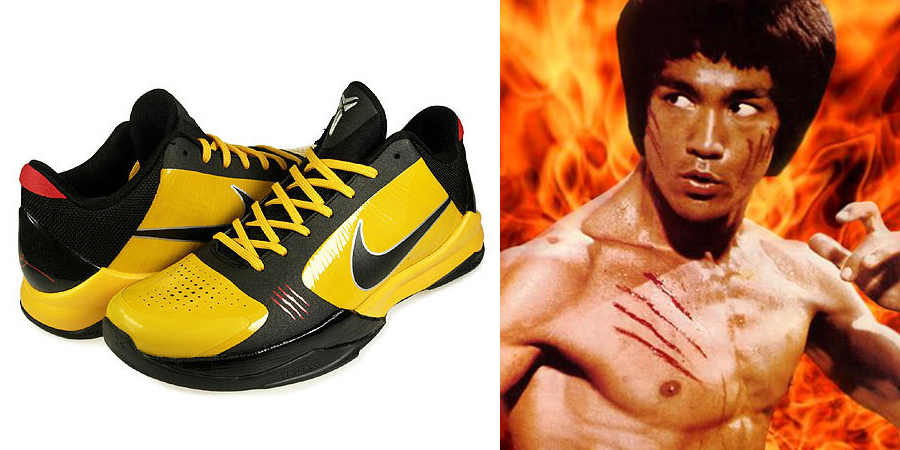 Kobe’s a big Bruce Lee fan, and in late 2009, it showed. This amazing release is a nod to Game of Death and Enter the Dragon – the color way coming from Lee’s notable apparel in the first movie and the four scars at the forefoot from Lee’s climactic fight in the latter. Again, Nike never billed these as an official homage to the movie star. 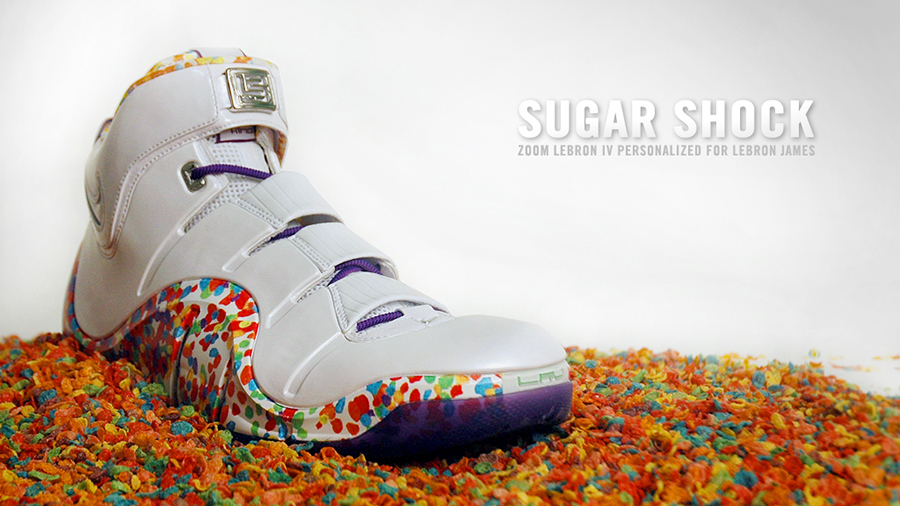 In their description of this classic shoe, Nike calls the multi-colored graphic a “Sugar Shock”. Of course, that’s in reference to Fruity Pebbles – a personal favorite of LeBron James’. Nike created a very limited amount of these classics, and although Nike never called these the “Fruity Pebbles”, we all knew what it was in reference to. 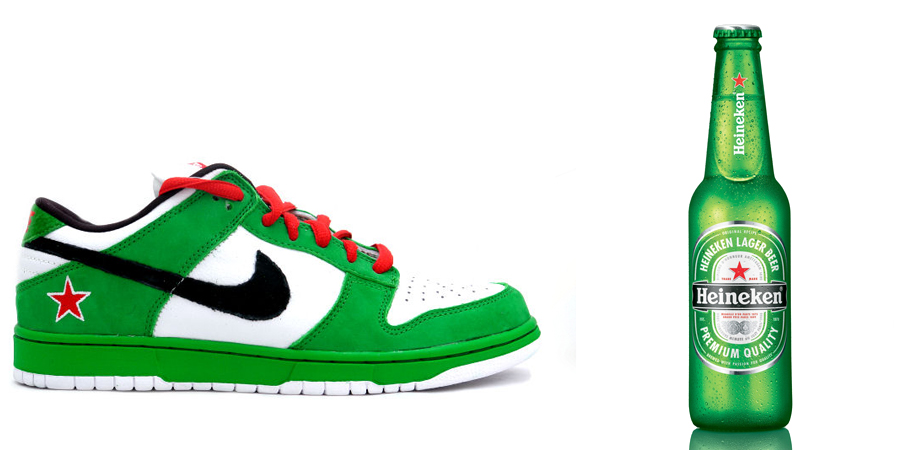 Beer has been a big inspiration for many classic SB Dunks releases of the past. Most notable is 2003’s “Heineken”, which features the signature green and white colorway with the red star on the heel. Although the Dutch beer had no participation in this release, “Heineken” has become one of the most popular sneaker colorways of all-time. 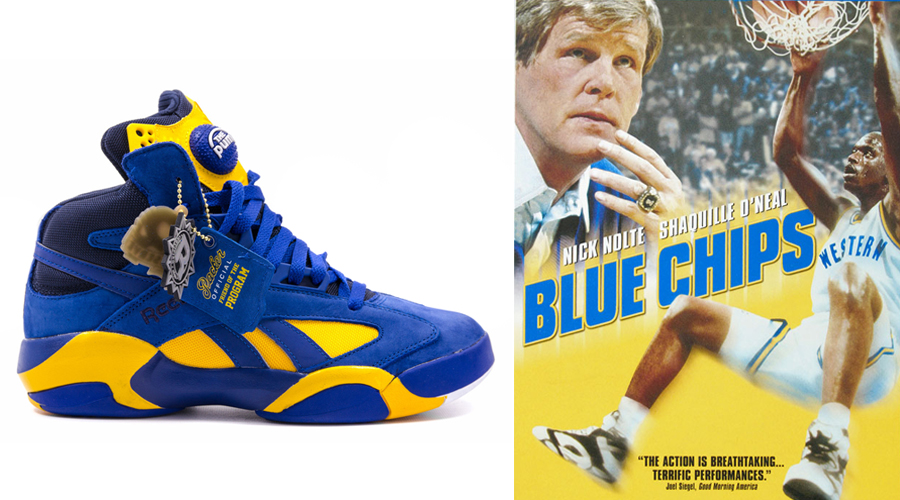 Packer Shoes created this special Shaq Attaq colorway on the same year Blue Chips was celebrating its 20th Anniversary. Shaq also starred in the movie, and is seen wearing the Attaqs in the film’s official poster. Coincidence? Not a chance, but nobody at Reebok will admit that!