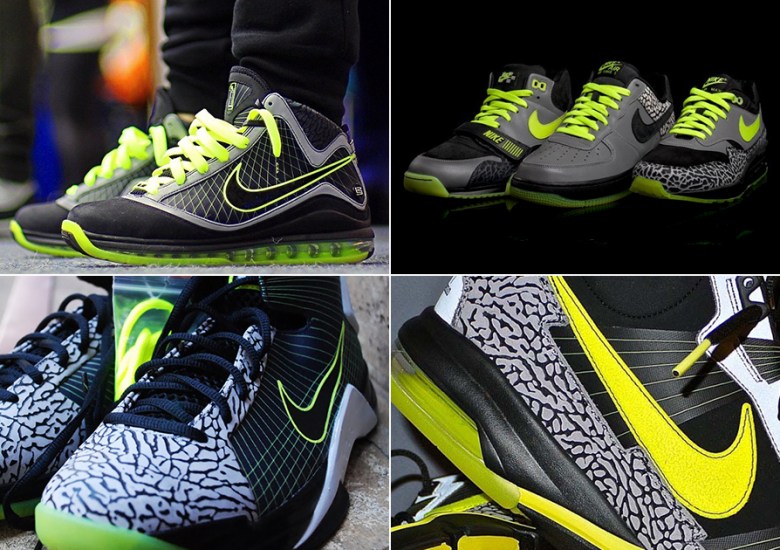 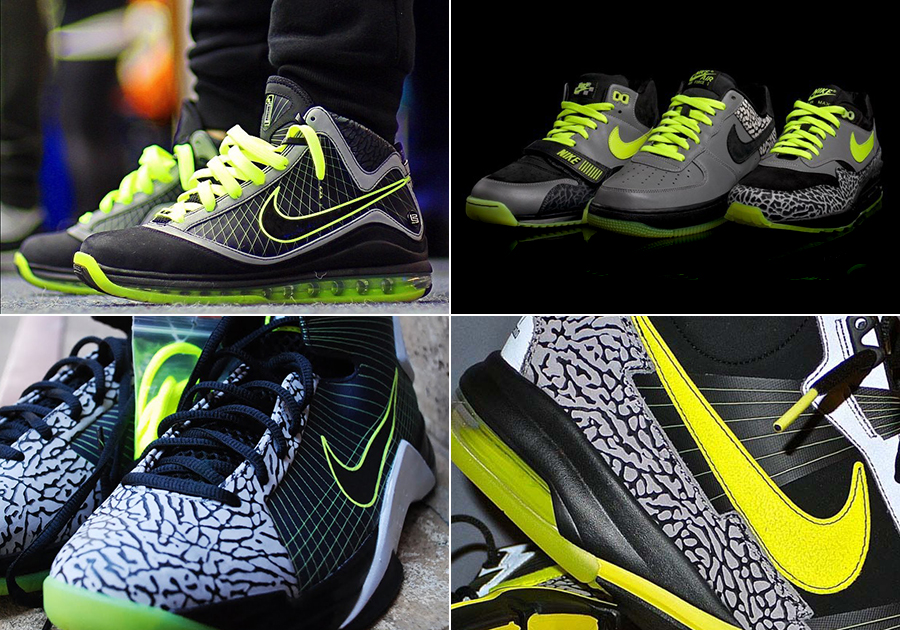 When thinking about the rare sneaker samples that had collectors in the frenzy over the last few years, the name of DJ Clark Kent immediately comes to mind. In 2009, the Brooklyn-based producer and DJ got the opportunity to collaborate with Nike for a special release commonly referred to as the “112 Pack”, which features the Air Force 1, Air Max 1, and Air Trainer 1 dressed up in an incredible combination of Volt tones, Elephant Print, and Reflective panels. The three details are indeed honored figments of legendary Nikes of the past, but to see them all together at once? Gotta give credit to Clark for that.

Sadly, most of the coveted 112 joints were never brought to retail. After the initial triplet in 2009, only the Hyperdunk in 2009 as well as the Nike SB trio (SB Dunks and two P-Rod Highs) hit store shelves. In between those releases is a series of great Samples – mostly LeBrons and Trainers – that have the power to legitimize any sneaker collection out there. Truth be told, there’s probably a lot more “112” out there that Clark himself and a select few know about, so check out this history of known “112” samples penned by DJ Clark Kent and let us know which of these you either want badly or own for yourself. 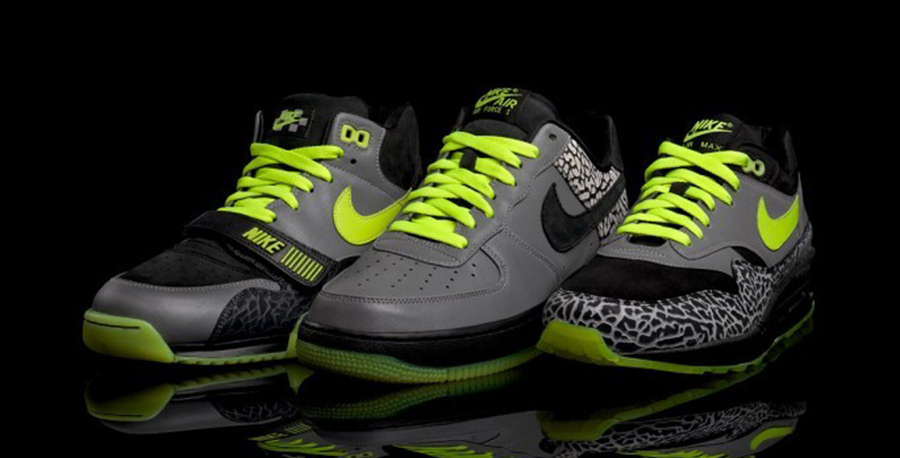 In 2009, Nike Sportswear teamed up with Brooklyn-bred DJ Clark Kent that amounted to one of the most legendary collaborations of the 21st Century. While elephant print, reflective-3M, and the bright Volt were all part of Nike’s archives from the late 80’s and early 90s, Clark brought the three together on the Air Max 1, Air Force 1, and the Air Trainer 1. 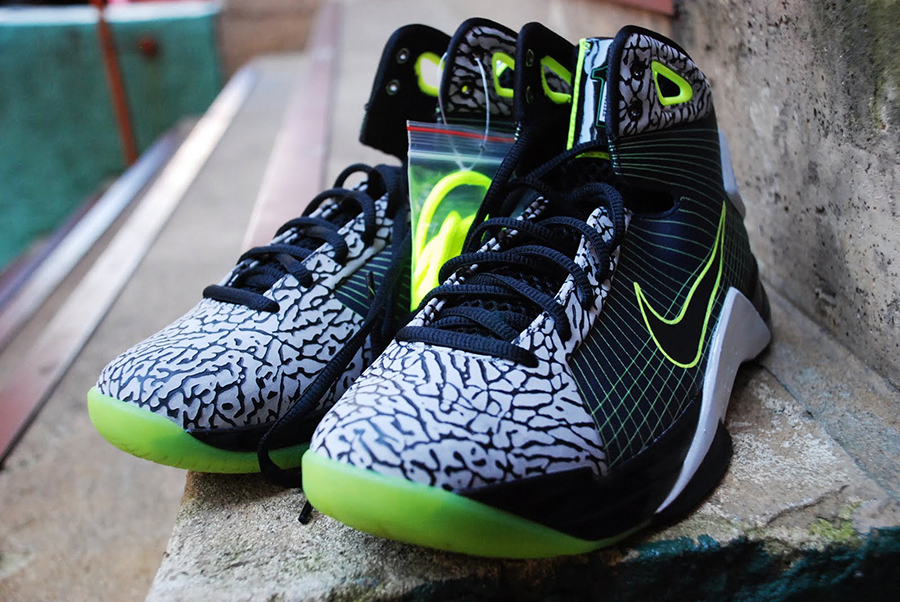 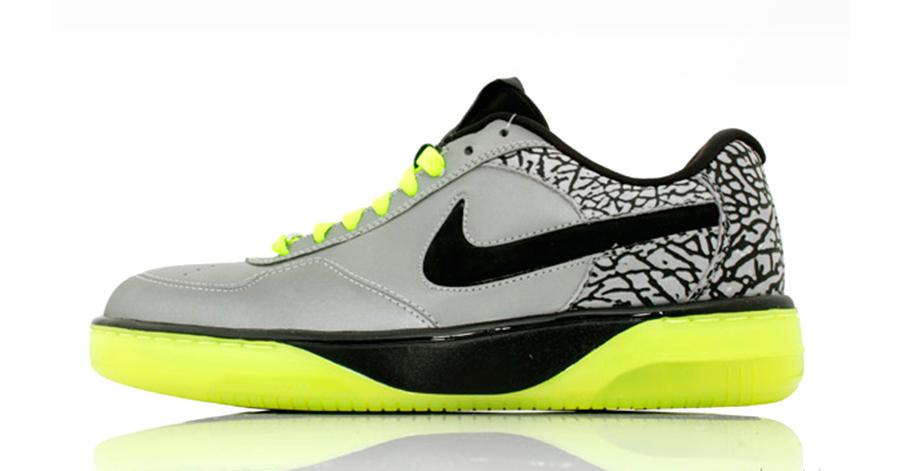 DJ Clark Kent’s a lover of Air Force 1s and his collection of the NSW darling is certainly one of the best out there. A sample colorway of the Air Force 25 Low (yeah, we blocked it out of our memory too) was created, but the shoes never released. 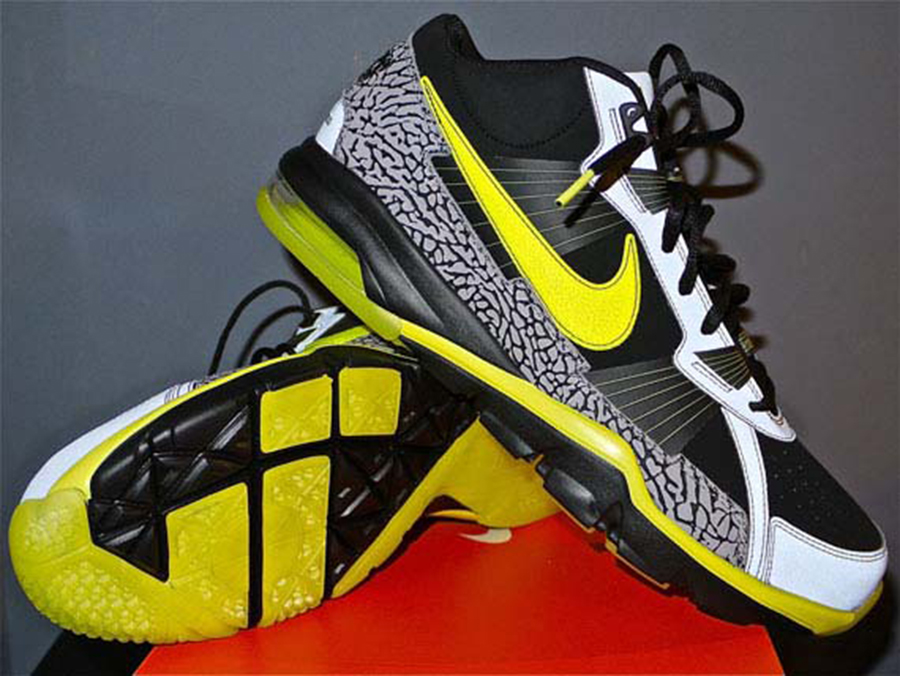 The revamped Air Trainer SC, known as the Trainer SC 2010, debuted in early 2010. Clark got the opportunity to give the shoe a 112 spin, but like the Air Force 25 Low, the shoes never released. 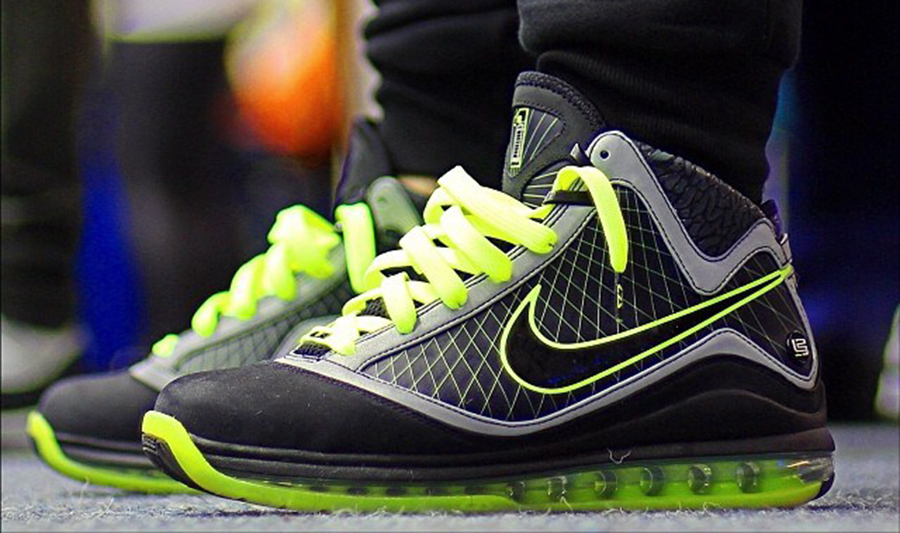 Not much later, a “112” version of the popular Air Max LeBron VII surfaced. The shoes were never released and were exclusively a Friends and Family affair, which meant if you weren’t categorized as either one of those two, you had to shell out a ton of dough on eBay. Seeing a trend here? 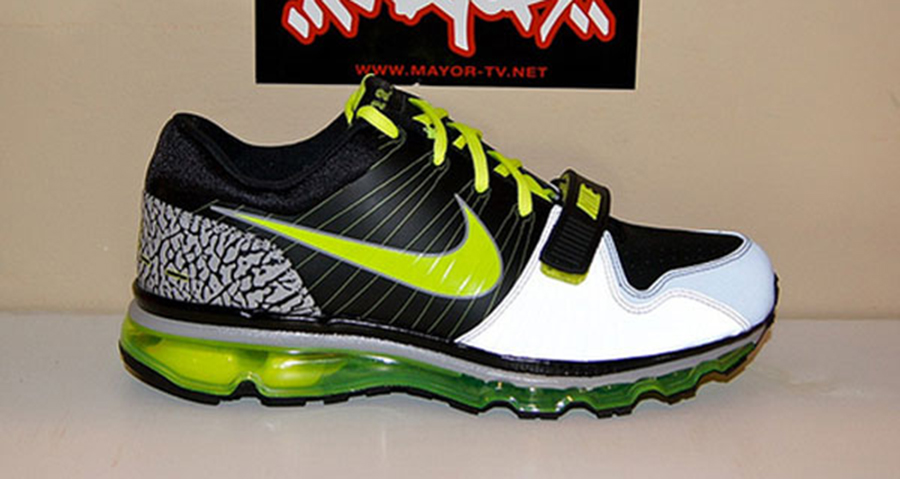 This massively underrated hybrid sneaker called the Air Max Trainer 1+ 360 was made for 112 color-blocking. Reflective at the toe, elephant at the heel, and Volt on the Air unit made these quite the visual treat. 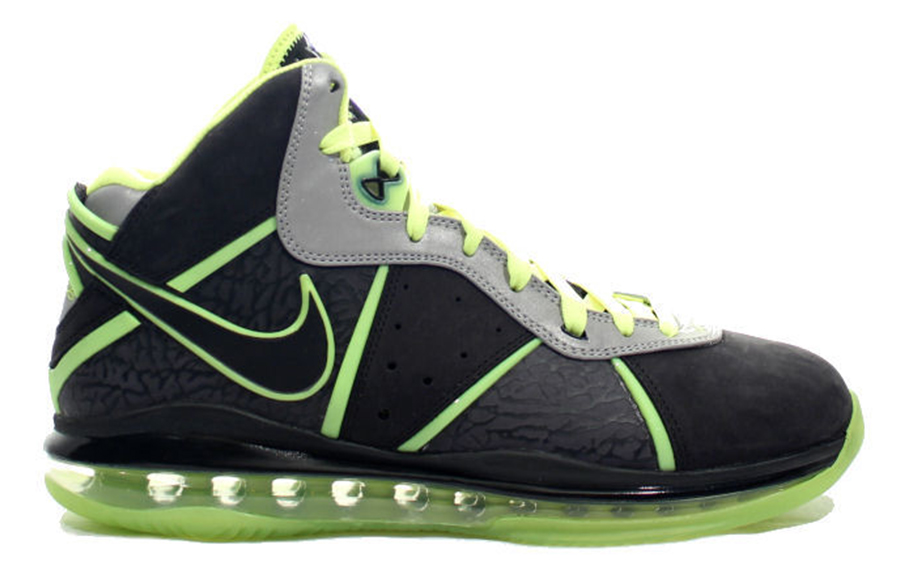 Another “in-crowd” pair. The Nike LeBron 8 V.1 (if you can’t remember that far back, there were three versions of the LeBron 8) mixed in grey suede, elephant print, reflective uppers, and Volt for one of the most sought after Samples. 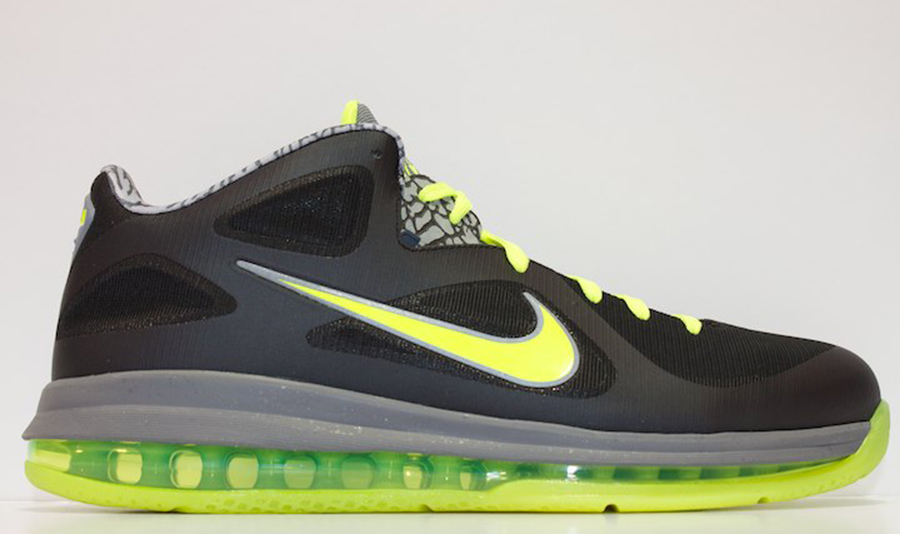 Surprisingly, the LeBron 9 was never given the 112 treatment. Instead, the Summer-time Low version underwent the procedure – the first “112” colored low-top LBJ shoe. 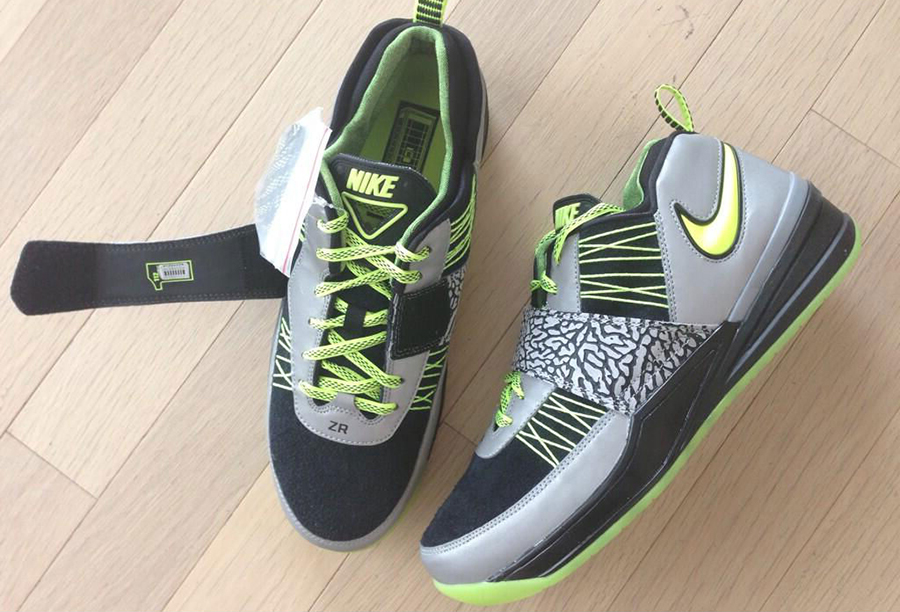 Since the LeBron 9 Low, we’ve yet to see another LeBron “112” (unless Clark has some secrets he’s not telling us). Instead, his vision was brought over to the trendy Zoom Revis. 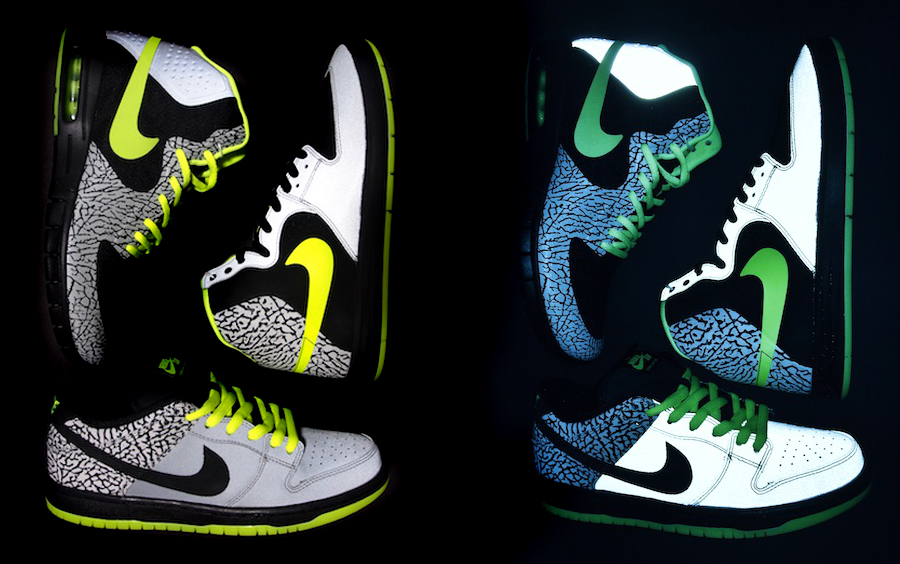 A trio of Nike SBs

Finally, Nike decided to bring the 112 theme back to retail. They did it with a trio of Nike SB releases – a SB Dunk Low, P-Rod 7 High, and the P-Rod 7 Max Hyperfuse.