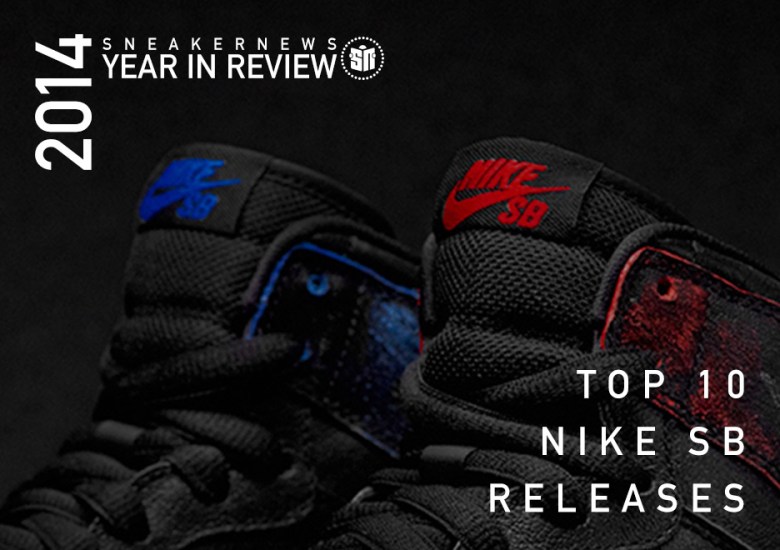 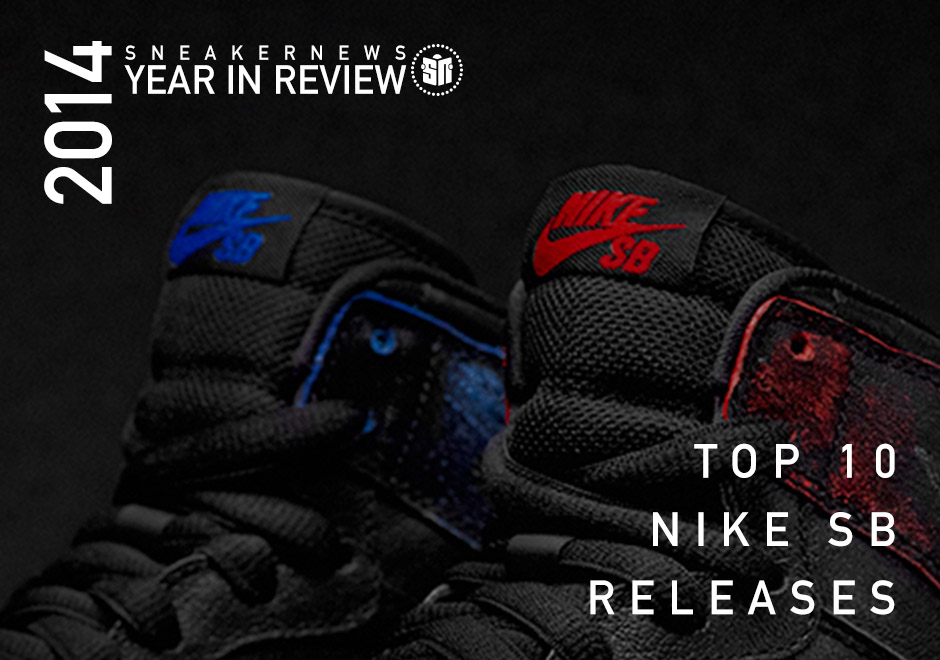 The Nike SB category may not be the unstoppable juggernaut of collectible kicks it once was, but there are still plenty of worthy efforts coming forth to keep the fire burning. All these years since Nike Skateboarding exploded onto the scene, their marquee model, the Dunk, is still going strong and delighting its devotees with a wide variety of intriguing new versions. Combined with their signature models and promising new entries into the arsenal like the recently introduced Free sole skate shoe, SB still has the skate game well-covered on both the performance and style ends. Keep reading to see which of this year’s offerings found their way into our Top 10, and check back for more from the Sneaker News 2014 Year in Review. 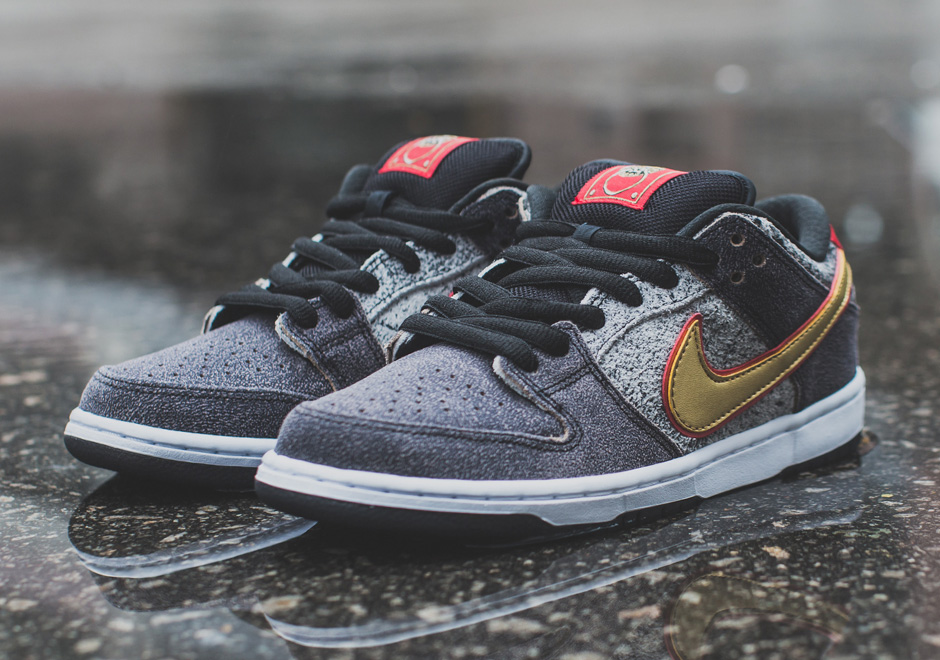 Nike SB tapped into the culture and architecture of Beijing using materials inspired by the city’s brick courtyards and stone alleys and featuring some additional touches of gold on the Swoosh and the special tongue labels. 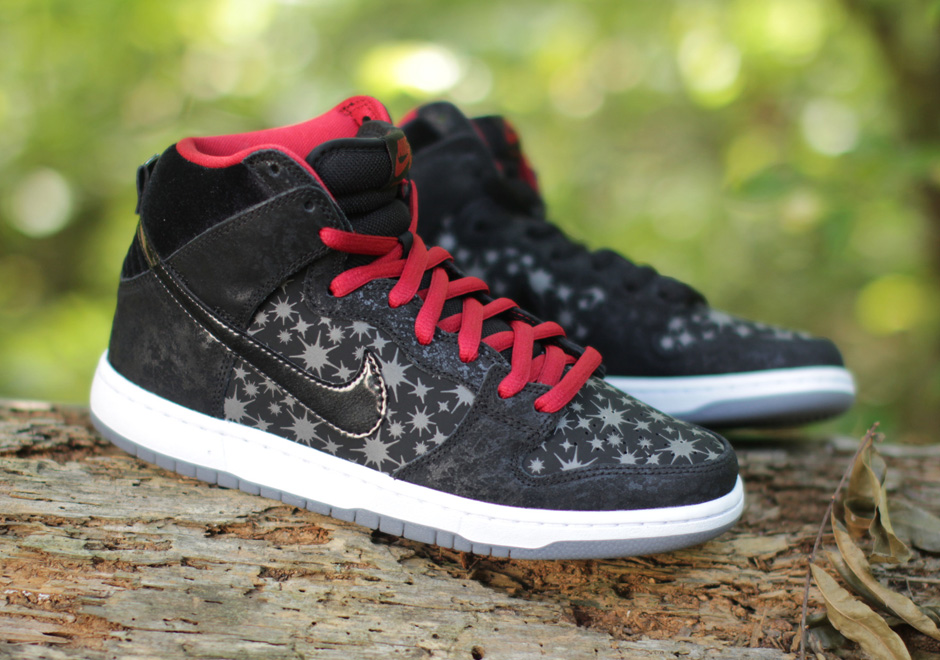 LA shop, Brooklyn Projects, followed up last year’s “Walk of Fame” Dunk Low with another nod to the city’s celebrity culture. The “Paparazzi” High version used reflective accents to capture the essence of the non-stop flashing cameras going off all over the city at any given moment. 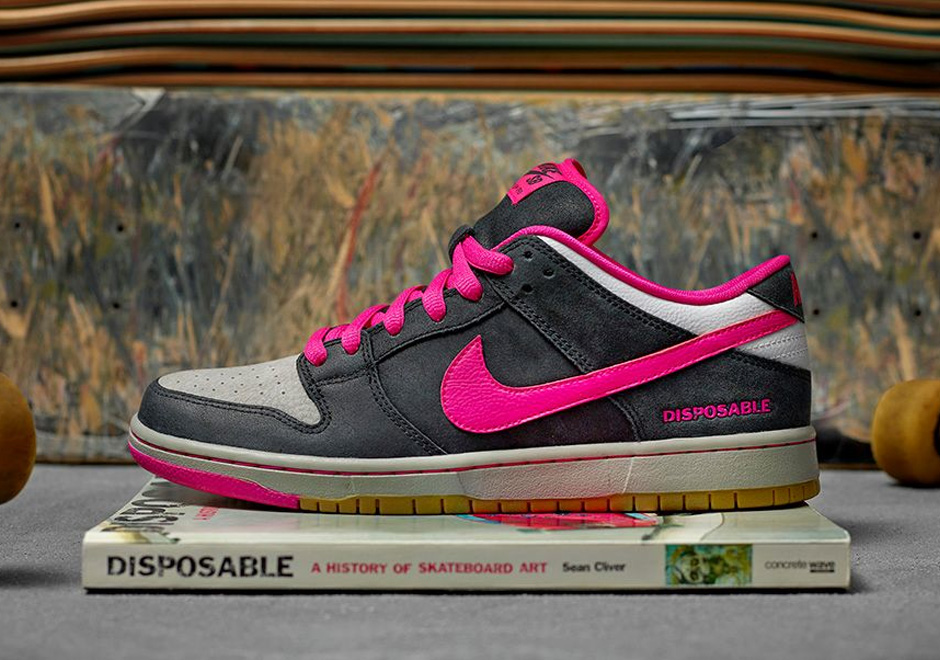 Nike SB celebrated the 10th anniversary of Sean Cliver’s book, “Disposable: A History of Skateboard Art” with a special edition of the Dunk Low featuring a color scheme inspired by the book’s cover and “Disposable” branding on the heels. 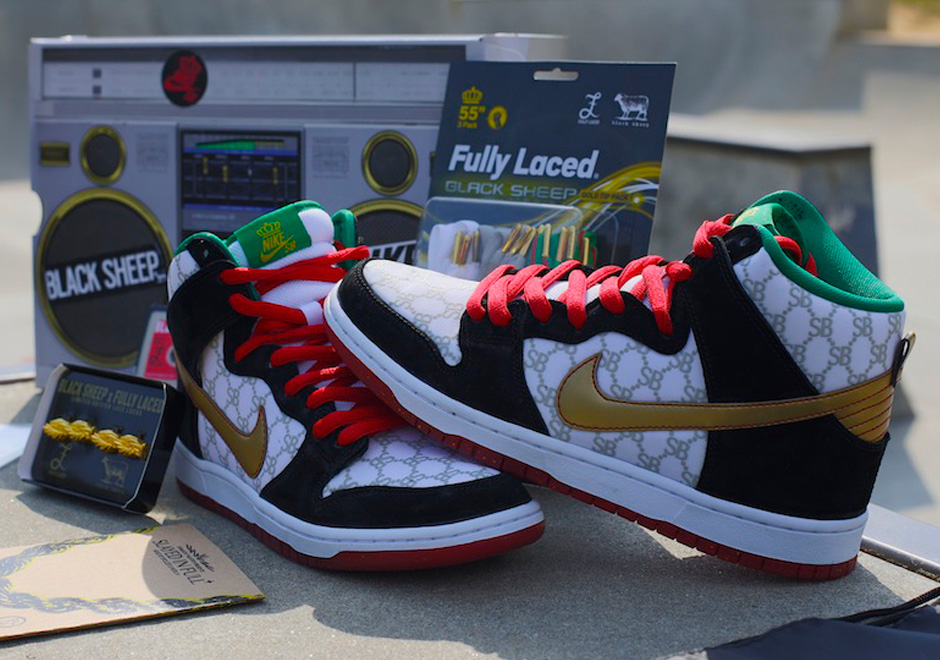 North Carolina’s Black Sheep swung for the fence with their Dunk High collab taking inspiration from Eric B. and Rakim’s Paid In Full album cover (specifically the custom Gucci motif). Unfortunately the release was eventually cancelled for legal reasons, but not before some pairs managed to make their way out to the public. 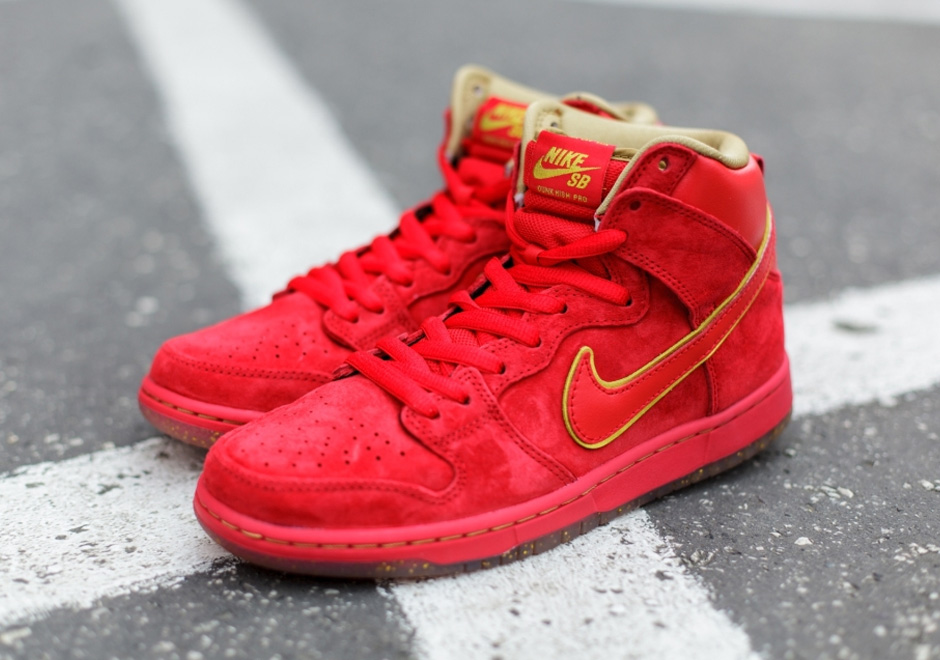 Nike SB jumped in on the Chinese New Year celebration with a killer tonal red suede edition of the Dunk High. Also featuring some gold trim and a gold speckled ice outsole, the simply executed design has established itself as one of the sleeper Dunk drops of 2014. 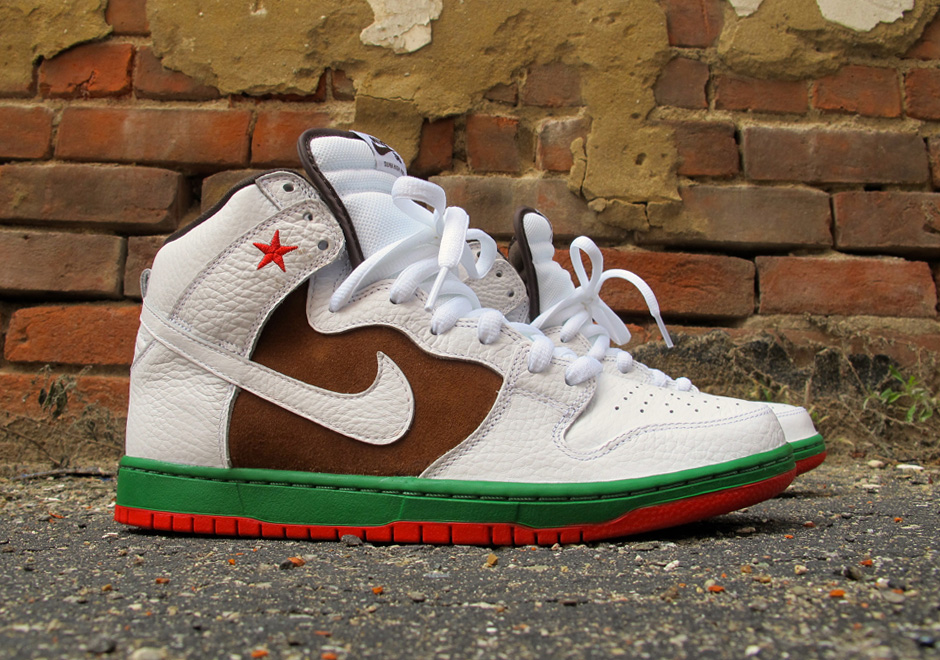 Everyone knew it was only a matter of time before the high-to-low/low-to-high SB Dunk revamps emerged, and while the “Cali” edition was definitely not one of the first candidates that came to mind, the High edition that hit in 2014 certainly nailed the formula quite successfully. 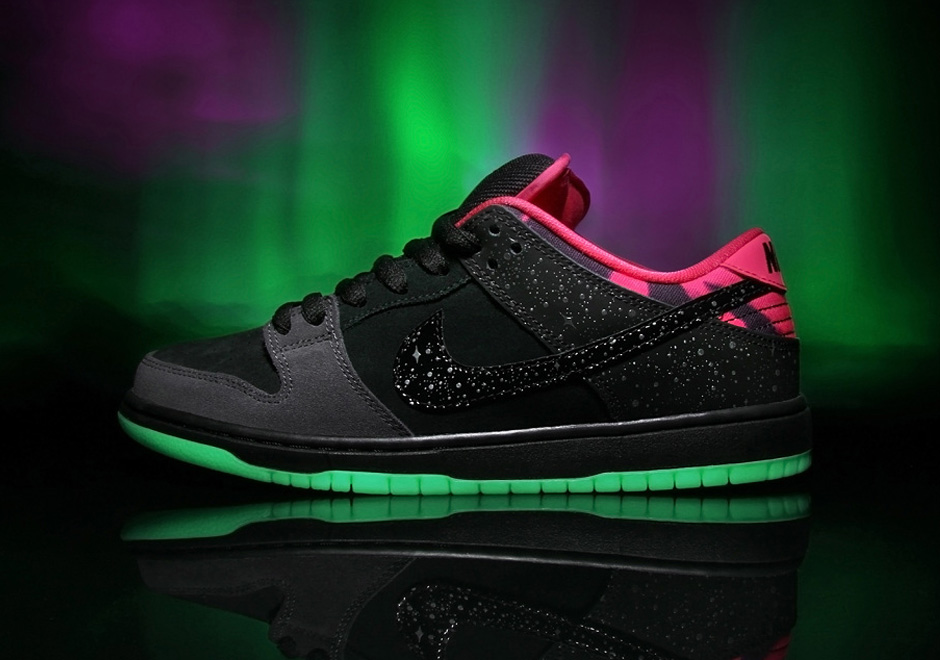 Although the Yeezy 2 color comparison was hard to ignore, Premier’s “Northern Lights”-inspired version of the Dunk Low had plenty personality of its own thanks to the creative application of materials and the wild pink pattern on the heels. 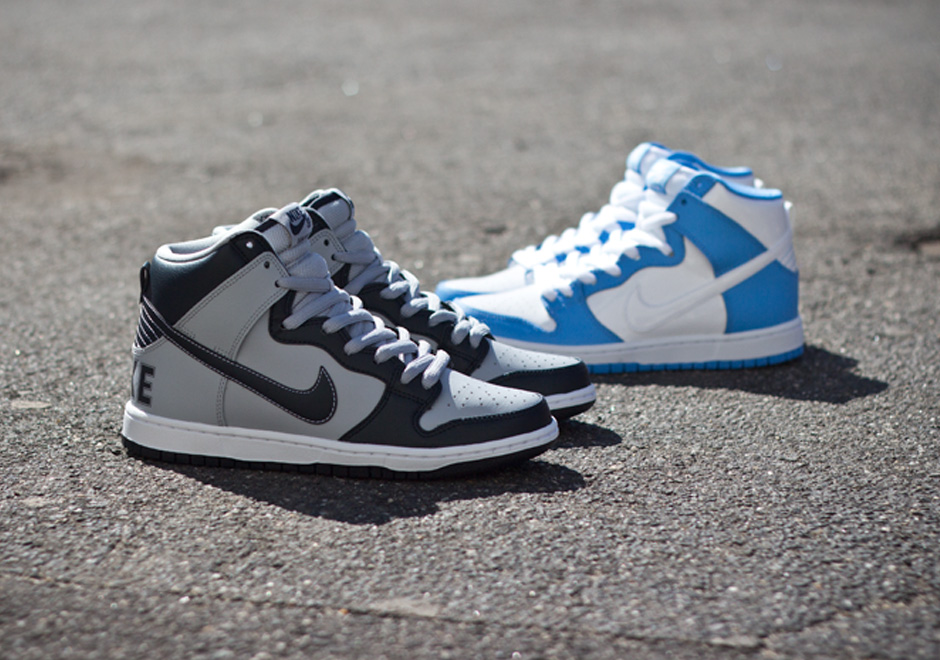 Nike SB harkened back to the Dunk’s original days as a basketball shoe with the well-received “Rival Pack”, featuring some old school renditions of the shoe done up in classic Georgetown and North Carolina color schemes. 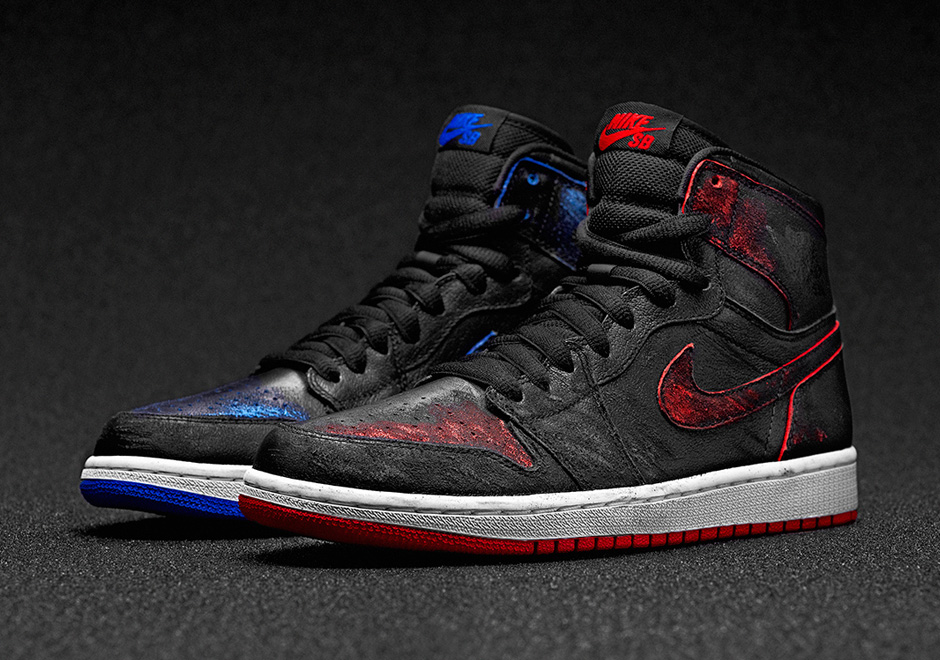 People have been skating in Air Jordan 1s ever since the shoe’s original introduction back in 1985, but it took almost 30 years for the connection to be officially co-signed by the Swoosh, as seen by this year’s collaborative releases of the AJ1 as a certified skateboarding shoe. 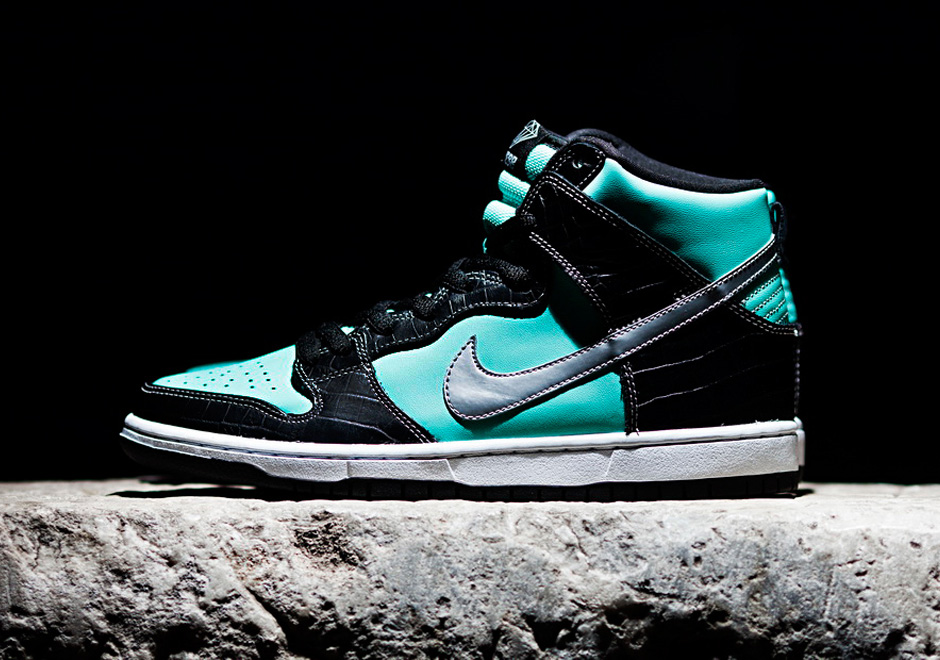 Of all the height-flip remakes that Nike SB could have brought us, the “Tiffany” edition was easily towards the very top of most Dunk fans’ wishlists. Diamond made dreams come true with the February release of their classic color scheme in high-top form. While widespread passion for Dunks has clearly simmered down a bit in recent years, the Diamond Dunk High was a loud and clear reminder that there are plenty of folks out there still hungry to keep the fever alive when the right elements come together on a shoe.