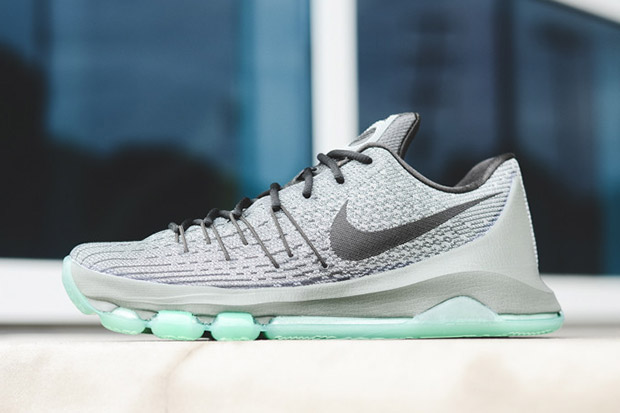 Kevin Durant‘s personal narrative has been rehashed by Nike plenty of times. The stories of his mother waking him up early in the morning to run up the nearby Hunt’s Hill have been as plentiful as the summer evenings spent KD doing the same. The Swoosh is returning to that personal Durant landmark for this Nike KD 8, slated to hit retailers tomorrow September 2nd for $180. The Night Silver and Deep Pewter Flyweave upper creates a muted tonal effect while Green Glow adds a hypnotizing translucence on the unique Zoom Air outsole. With Kevin back and as motivated as ever after a season that saw the former MVP only lace up for 27 games, the KD 8 could serve as one of Durant’s most memorable sneakers if he lives up to his own “I’m second best to no one” mantra. And while the NBA season is still far off in the distance, you can spend the few remaining days of summer hooping in KD’s most formidable release yet. Check for this pair on eBay too.