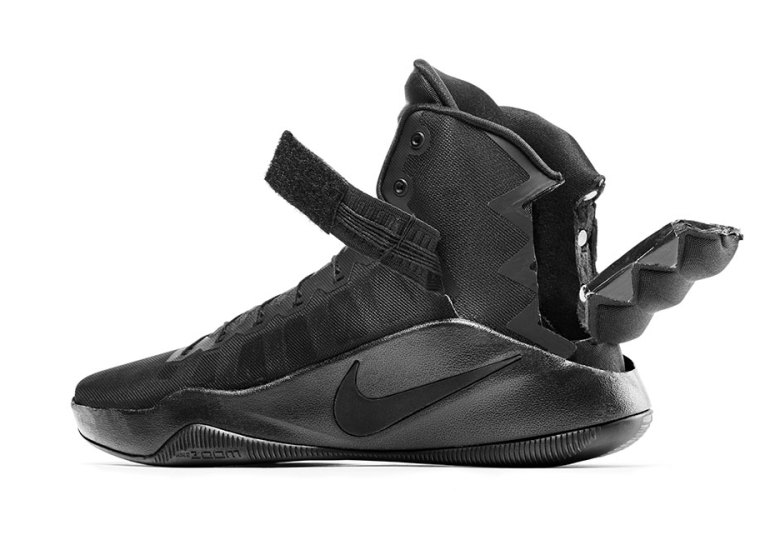 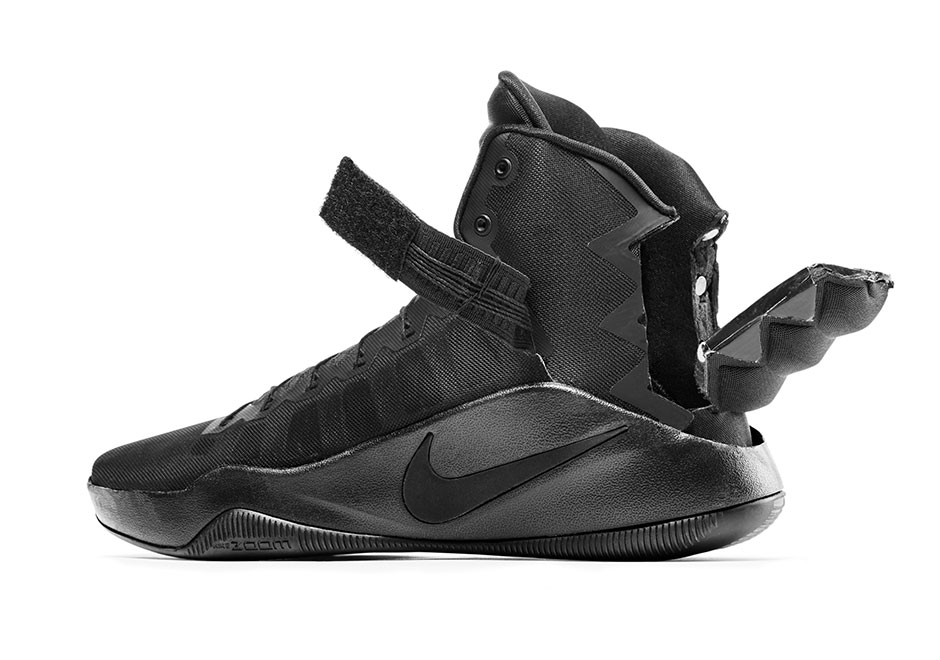 For decades, Nike has flexed its innovative muscles through performance footwear. Some view their shoes as wearable art, while others depend on their products solely for performance use. What every Nike product has in common is that they were created to serve a real purpose, and for decades the avant-garde thinkers in Beaverton have defied convention and produced some truly incredible footwear that not only raised the bar in design, but emphasized just how important a proper pair of sneakers were to the outcome of physical activity. Nike continues to remain obsessed with enhancing the athlete, and in 2015, a true pinnacle of design purpose was reached when Nike and Tobie Hatfield introduced Flyease, a wrap-around zipper solution that allowed athletes of specific needs to slide the foot in and out while providing ample lockdown without the use of shoelaces.

Tobie Hatfield, the Senior Director of Athlete Innovation at Nike, has been involved in several projects that addressed these insights throughout his nearly three-decade career at Nike. In 2012 he crossed paths with Matthew Walzer, a basketball fanatic and Nike loyalist who had encountered challenges with footwear due to his Cerebral Palsy. Walzer wrote a letter to Nike detailing the challenges that he had tying his shoes, and Tobie quickly reached out to Matthew to begin working on prototypes to address his needs. In 2015, the first-ever Flyease sneaker released to the masses and has seen additional iterations in the LeBron Soldier line while expanding into the running category with the Pegasus 33.

Late last year, Nike launched an open design competition called the Nike Ease Challenge. CEO Mark Parker invited designers from across the nation to create footwear that was easy to put on, remove, and lock down – similar to how Flyease made the LeBron basketball shoe easy to wear for Walzer and anyone else with comparable disabilities. Over 100 submissions were entered, and that number was whittled down to fifteen, three, and one after months of review and presentations. Today, Nike proudly announces the winner of the first-ever Nike Ease Challenge, but just before the big unveil, Sneaker News got a chance to speak with Tobie and Brett Drake to get their thoughts on the Ease Challenge, the future of sneaker innovation, and more. 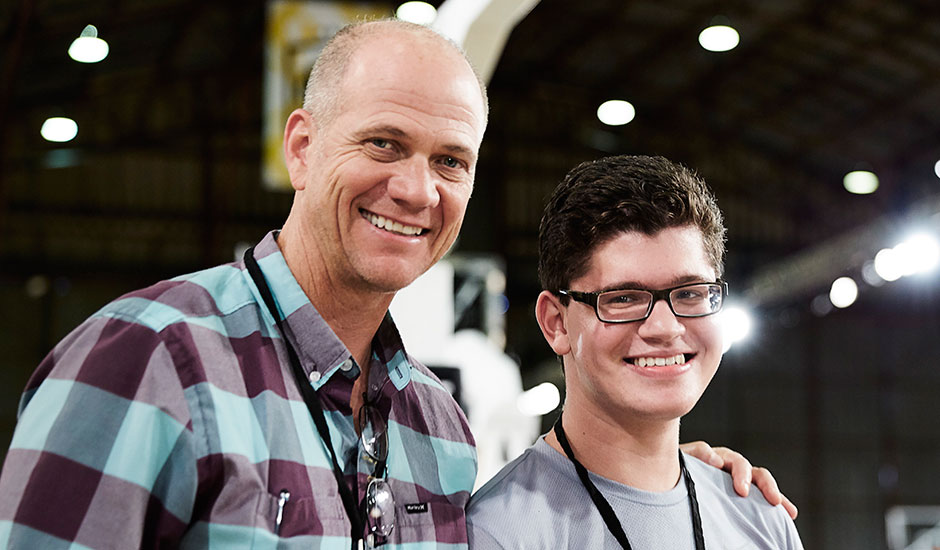 Above: Tobie Hatfield and Matthew Walzer after the LeBron Soldier 8 Flyease is revealed (Photo: Nike)

SN: With the debut of Flyease just under two years ago and the unveil of the self-lacing HyperAdapt, this type of ease-of-use innovation is having a bit of a “moment” at Nike. Is this the direction that Nike innovation is taking?

TH: I really see this as the way of the future, of how all people of all abilities put on adjust their shoes and take off their shoes. Who doesn’t want shoes that are easy to get out of? We all know that the mother of innovation is necessity; if you speak to someone like Matthew Walzer and see the needs that he has, we can all benefit from it.

Quite frankly, all of us to some extent, as we age, will become less able. It’s just a fact of life. I tell young designers that when we concept like this, you can kind of be selfish and design for yourself. It’s a great motivator and helps the focus.

But nonetheless, we need to listen to the Matthew Walzers of the world because those needs are right now. The HyperAdapt 1.0 and something like FlyEase and the concept that Brett has here are all under the umbrella of “Adaptive Fit”, and that’s definitely the future. 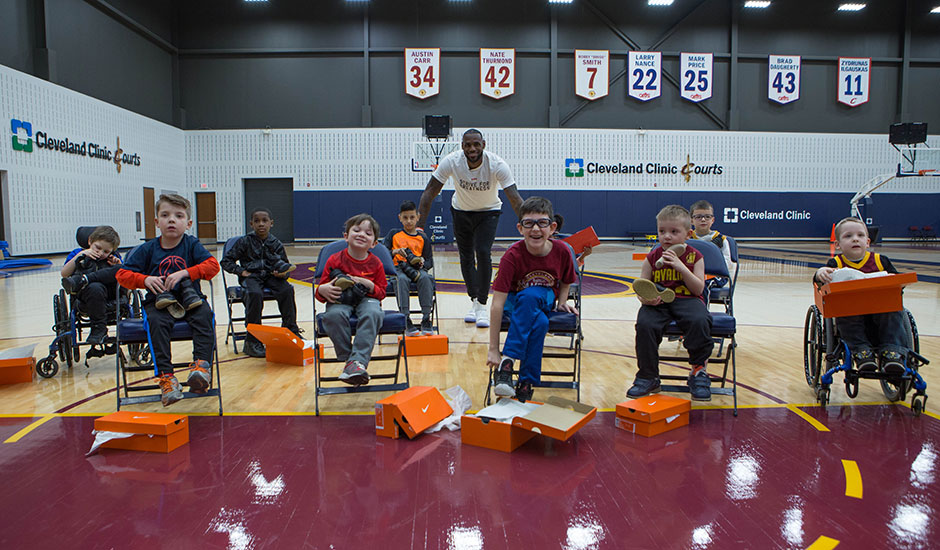 Above: LeBron James presents the Soldier 10 Flyease to youths from the Cleveland Clinic (Photo: Nike)

SN: When the Soldier 8 Flyease was first unveiled, LeBron appeared to have invested interest in the idea. What’s it like having an athlete of his stature and importance to back this up?

TH: We always wanted to put any technology into a shoe, we wanted it to stand and be very broad and go across all athletes and all abilities. LeBron is Matthew Walzer’s favorite athlete and he was like a “Superman” to him. So to have an athlete like him endorse this product was huge. Even recently when we unveiled the Soldier 10 Flyease, LeBron visited these small children and you have this giant of man gently opening the shoe and gently undid the shoe and gently putting it on the feet of these small little kids. Can you imagine? It means a ton. Every athlete we’ve had so far, whether it be Elena Delle Donne, Carl Lewis, all of these athletes that have been involved so far have gone on without hesitation and said “i’m in”.

We have people here at Nike where this Ease Challenge is not their primary job, and for them to put together this Ease Challenge that we’ve never been done before, they did it with a smile on their face and with joy because they knew they were rising to the occasion and helping someone in need and raising quality of life. 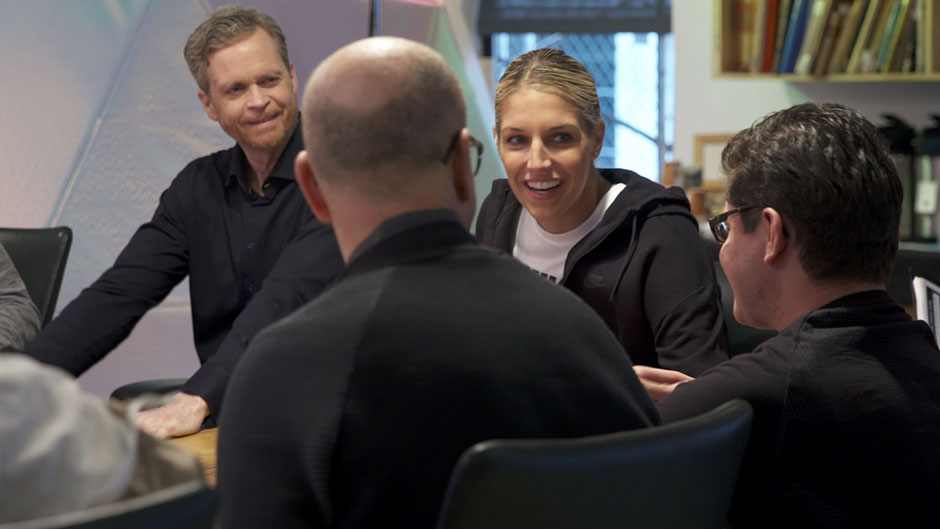 SN: Seeing that the Nike Ease Challenge had such a rich response from innovators, do you foresee Nike exploring more of these competitions?

TH: I think my official answer to that, is that it’s intriguing to us. The Ease Challenge was not easy to put together because it was our first open innovation event here at Nike, but we believe that it was really great to see all these competitors come in from all walks of life. I could potentially see us doing something like this in the future.

SN: What sort of advice would you give to aspiring designers today, knowing that so much has been done with shoes already?

TH: I would say first of all, follow your passion. I have a guy sitting next to me is a civil engineer and yet, when I talk to him, he had to forgo some of his work to pursue the Ease Challenge and be at a place around Nike. I think for designers in art school right now, eventually you should be following your passion. I came into design in a very odd way, to say the least. But if I had gone to design school, I feel like I would’ve ended up in the same place because you have to follow your passions and what’s inside of you, and it eventually came out for me and for design students.

I was asked by the Rhode Island School Of Design to speak to their students many years ago, and I asked them “why do you want me to speak to your students when I didn’t even go to design school myself?” and they said that’s exactly why – because I didn’t go to design school and could offer them outside tips. It’s really about where your passion lies and that’s where it has to fall into – what you really love to do.

I was an athlete, and a coach, but I was not a so-called “designer”. My passion though is still with athletes. You know our mission statement is “if you have a body, you are an athlete” and I think in large part is that I just wanted to help all people in general however I can. I’m not a doctor or a missionary – i’m not saving lives in that sense, but we can all contribute to well-being to every person as much as possible, and we can do that by following our passion and I would tell that to any aspiring designer as well. 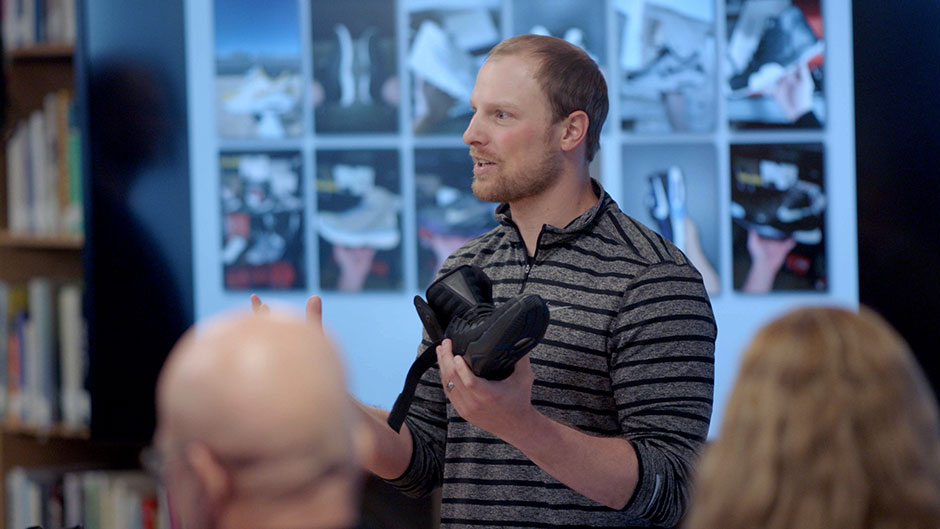 SN: How did you hear about the Ease Challenge and what attracted you to it?

BD: I’ve always been a fan of Nike and I follow Heidi (Burgett, Director of Communications) on Twitter, and read the story on Nike News. I got really inspired to join because I have a civil engineering background, but I always had a passion for footwear and I wanted to test myself to see if I had the ability to work in the industry. I looked at it as an opportunity to not only challenge myself with the design, but to prove to myself that footwear design wasn’t just a pipe dream. I wanted to prove that it was something that could happen and so far it’s working out.

SN: Since you won this challenge, do you plan on exploring footwear design as a career in the future? 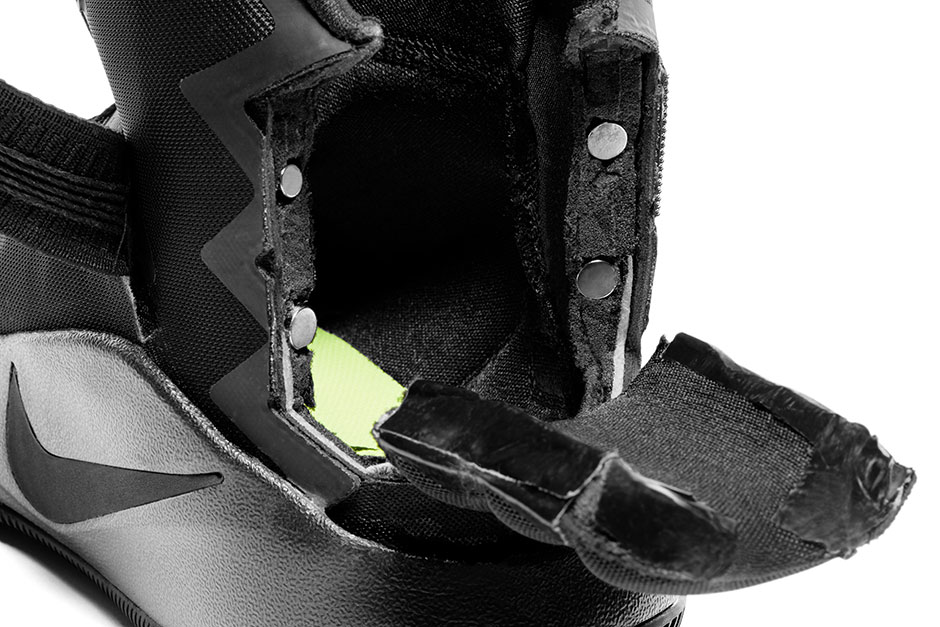 SN: What was the biggest obstacle in creating your design?

BD: The biggest thing for me was that it was something i’ve never done before. I don’t really look at myself as a designer, so the biggest thing was going through the process and testing the shoe and creating a prototype. I’ve never built a prototype. Actually diving into that process and learning as I go, because I didn’t have anyone to call up and ask for advice. I actually bought my own pair of shoes and just completely destroyed them to practice so I could make a more refined prototype for Nike.

SN: What’s it like winning an innovation-based competition from one of the most innovative companies in history?

BD: I hadn’t even thought of it like that in that sense, in that I won an innovation competition from an innovation company, so thank you for wording it like that! It’s really hard to comprehend for me…i’ve been such a huge fan of the brand and footwear in general, and I read Sneaker News and all the blogs, so I think it’s really that there’s going to be something written about me with my favorite company. Like any sneakerhead, I would have been happy just to come and visit Nike, let alone work with them on a shoe. I wish I can go through the names of people that I met, but it’s so overwhelming. It’s been two weeks since this process has been going on and it’s still hard for me to fully grasp it.

Brett will continue to work with Nike throughout the testing and prototype phase of his design. 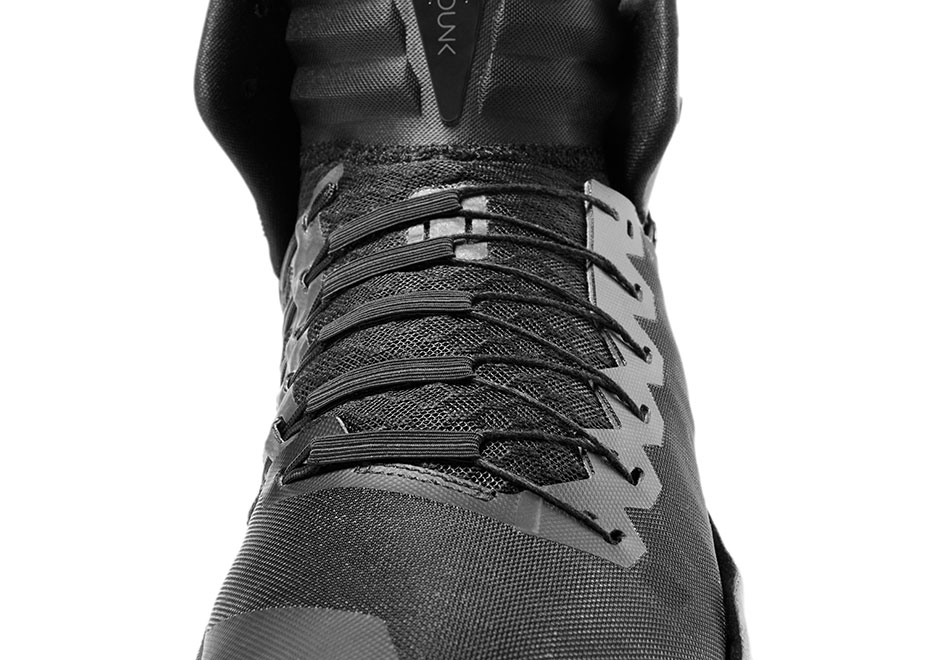 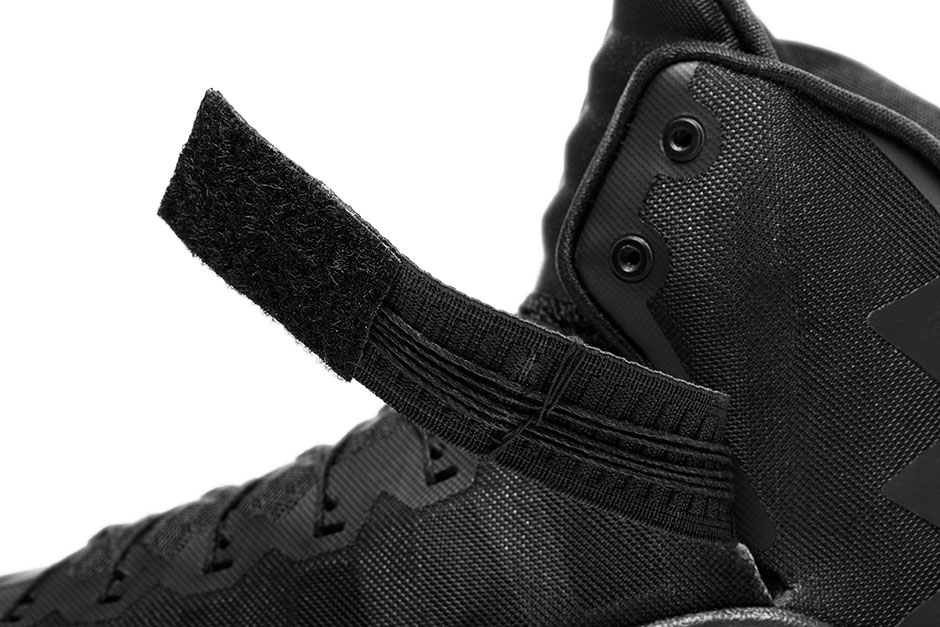 Above: Lockdown strap that wraps around the “drawbridge” heel (Photo: Nike)