The 10 Best Sneaker Collaborations Of 2017

While it’s true that there are too many collaborations going around in sneakers these days, the brands are making exceptional efforts in getting in touch with the right individuals and brands. For the purists, the traditional team-ups with shops will always be around, but 2017 went heavy with out-of-the-box thinkers and pop-culture phenomenons. We’re kicking off our year-end review by highlighting the ten best sneaker collaborations of 2017, focusing on shoe releases that went beyond the norms. Stay tuned for our selections for The 10 Best Nike, adidas, Jordan, and “Returns”, as well as a special list highlighting the most questionable drops of the year. 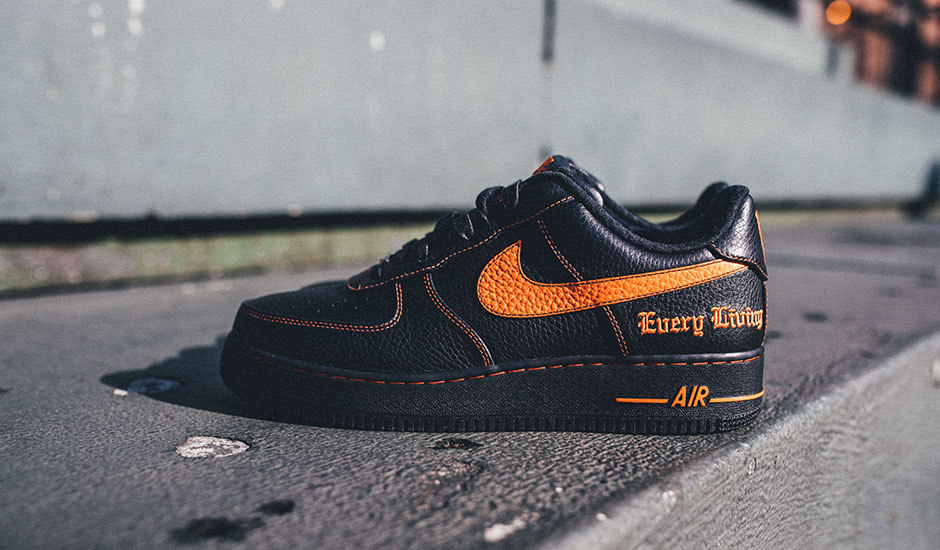 10. VLONE x Nike Air Force 1 Low
Of the many regional pockets that kept the Air Force 1 a cult hit, New York City’s uptown hood made it a staple of urban fashion. NikeLab’s collaboration with the Harlem-based apparel brand VLONE kept the juice flowing thanks to a Bespoke-quality construction that featured impeccable tumbled leather and orange detailing around the shoe. It’s creator, A$AP Bari, was credited from bring this design to life, bringing some much needed energy back to the uptown footwear scene. Unfortunately. it’ll be the last you’ll ever see as the brand has officially cut ties with the label. 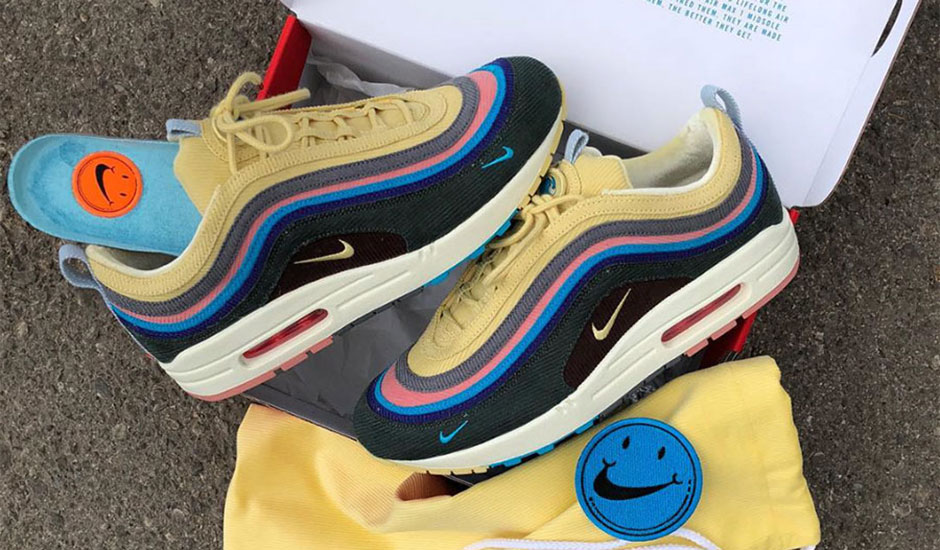 9. Sean Wotherspoon x Nike Air Max 97/1
Air Max Day’s RevolutionAir program went against the typical grain of the Swoosh. The brand is rather selective with who it partners with, so granting the voting public the power of executive order made this release that much more unique. Sean’s hybrid of the Air Max 97 and Air Max 1 won by a landslide, and despite the shoe dropping in only two stores in November, it sent formidable shockwaves worldwide. The upcoming wider release will be just as epic. 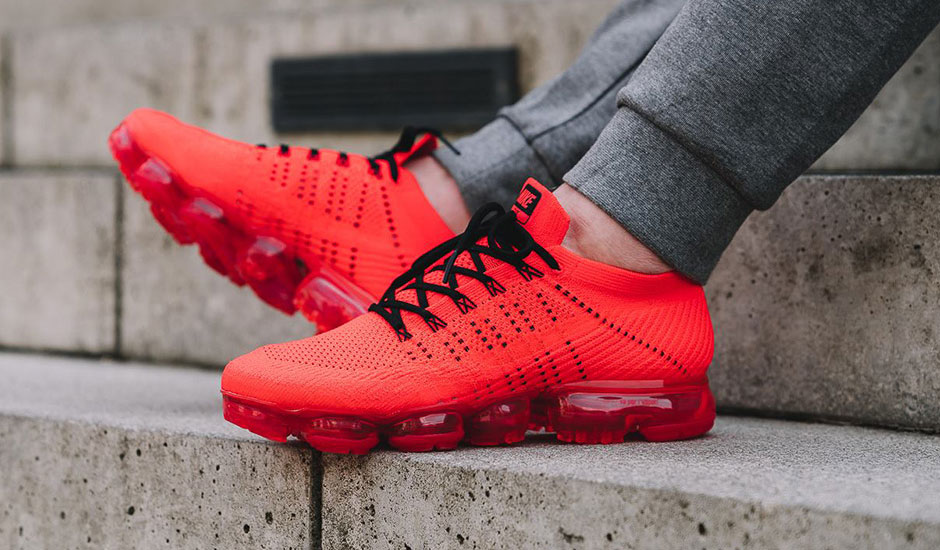 8. CLOT x Nike Vapormax
Back in the day, collaborations were just simple color transpositions with a minor details or logo added here or there. That just won’t cut it in today’s explorative world of footwear design, but some are just too good to overlook. CLOT’s fiery take on the innovative Vapormax shoe saw a full bright red upper with a matching Air, with subtle lettering on the unit itself. Despite it’s simplicity, it’s certainly the most recognizable Vapormax shoe to date. 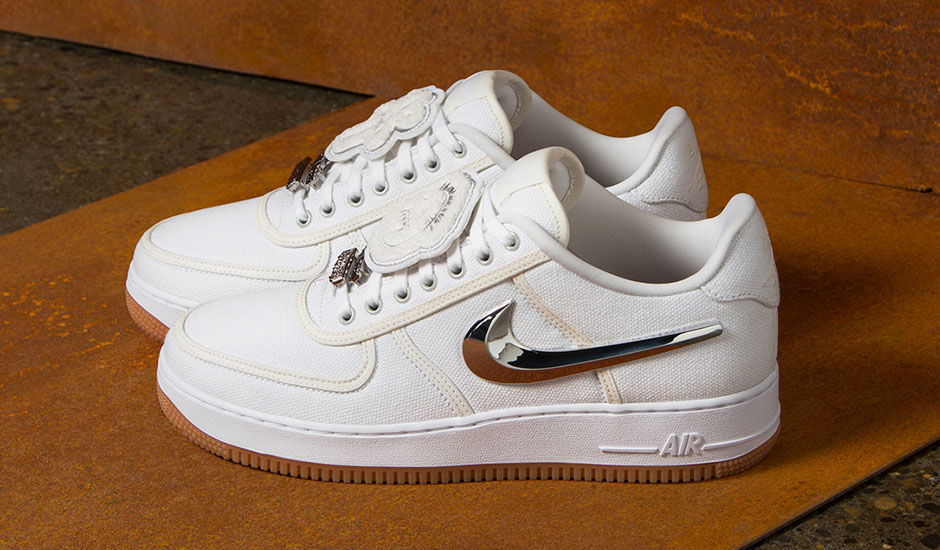 7. Travi$ Scott x Nike Air Force 1 Low
The Houston-based rapper’s first foray with Nike came in the form of an Air Force 1 Low as part of the brand’s AF100 campaign. Tasked with reinterpreting the classic white-on-white AF1, Scott went with an “inside out” canvas upper, gum soles, and the most ornate set of add-ons we’ve ever seen on a Nike shoe. Interchangeable Velcro Swoosh logos, large patches on the laces, and iced out grills as lace dubrae made these one of the best drops of the year. 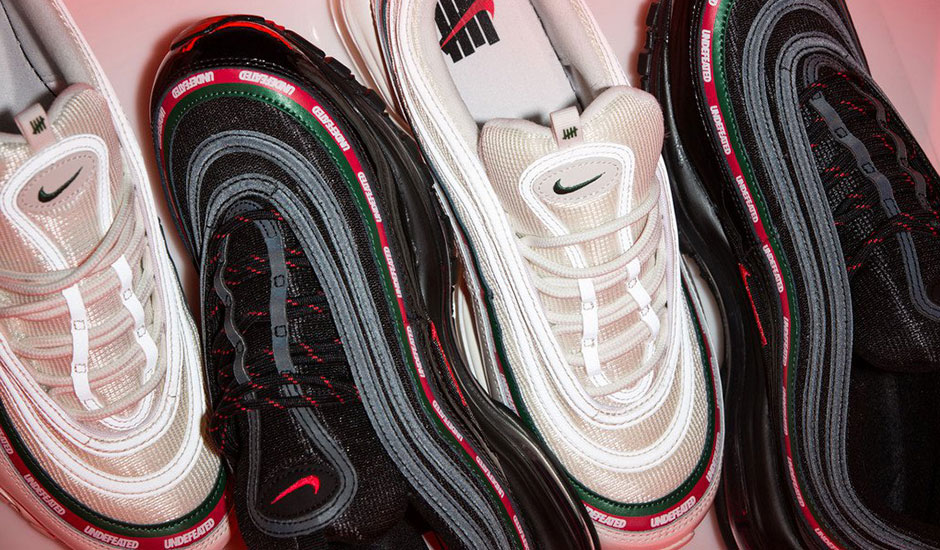 6. UNDFTD x Nike Air Max 97
The 20th Anniversary of the Air Max 97 model saw a front-to-back barrage of re-releases and new colorways, but the clear-cut cream of the cop with UNDEFEATED’s treatment of the classic. Inspired by the shoe’s cult status in Italy while infuxing some high-end notes, the Cali-based retailer added green and red tracks around the shoe with key branding elements that further distinguished the shoe. The Complex Con exclusive, which featured the famed flight jacket theme, sealed the win. 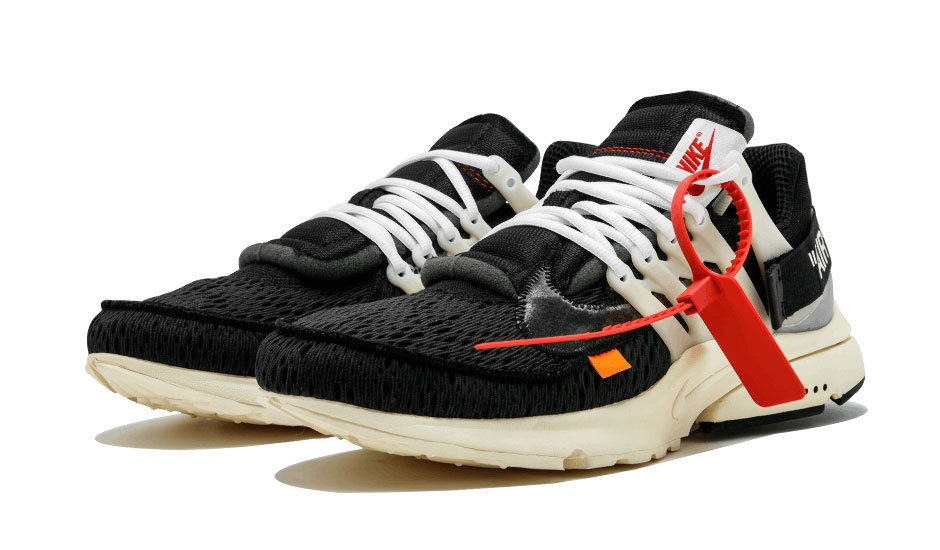 5. OFF_WHITE x Nike Air Presto
There were too many gems in “The Ten”, but the Air Presto by Virgil Abloh was the clear-cut runner up as the best in that set. The Chicago creative and founder of OFF WHITE toyed with the design heavily, adding an enlarged Swoosh logo as well as other quirky elements that added fashionable elements to a shoe that was once called a “t-shirt for your feet”. 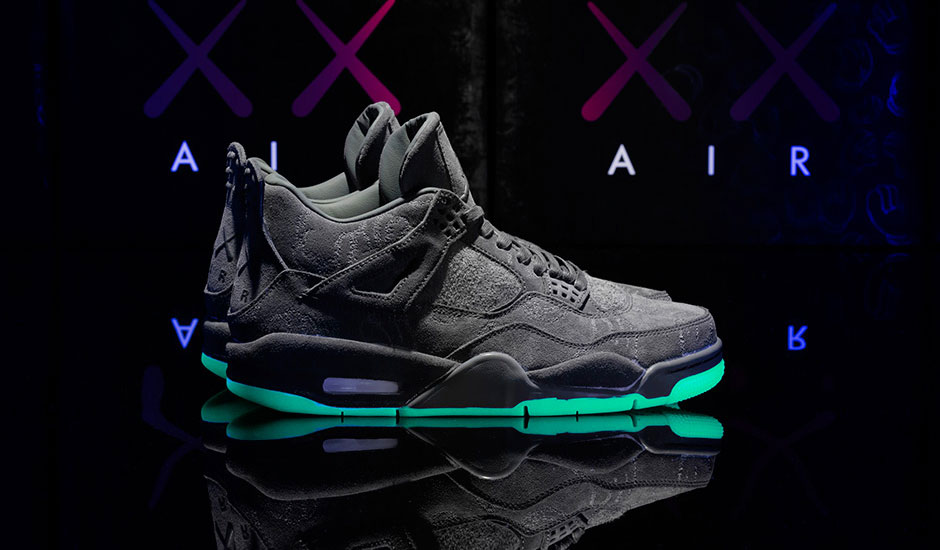 4. KAWS x Air Jordan 4
What else needs to be said about this collaboration between Jordan Brand and NYC-based KAWS? The full grey suede upper went beyond convention as it was draped over the “wings” as well as the midsole, while the artist’s signature hand illustration was etched around the body. The accompanying apparel was dope too, but the best part about this drop was the massive XX logo projected onto the walls of the Brooklyn Museum during the official unveil. 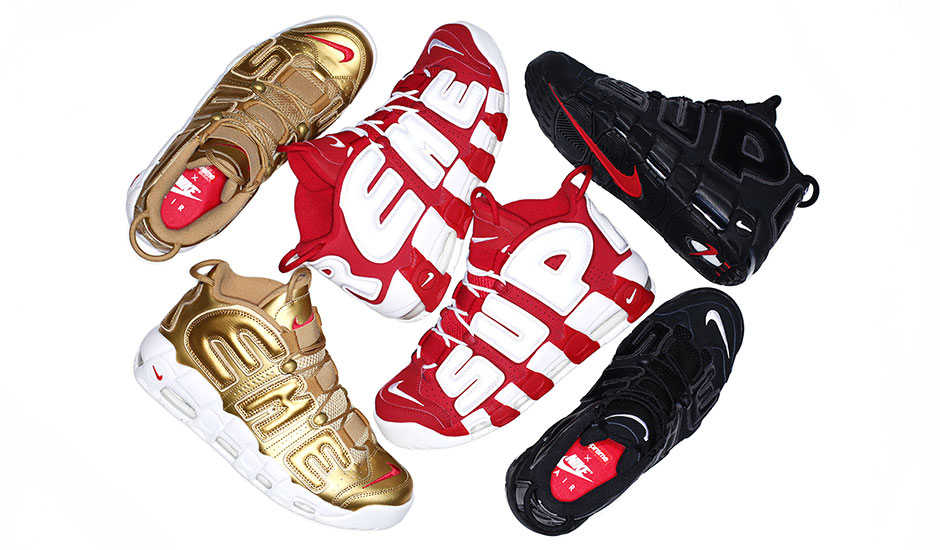 3. Supreme x Nike Air More Uptempo
Leave it to Supreme to transform one of the most obnoxious Nike shoes in history into something even more audacious. The Air More Uptempo’s recognizable AIR was transposed with the NYC-shop’s name in the same bold font, with three stupendous colorways making their way to store shelves. It’ll never be imitated. 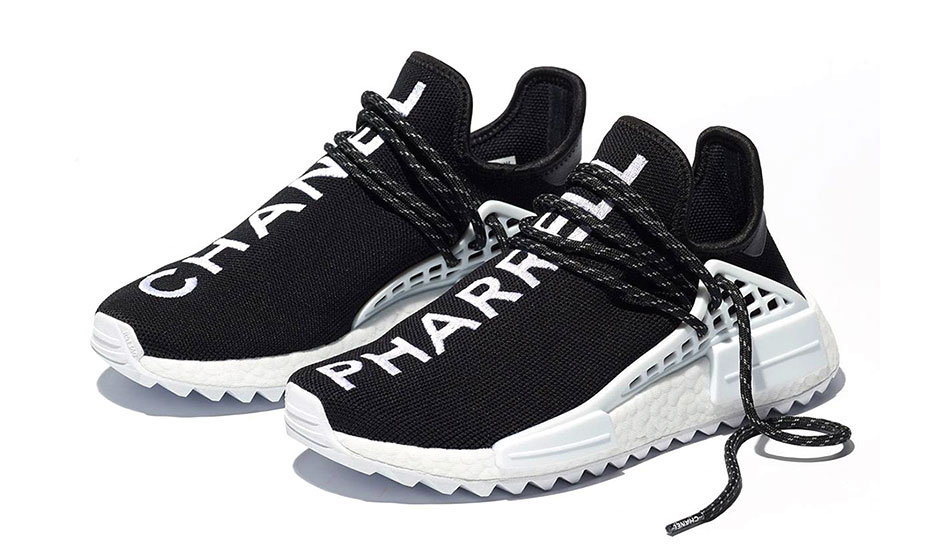 2. Chanel x Pharrell x adidas NMD Human Race TR
To celebrate Chanel’s residency in colette throughout the month of November, adidas called on the cultural elite known as Pharrell to create a special edition colorway of the NMD Human Race TR. The design was rather simple as a the shoes featured nothing beyond black and white, while the only exterior branding of the luxury brand was spotted on the embroidered of the upper. These were released only through an online raffle in which an actual court bailiff was responsible for picking the winners. 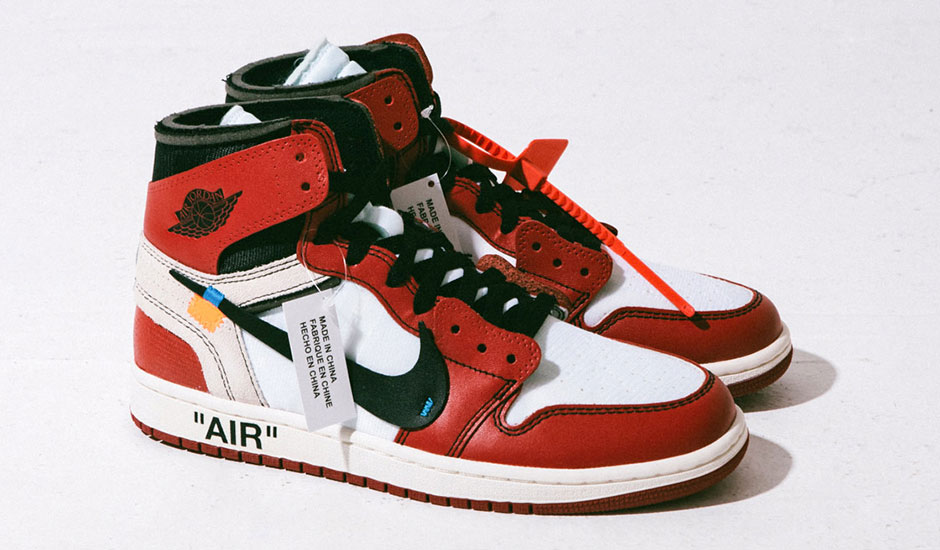 1. OFF WHITE x Air Jordan 1
The crown jewel of collaborations in 2017 was Virgil Abloh’s reinterpretation of the Air Jordan 1 for “The Ten” collection with Nike. Completely deconstructed and its innards exposed, this somewhat freakish design of the 1985 original was the single most sought-after sneaker of the year, causing Nike to reschedule its release in November due to the high demand.