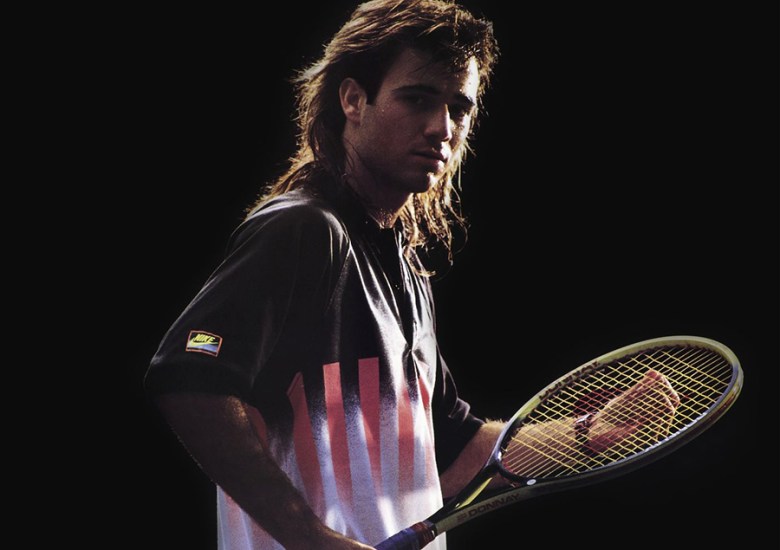 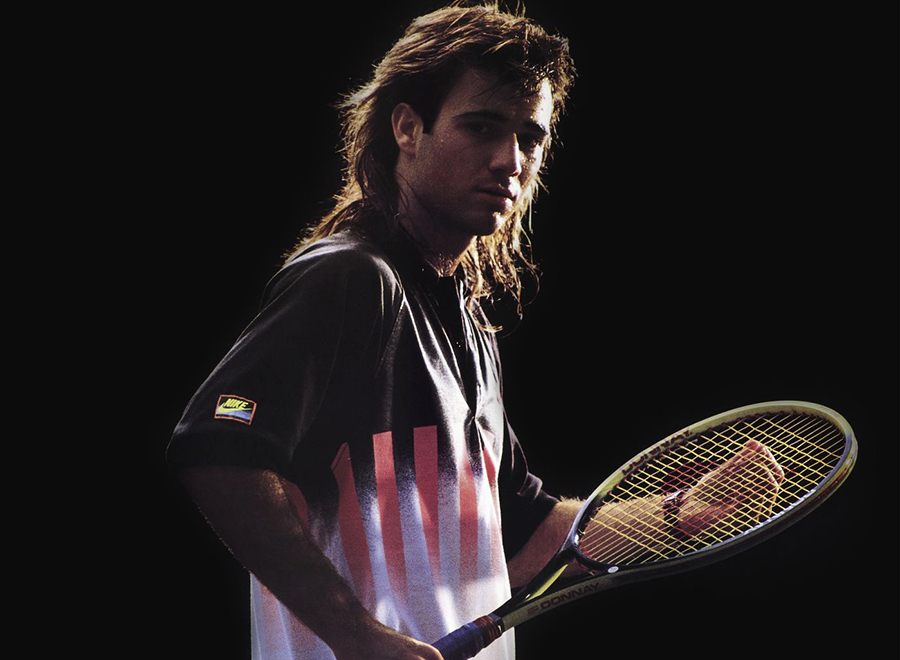 The BBC described Andre Agassi as “perhaps the biggest worldwide star in [tennis] history,” upon his retirement in 2006. That trusted British media outlet could have removed the ‘perhaps’ and it would have ruffled fewer feathers than Agassi’s rebellious image did, flying in the face of tennis traditions. Andre’s impact extends beyond the game whose once rigid dress code he all but destroyed, into one of the defining looks of that golden age of the late ’80s/early ’90s.

Agassi’s 1989 Nike Air Tech Challenge II is the quintessential tennis shoe from this period. It refined a technical approach introduced on the Air Trainer 1 he’d worn in ’87 and introduced the first in a series of memorable prints and colors with the ‘Hot Lava’ colorway that is about to retro for just the second time this weekend. Let’s travel back now to where it all started, so we understand the full context that makes this man and this particular one of his signature shoes so important.

AGASSI and McENROE
Andre Agassi’s rebellious approach to tennis was unique but not unprecedented. The sport already had its ‘bad boy’ in the foul-mouthed seven-time Grand Slam champ John McEnroe. Johnny Mac was tennis’ representative on the do-it-all Air Trainer 1 and his alignment alongside Agassi for the ATC 2 can be seen as a passing of the torch. Interestingly, McEnroe played quite well in 1989, including a win at the last ever WCT Finals. 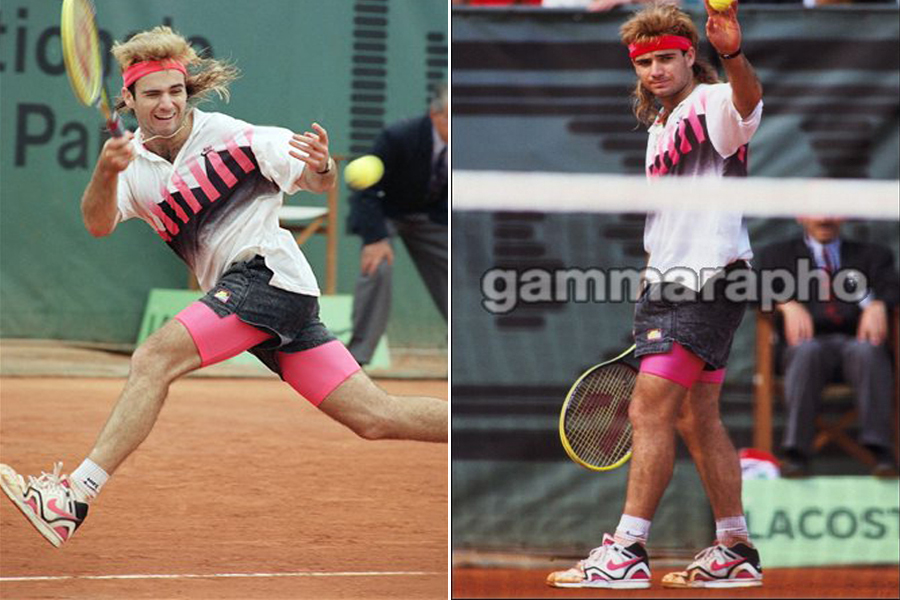 ON COURT
The Air Tech Challenge II had serious on-court performance to go along with its good looks. Along with McEnroe’s resurgence, the ATC2 was on Agassi’s feet when he made the 1990 French Open final. Andre was the victim of Andres Gomez’ lone Grand Slam singles victory, but he would eventually capture that elusive Roland Garros crown in ’99. 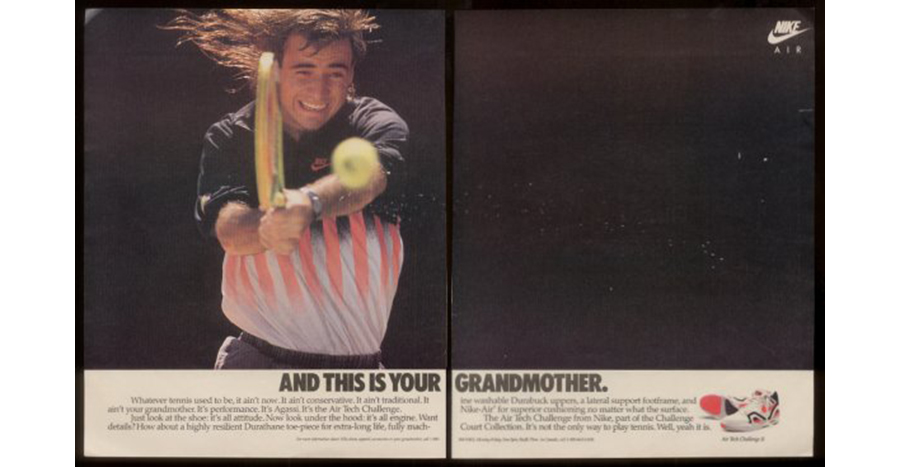 PRINT AD
Off the court, Nike dialed up the marketing attention given to the Tech Challenge line in concert with Agassi’s rise up the world rankings. Magazine advertisements played up the fact that tennis had never seen such willful disregard for its longstanding traditions. Maybe they forgot that the ball itself is neon yellow. 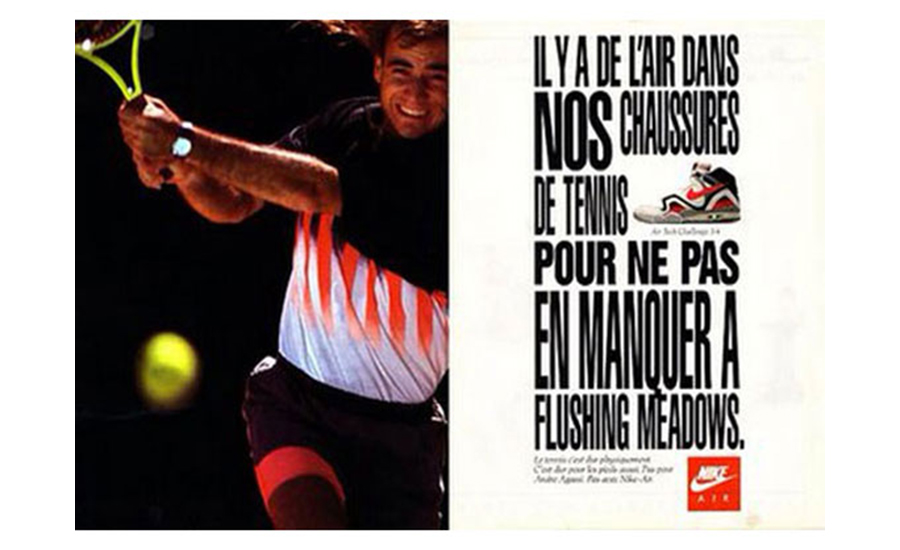 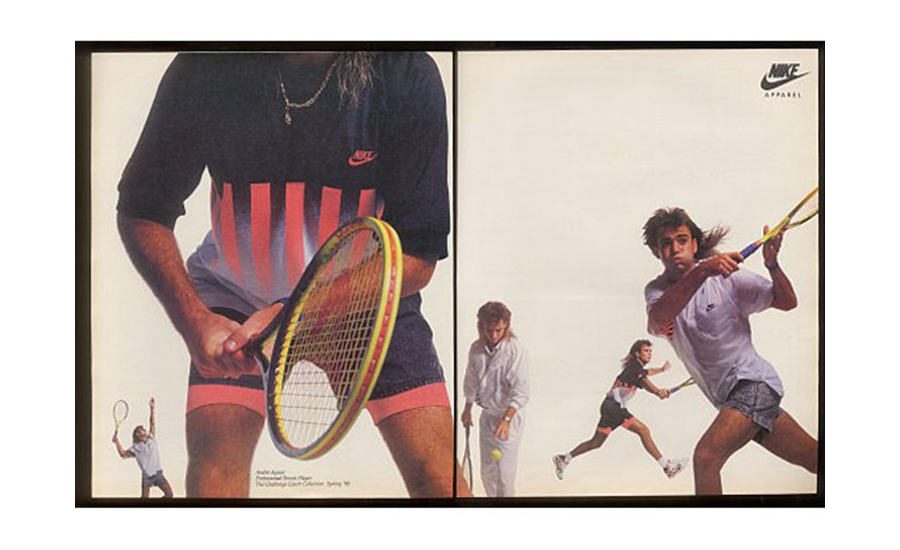 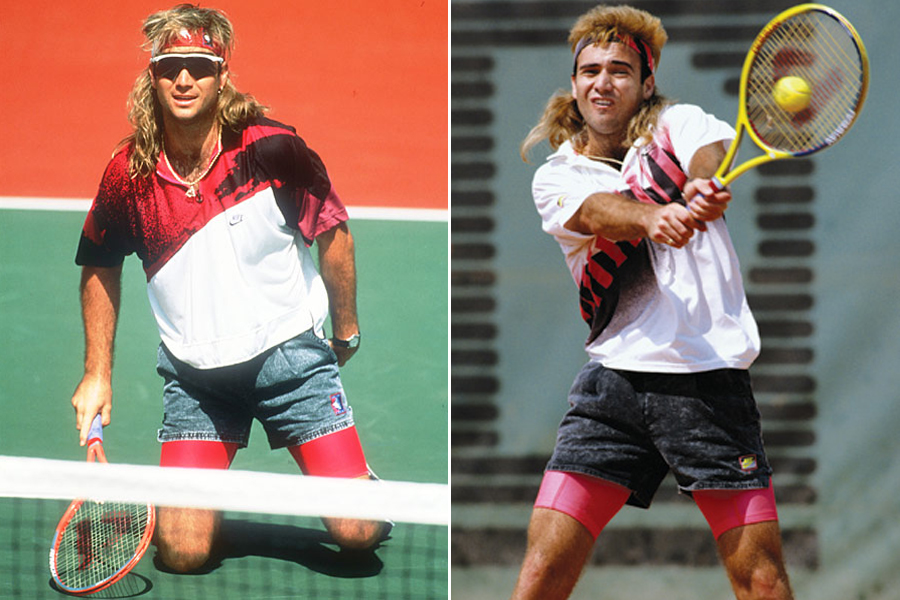 APPAREL
Agassi’s ATC line was complete with a bold new apparel line. Items like electrified polo shirts and denim shorts with or without compression linings further signaled that rock and roll tennis was the wave of the future. 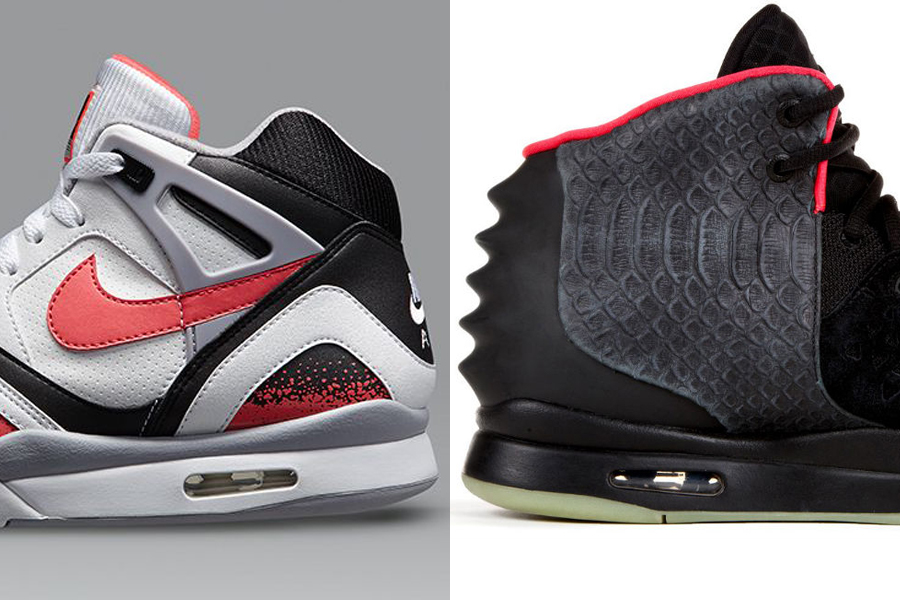 SOLES
Andre Agassi revolutionized tennis aesthetics. He also perfectly reflected the era of his emergence, and the ‘Hot Lava’ Air Tech Challenge II in particular is a keystone release. The next time you hear someone erroneously mention how this shoe has the Nike Air Yeezy 2 sole, remind them that both the tooling and black/pink colorways were Andre’s twenty years before Kanye’s. 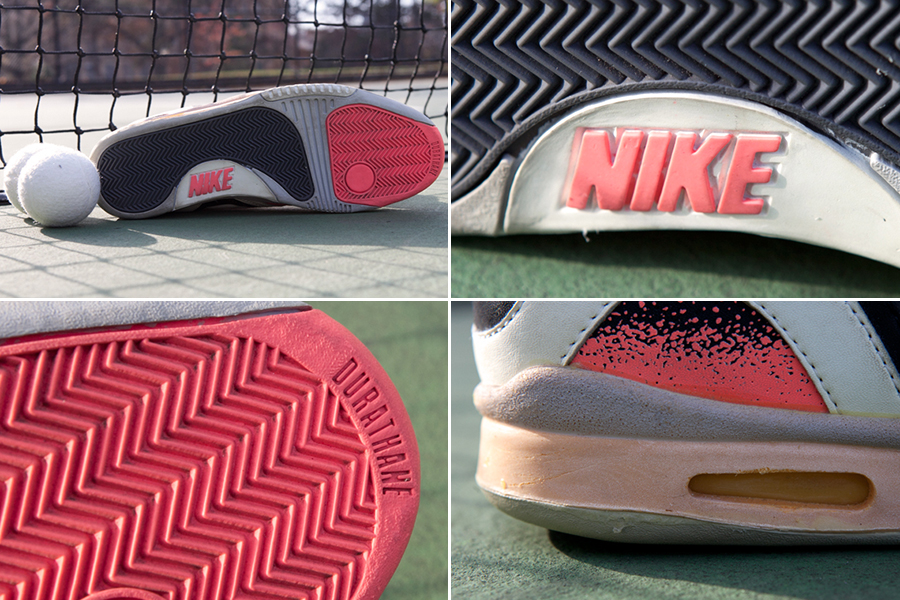 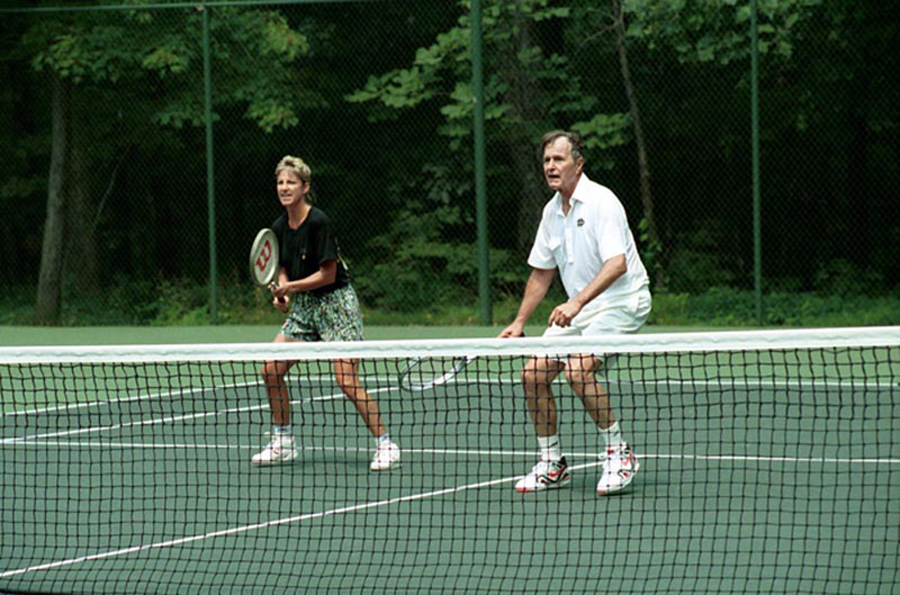 MAINSTREAM IMPACT
There are several celebrities who were spotted in OG Air Tech Challenge IIs. Chief among them was the then Commander in Chief, 41st US President George HW Bush, seen here in a little doubles action. 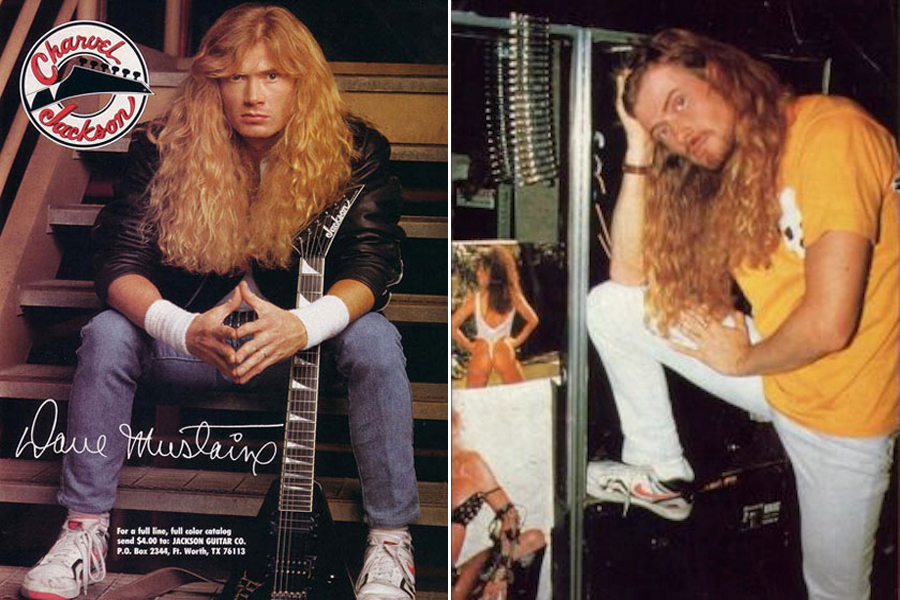 CELEBRITY CO-SIGN
Kanye West wasn’t the first to use that famed ATC2 tooling, nor was he the first musical genius who found Agassi’s OGs irresistable. Megadeth metal god Dave Mustaine shredded in the ‘Hot Lavas’ among other golden era heat he was known to wear. 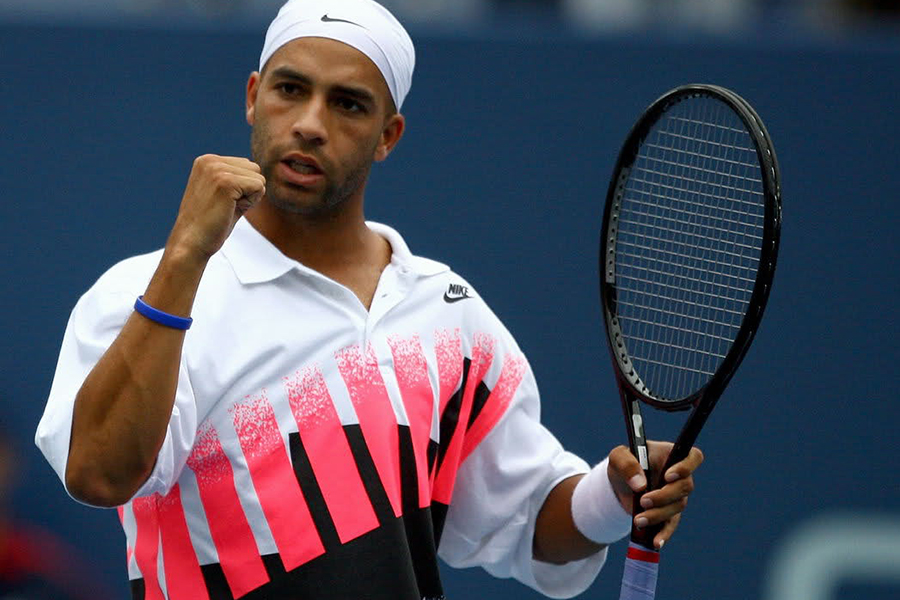 CULTURAL ICON
When Nike Sportswear began Tech Challenge retros in the mid 2000s, Andre Agassi had moved over to adidas. His connection with Nike and his products proved much stronger than this new partnership, simply because Agassi represents how we remember tennis looked for an extended period. James Blake honored the man who beat him at the same tournament one year earlier when he wore a ‘Hot Lava’-striped polo at the 2006 US Open. DJ Bob Sinclar busted out an Agassi costume at a 2010 French Open exhibition twenty years after the ‘Hot Lavas’ made their first appearance on the clay. 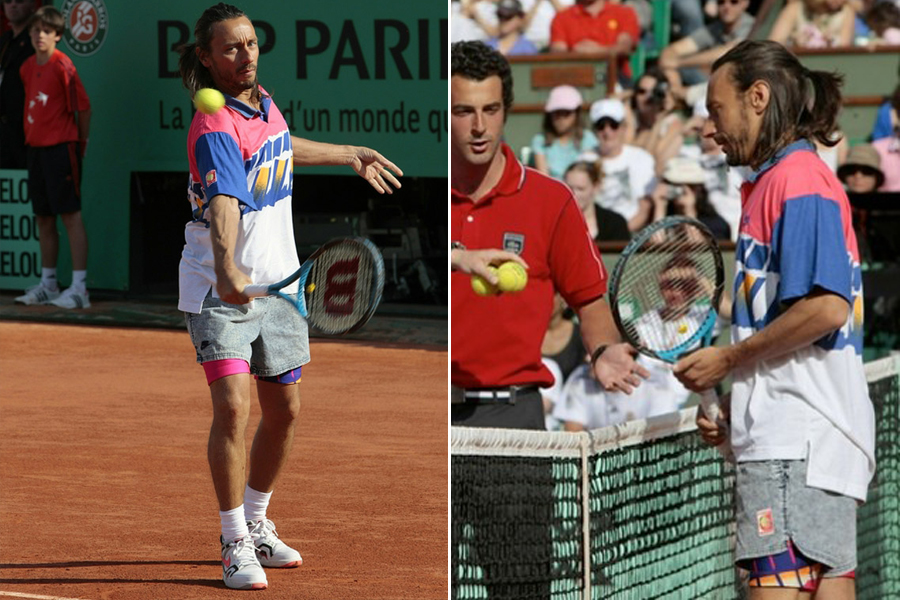 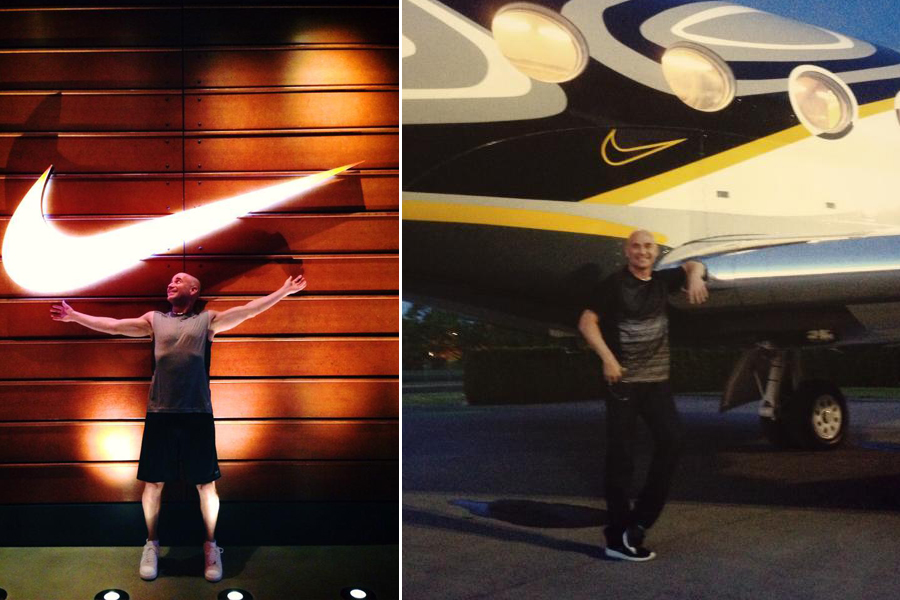 AGASSI RETURNS TO NIKE
Sinclair’s appearance made apparent what we’d all been thinking anyway: Andre belongs with Nike and we need more retros! Agassi rejoined the Swoosh last May after a productive in-person meeting with Nike CEO Phil Knight. His return opened the door to a bunch of retros and already this spring we’ve welcomed the return of the Air Tech Challenge Huarache, have the ‘Hot Lava’ ATC2 dropping this week and a handful of Tech Challenge-inspired Nike Sportswear releases with more to come. 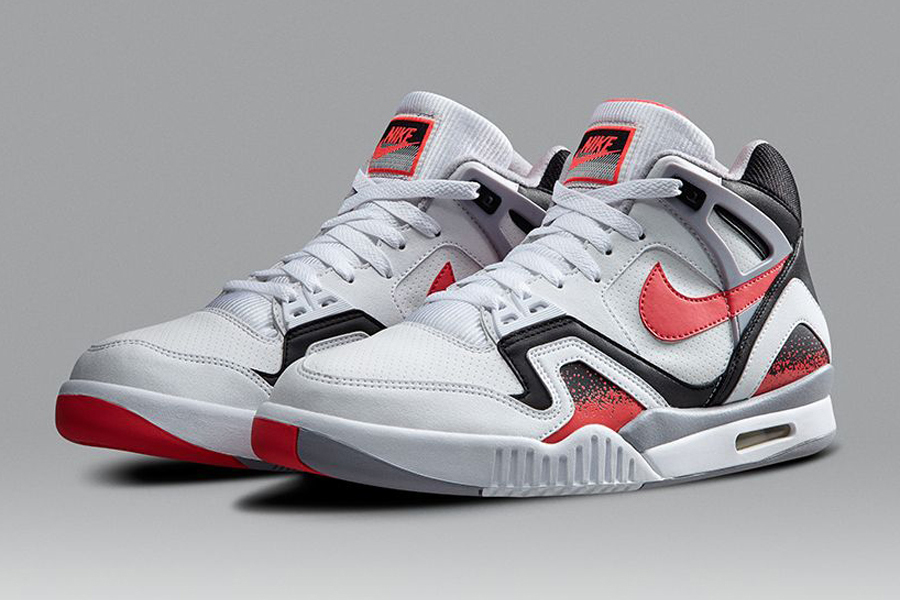