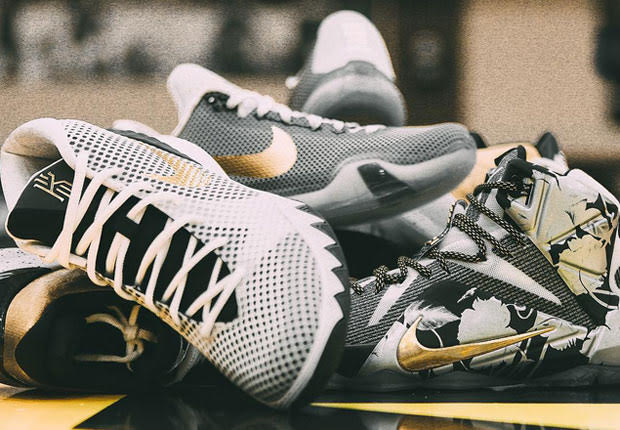 Nike Continues To Create PEs For the Peach Jam Finals

Nike Basketball is currently in the throws of touring some of the finest high school hoopers around the country for a number of camps and workouts. The ongoing Nike EYBL Peach Jam tournament recently wrapped up and the players were treated to a number of player exclusives. The Kyrie 1 returned featuring an enticing metallic gold Swoosh and tongue decal while a contrasting white and black held down most of the upper. The LeBron 12 returned with a floral pattern on the posite overlay while the megafuse upper’s white and black allowed for the dash of metallic gold to stand on its own too. Also included was a Kobe 10 in a similar shade. There’s no word yet on whether we’ll be lucky enough to get a chance at grabbing any of these pairs later this summer, but stay tuned for more updates right here on SneakerNews.