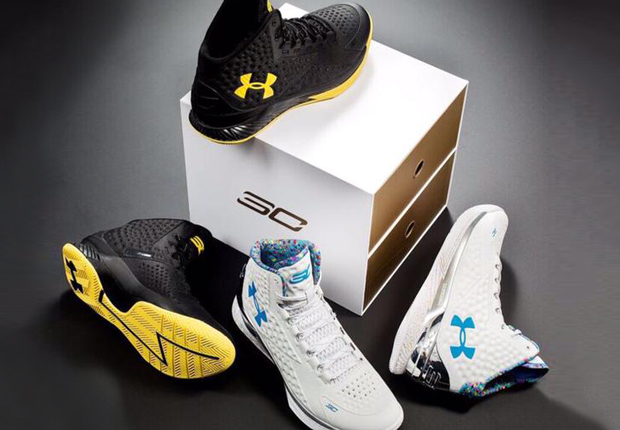 First Look At The UA Curry One Championship Pack

The Warriors have been taking hits left and right from opposing Western Conference foes (namely the Los Angeles Clippers) but it all points to people hating when you’re on top. The same could be said for Steph Curry and Under Armour, each who had a crazy successful year in 2014-2015 thanks to the introduction of the Under Armour Curry One. Now UA will celebrate all of Steph’s success with the upcoming Championship Pack on 10/20. The two-pair collective features celebratory NBA Finals boxing with a clean white and gold box set in honor of the Larry O’Brien trophy while two of Curry’s most head-turning PEs are included. A Batman like black and yellow is utilized, one that Steph wore throughout last season’s Finals appearance. His UA Curry One “Birthday” PE is also included with a white upper, chrome heel construction, and confetti-printed lining. Check out what promises to be one of the last UA Curry One release after the break and get ready to pick up your pair from select retailers on October 20th.

Under Armour Curry One “Championship Pack”

The @underarmour Curry One Championship Pack drops 10/20 online and in select stores! pic.twitter.com/IlYUzt6Rfw