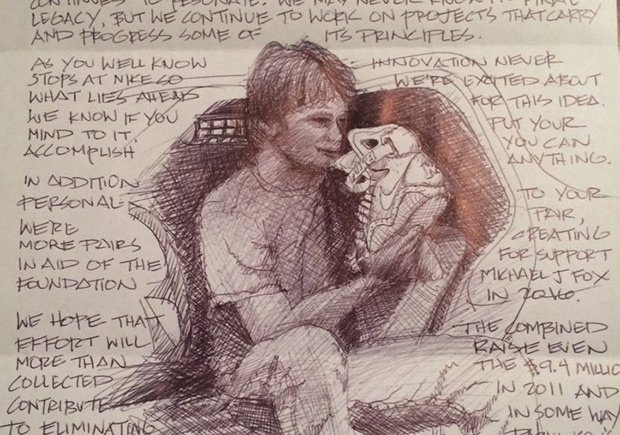 Incase you didn’t know, today is Back II The Future Day. As sneakerheads across the world wait for Nike to unveil the power-lacing Nike Air Mag retro that the Swoosh has hinted at dating all the way back to 2011, the creator of the once fictitious model featuring the once fictitious technology, Tinker Hatfield sent a letter to Michael J. Fox in honor of the day. The letter confirms that the Nike Mag will be releasing to benefit the Michael J. Fox Foundation, and since Fox played Marty McFly and was the first to wear the model, he will also be the first person to get his hands on the official retro. Tinker goes on to say the following: In addition to your personal pair, we’re creating more pairs for support in aid of the Michael J. Fox Foundation in 2016. Whether that means that proceeds will start pouring in come next year or the actual Mag will be available for purchase is still up in the air, but stay tuned for an official unveiling later today. In addition Fox will be the primary guest on Jimmy Kimmel Live, with strong indication that the shoes will be on center stage much like it was on the Letterman stage in 2011. Read the full letter below.

Almost thirty years ago we embarked on a journey to create a glimpse into “the future”. Although the project started as science fiction, we’re now proud to turn that fiction into fact. As the first, most celebrated wearer of the Nike Air Mag, we wanted you to be the first to receive a living pair. I meant ‘Nike Mag’ (I must have air on the brain!) What is so special about the Nike Air Mag is its impact continues to resonate. We may never know its final legacy, but we continue to work on projects that carry and progress some of its principles. As you well know innovation never stops at Nike so we’re excited about what lies ahead for this idea. We know if you put your mind to it, you can accomplish anything. In addition to your personal pair, we’re creating more pairs for support in aid of the Michael J. Fox Foundation in 2016. We hope that the combined effort will raise even more than the $9.4 million collected in 2011 and contribute in some way to eliminating Parkinson’s Disease in our lifetime!

The letter I received from Tinker today. Thanks @Nike pic.twitter.com/UIolXrkUVC