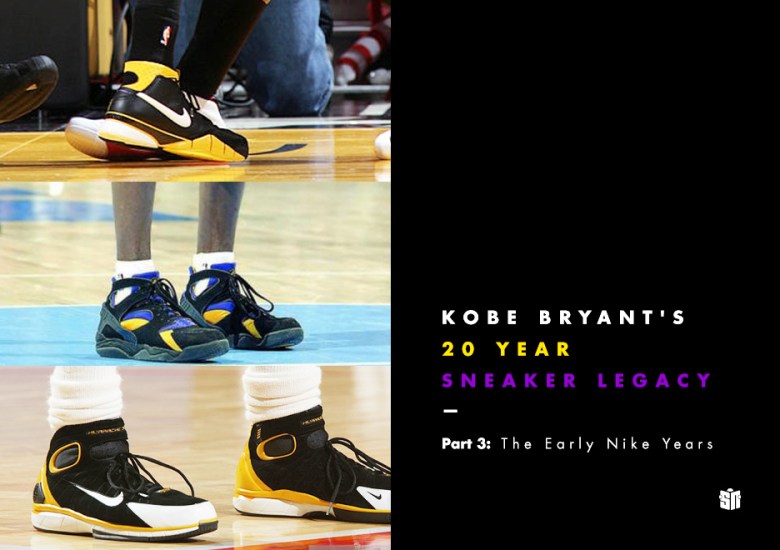 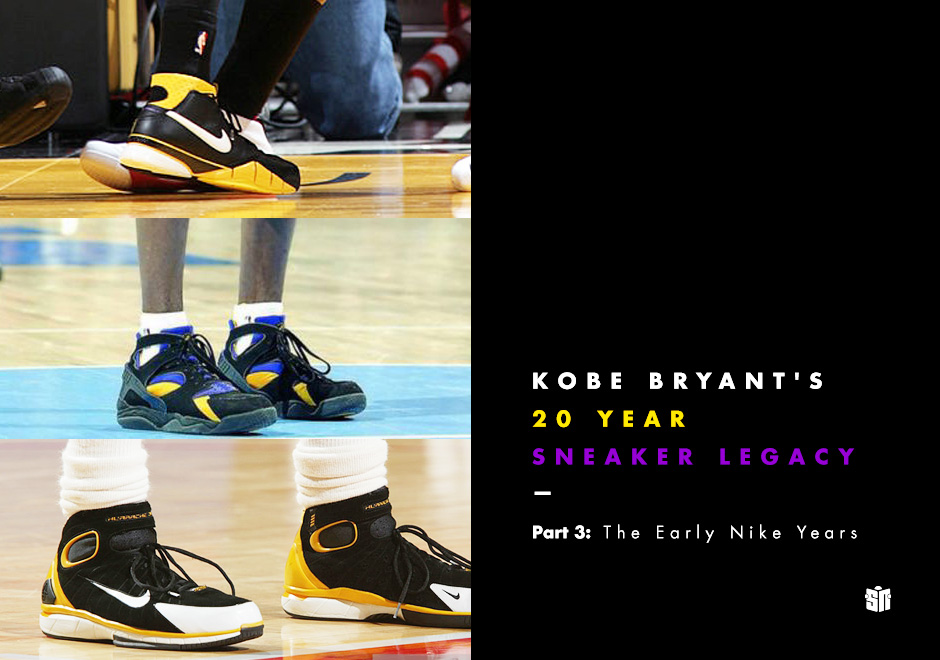 Where we last left off in the story of Kobe Bryant’s 20 Year Sneaker Legacy, the Black Mamba had just completed his year of legendary sneaker free agency, signing a deal with Nike during the summer of 2003. Thirteen years later, we all know how important this deal was, as the partnership between Kobe and designer Eric Avar would change the way most basketball sneakers are designed and constructed today. The most revolutionary model to date in the Nike Kobe line would obviously be the Zoom Kobe IV, which re-introduced the low-top as a formidable option on the basketball court. But before we get to the low-tops, let’s take a look at the first chapter of Kobe’s tenure with Nike.

Much like his sneaker free agency, Kobe’s early Nike days were filled with PE colorways of some already existing Nike models. It wouldn’t be until his third season with Nike that his first signature sneaker was released, the Nike Zoom Kobe I. In this look back at Kobe Bryant’s monumental sneaker career, we’ll recap the early Nike years and pre-low-top era, documenting every model he wore in the first five seasons of one of the most crucial partnerships in sneaker history.

Kobe began his Nike career by throwing it back with PE colorways of the Air Flight Huarache, which he wore in home (white) and away (black) colorways for most games early in the 2003-04 season. 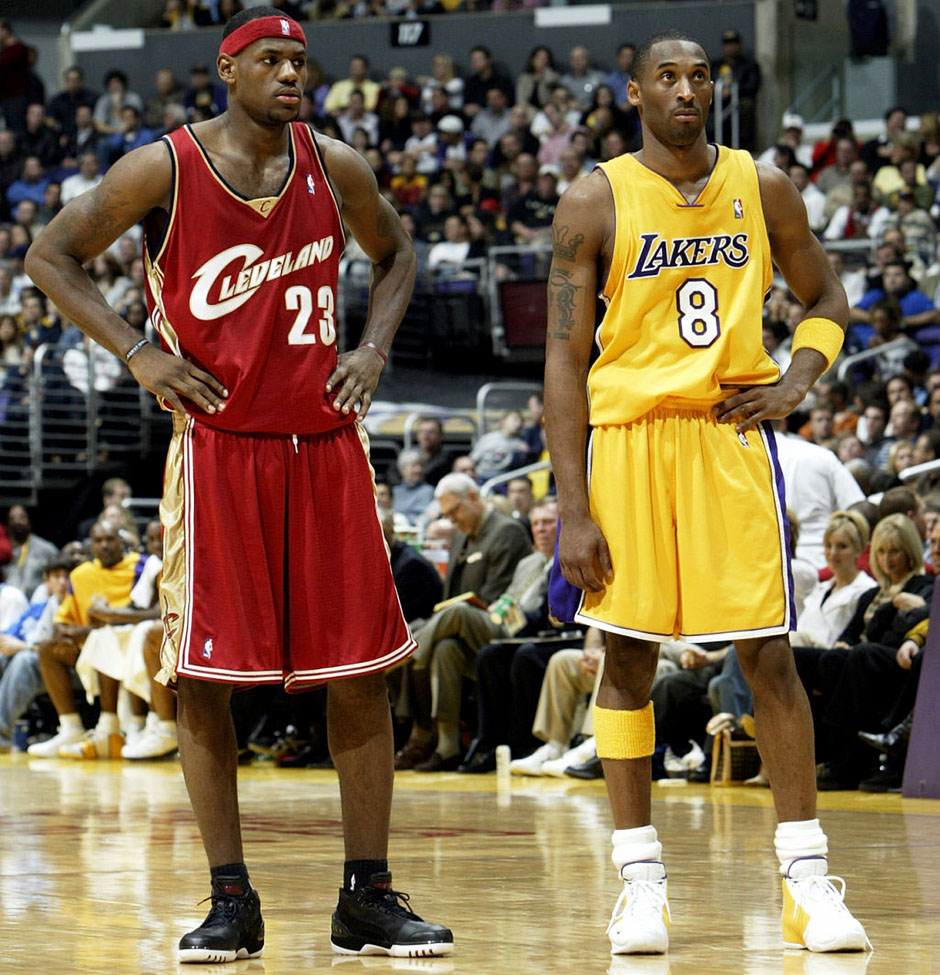 When not in Huaraches, Kobe wore the Zoom Flight 2K3 for a few games early that season, including on January 12, 2004 when he faced off against LeBron James for the first time.

Kobe was also spotted every now and then in the latest Air Jordan 12 retros, the Flint Grey and French Blue colorways—the latter which conveniently matched the Lakers’ throwback uniforms that year.

Although not a signature shoe, Kobe will always be closely linked to the Huarache 2K4, which he debuted in February of 2004. Arguably the greatest Nike basketball shoe from the first half of the 2000s and now considered an all-time classic, the Huarache 2K4 would show up on Kobe’s feet in PE colorways for almost every game for the rest of the season all the way to the NBA Finals. Kobe’s first year with Nike wouldn’t end with a Championship—the Lakers were defeated by the underdog Detroit Pistons—but it proved to be quite a memorable year, nonetheless.

After signing a new 7-year, 137 million dollar contract with the Lakers in the off-season, Kobe was back on the court with his pockets a little fatter for the start of the 2004-05 season. Kobe continued to wear the Huarache 2K4 for the first half of the season in a steady flow of new PE colorways. He welcomed Dwight Howard to the NBA by practically jumping over him with a vicious posterization while wearing a befitting murdered-out pair, and he also kept things interesting with lasered-graphic uppers.

After beginning the season in the 2K4, Kobe debuted its follow-up, the Air Zoom Huarache 2K5 on The Lakers’ Christmas day game in 2004. He would switch back and forth for a while between the 2K4 and 2K5, but then finished out the tail end of the season in the 2K5 full-time. The Huarache 2K5 wouldn’t become a classic and beloved model like the 2K4, but it was a great performer found on the court at every level of play.

Kobe began his third season with Nike by continuing to wear the Huarache 2K5, but with a wild new look featuring a lasered graphic in a stylized snakeskin motif. He debuted the new “Black Mamba” 2K5’s in the season opener against Denver, and also had a home version in white that he wore throughout the first half of the year. In addition to the snakeskin graphic, Kobe also had a version with a lasered map of Los Angeles that released in limited quantities at retail.

On Christmas day 2005, Kobe debuted his first Nike signature shoe, the Zoom Kobe 1. Designed by Ken Link and Kobe Bryant with some obvious DNA from the Huarache line, the Kobe 1 can now easily be considered a classic, usually ranking among the favorite models of many Kobe sneaker collectors. It will also forever hold an important place in sneaker history (and basketball history for that matter) as the shoe Kobe wore during his legendary 81 point performance on January 22, 2006.

For the 2006-07 NBA season, Kobe debuted his new uniform number, 24, his number from high school. To go with his new digits, he began the first half of the season wearing new PE colorways of the Zoom Kobe 1. 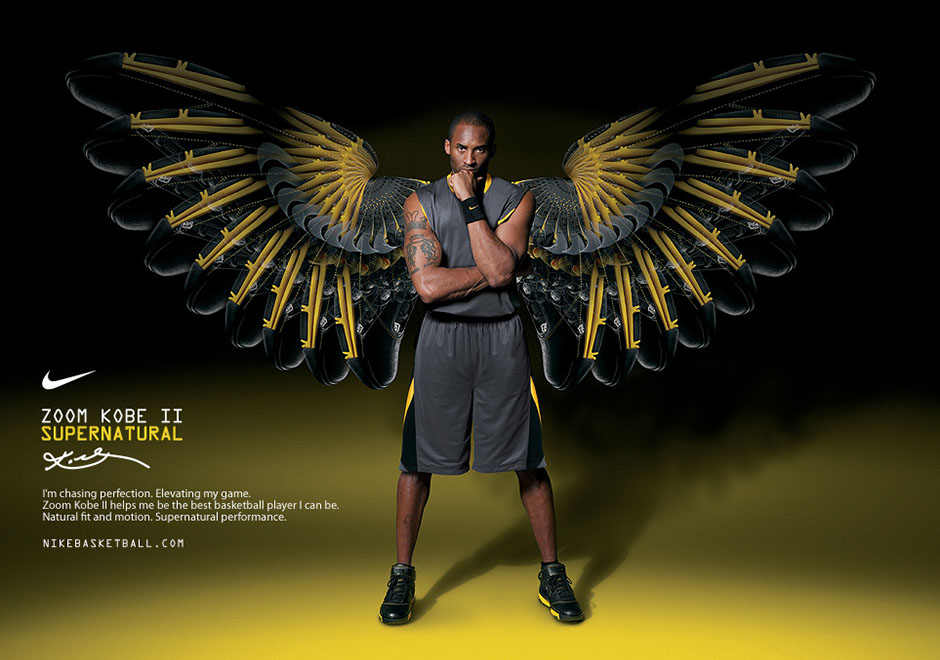 Just like the previous season, the Lakers played the Miami Heat on Christmas Day, and Kobe and Nike once again used the occasion to debut his new signature model, the Zoom Kobe II. His second signature shoe added an ankle strap for support and a Free-inspired outsole for greater flexibility. The Kobe II was also released in a ‘Strength’ version with two straps for added support and ‘Lite’ versions with no straps, but Kobe almost exclusively wore the standard version on court for the rest of the season, including in a special All-Star colorway for the 2007 game where he earned MVP honors. After the regular season, Kobe laced up a “USA” colorway while leading Team USA to a tournament win at the FIBA Americas Championship.

Kobe began the 2007-08 season by bringing back the Zoom Huarache 2K4 in shiny new (literally—they had patent leather accents) PE colorways for both home and road games. Kobe bringing back the 2K4’s further secured their status as a shoe forever linked with the Black Mamba.

Kobe didn’t wait until Christmas to debut his next new signature shoe, as he broke out the Zoom Kobe III a few days early in a marquee match-up against LeBron and the Cleveland Cavaliers on December 20th, 2007. Featuring a no-nonsense, all-performance design embodying his Black Mamba nickname, the Kobe III was the first model Nike designer Eric Avar and Kobe worked on together, the beginning of a very important partnership. The shoe featured a scale-like upper (or waffle-like, depending on your opinion) that dynamically wrapped your foot in woven mesh layered with urethane “netting”. Down below, the full-length Zoom Air cushioning was supported with a carbon fiber spring plate for responsive and explosive feel on the court. Built strictly for performance, the Kobe III wasn’t a popular casual option, but there’s more than a few people that regret passing up a pair at retail now.

Kobe Unveils the Nike Hyperdunk In April of 2008

Who better to debut a revolutionary new basketball shoe than Kobe Bryant? Now the flagship Nike Basketball shoe releasing in a new version each year, the Hyperdunk was born in 2008, with Kobe leading the charge. The shoe that basically changed basketball sneakers as we know them today, the Hyperdunk featured an ultra-lightweight minimalist design and all-synthetic construction, proving a basketball shoe didn’t have to be bulky and made of leather to offer ideal support. While not a signature shoe, Nike chose Kobe to be the face of the landmark Hyperdunk on the court as well as off it, as he appeared in the viral-style (but totally fake) commercials featuring him jumping over an Aston Martin and dunking over a pool of snakes with the crew of MTV’s Jackass. He also arrived at Undefeated LA in a DeLorean on the release day for the highly coveted “Mag” colorway in July of 2008. 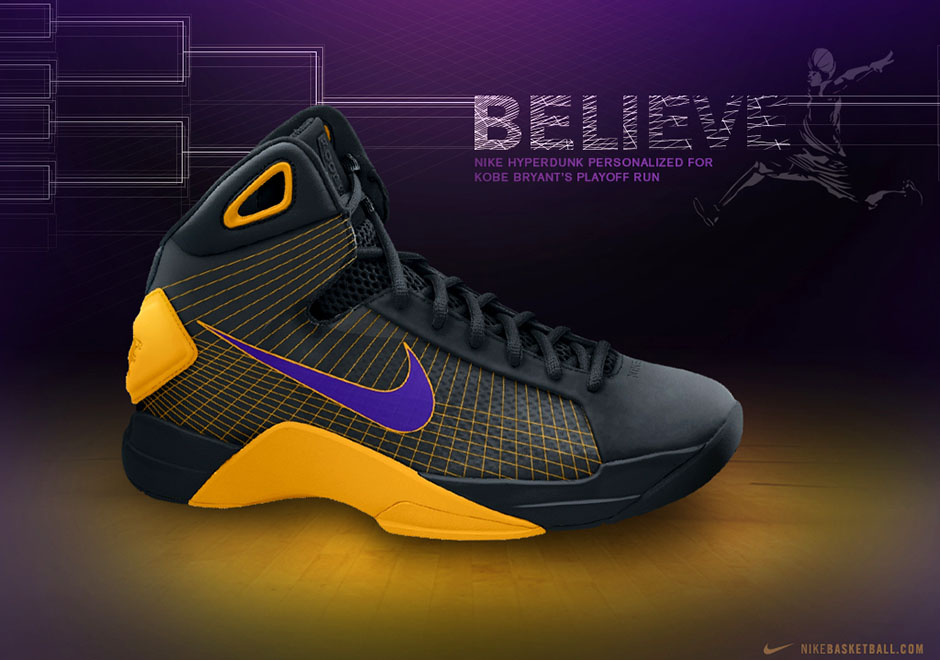 Kobe III On the Road To the Finals

After debuting the Hyperdunk, Kobe continued to wear them for a few games and then switched back to the Zoom Kobe III for the most of the season, all the way to the NBA Finals. Kobe and the Lakers were beat by the new “Big Three” of the Boston Celtics in six games, but the Kobe III would mark his first Nike signature shoe to be worn in the Finals, as well as the model on his feet for his first—and somehow only—NBA MVP campaign.

Fresh off his MVP season in the NBA, Kobe helped Team USA’s “Redeem Team” return to gold medal glory at the Beijing Summer Olympics. Most Nike athletes on the team were wearing the Hyperdunk, but Kobe received a special PE colorway featuring snakeskin detailing. See a game-worn pair signed by members of Team USA below. 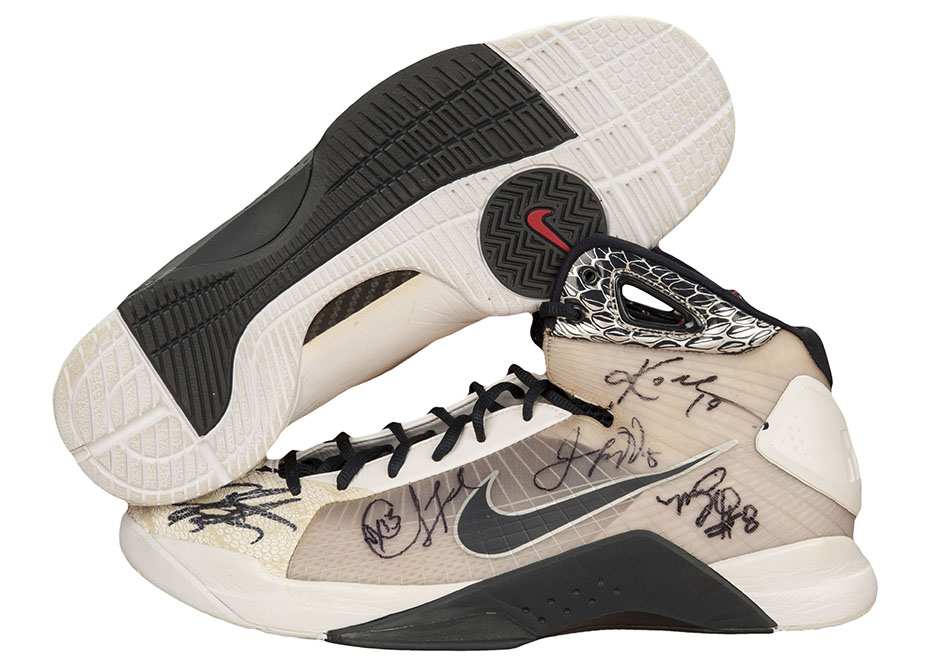 The Next Chapter Begins

An Olympic gold medal would nicely end Kobe’s first chapter with the Swoosh, but the story was only beginning. The upcoming model in Kobe’s signature line, the Zoom Kobe IV, would not only start the next era of his signature line, but also begin the next era of basketball shoes as a whole, thanks to the re-introduction of a low-top design as an accepted performance option. 81 points. His First MVP. Olympic Gold. Kobe’s list of accomplishments were superb in his first five years with Nike, but there was one important more achievement eluding him: another NBA championship. Stay tuned for Part 4 of Kobe Bryant’s 20 Year Sneaker Legacy, where we’ll detail the rise of the low-top and his second era of championships—essential periods to one of the most legendary careers of both sneaker and basketball history.