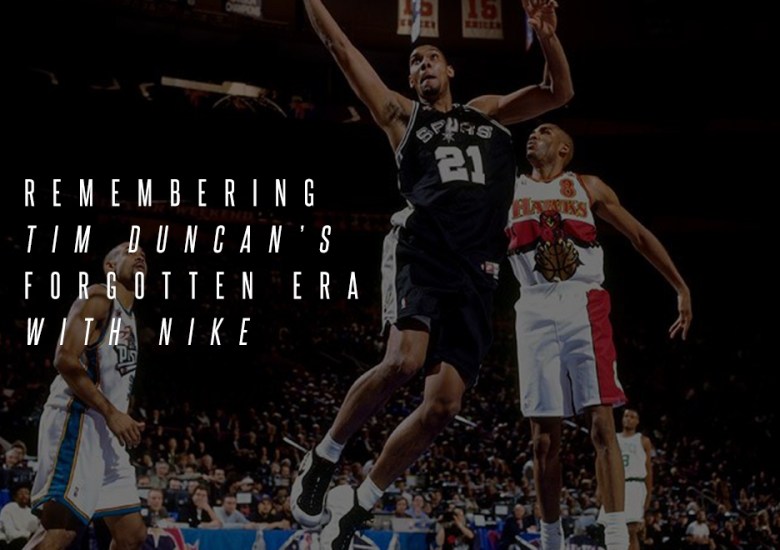 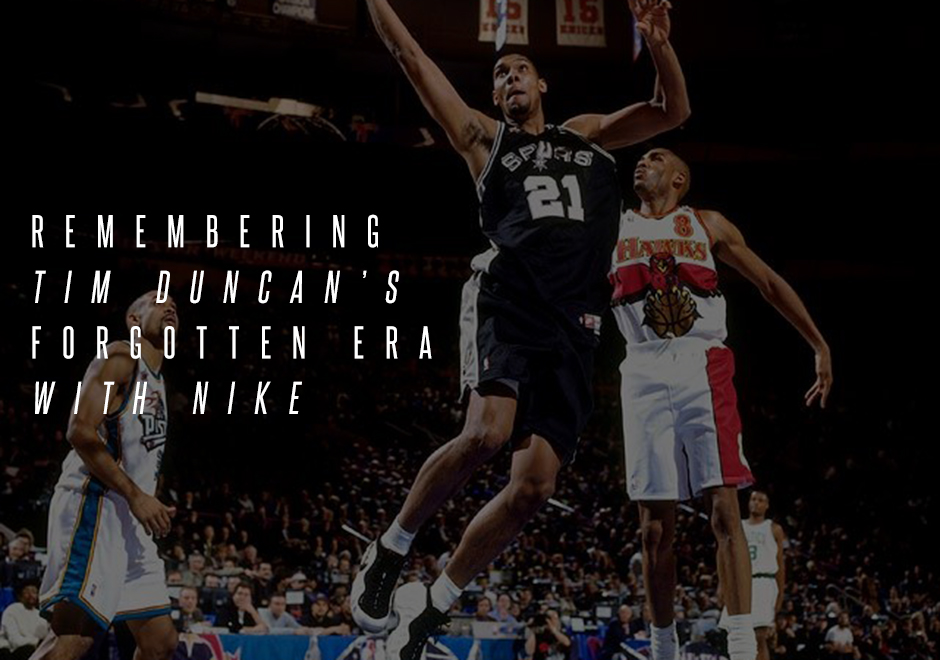 After Kobe Bryant’s retirement at the end of last season, the NBA lost another living legend today when Tim Duncan officially announced he’s calling it quits. The Big Fundamental had a career on the court that rivals some of the all-time greats—including Kobe—but unlike the Black Mamba, most of us won’t remember him for the sneakers he wore throughout his career. Spending most of his nineteen years on the court with the San Antonio Spurs wearing adidas, his sneakers were most often quite an accurate representation of his game: very effective with great performance, but not flashy, or even that memorable at all. No offense to adidas, but can you even recite the name of one of his signature models with the Three Stripes?

However, this wasn’t the case early in Timmy’s career, when he was endorsing Nike Basketball and wearing some of their boldest models of the late-1990’s to early-2000’s era. On this day of Tim Duncan’s retirement, let’s look back to his most memorable sneakers in this brief history of his time with Nike. 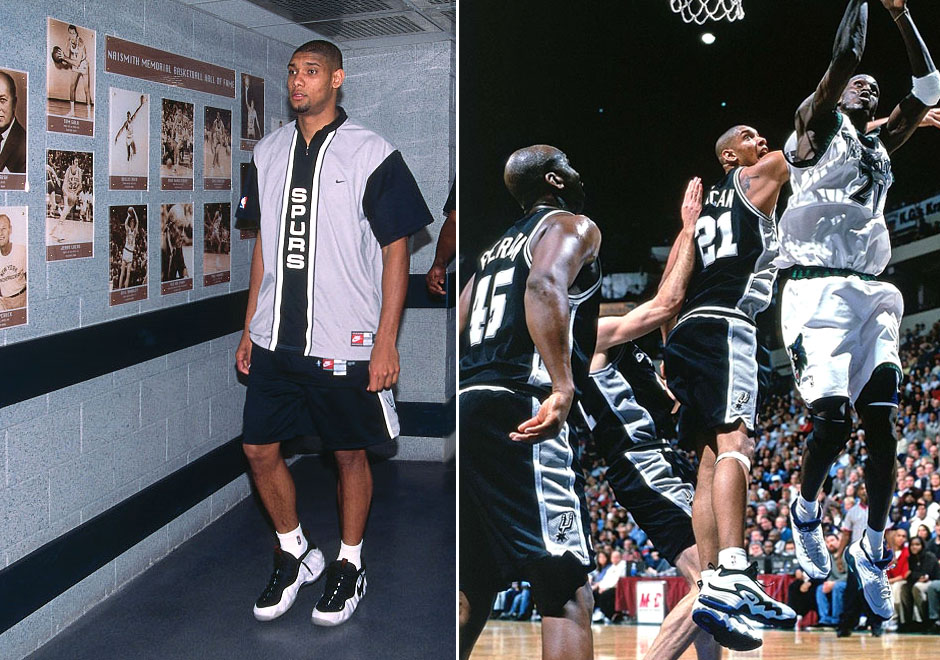 Tim Duncan wasted no time becoming an elite power forward in the NBA, pairing with David Robinson to become the “Twin Towers” of the Spurs and earning a trip to the 1998 NBA All-Star game in his rookie season. Early in his career, Duncan could be spotted wearing Nike models like the Foamposite Pro and Air Max Uptempo 3.0. 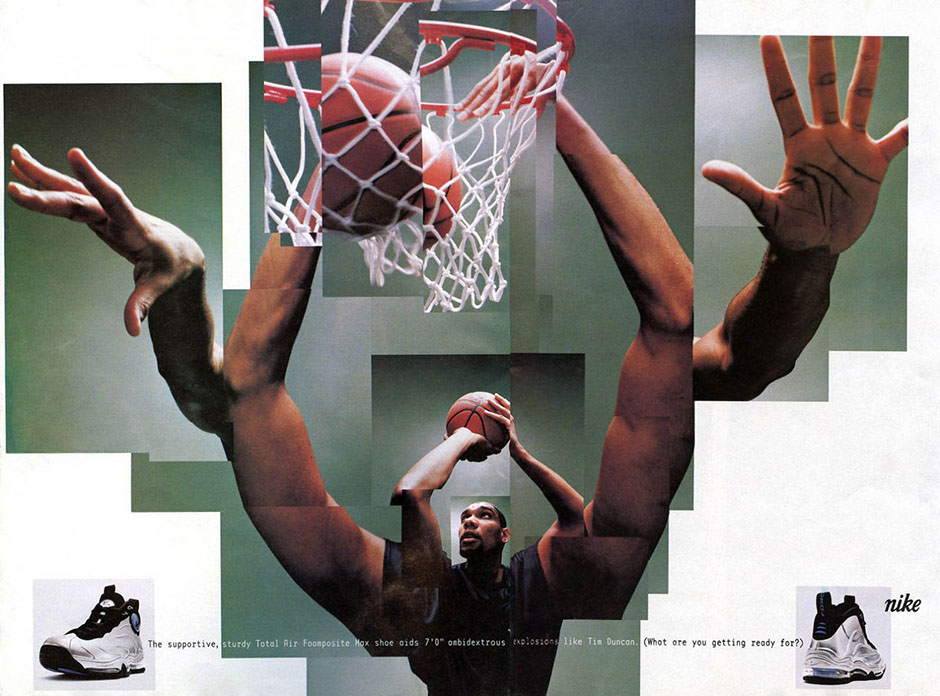 Tim Duncan’s most memorable shoe worn during his days with Nike is undoubtedly the Nike Total Air Foamposite Max. An unofficial signature model, the big and beefy tank-like model featured a Foamposite upper and full-length Air Max cushioning. Duncan debuted the Total Foams during the 1998 Playoffs, and then wore them throughout most of the following lockout-shortened 1998-99 season. 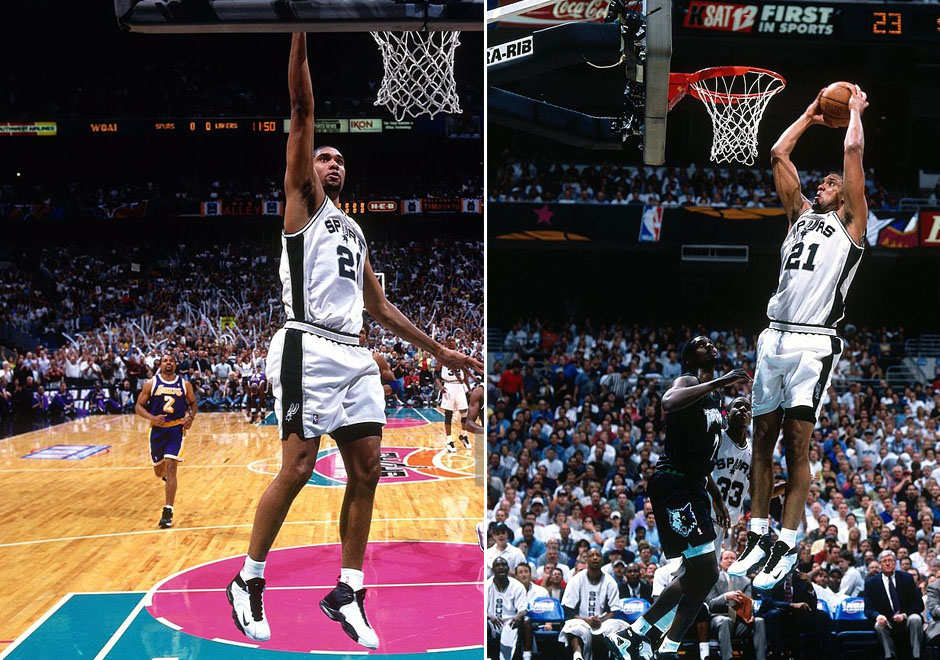 The end of that lockout season culminated in a championship for the Spurs, with Tim Duncan getting a ring in only his second season. The shoes on Timmy’s feet for the championship run were the underrated and unjustly forgotten Nike Vis Zoom Uptempo, the first Nike basketball shoe to feature visible Zoom Air. Duncan wore a PE colorway in white and black. 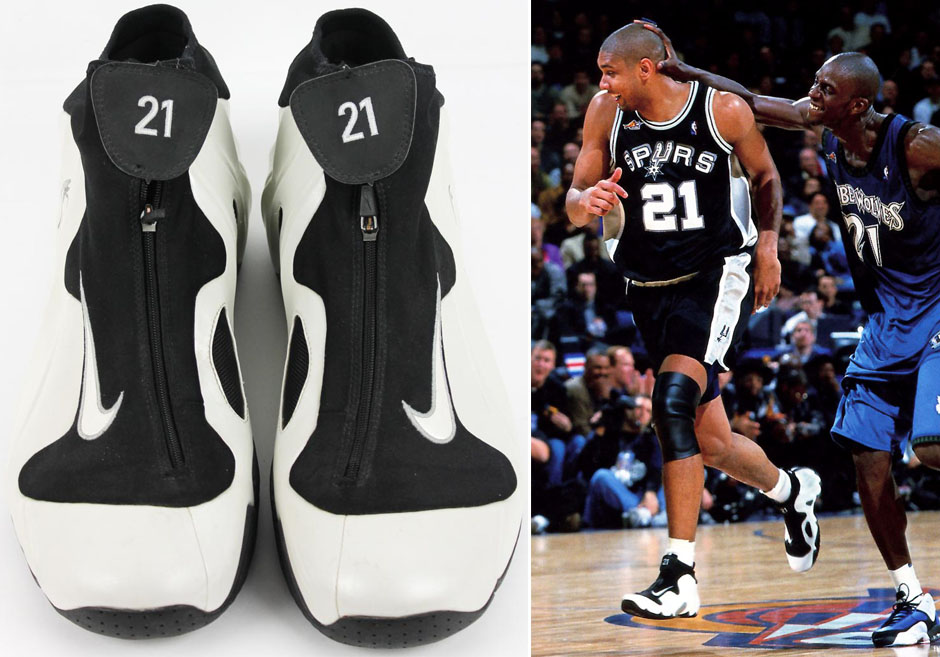 The Nike Air Flightposite would be the next shoe in Duncan’s rotation, which he wore throughout much of the 1999-2000 season. Now considered one of the most classic Nike Basketball models from around the turn of the century, the Flightposite was well-represented by Tim during the season where he would increasingly become the Spurs’ most valuable player as David Robinson entered the twilight of his career. Duncan was among the players to get his own PE of the Flightposite, which featured a pearlized white Foamposite shell, black accents, and his #21 embroidered on each tongue.

Somewhat ironically, the most unusual and wild sneaker The Big Fundamental would wear throughout his entire career would be his first signature shoe, the Nike Air Max Duncan. Released in 2000, the Alpha Project shoe utilized Nike’s short-lived Elastic Foot Web technology found most memorably on the Nike Air Kukini running shoe. The bold laceless design also featured Air Max in the heel and visible Air in the forefoot. Duncan wore his signature model throughout the 2000-01 season. The following season he would wear the Air Max Duncan II, one of the most obscure and forgotten Nike signature basketball shoes ever. In 2003 he switched to adidas, the brand he would wear throughout the rest of his storied and decorated career. 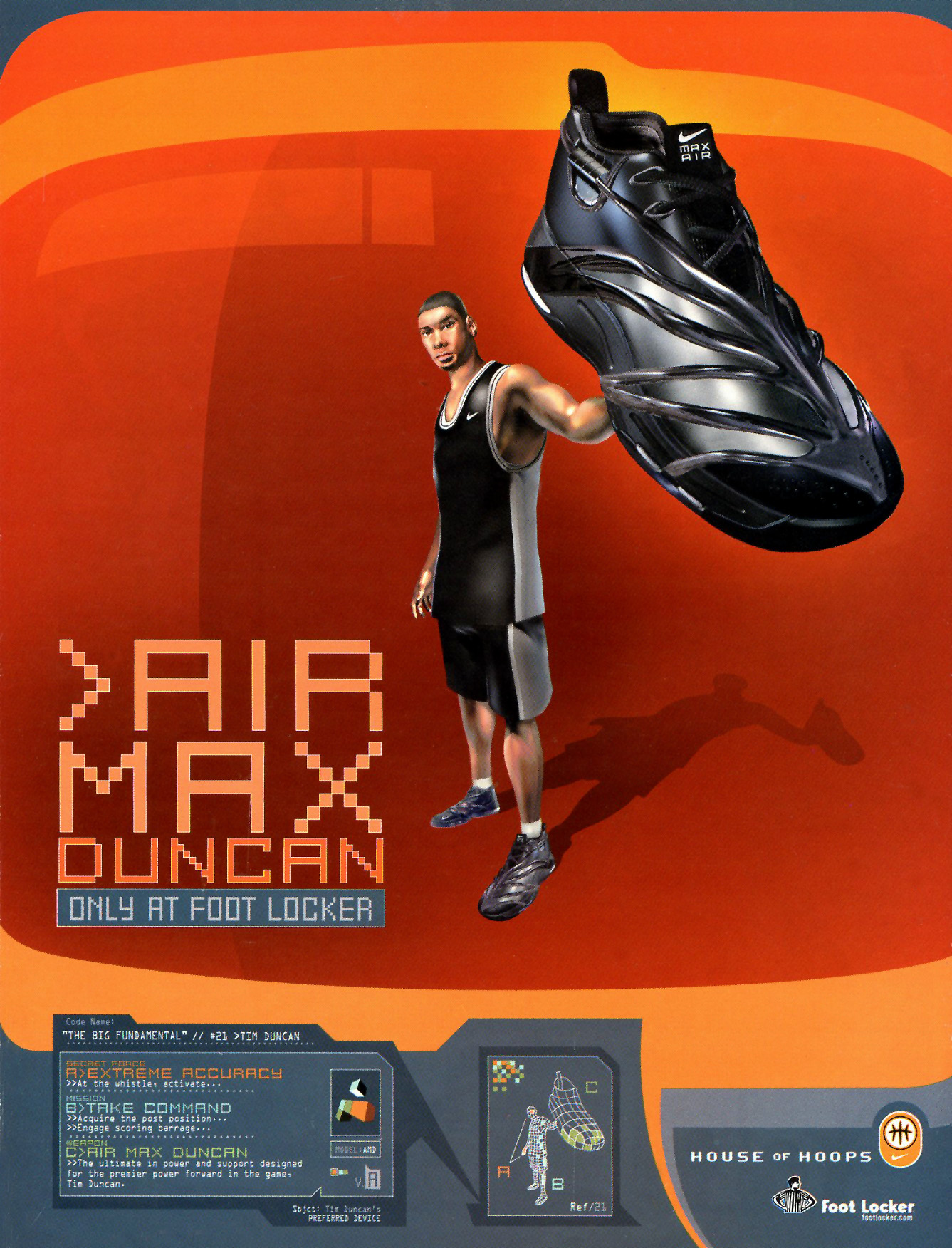 Watch two of Tim Duncan’s Nike commercials here, featuring him helping out the squad defending Kevin Garnett above and his “Playa’s Delight” spot below.