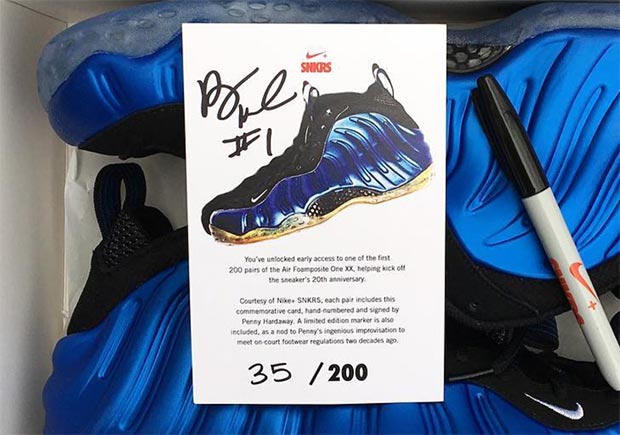 Penny Hardaway and Eric Avar teamed up for something truly special when the Nike Air Foamposite One launched back in 1997. It’s hard to believe that that was already 20 years ago, and the silhouette still looks and feels futuristic thanks to the aesthetic and pearlescent colorways that continue to hypnotize. Nike Basketball is celebrating the model’s two decade anniversary by bringing back a number of original colorways, and they recently launched the Nike Air Foamposite One “Royal” on Nike SNKRS featuring a unique ‘Sharpie’ inspired coloring grid to unlock the pair for purchase.

The Nike SNKRS launch came equipped with more surprises as people who successfully unlocked early access are finding special autographed cards numbered out of 200 with a matching Nike SNKRS marker in honor of the pair not meeting NBA dress code guidlines when it first debuted. Check out a full look and let us know if you were one of the lucky few to recieve an accompanying 1Cent autograph with your recent purchase of the Nike Air Foamposite One Royal.