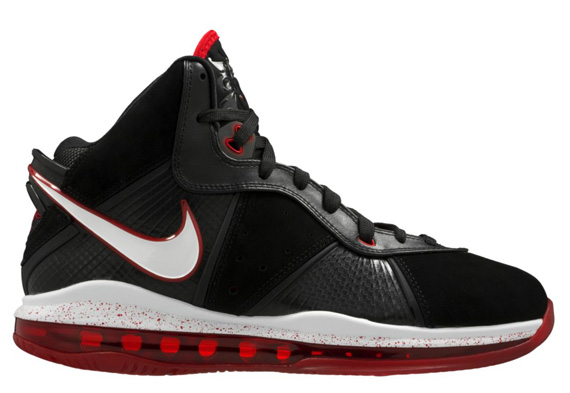 Following the monumental success of the Nike Air Max LeBron VII, the Nike LeBron 8 was released on October 26, 2010 as the second LeBron signature shoe with a basketball-specific 360-degree Air Max outsole. The eighth shoe in LeBron’s signature line would not be without controversy as “The Decision” to take his talents to South Beach to play for the Miami Heat transformed LeBron to a player that it was easy to cheer against, and many speculated his tarnished public image would hurt the sales of his merchandise. LeBron James thrived in the marketing world as a ‘hometown hero’, but that relatable and warming persona was quickly erased when he chose to leave Cleveland, and did so in the most questionable way possible. The one-hour ‘Decision’ in July would be remembered as one of the most controversial moments in sports history, and what soon followed was a media blitz of criticism, questioning, and doubt. 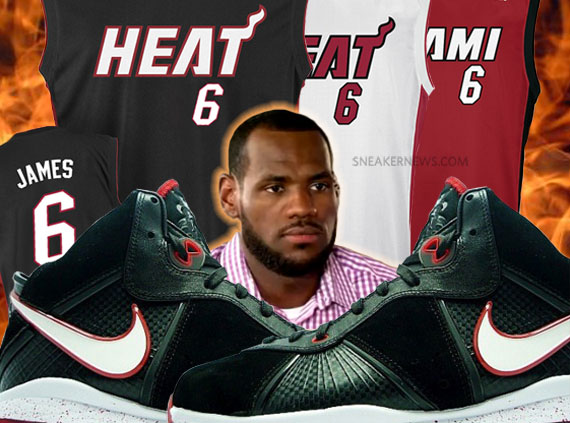 The first release of the Nike LeBron 8 was somewhat of a message to LeBron and Cleveland fans – one that boldly stated “I’m in Miami. Deal with it.” Dubbed the ‘South Beach’, the first Nike LeBron 8 featured a tropical combination of colors like Filament Green, Pink Flash, and Retro teal, mimicking the soothing, summery tones of Miami Vice. A Miami-exclusive release was the perfect appetizer to the wide release of the shoe, and later, Nike would introduced the Nike LeBron 8 V/2 – a lighter, refinished version of the LeBron 8 V/1, using a lightweight Ashiko-style shell upper with a Flywire foundation for stability; LeBron James would debut the V/2 on a much-anticipated Christmas Day match-up against the Los Angeles Lakers. It would later be revealed that the Nike LeBron 8 signature would consist of three installments – the LeBron 8 V/1, the LeBron 8 V/2, and the LeBron 8 V/3 (P.S.); what was already known was that Jason Petrie, the head designer of the Nike LeBron 8, focused on LeBron’s evolution during the course of the season and created a lighter ‘post-season’ shoe for LeBron to wear, but a mid-season replacement was a true ‘first’ for the entire Nike LeBron history, which dates back to 2003.

The LeBron 8 V/1 represented ‘the stalk’, like a lion stalking its prey; in this case, it is LeBron James on the prowl for his first championship ring. The LeBron 8 touched upon the luxurious aesthetic, utilizing rich leather and suede uppers and decorative yet fully functional perforations. The Flywire panels featured carbon fiber panels, a direct inspiration from the Carbon Fiber Bugatti, a monstrous and visually impressive automobile that LeBron calls his ‘dream car’ as well as a child-like motivational tool. The outsole traction pattern was designed to reduce weight and featured a unique multi-flexion figure-8 pod on the heel, allowing LeBron to explode in any direction he wished. LeBron would ride the LeBron 8 V/1 for the earlier part of the season, and eager fans were counting down the days until he debuted the LeBron 8 V/2 on Christmas Day. 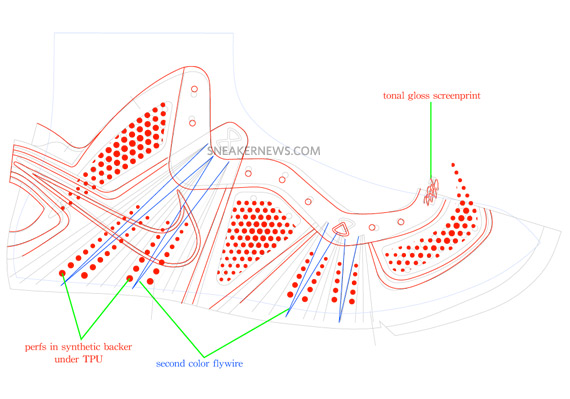 The LeBron 8 V/2 was similar to the V/1 in build construction, but the transformation that Petrie and LeBron had in mind was apparent. “The chase”, as this version of the LeBron 8 is called, represents the instance when lion spots its prey and takes off, describing straight out performance in its most primal form. The V/2 stripped away the unnecessary weight and bulk by removing the leather/suede uppers and using the Ashiko-style shell, allowing us to view the skeleton of the shoe via the transparent composite material, which provided a sleeker look and feel. The LeBron 8 V/2, according to designer Jason Petrie, represented the ‘leaner body’, giving LeBron a much needed boost that was instantaneously experienced when he departing from the heavier V/1. It was a showcase of Nike’s technological advances – and who better to showcase those advancements than LeBron James?

The LeBron 8 V/3, or “the kill”, was completely different than the V/1 and V/2; the final stage of LeBron’s season-long evolution would represent the ultimate push for championship glory. The reveal of the V/3, however, was met with mixed reactions, but it was clear that maximum performance during the Playoffs was the primary focus for the design. The upper of the V/3 took it another step forward and shed the already lightweight upper of the V/2 and replaced it with the Nike’s state-of-the-art Hyperfuse technology, completing the weight reduction phase. The V/3 also departed from the 360 Air Max unit and and opted for a combination of Max Air on the heel and Zoom Air, providing ample cushioning while minimizing weight. Jason Petrie intended to remove any material where it was not needed, and the Nike LeBron 8 P.S. was the perfect example of a high-performance basketball sneaker stripped down to its foundation. 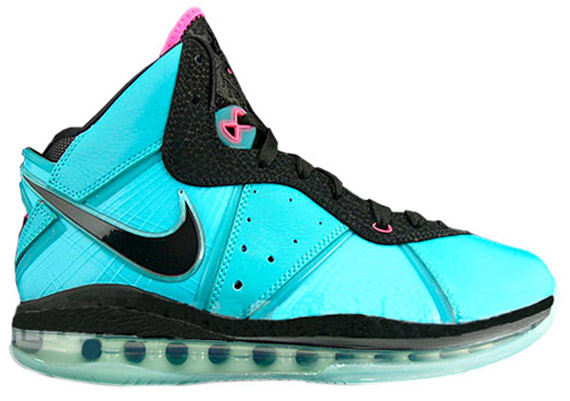 Overall, the Nike LeBron 8’s impact has left a pronounced footprint in the sneaker culture. The ‘South Beach’, which kicked off the LeBron 8, now fetches over $1,000 in the re-sale market, which is rather surprising as it eclipses the market value price of certain LeBron models that have never even released. In addition, the three-part story of the Nike LeBron 8 has set an unusual precedent for the future of Nike Basketball. Will we see another three-part signature shoe from Nike? The LeBron 8 will forever be remembered as LeBron’s first shoe with his new team, but based on the overall success of the sneaker, the future is bright for the LeBron 9 and every installment that will follow.