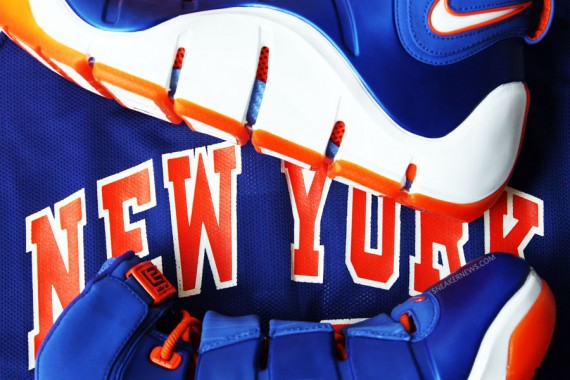 The Nike Zoom LeBron IV was introduced to the public in mid-November after an amassed hype and anticipation that grew from rough sketches that were first leaked on sneaker web-forums. Zoom Air, carbon-fiber plates, free-grooved “no-midsole” construction, and of course, Foamposite made up the LBJIV, and to this day, stands as one of the most popular designs of the extensive LeBron legacy. The Nike Zoom LeBron IV ‘Birthday’ was officially released on December 30th, 2006 – LeBron James’ birthday – as an online-members-only release at Nike.com. The shoes came housed in a special zippered package with an oversized L23 logo stitched on the face of the box and the King’s birthday stamped on a metal plaque on the lower-right-hand corner. The colorway was derived from the Cleveland Cavalier’s uniform from 1987 to 1994, although many attribute blue-and-orange to the colors of the New York Knicks longstanding jerseys. Needless to say, the Birthday LeBron IV was immensely popular in New York City and among Knicks fans, and once the Knicks finally rid themselves of waste and opened up some cap space for the summer of 2010, the Birthday IV-New York Knicks ties became all the more appropriate. To check out the rest of the Sneaker New Classics Revisited Feature, continue on to Sneaker News HD by clicking the link below.

Click to below continue to the full HD.SN Classics Revisited feature.