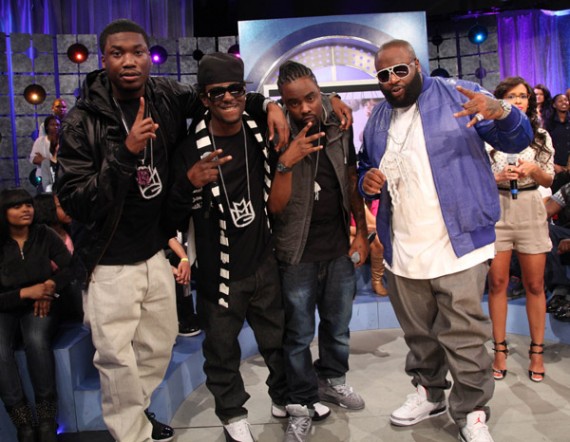 The Rick Ross led Maybach Music Group visited BET’s 106 & Park this past week to promote their upcoming debut album together, Self Made, which will be the first album released under the new Maybach Music Group and Warner Bros deal. The group not only boasts the “Teflon Don,” but also the newest signees to the label including Wale, Meek Mill and Pill. The four artists visited 106 & Park and each had on a different pair of Air Jordan’s. For Ross it was the recently released Air Jordan III in White and Cement Grey, Meek Mill had on a pair of ‘Space Jam’ Air Jordan XI’s, Pill had on the just released Air Jordan XII Low ‘Taxi’s’, and last but not least, Wale was wearing the upcoming Air Jordan V’s in Light Graphite and Wolf Grey which are set to be released in May. Check out some more pics after the jump and let us know what you think.