Next to last year’s Nike Mag 2011 release, the Air Yeezy 2 has been Nike’s best kept sneaker secrets in quite a long span of time. The looming release has been approached with a level of nervousness from both the community of consumers as well as the retailers and Nike itself; just how much mayhem could possibly surround the most stirring releases of 2012? Continuing the unfolding story of the Air Yeezy 2, we stumbled upon some interesting new information regarding the logo spotted on the Air Yeezy 2; based on the findings of NT member youbigdummy, the new logo appears to be inspired by the Bird Gods of Ancient Egypt, which runs consistent to Kanye’s personal interest/infatuation with Egyptian deities and their versatility as iconic symbols in fashion.

You might even recollect Kanye’s mind-boggling 24K gold Horus chain and pyramid rings during his appearance at the 2010 BET Awards, which generated a ton of interest from various pop-culture blogs worldwide; the chain worn around his neck represented the Bird God known as Horus, who is recognized as the God of War and the God of the Sky, so Kanye’s intense affinity to such a powerful icon could, quite frankly, be very well understood. With such a profound sense and conceptualization of fashion, it’s very clear that a lot of thought has gone into the Air Yeezy 2 design, and his demand for perfection is likely one reason why the Air Yeezy 2 never seemed to find the right time for a release – until now. Your thoughts on this newfound detail? Let us know in the comments area below. 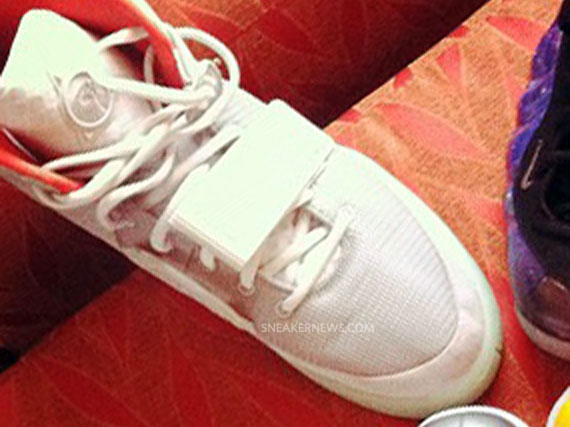