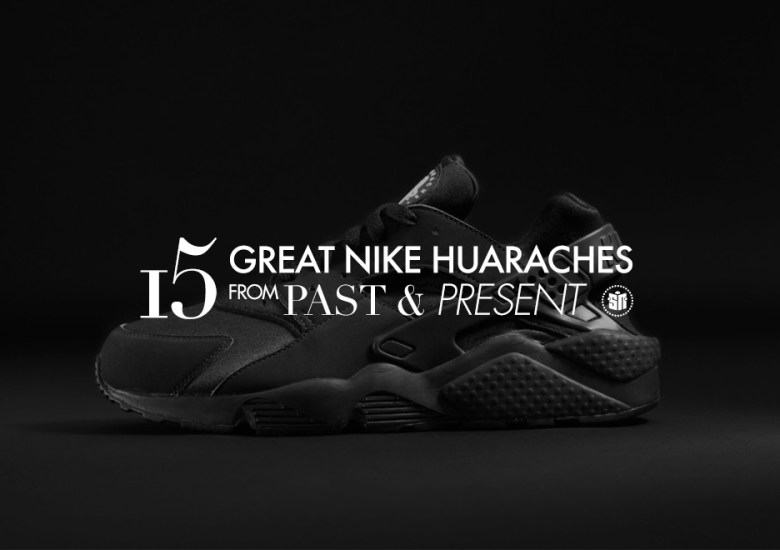 Looking Back at 15 Great Nike Huaraches From Past & Present 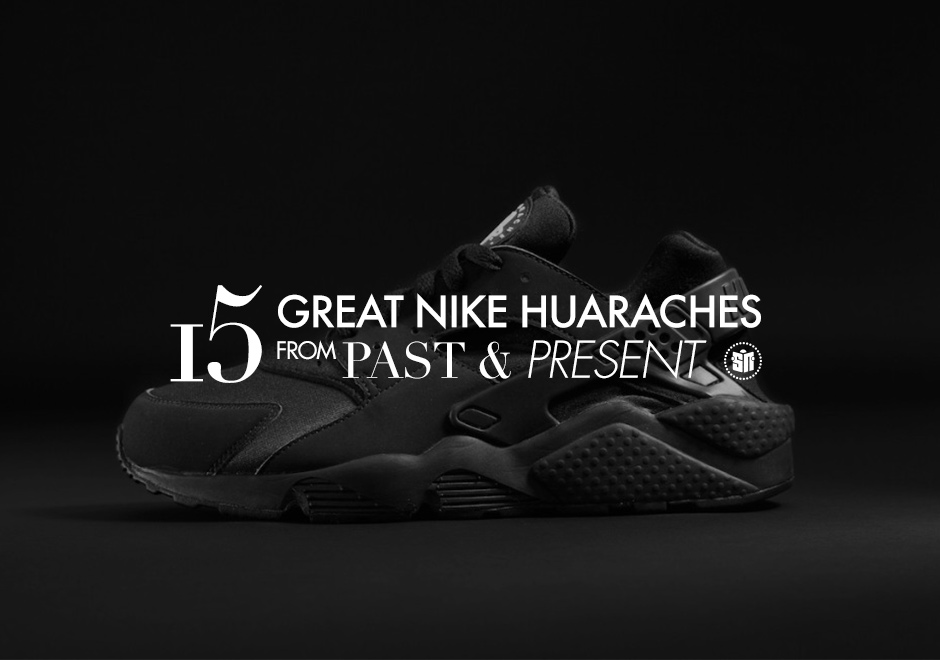 With so many quality retro releases of the Nike Air Huarache in 2014, the iconic runner conceived by Tinker Hatfield and originally debuting in 1991 has become perhaps more popular than ever. Of course, running shoe fanatics have loved it since its inception, but the resurgence of the Huarache this year has given the shoe a whole new life and much wider fan base. You’ll see more neoprene on the streets now then ever before.

For those just being introduced to the Air Huarache this year, and for those more experienced Huarache heads who want to take a trip down memory lane, today we’ll look at some of the greatest versions of the shoe throughout its long and illustrious lifetime. From all the best OGs, to some of the most popular colorways and collabs throughout the years, to the Huarache’s current greatest hits, keep reading for a showcase of the timeless model’s many notable editions of the past and present. 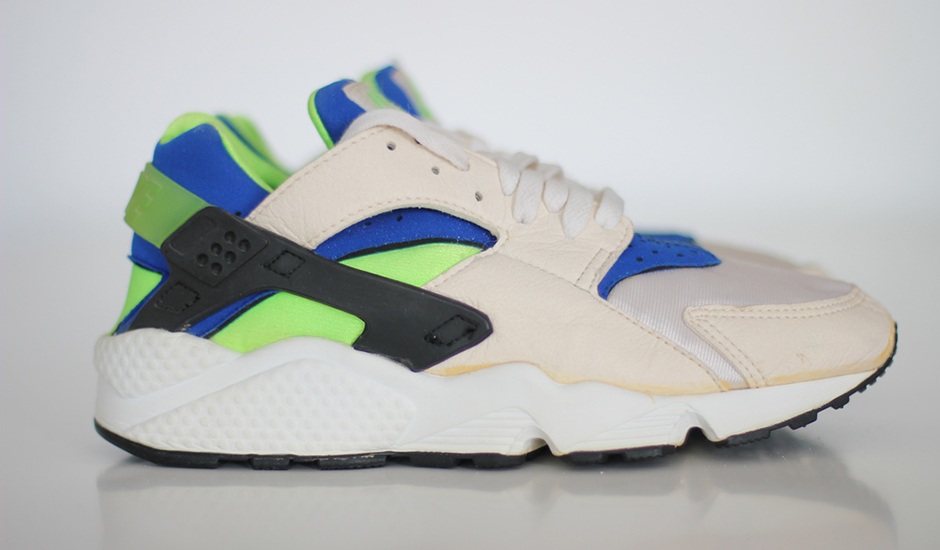 One of the original colorways dating back to 1991, the Scream Green Nike Huarache was an immediate head tuner. Perhaps it was the way that the neoprene mesh glistened in Royal Blue and Scream Green to contrast the clean white found throughout the supportive overlays. Or maybe it was the fact that this shoe called itself the signature sneaker of futuristic television character Buck Rogers – but it was memorable enough to get a bring back in 1999 and wasn’t forgotten 15 years later when it was retroed again earlier this year. An iconic colorway for an iconic sneaker. 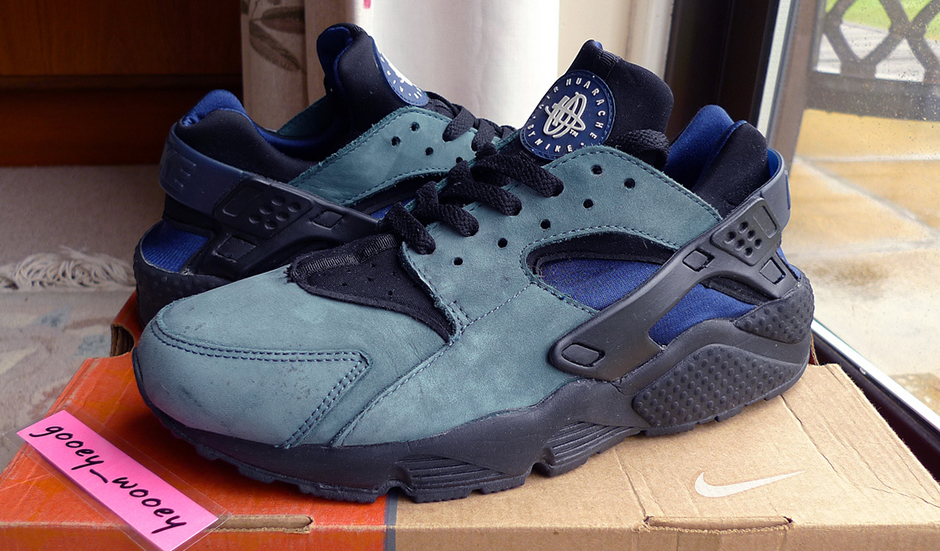 As if any OG Air Huaraches weren’t rare enough at this point, these original Limited Edition joints are basically impossible to find. One of the first examples of taking a performance shoe and giving it a more casual-ready material makeover (think the EXT editons of current Nike Basketball models), the “Slate” LE featured buttery soft nubuck leather in super clean shades of blue and black. These actually retroed in 2000 (pictured here), but wouldn’t you agree it’s time to bring them back again? 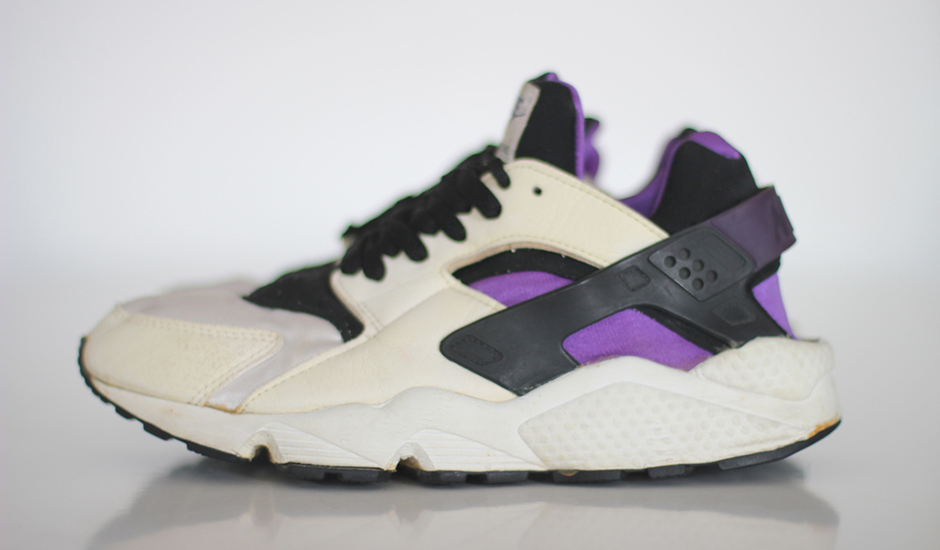 Basically, every original colorway of the Air Huarche approaches perfection, and the “Purple Punch” version in a simple blend of white, black and purple is no different. Michael Jordan wore them after the Bulls won their second Championship in ’92. Jerry wore them in “The Subway” episode of Seinfeld. And we wish we could wear them right now. But somehow these beauties have never been retroed. It’s time for that to change. 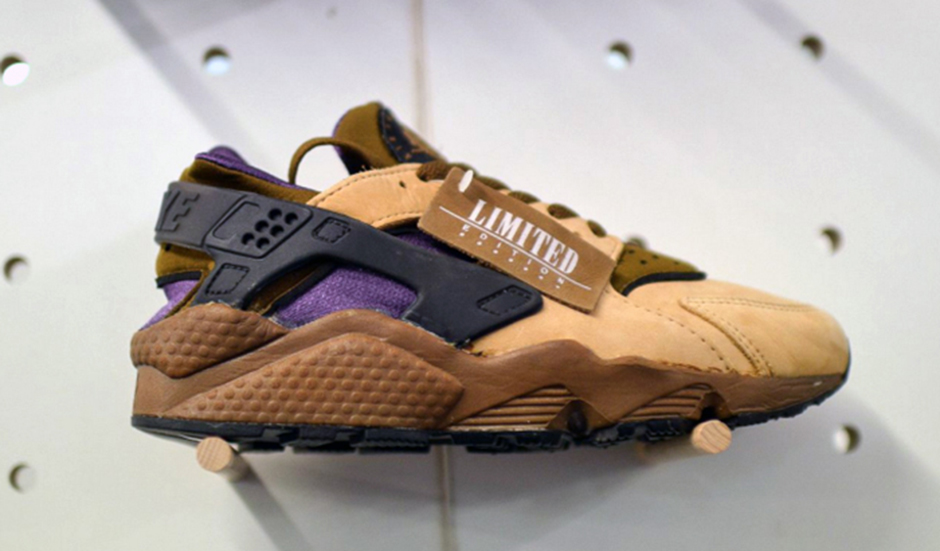 Another one of the OG LE makeups of the Huarache, this excellent color combo in premium nubuck of browns, purple and black looks like it fit right in with the classic early 90’s ACG line. Without a doubt one of the best Air Huarache colorways ever. 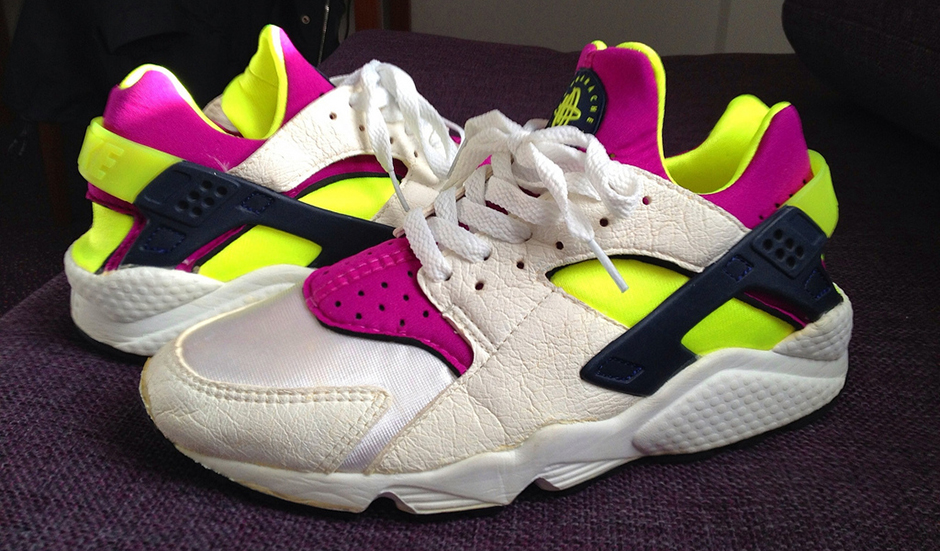 Yet another of the amazing OG colorways. Whoever was doing colors for Nike at this time period was obviously a genius. Arguably the most underrated OG Huarache colorway of them all, this version combines purple with the granddaddy of Volt, Hot Lime. 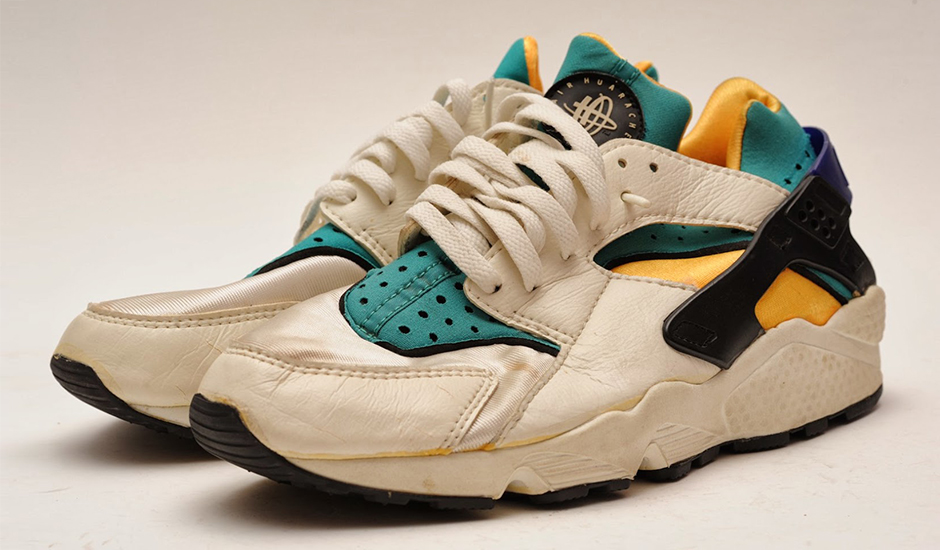 Have you hugged your feet today? When the classic Nike slogan was introduced alongside Tinker Hatfield’s 1991 gem in the Nike Air Huarache, this White/Blue Emerald-Resin look is what was showcased – and for good reason. A teal like sock liner and a golden yellow worked together to give us a look that was a little more low-key than the stand out shades on the Scream Green, but it grabbed our attention nonetheless. It was retroed back in 2013 as a UK exclusive. 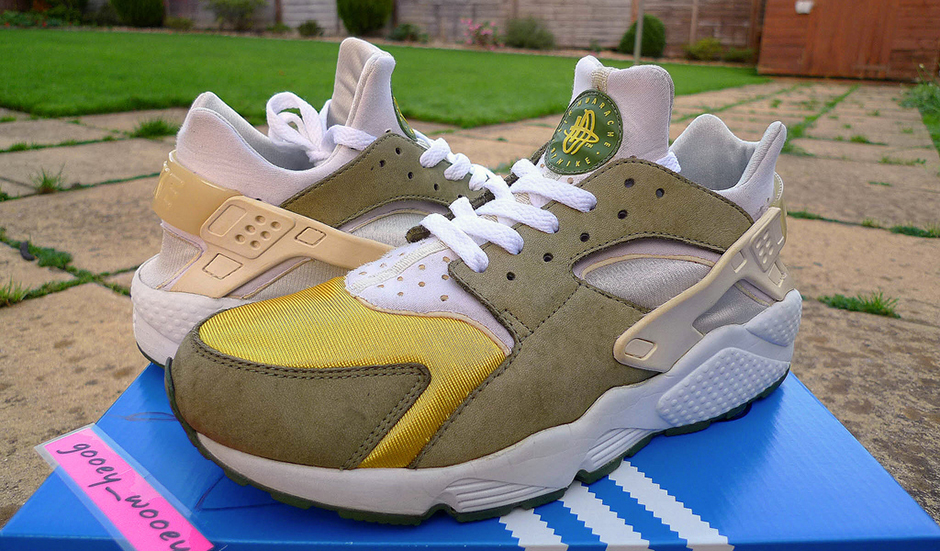 Long before collaborations were the norm, Stussy was one of the only outside influences lending a hand into creating product for Nike. Pick your poison – there was the tonal brown pair that exuded a casual sensibility later seen in the 2003 Escape Pack with just the right touches of red on the Huarache logo, or their was the mossy green overlay complete with a mismatched yellow toe box. Truly original, we’d love to see these guys return, or at least see Stussy given another shot at the silhouette. 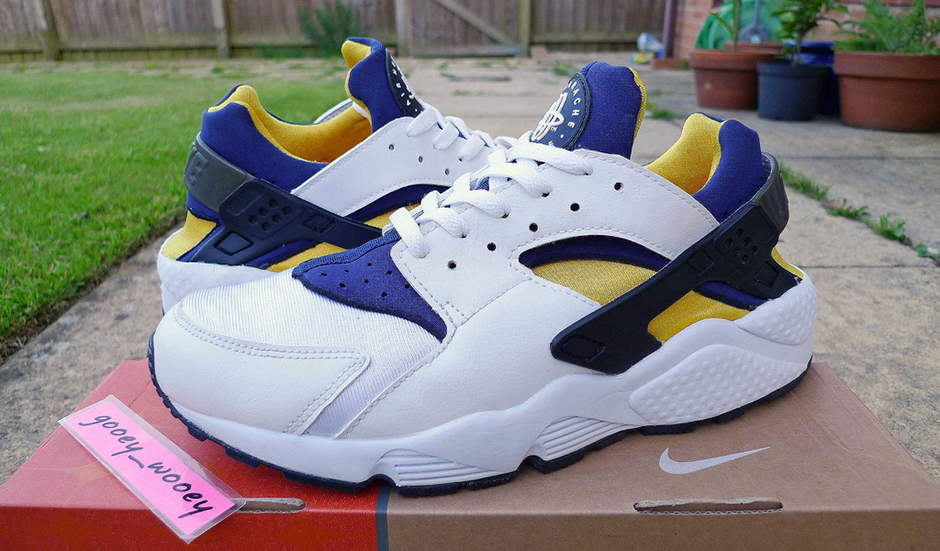 This colorway may come off as just another clean and simple release from the early 2000s, but the varsity maize and midnight navy selection is clearly a nod to the Michigan Wolverines, who popularized the Flight Huarache during the Fab 5 era. With that said, Nike really needs to capitalize on that opportunity with the current retros! 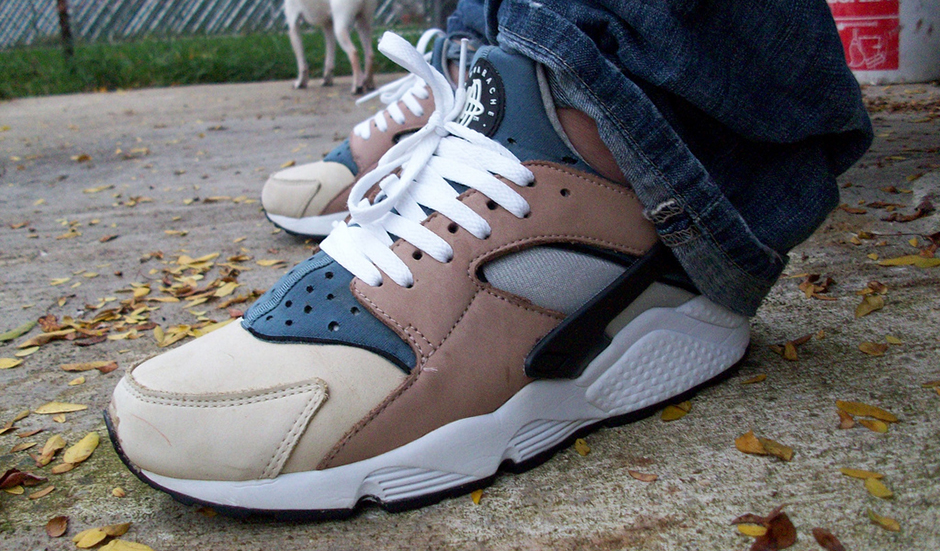 Nike Sportswear is bringing back the Escape Pack this weekend, but for those not up to speed on this concept, let’s bring it back to 2003 when this concept officially broke use. This outdoor-inspired capsule emerged on select Retro silhouettes like the Air Huarache, but unfortunately, it won’t be back in 2014. 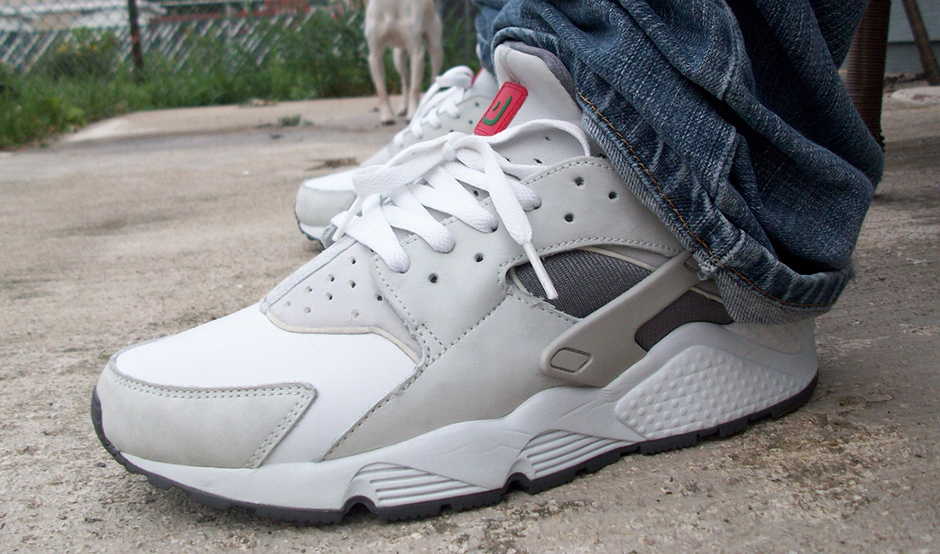 One of the more unknown of special edition Huaraches is the Wings & Waffles releases of 2004. The “Wings & Waffles” Pack celebrated Moroccan runner Hicham El Guerrouj and his record-setting run of the 1500 meters and was inspired largely in part by the uniform he wore during that event. It’s one of the few, or likely the only Huarache to feature a different tongue label, and also feature some incredible insoles. 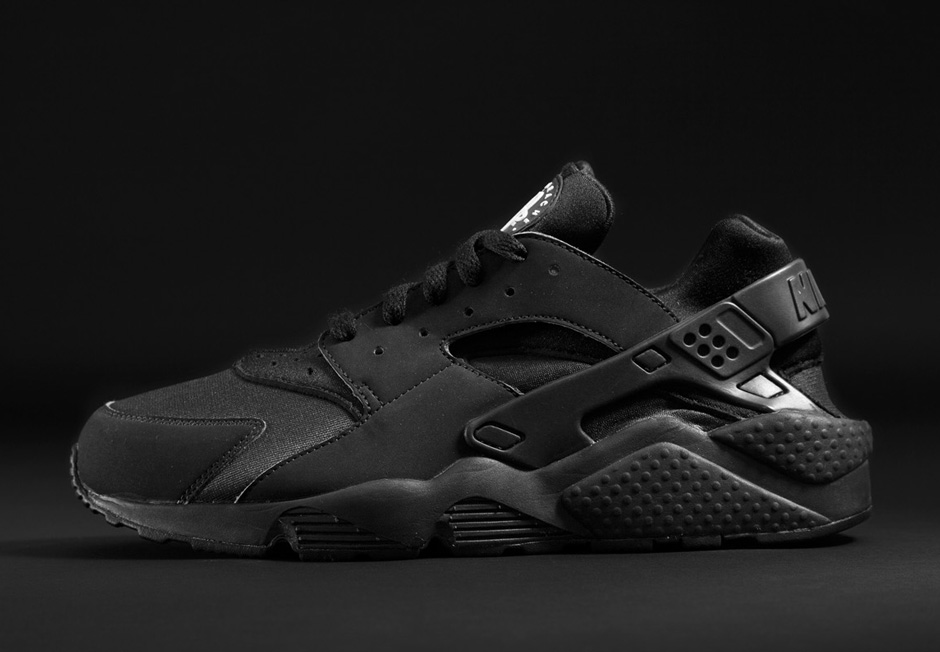 This is a pretty simple choice. Blacked-out looks always look good on classics silhouettes, and the Air Huarache takes to the “triple black” look as good as any other sneaker out there. The high-quality leather version from 2004 would be our first choice, but the all-black Huaraches from this year were great, as well. 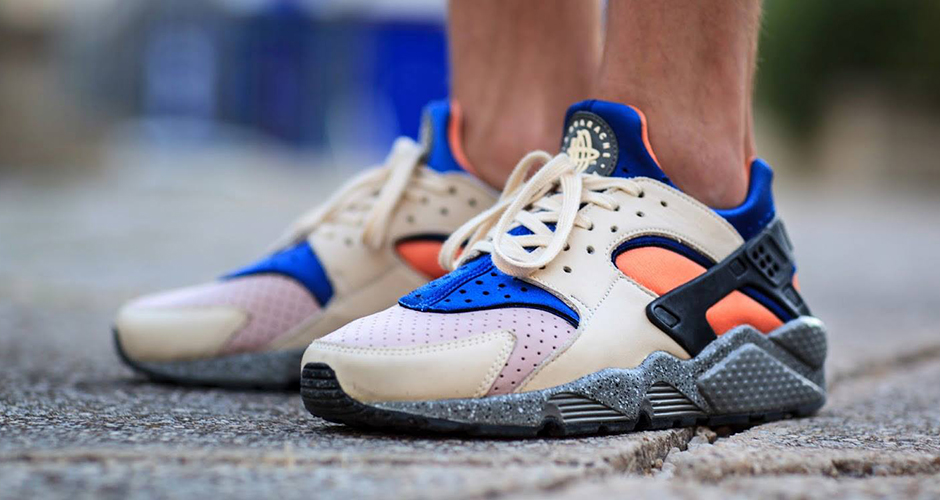 The Air Huaraches went on an extended hiatus after they last appeared in 2005 and only released in select colorways in Europe. But the shoes came back at full force in 2007 with the “ACG” Pack, which showcased the neoprene runners in bold colorways like we’ve never seen. This trio flawlessly adapted the signature colors of the All Conditions Gear set while paying homage to a few OG releases. Today, the ACG Pack is considered to be among the best releases ever and require quite a bit of cash to attain. 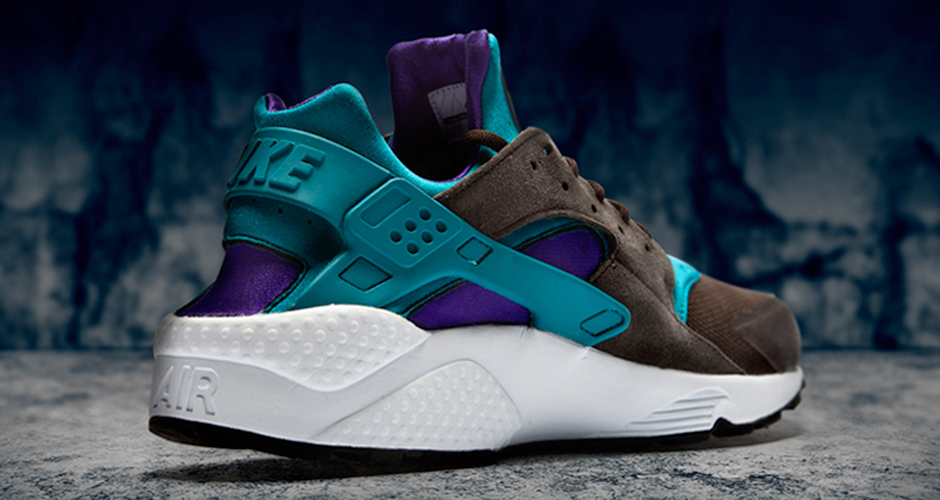 Back in 2013, Size? was the proud recipient of a number of Huarache exclusives, and in this “Teal Pack” of releases, the UK retailer reinserted two honored early-90s running models back onto the scene. The return of the Air Huarache or the Air Max 93 only marked the beginning of both shoes, but did anyone see Huarache domination coming? 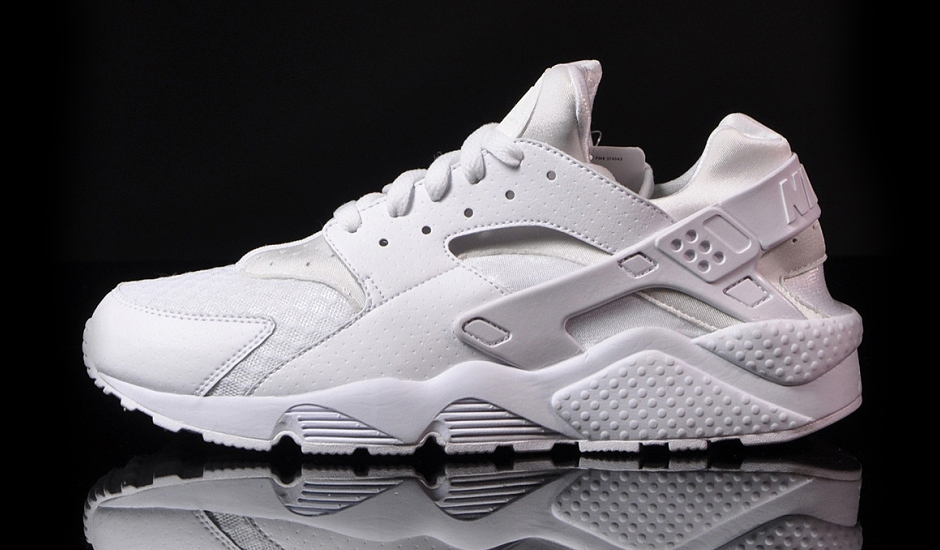 The all-white Huarache release was the timely meeting of two massively popular trends in the street wear scene. The Air Huarache sans color was one of the hottest releases of the year and commands a hefty price-tag in the after-market – especially since no signs of a release in the U.S. has been noted. 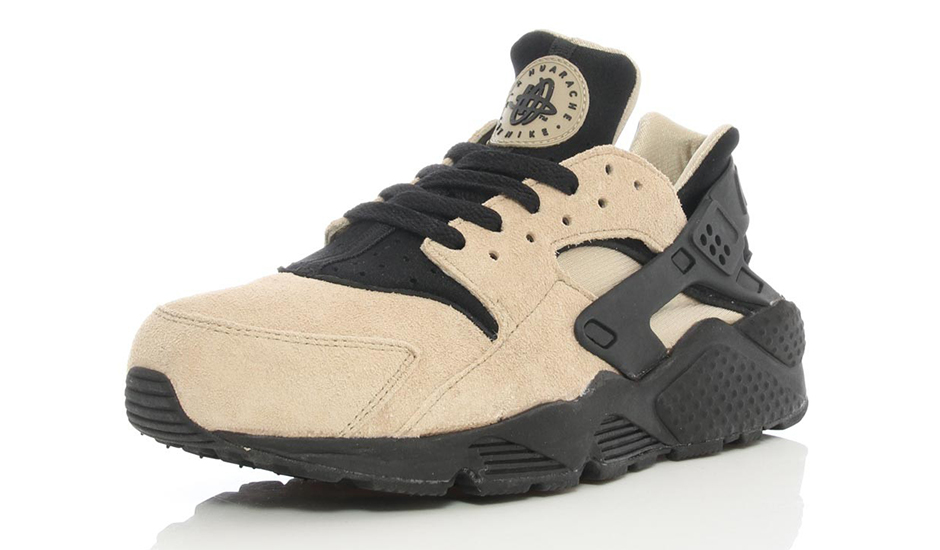 The Cool Grey Huaraches that dropped earlier this year championed a premium brushed suede to contrast the neoprene foot sock, but the other pair that did the same – this Flint Spin – had the upper hand based on how the earthy tone brought the release together in a similar to some OG colorways like the “Toadstool”.