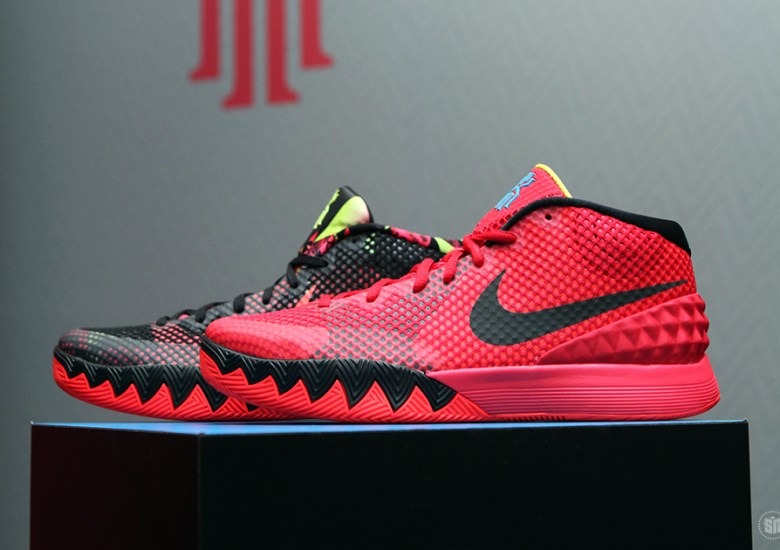 An Interview With The Next Great Nike Signature Athlete, Kyrie Irving 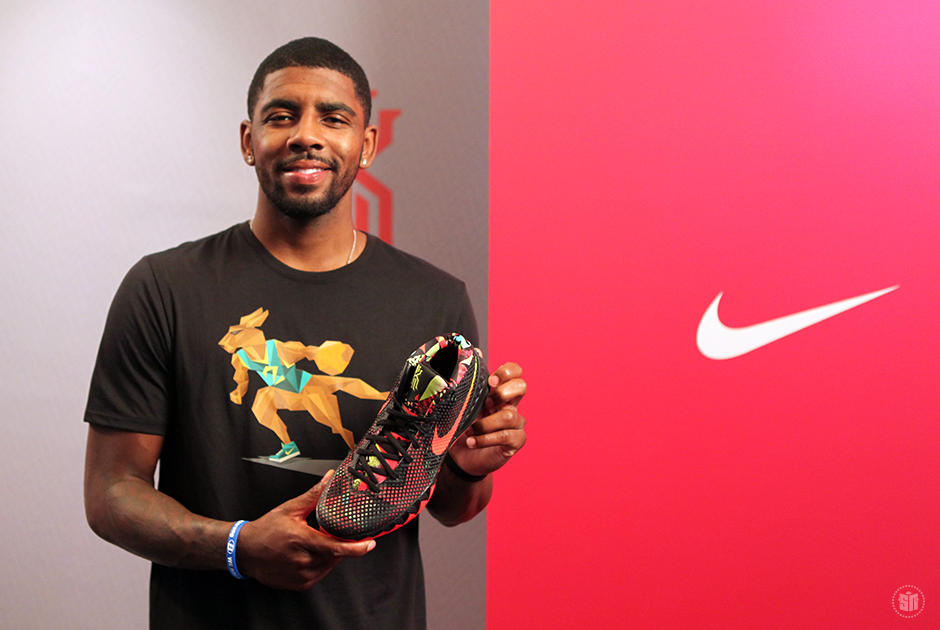 Timing was absolutely key for Nike when it chose to name Kyrie Irving as its next signature basketball athlete. For the star guard, it all seemed to fall into place at the right time; now in his fourth NBA season as a pro, Irving is poised for championship contention thanks to the franchise’s commitment to keep him around and to build a roster that would guarantee success, and the high prospect of winning combined with a high level of talent and charisma fit right in to what Nike deems worthy of a signature athlete. Even with a teammate in LeBron who is considered the godfather of Nike Basketball, Kyrie is stealing the spotlight on most nights with his unstoppable offense and infectious smile.

And so, the signature Kyrie Irving shoes were born, beginning a brand new bloodline that will not only tell its own distinct story for years to come, but will carry over the healthy DNA of signature shoes of the past. We got a first look at the Kyrie 1 back in August, so it doesn’t need to be said that keeping the Kyrie 1 a secret until the official launch was a tough task. We spoke with Kyrie about being the newest member of such an exclusive gang of ballers, and as expected from the former Blue Devil, his answers were as thoughtful as his crossovers are crippling. Check out the interview below, and be sure to stick with Sneaker News for the latest on the Kyrie 1.

The Nike Kyrie 1 will officially release in the “Dream” colorway on December 23rd. 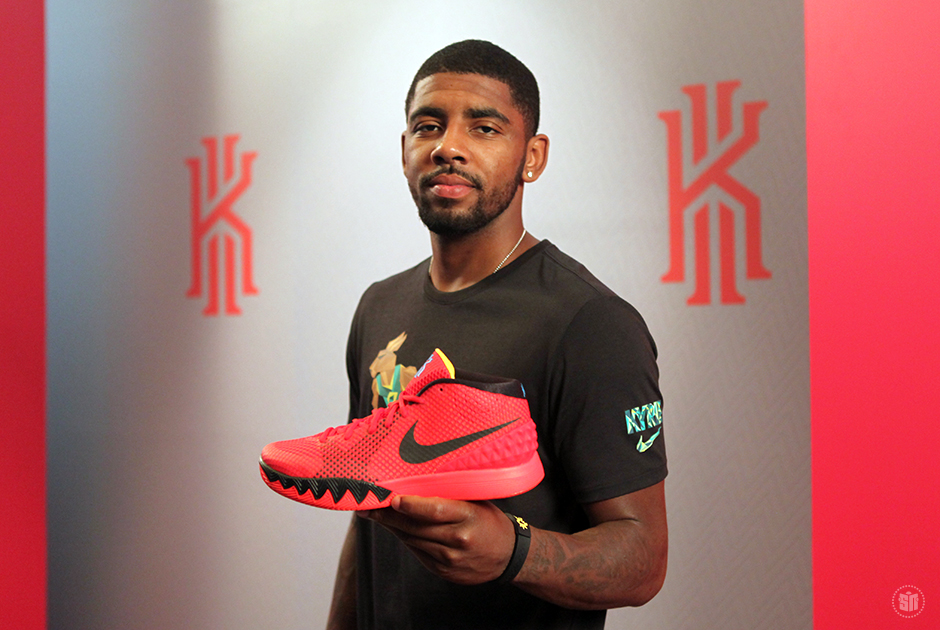 Sneaker News: You’ve been part of the Nike Basketball family for a while now, starting from your days at Duke and leading up to the present day. At what point in that span did they introduce the idea of give you a signature sneaker?

Kyrie Irving: They told me in the past year. There were a few things in the works that we talked about last summer and it started to come to life. We started with a few ideas and it eventually materialized into this shoe. It began with a lot of my inspirations, a lot of Nike innovation, and we came up with the Kyrie 1.

SN: Describe the level of involvement you had in the design of the Kyrie 1. Is there anything you asked for specifically, knowing that Nike pays incredible attention to the wants and desires of the athlete?

KI: I just wanted a shoe that could hold me down on the court, that’s tailored to my game, and was just a great fit, you know. Something that’s great for cutting and being quick on the court. That’s kinda what separates me from a lot of people on the court…i’m not blazingly fast, but I know I’m one of the quickest guys with that first step. All the cutting I do, all the crossovers and the dribbling, all of that was involved in creating the Kyrie 1. So together we came up with this great shoe, and i’m glad it’s ready to go! Not only is it the perfect shoe for my game, but the colorways are on point – it’s gonna be bright and exciting. 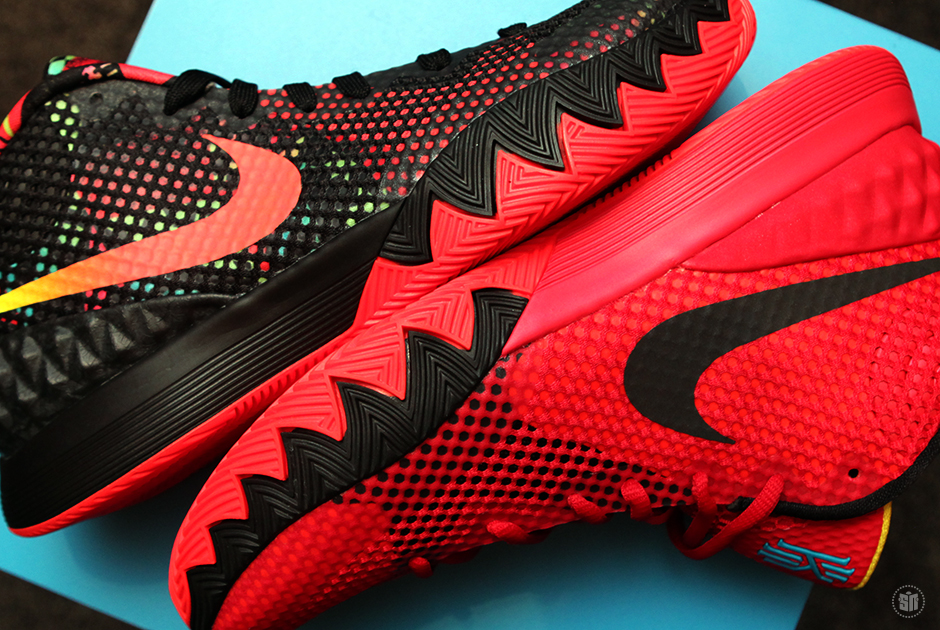 SN: With Nike Basketball signature shoes, it’s all about that first impression and that powerful detail that sticks out. For the Kyrie 1, it’s the sole on the fore-foot with that distinct zig-zag design. How does that represent you and your game?

KI: There are a couple of pictures of me out there when i’m doing a crossover, and my leg is basically sliding and dragging on the court with every shoe that i’m in. Leo Chang did an awesome job at reviewing my natural movements on the court and making that a part of the shoe. That traction right there makes the utmost difference because instead of just planting my foot all the time, I position them at almost a 90-degree angle. The front of the shoe is definitely inspired from my type of game.

SN: Another key component of a new signature shoe is that amazing launch colorway, and i’m noticing you’re wearing a Nike Australia t-shirt (a kangaroo dribbling a basketball). Are your roots in Australia something you’d like for Nike to emphasize and perhaps give a strong identity to? Or is there a specific color on a shoe you’d like to see on your shoes?

KI: Honestly, the t-shirt is something they surprised me with! This is my favorite so far and I really don’t ever forget where I came from. I mean, i’m American now obviously, but I do have my ties back there and so does my family. So there are a few things I threw in there that throw back to that. But with the colorways, what was most important to me was the design and the function, and I know Nike will come through with colorways that will speak for themselves. 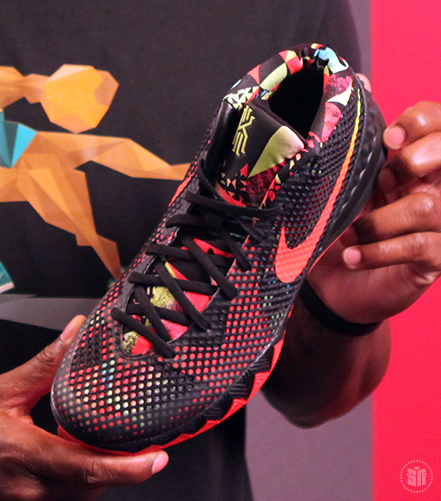 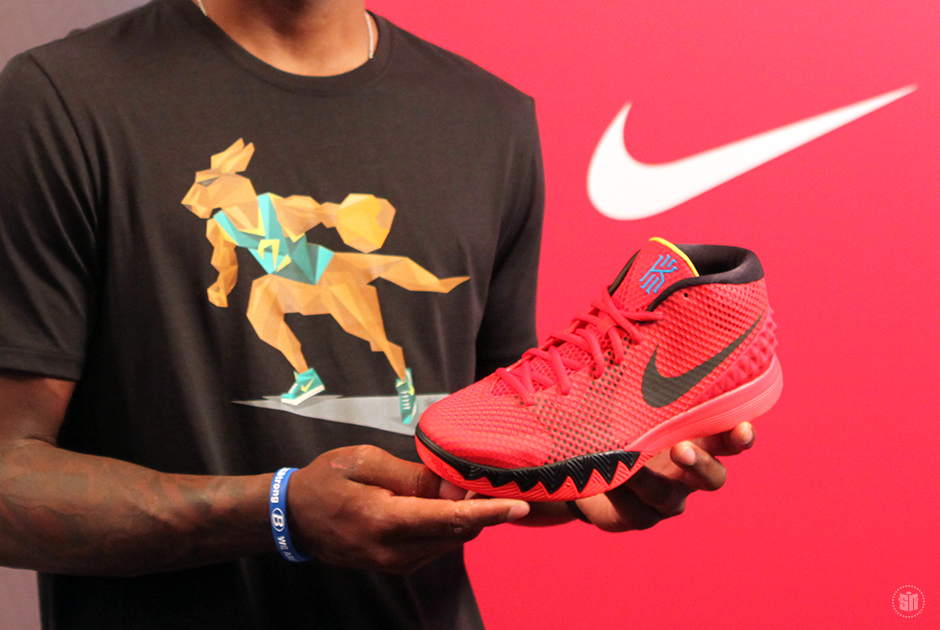 SN: Now you’re joining an incredibly exclusive fraternity of guys that include Jordan, LeBron, Kobe, Barkley, Penny…is there any sort of pressure to elevate your game and to perform at that high standard that not only you put on yourself, but that being a signature athlete does?

KI: Absolutely. You know, the need to elevate your game happens every year regardless of a signature shoe or not. But the shoe is a dream come true! I want to take full advantage of it and run with this opportunity that Nike gave me to impact the youth the world through a shoe. Obviously that comes with responsibility, and i’m ready for it. 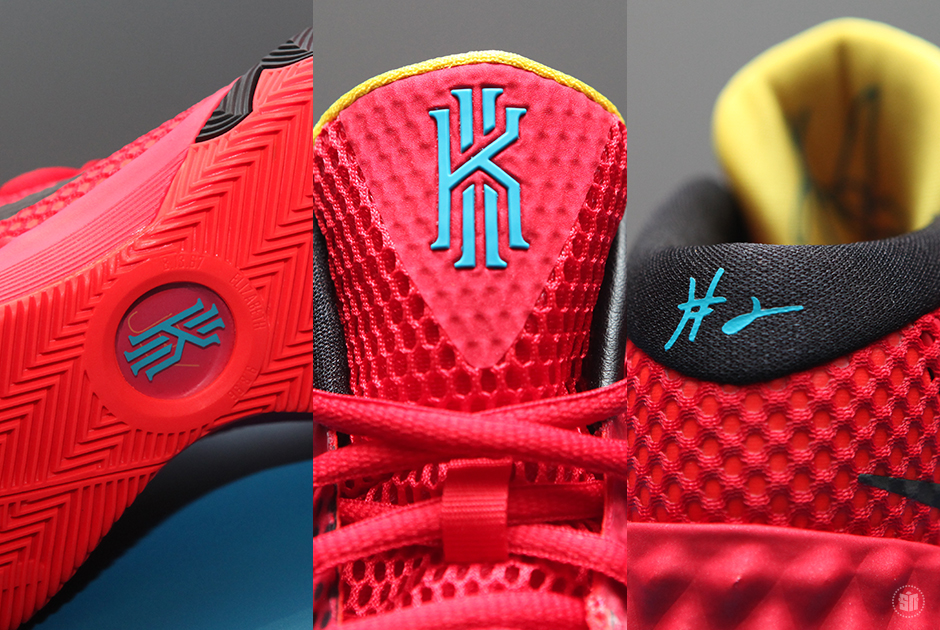 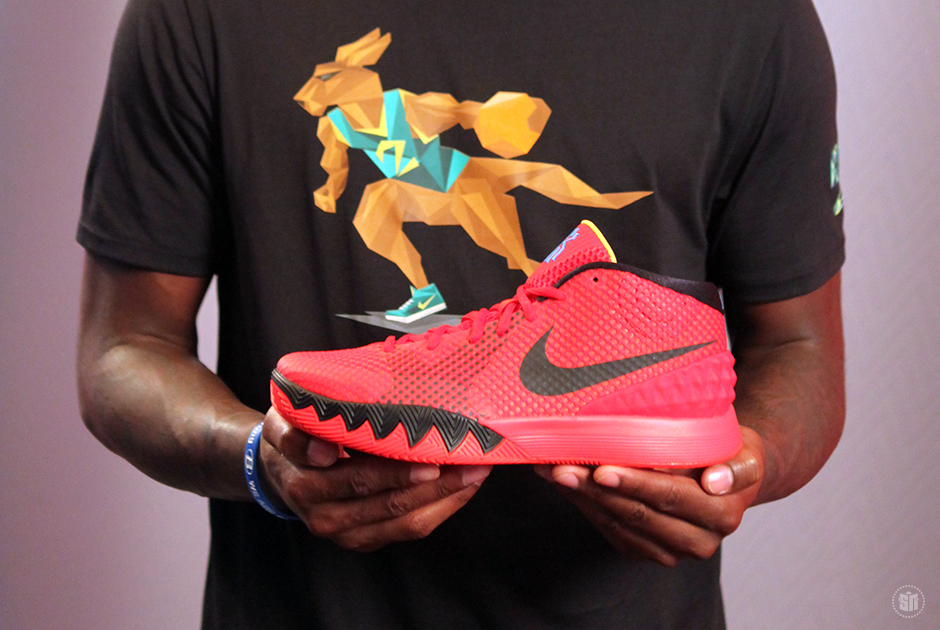 SN: Can you anticipate the emotions or excitement you might get if you walked down the street and saw your signature shoes being worn by young athletes?

KI: Very emotional. You put in the hard work and you see your dreams come true before your eyes. You grow up as a kid and you’re wearing everybody else shoe because you want to be like them, so it’s like, what if I had my own signature shoe, and what would I put into it? The Kyrie 1 speaks to all of that; everything i’ve ever thought of having in my own shoe has come to life, so it’s a dream come true like I said and I can’t say that enough!

SN: What were some of your favorite Nike Basketball shoes growing up?

KI: Just the shoes from my favorite point guards man. When CP3 came out with his, I was wearing those. I had the J-Kidds, had a buncha Kobes, LeBrons, and definitely when KD came out with his, because I feel like he represents that younger generation and kinda changing the game, and i just want to be on that same path. Those guys have definitely been a big inspiration on my shoe game.

Many thanks to Kyrie and Nike Basketball. 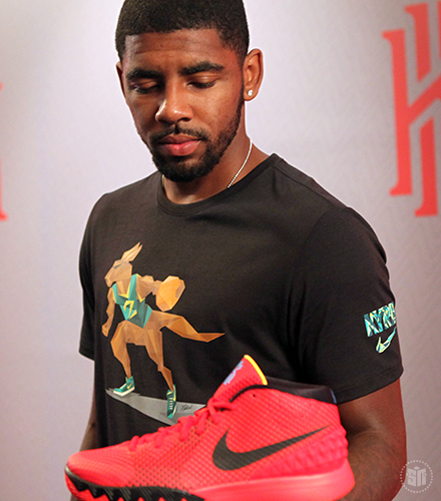 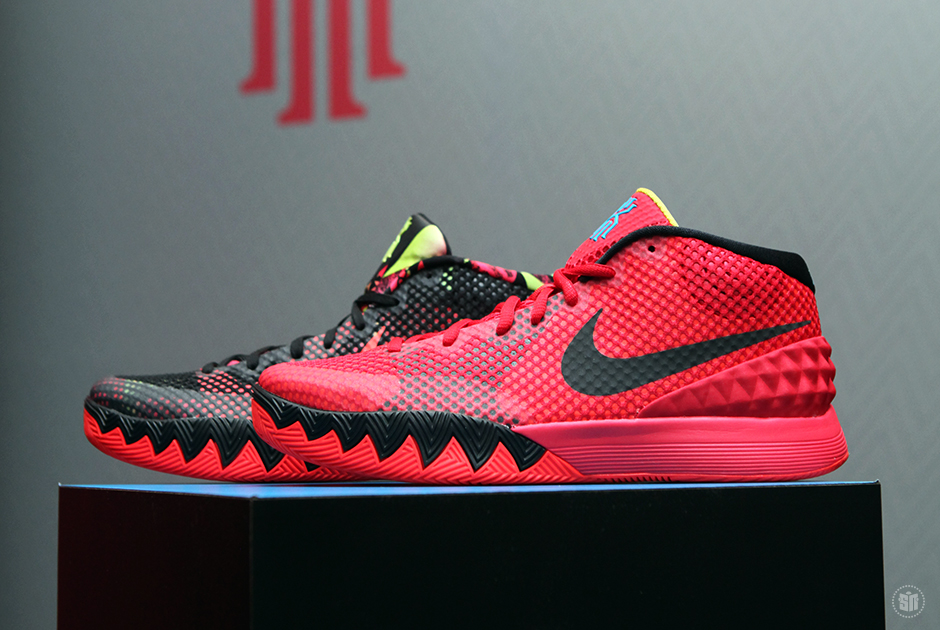 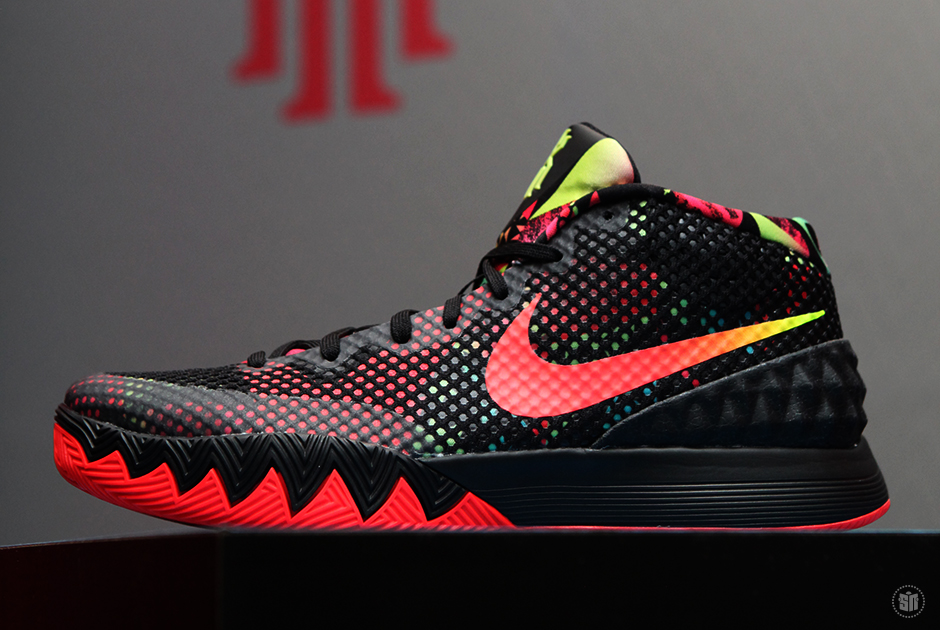 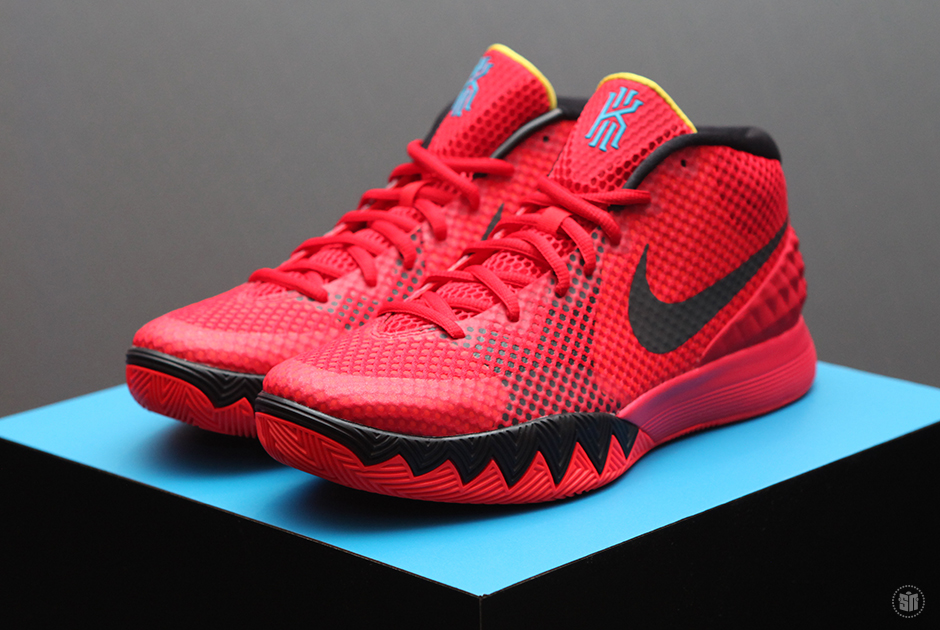