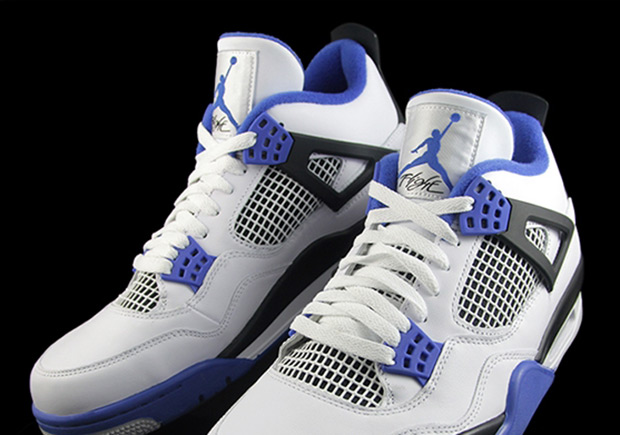 The Air Jordan 4 “Motorsports” Is Releasing This March

Jordan Brand’s 2016 was highlighted by a number of notable retro returns, a dedication to quality craftsmanship through their premium Pinnacle Series, and an ever-widening array of silhouettes featuring original ‘Nike Air’ branding. So what’s in store for the Jumpman’s 2017 catalog? While we already know a number of retro releases from January-March, perhaps one of the most anticipated drops will be this Air Jordan 4 Motorsports slated to release on March 26th in both adult and youth size runs.

The Air Jordan 4 Motorsports was originally released in 2006 as an homage to Michael Jordan Motorsports, a post-retirement competitive endeavor that saw Michael Jordan managing a motorcycle racing team. The original offering featured a Mars Blackmon logo on the heel panel for a nice added feature, but 2017’s retro skips out on that feature for a more general release vibe. Instead, we get a clean white leather base with Varsity Blue accents on the midsole, inner lining, and branding throughout. A stark contrast of black hits the heel with for a simple look that anybody can get behind. What do you think of the Jordan 4 Motorsports 2017 retro?

Check out more detailed shots of the upcoming Air Jordan 4 “Motorsports” retro below and head over to our Air Jordan Release Dates page for an updated look at all of the coming Jumpman attractions for 2017.