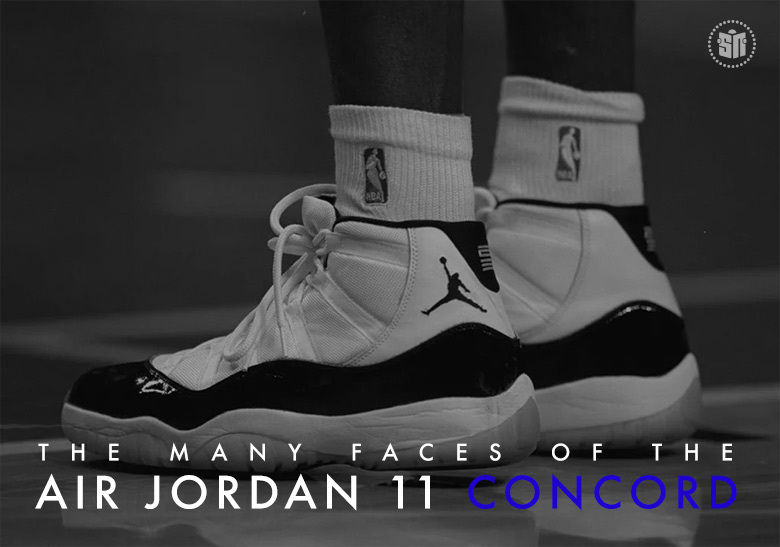 The Many Faces Of The Air Jordan 11 “Concord”

Among the pantheon of timeless sneaker classics is the Air Jordan 11 “Concord”, the stylish white and black patent leather colorway of Tinker Hatfield’s enduring design from 1995. By now you’re well aware that the shoes are releasing once again on December 8th, 2018 in full family sizes, poised to shatter the record set by 2016’s Space Jams as the single best-selling sneaker release in brand history. Throughout the years, the famed colorway has appeared in a variety of iterations. Different numbers on the heel, details that didn’t make the cut, special versions made just for Michael himself, and even some possible counterfeits that appeared in shoe closets of the rich and famous. Check out a quick rundown of some of the more notable issues from 1995 to present day, and gear up for the official release of the Concord Jordan 11 this Saturday. 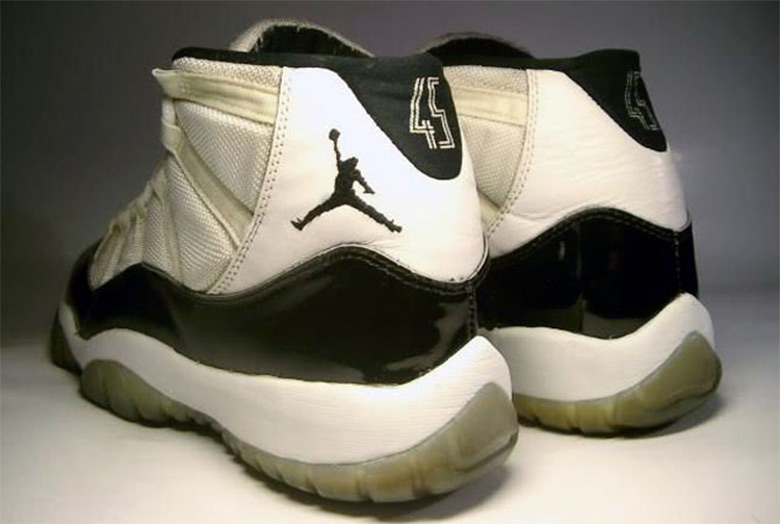 The first “45” Sample (May 1995)
Michael Jordan debuted the shoe during the 1995 Playoffs against the Orlando Magic. Tinker Hatfield advised MJ to not wear the shoes during the game as they were not quite ready for the market, but Michael was in love with it so much that he laced ’em up anyway. The legend of the “Concord” only lasted two games because the colorway didn’t abide by league regulations; after wearing the Air Flight One in Game 3, he debuted a black/royal version that would later be dubbed the “Space Jam” for its appearance in the 1996 movie of the same name. 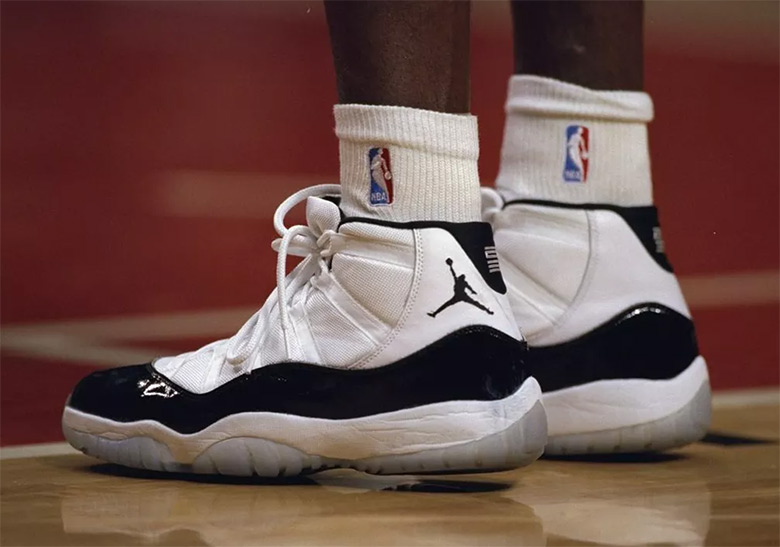 The retail version (November 1995)
The famed ’95-’96 season will go down in history for a number of reasons. One such factor is the Air Jordan 11, which Jordan wore throughout most of the season and throughout the Playoffs. Dubbed the “Concord” for its subtle purple accents on the sole, this shoe finally hit retail in November of 1995 for $125. The heel no longer featured the temporary “45” as Michael permanently reverted back to “23”. 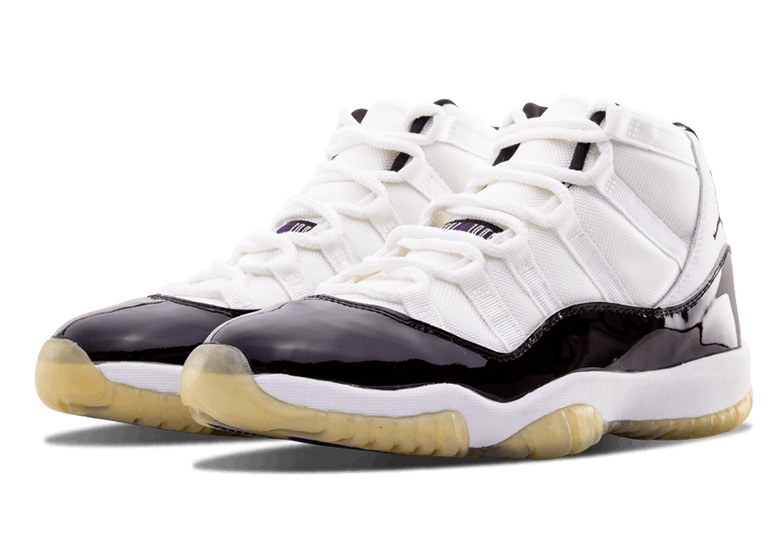 The first retro (October 2000)
With Michael fully retired from basketball (or so we thought), the Jordan Brand now focused on re-issuing past classics alongside its ongoing performance models. On October of 2000, this historic colorway returned to store shelves with the same $125 MSRP. 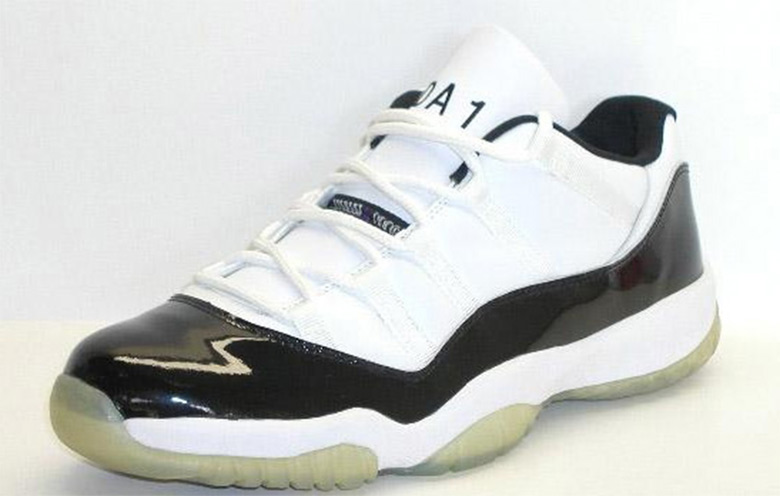 Player Exclusives for Team Jordan (2000-2001 NBA season)
Speaking of Jordan Brand, a roster of current athletes (particularly younger up-and-coming wings) were tapped to represent the Jumpman logo on the court. Derek Anderson and his finely chiseled goatee was one of the players who were blessed with Player Exclusives, and during the 2000-2001 season he rocked a low-top version of the sneaker. 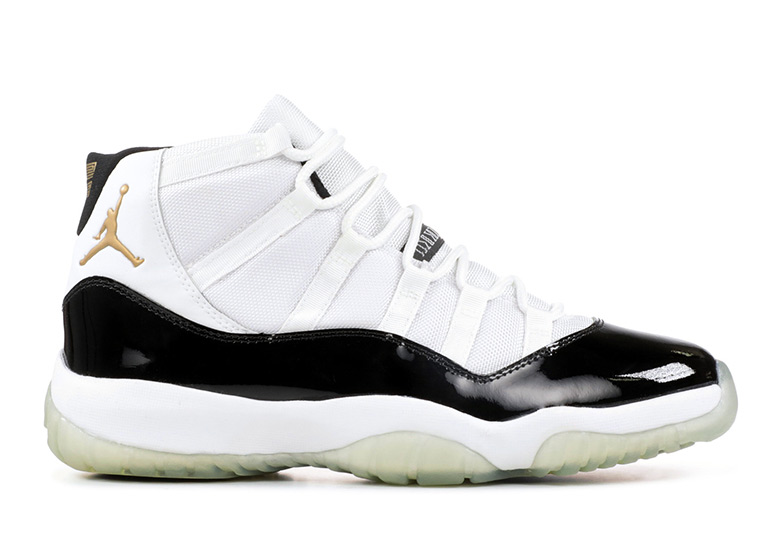 The Defining Moment (January 2006)
Throughout most of the 2010s, the scarcity of the Air Jordan 11 deemed it one of the most coveted sneakers on the planet. In January 2006, Jordan Brand launched its first-ever two-pair set called the “Defining Moments Package”, which honored MJ’s first championship since his first return from retirement with golden accents. It set the table for the storytelling era for Jordan Brand, which continues to this day. 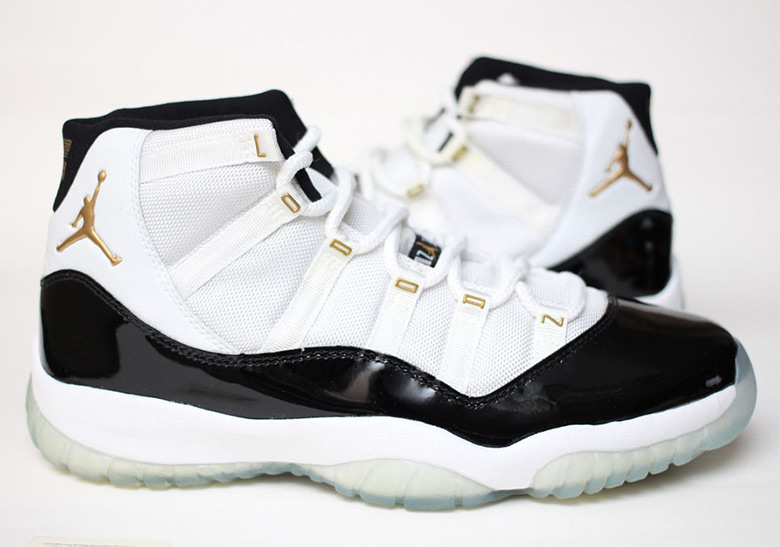 An alternate lettering sample (January 2006)
An alternate version of the aforementioned “DMP” 11s were created that featured the word “Jordan” spelled out on the lace loops. This was actually a nod to an earlier rendition that Tinker Hatfield himself had created when the shoe was first in development in the mid-1990s. Despite being an unreleased sample, some pairs were inadvertently sold at Nike outlets, and you might find some pairs on eBay or other re-selling platforms from time to time. 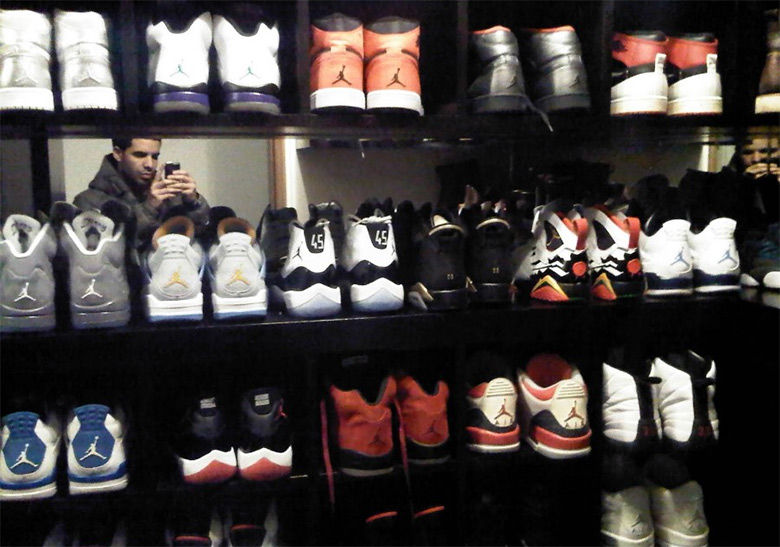 Shady plugs? (February 2011)
Long before DJ Khaled and Drake were signed to Jordan Brand, they were merely friends of the program. Both were spotted with an updated version of the “45” sample, but the authenticity of these shoes have been challenged and they were never really talked about since. 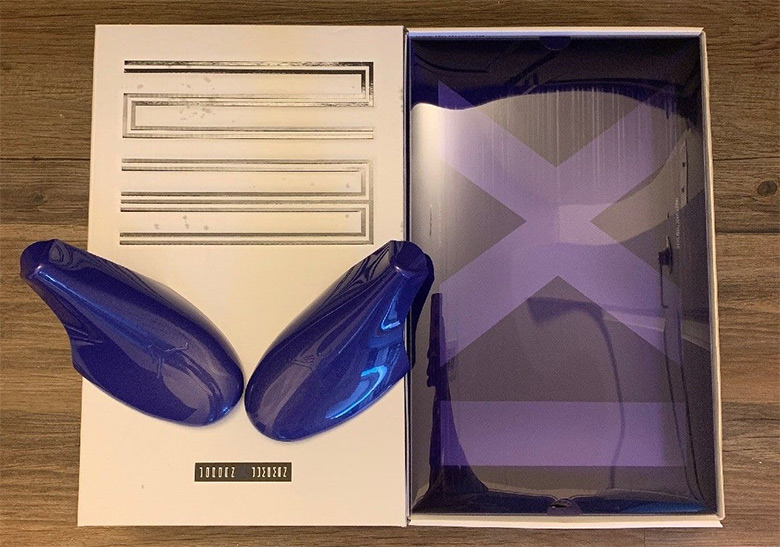 The second retro (December 2011)
Perhaps the most chaotic Air Jordan release in history, the December 2011 re-release caused campouts and mayhem on the global level. It was one of the releases that forced Nike to rethink their shoe release procedures that eventually evolved into raffles and things of that nature. Like the preceding Air Jordan 11 Retro releases, this issue came with an elegant white/black slide-out shoebox with a concord purple cover and solid shoe trees. 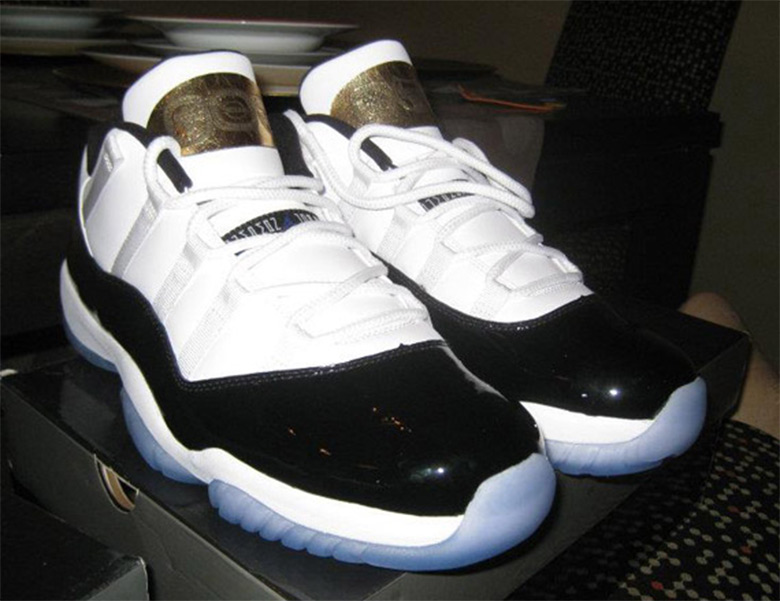 A championship tribute (December 2011)
Made exclusively for Michael Jordan and friends and family, the Concords appeared once again in low-top form and custom championship ring logos emblazoned on the tongue. These have rarely ever appeared in the public, making them one of the more mystical and obscure chapters of the Concord legacy. 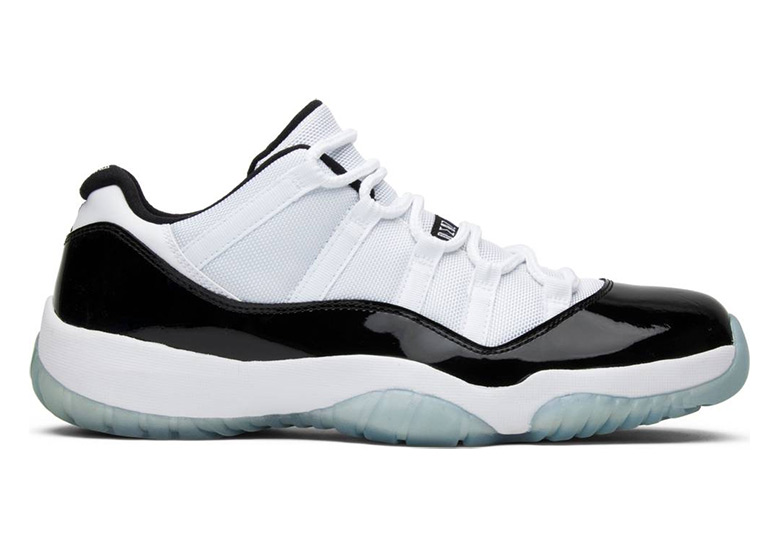 Getting low (May 2014)
Michael Jordan always showed an affinity for low-top sneakers. In May of 2014, Jordan Brand finally released its first-ever retail version of the Concords cut in a lower height. Definitely one of the most popular sneakers of that Summer. 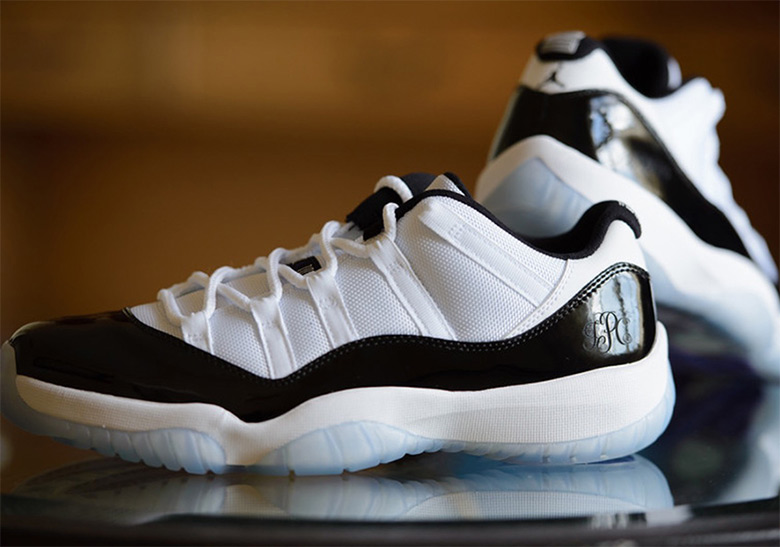 In the family (December 2014)
Michael Jordan was part of the wedding party for SoleFly owner Carlos Prieto, who just so happens to be the GOAT’s brother in law. For this occasion, the fellas rocked customized Concord Lows with etchings on heels. 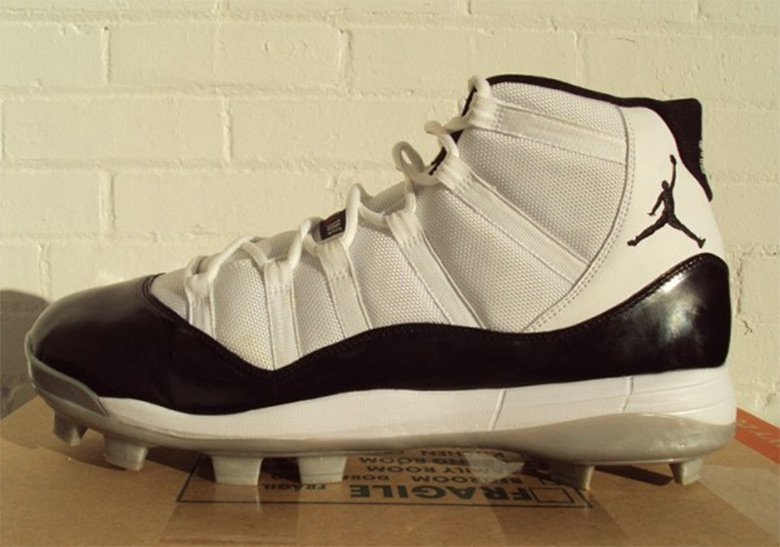 For other sports (Throughout the years)
Golf and baseball are two of Michael Jordan’s other competitive obsessions. For the diamond, Jumpman athletes such as C.C. Sabathia have worn field-ready versions of the shoes, while the retired golfers were blessed with pairs ready for the green. 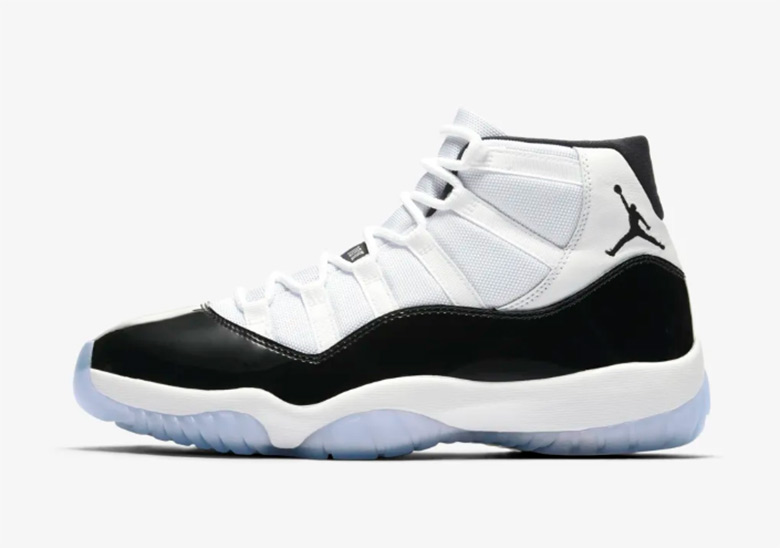 Full circle (December 2018)
On December 8th, 2018, Jordan Brand will finally release the first-ever “45” sample of the shoes in completely remastered form. The shoebox is also a nod to the original, which also came housed in a grey package with black box lid.