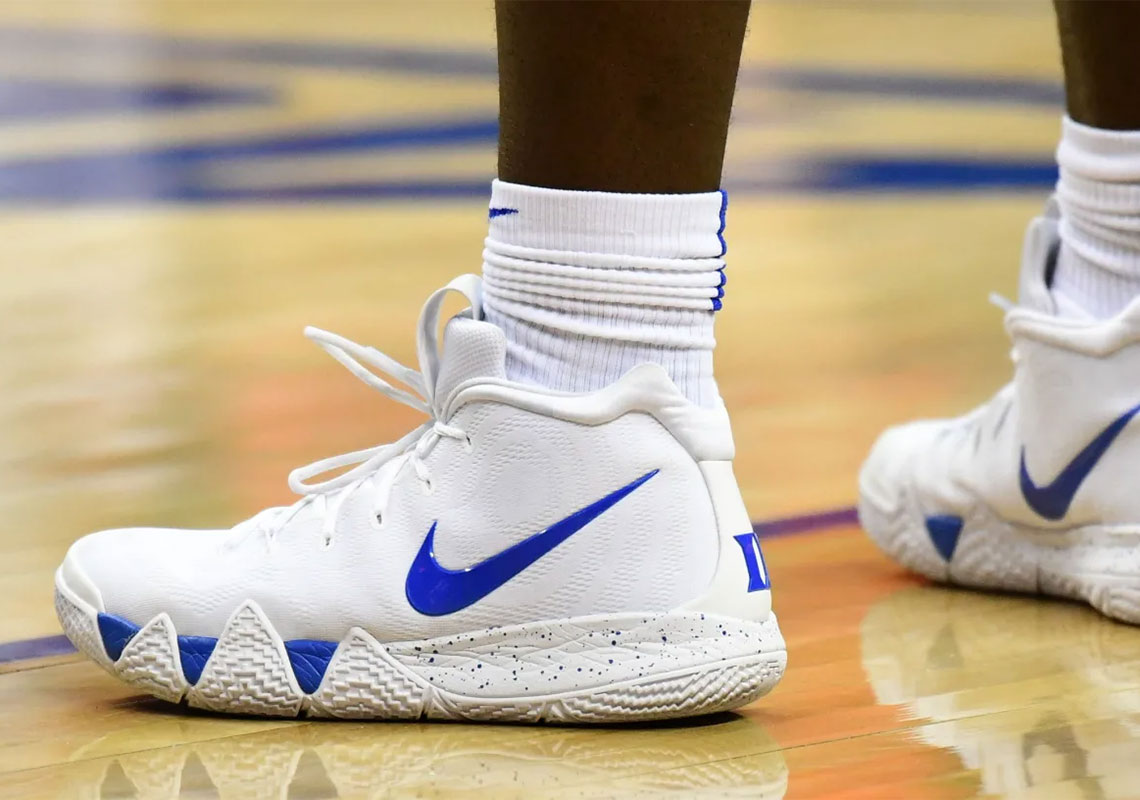 After injuring his knee when his Nike PG 2.5s exploded during a game in February, Duke Blue Devils standout Zion Williamson made a triumphant return to the court last night for his team’s game against the Syracuse Orange — and he did it in a pair of custom-built Nike Kyrie 4s. According to head coach Mike Krzyzewski, the Swoosh Brand’s top brass flew out to North Carolina the day after Zion’s shoes fell apart on national television, and then headed over to China to personally oversee the manufacturing of a more durable piece of footwear: one that would fit the powerful and athletic forward’s on-court needs. Interestingly enough, the Nike team opted to take it back a year and outfit Williamson in Kyrie Irving‘s fourth shoe instead of his current Kyrie 5. Their simple-yet-effective PE design uses a white base with blue Swooshes, heel Duke logos, and a split midsole that offers blue on the front and a speckled print on the back.

Williamson’s injury due to his shredded Nike shoes drew national attention — raising questions about everything from the NBA’s age minimum to the Beaverton Brand’s past quality control issues — and garnered needling responses from other footwear companies. Many pundits thought it would be wise for the uber-talented frosh/all-but-guaranteed #1 pick in this year’s NBA Draft to sit out during the ACC/NCAA tournaments for the sake of preserving his health. However, not only did Zion play, he showed just why he’s so highly regarded — scoring 29 points on 13-of-13 shooting and throwing down thunderous dunks, putting to rest any questions regarding lingering effects from the injury. Check out Zion’s custom footwear above, and stay tuned, as he’s likely got several more tourney heroics yet to come.