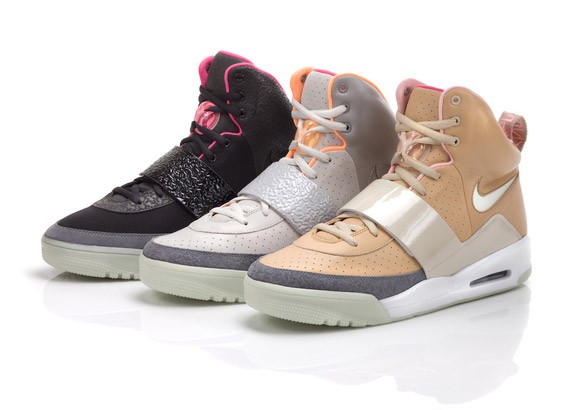 The Air Yeezy was developed from a strong relationship between West and Nike. Partnering with Nike Creative Director, Mark Smith, Kanye was taken through the product creation process, the same way athletes have with Nike Design for the past 37 years. This creative partnership of Smith and West’s talents as designers yielded a unique Nike Sportswear sneaker worth the wait. “Kanye is a truly creative talent,” said Smith. “He’s a natural designer-partnerships like this always enhance the creative experience and the end product.” West agrees that the partnership with Nike has been exciting. “Nike is such an important brand to me,” said West. “Whether you are on the court, in the street, in the club, at school, Nike represents excellence, the standard in design. Growing up, we looked forward to the release of new Nike’s the way we would an album by our favorite artist. So the opportunity to collaborate on a design with Mark Smith and Nike Design has been a dream come true, and a great experience.”

WHERE TO BUY:
The best place to buy a pair of Air Yeezy is probably on eBay but be careful of FAKES. Nike has only released three colors of the Air Yeezy to the public, see below for the three so if the colors don’t match up, don’t buy it. 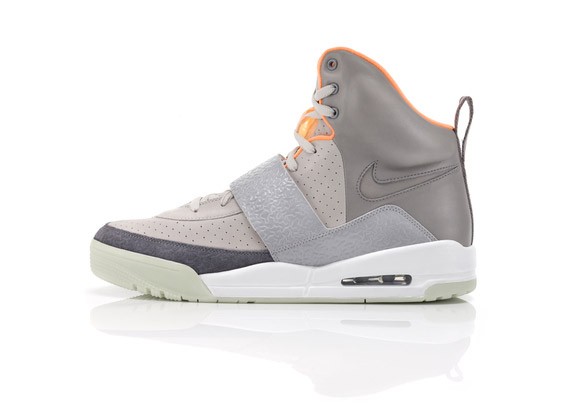 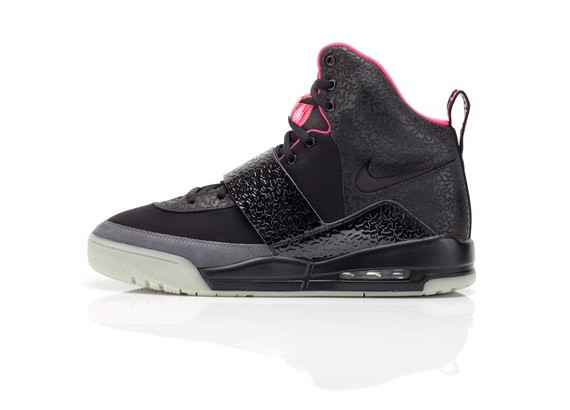 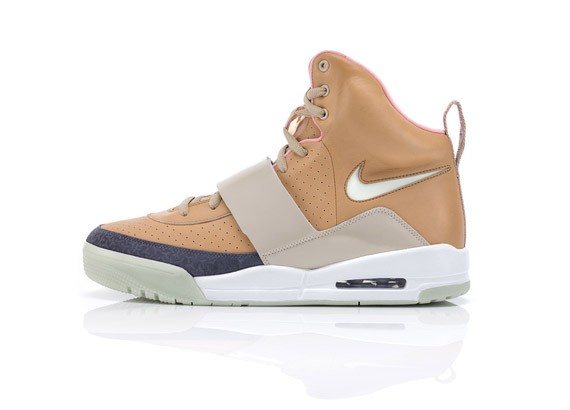 MORE INFO ON THE NIKE AIR YEEZY ON THE NEXT PAGE…

From the start, West and Nike’s shared vision was clear: to create a modern classic. An original Nike footwear style, that reflects elements of Nike’s sporting past, and remixes them with Nike innovation to deliver a unique shoe.

The creative process of the Air Yeezy began with the discussion around ideas and inspirations. The shoe began to take shape through a series of drawings and samples, each pulling inspiration and reference from some of Nike’s iconic innovations and rich design history, across both Basketball and Sportswear styles.

A careful balance was sought, each time new elements were added, with existing elements being taken away – a design process Smith refers to as “reductionism”. “Nike shoes need to function and always be innovative,” said Smith. “So the first thing we did was to make sure the design process that Kanye and Nike Design went through, mirrored that of our athletes.” “I’ve been designing Nike’s in my sketch pad since the fourth grade,” said West. “So to say I’ve been prepared for this would be an understatement. The really fun and challenging part for me was learning about Nike’s design process, learning more about fabrics and functions and colorways, and all of the details that go into designing a shoe of this quality.”

Following the fabled tradition of Nike’s design process, West and Smith went through a series of one-on-one design sessions. At Nike the ultimate test is one of performance, where the design meets the athlete’s movements. “Kanye could wear and perform in these shoes and really identify how we could make the shoes perform better.” Supplanting center court with center stage, West provided critical feedback on how the shoe performed throughout the course of his 2-3 hour performance sets, where the first prototypes of the Nike Air Yeezy were seen outside of Nike’s World Headquarters in Beaverton, OR.

THE NIKE AIR YEEZY: NEW SCHOOL OF COMFORT.
Born from Kanye West’s creative passion, built with Nike design and performance innovation, The Air Yeezy was fine-tuned on stages around the globe, challenging convention by remixing the past to create something uniquely new, as only Nike Sportswear can.

West is known for his non-stop energy both on the stage and off so the Air Yeezy had to support and sustain West from start to finish. An almost obsessive focus was put on delivering supreme comfort throughout the development of the shoe. Equipped with debossed ankle collar pods for added support and protection, extra-thick sock liners, a forefoot support strap, original functional tension lace loops, and Phylon tooling taken from the 1987 Nike Air Assault for added performance and comfort-all developed and integrated with one goal in mind: to keep Kanye on lock down in cushioned comfort during his performances during his many notoriously strenuous artistic live performances.

These performance attributes have been meticulously wrapped in premium full grain leather uppers and adorned with original design details that are uniquely Kanye and identifiably Nike. The remastered Nike Air Assault outsole is treated to glow-in-the-dark properties and will illuminate when the light is low. The forefoot support strap is premium grade patent leather and is of no-stitch construction. Clean seams are used throughout except for a premium suede toe wrap feature with visible stitch detail. Emblazoned across the Air Yeezy is an exclusive “Y” repeat pattern, as either a debossed or lasered detail, which takes inspiration from the Jordan brands iconic Elephant print material. This graphic treatment was developed by West and Smith to pay tribute not only to the name of the shoe and it’s co-creator, but also to the various moments in history that spurred West’s initial inspiration for the Nike Air Yeezy.

The Nike Air Yeezy will release in Spring 2009. Three colorways will be available. The first in April 2009 will be the Zen Grey/LT Charcoal color way, followed this will be followed in May by a Black/ Black version, and in June with the final Net/Net color way. 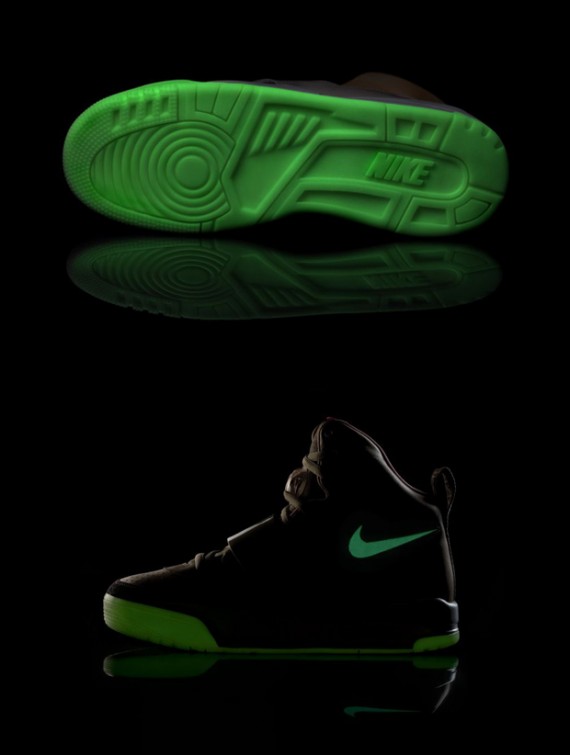 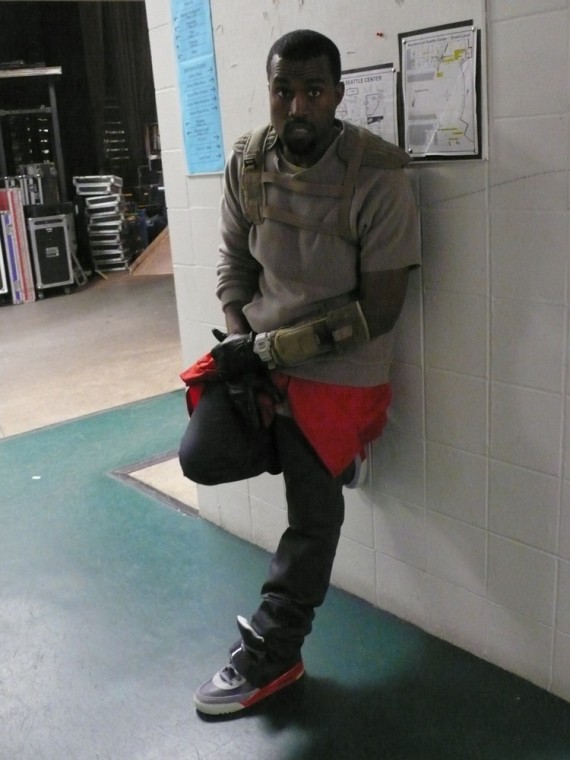 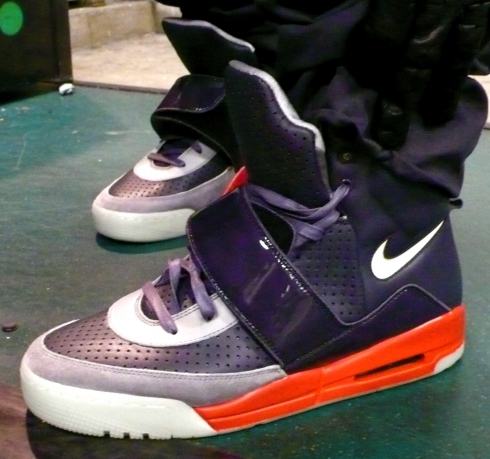 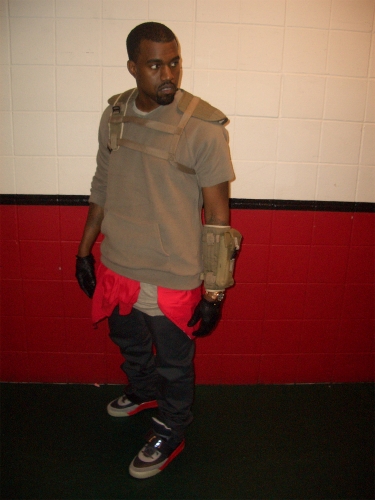 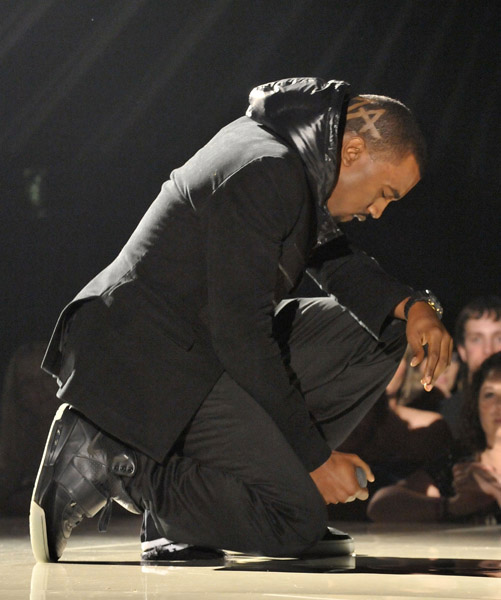 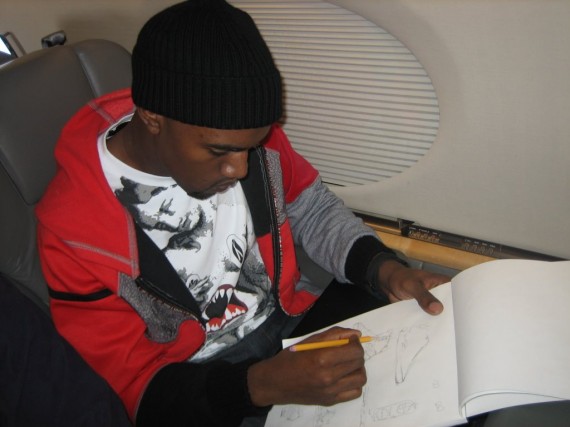