Since the Air Jordan III and the introduction of elephant print to the Air Jordan signature line, each and every Air Jordan model has been signified by one defining feature; For the Air Jordan IV, it was the use of a plastic-coated mesh upper panel that gave the AJ4 its calling card, as the special material was implemented into the design to add a lightweight yet stylish characteristic to the shoe. Other beautifying features are the triangular wing-flaps that acted as the lace eyelets, the all-new midsole construction that featured visible Air, and a new ‘Flight’ logo written in a flashy script font.

Aside from design features and trademarks, each Air Jordan model is recognized for one specific event in Michael Jordan’s storied career. For the Air Jordan IV, standing about all the great single-game performances, dunks, and scoring displays was ‘The Shot’, that came during the closing seconds of Game 5 of the First Round Playoff Series against the Cleveland Cavaliers. Considered to be the greatest game-winning shot in the history of basketball, Michael Jordan suspended himself in mid-air at the top of the key, disregarding the laws of inertia, and sank a buzzer-beating, series-closing jumper, celebrating with a vicious set of fist-pumps before being mobbed by his teammates, while head coach Doug Collins scampered around the court and the Cleveland crowd stared in silence and utter disbelief. Continue reading for the entire Michael Jordan Through The Years: Air Jordan IV feature and stay tuned to the next installment of this Sneaker News Michael Jordan feature. 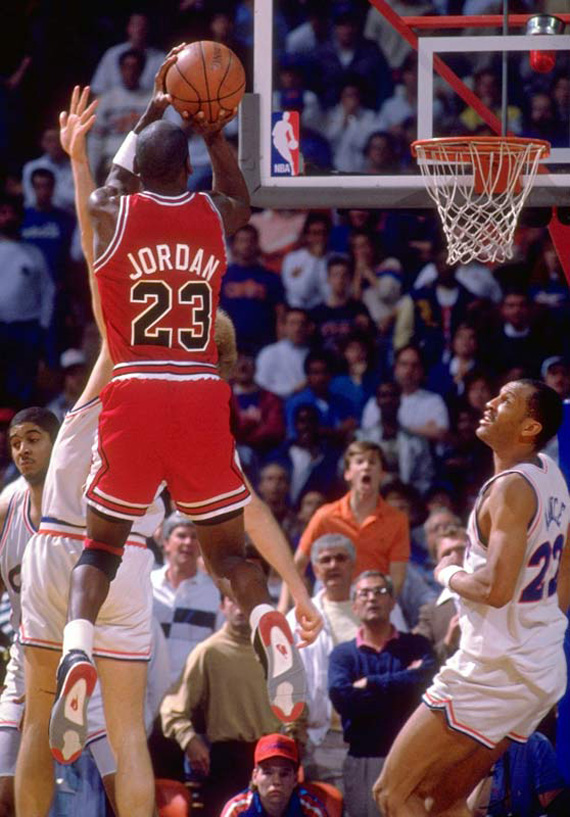