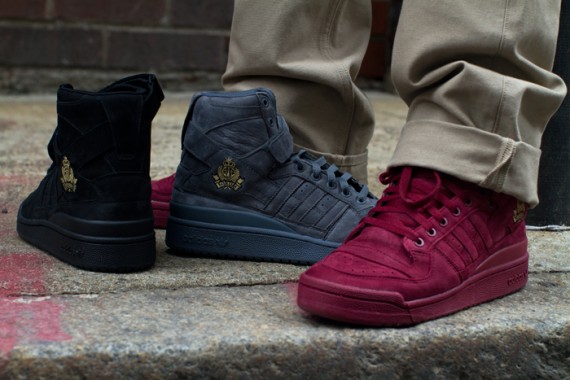 Cambridge, Mass’s Concepts is known as one of New England’s premier sneaker boutiques and they’ve been able to season a smorgasbord of collaborations with the kind of local flavor of which most other shops could only dream. From the various ‘Lobster’ Dunk Low SBs to this year’s superb New Balance 999 ‘Kennedy’, CNCPTS has a knack for conveying colloquialisms and coming up with something a bit more special than just your average guest star colorway. The same can now be said of one of CNCPTS’ alums, as Frank the Butcher has lent some of his childhood memories for the first collabo release from his newly opened Boylston Trading Company.

The BTC x adidas Originals Forum Hi ‘Hustler’s Crest’ was inspired by a young Frank Rivera seeing street hustlers rocking a special makeup of Forums roughly two decades ago in his hometown of Worcester. They stood out against the mass of Superstar shelltoes that dominated the Boston area around that time and stood out to Frank to the extent that over twenty years later, he was looking to recreate some of that fast life luxury with three monochromatic lux suede designs that add a unique gold and black embroidery to their lateral ankles. Check out shots of all three pairs after the jump and stick with Sneaker News for the release date.