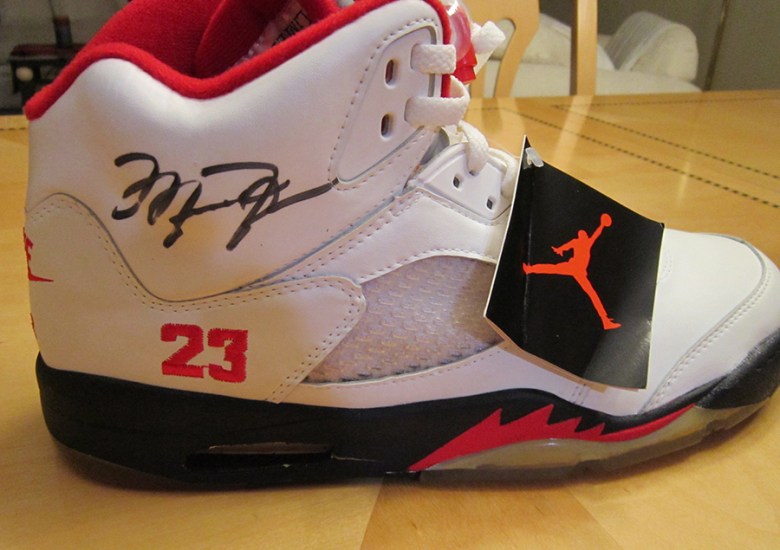 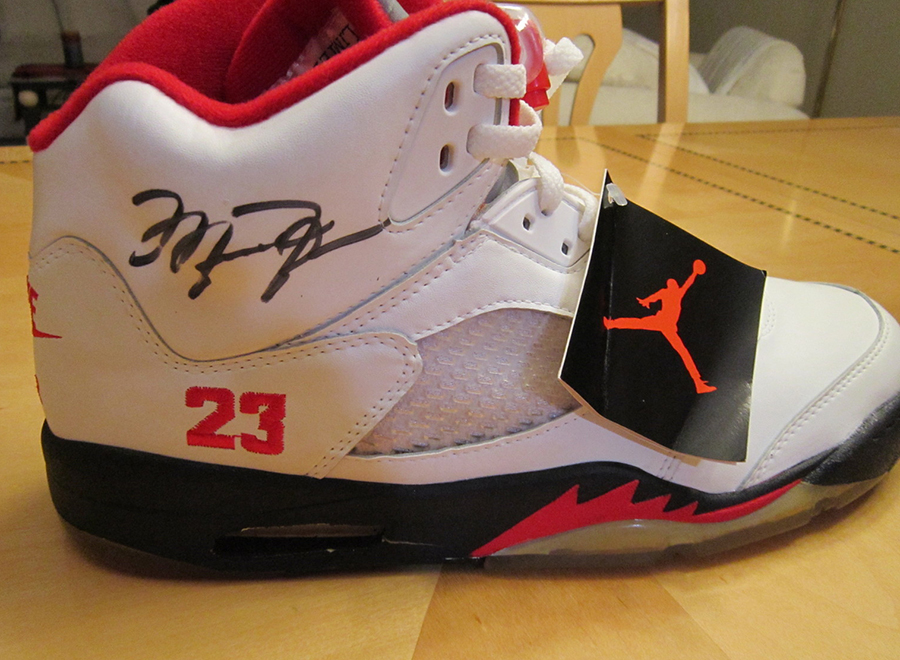 Player exclusive sneakers are nothing new. We’re certainly in a new age with respect to the extents that people are willing to go to get their hands on those player-only pairs, but long before people were poring over images from NBA games online, they were glued to their TV screen trying to figure out what was special about that pair that Mike wore. Or how Harold Miner could have his own version of another man’s signature shoe. Or where those Air Jordan 6s that Ray Allen had at the Olympics came from. This latest episode in our ongoing series chronicling the Sneakers That Ignited The Sample & PE Craze deals with those sort of shoes.

Specifically, we’re zooming in on the Air Jordan 5, a sneaker that had PE editions floating around ever since it first made its way onto the feet of Mike back in 1990. More recently we’ve seen player exclusives teeter on the edge of retail releases – we’re sure you can recall when folks across the internet were anticipating pairs like the Carmelo Anthony and the CP3 making it to retail. When they didn’t, it only seemed to increase the level of thirst for these impossibly rare editions. Continue reading to see a gallery of hard hitting Air Jordan 5 pairs made exclusively for Jordan Brand athletes in the NBA and stay tuned to Sneaker News for the next installment of The Sample and PE Craze.

We’ve got to start things off by paying homage to MJ himself. This jaw-dropping player exclusive version of the Air Jordan 5 from 1990 featured the jumbo 23 stitching on the side. They were actually a bit more widely produced than others too – there’s a designation under the tongue that references 100 pairs in total being made. 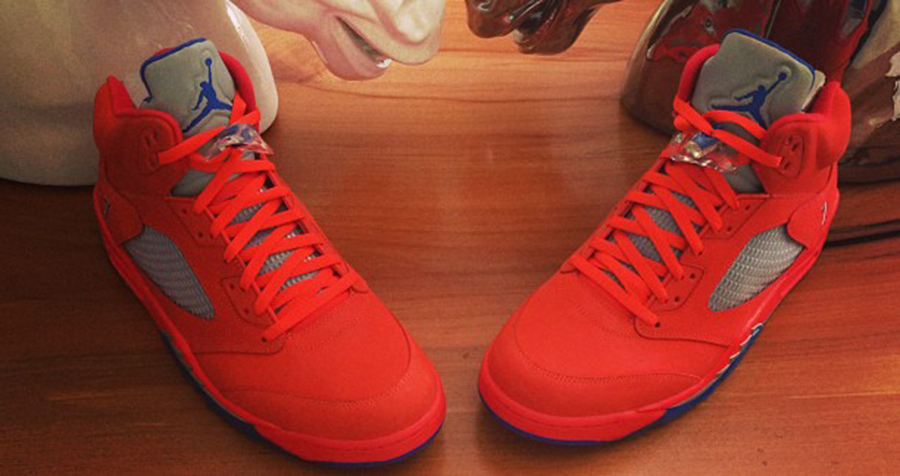 Remember the rumors of these coming to retail? This brilliant orange pair of Jordan 5s was made exclusively for Melo, although they eventually made their way into the hands of some select sample collectors. The first look at this shoe made the 2013 Air Jordan V Retros even more popular than they already were. 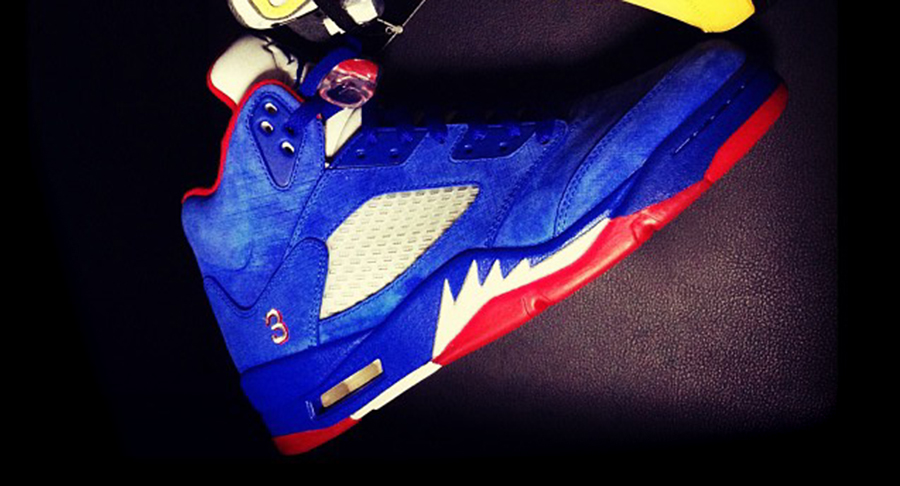 Another pair of PE looking Jordan 5s that was at one point touted as a retail release. They never materialized though, so once again onlookers had to lust after the red/white/blue Clippers flavor from afar.

Jesus Shuttlesworth has been doing this for a long time, and his Jordan retro exclusives extend all the way back to the early days of Jordan Brand. This duo came from his four year stint with the Seattle Sonics and featured a couple of yellow tinted looks to match up with that now-extinct team. For hardcore collectors, the Ray Allen V is definitely high on the list of sneakers to track down.

No, the Clippers pair wasn’t Chris Paul’s first exclusive Air Jordan 5. A younger CP3 had access to these New Orleans ones that again featured his #3 stitched on the back side, and were indeed made in a Home and Away duo.

Air France x Air Jordan. Mickael Pietrus has become a bit of a traveling man in recent seasons, but for a while there during the last decade he stuck it out with the Golden State Warriors down in California. It was there that he earned these Air Jordan 5s in both home and away colors.

You can file these ones into the “could pass as OGs” folder. Joe Johnson, a man who is still getting plenty of Jordan Brand love out in Brooklyn, was blessed with these two while in Atlanta. The Air Jordan Vs here had a fiery mix of red and orange that doesn’t look too far off from some of the original schemes for this Tinker design.

The Phoenix Suns colorway was all over the place last year, and so was the Air Jordan 5. And yet, the two never met in the form of a retail release. Shawn Marion’s not worried though – he’s got these in the stash somewhere.

Eddie Jones’ time with the Grizzlies wasn’t long, but it was long enough for him to grab these two Air Jordan 5 pairs. They stuck with the reflective tongue and stuck some Memphis flavor into the the accents around the shoe.

The master of the Air Jordan Low PE, Mike Bibby, of course had access to the Air Jordan 5. During his Sacramento Kings era he brought out these two pairs that wore his #5 and seem to have skipped out on the “Team Dime” treatment.

There is a long tradition of special Air Jordans showing up for Olympic events (We see you Ray Allen). Maybe a decade down the line Jordan Brand will decide to bring these back out as the Air Jordan 5 “Olympic” – until then you’ve got no choice but to sit and stare.

Before Melo headed out to the Big Apple, Jared Jeffries beat him to the punch as far as Jordan 5 exclusives with this quick set of white and black based looks, which let the requisite blue and orange play the accents. 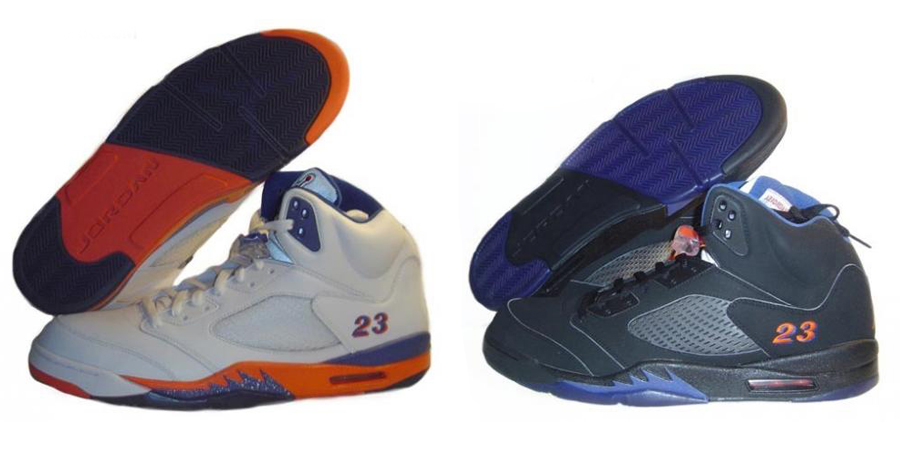 Q-Rich ended up with some away looking 5s that looked suspiciously similar to the Jared Jeffries pair we just showed you. With that being said, his Home concoction managed to stand out thanks to the rearranging of the iconic Knickerbocker colors.

The Trail Blazers look has a large overlap with the Chicago Bulls one, and often times the Air Jordan PEs passed to that team have an OG vibe to them as a result. The Derek Anderson duo shown here is no different – although there weren’t any Air Jordan 5 Lows for the original run.

These two pairs make it in on a technicality. As you can see, the two pairs made for the man took the standard “Metallic” and “Fire Red” versions of the shoe and slapped some #20 embroidery on the back side.