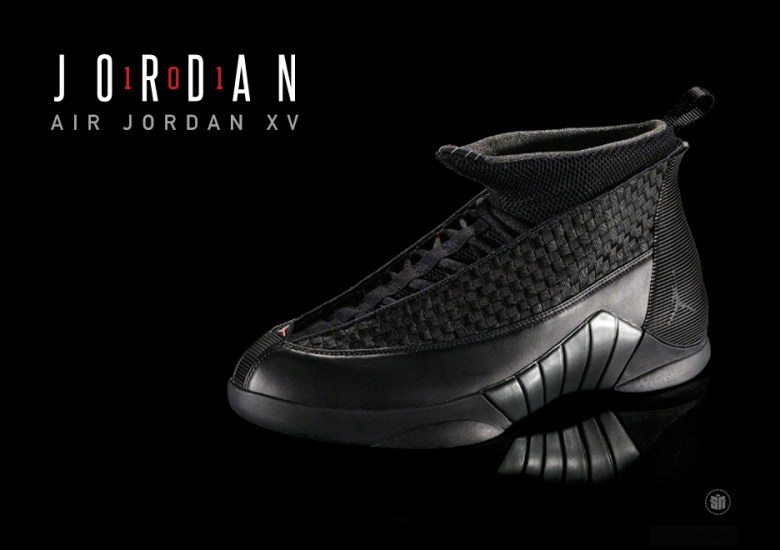 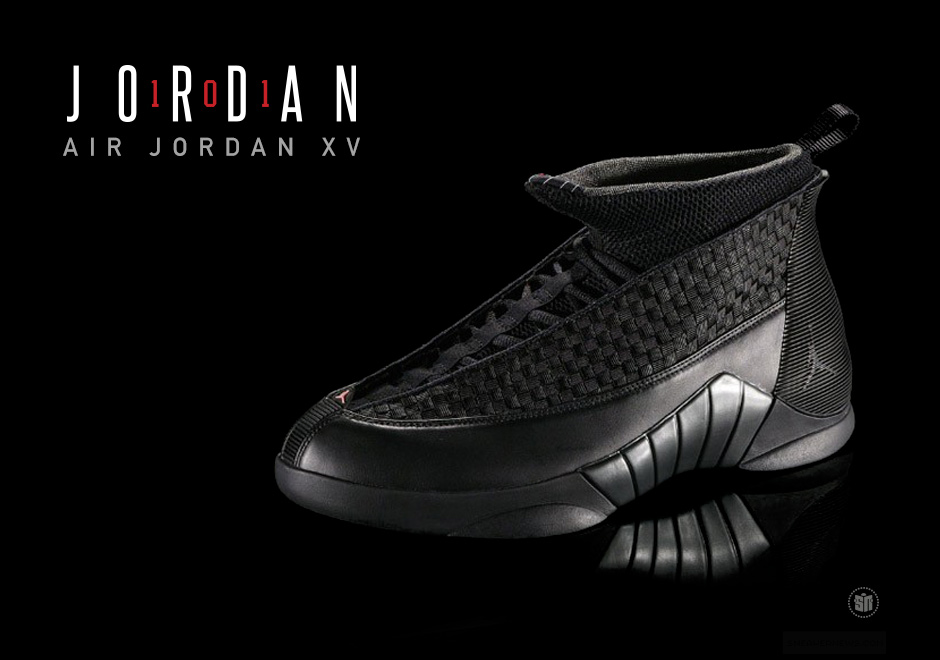 The Last Shot was taken, and Michael Jordan was again retired from the game of basketball in 1999—seemingly for good. But with the founding of Jordan Brand a couple years earlier, this time there was no doubt—like that of Jordan’s first retirement—that the Air Jordan line would live on. But would the Air Jordan truly be a success without MJ on the court? Could Air Jordans still take flight without the man that made them fly? For a brief time, it seemed like the answer may be no.

With many of the most successful and beloved Air Jordan models, all the stars seemed to line up perfectly in their time in history thanks to each’s heralded design, legendary on-court moments on MJ’s feet, and cultural significance. Unfortunately, that story seems to almost work in complete opposite fashion for the Air Jordan XV, which there’s no way to deny is arguably the biggest flop of the entire Air Jordan line. This week’s edition of Jordan 101 will unavoidably have to paint a different picture of the featured shoe, one that many Air Jordan fans regard as their least favorite model. But don’t worry, it’s not all bad. Let’s take a look at all the details—positive and negative—of the Air Jordan XV. 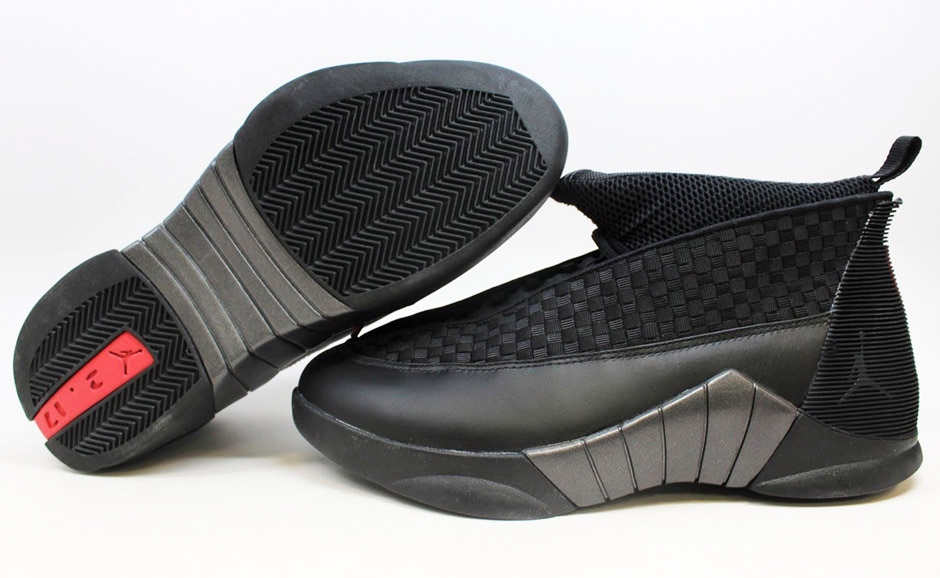 The Air Jordan XV debuted in late 1999 in the ‘Black/Varsity Red’ colorway that was followed in 2000 by five more colorways of ‘Obsidian/White/Metallic Silver’, ‘Flint Grey/White’, ‘White/Midnight Navy’, ‘White/Dark Pine’, and ‘White/Columbia Blue’ all priced at $150. There was also a low-top version in three colorways. Even despite the model’s low popularity, the XV was retroed in 2007 in two colorways and once again in the Countdown Pack collection in 2008. There was also an Air Jordan XV SE that released in 2007, which featured a modified design and came most notably in colorways for Georgetown and North Carolina. 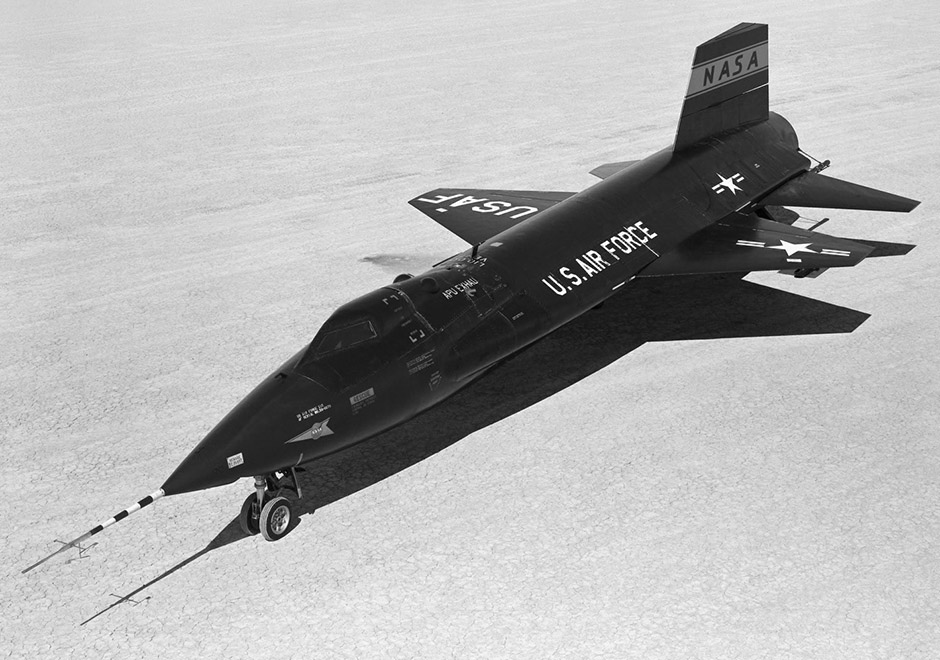 Designed by Tinker Hatfield, the Air Jordan XV took inspiration from the rocket-powered X-15 hypersonic jet plane. The fastest jet ever created that could surpass speeds of 4,000 miles per hour and also reach altitudes bordering outer space, the X-15’s sleek and speedy design is recreated in the the silhouette of the XV, translated best in the all-black colorway. The Air Jordan XV was the first Jordan shoe to feature a woven upper, with Kevlar mesh material across the upper half of the shoe. The design of the XV is also hypothesized to be influenced by Prada footwear because of the red stripe (on the black colorway) running down the back of the shoe. There’s no official confirmation on the Prada inspiration, but Michael Jordan’s fondness for designer footwear makes it very possible. The last characteristic worth noting (and the part of the shoe many dislike the most) is the tongue that juts out towards the toe of the shoe, seemingly mimicking Michael’s signature tongue-out habit while playing. 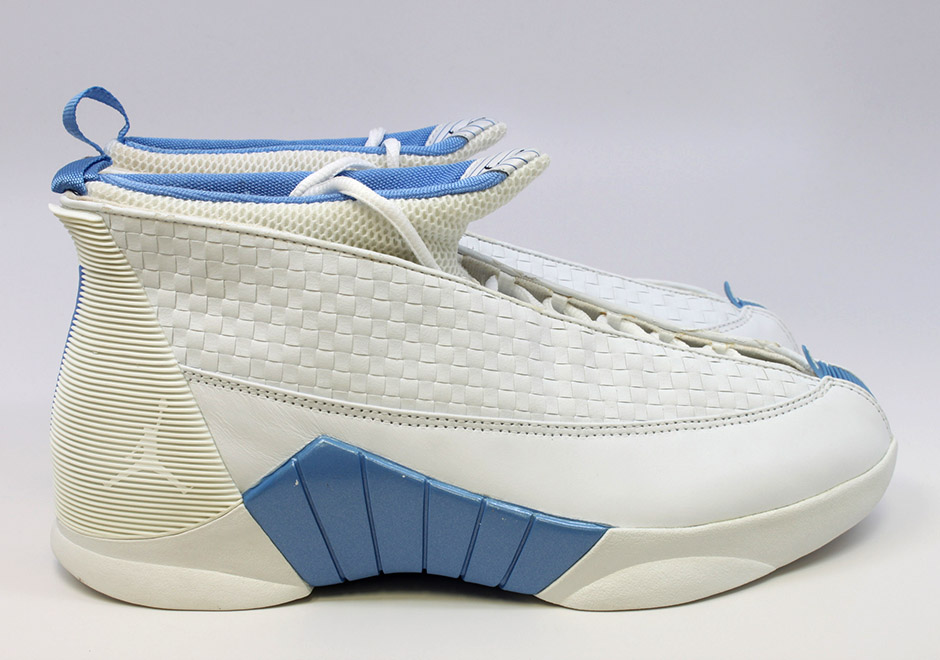 Like we touched on in the introduction, there’s really no way to talk about the XV with ignoring the fact that it’s one of the most disliked models of the entire Air Jordan line. Apparently the greatest sneaker designer ever can even have a flop here and there, as evidenced by the aesthetically unpleasing design (to most) that also wasn’t known for being a great performer on the court—many critics felt they fit awkwardly and had almost no ventilation. A great idea on paper with the X-15 inspiration, perhaps Tinker just went a little too radical this time with the Air Jordan XV’s unorthodox design. Michael Jordan no longer being in the league to wear them on court certainly didn’t do any favors for their appeal, either. All this being said, it is an Air Jordan, so there are still those out there that love the XV and its place in the history of the line. 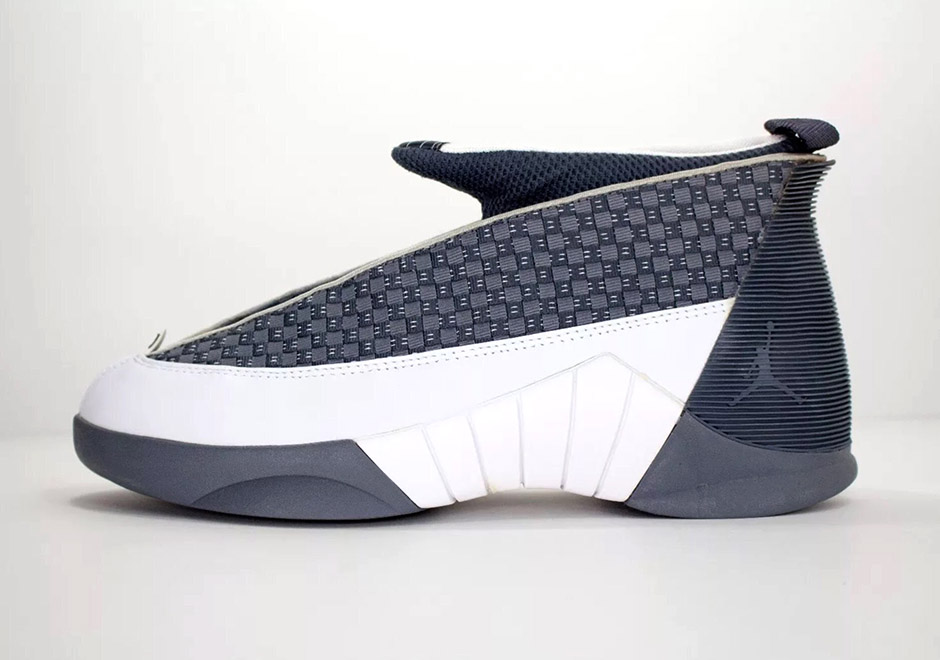 On the tech side of things, the most notable innovation on the Air Jordan XV is the woven kevlar mesh upper wrapping the top of the shoe. Woven material is a fairly common sight on sneakers today, but back in 2000 it was a pretty interesting new way to construct a shoe. The upper also consisted of a dynamic fit inner sleeve/bootie and a quick-lace system, while Zoom Air cushioned both the heel and forefoot and an external heel counter locked you in.

No MJ, But Represented on the NBA Court

Michael Jordan was gone, but the Air Jordan XV still got some on-court time in the NBA with the newly formed Team Jordan members Ray Allen, Mike Bibby, and Michael Finley wearing them, along with friend to the program Reggie Miller also lacing up PE pairs. But there was no replacement for MJ, and the sales of the XV struggled regardless. 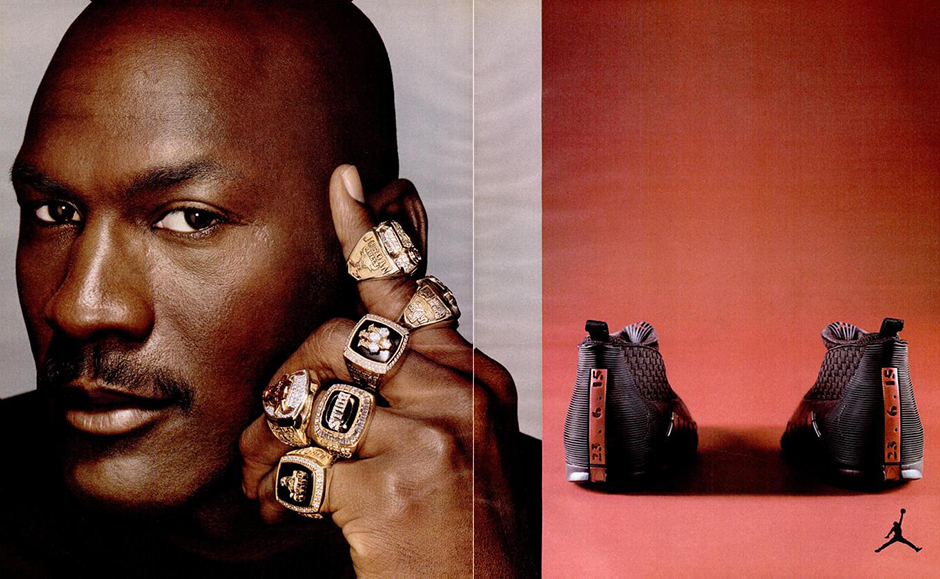 One of the bright spots for the Air Jordan XV was this awesome print ad with the now-iconic image of Jordan stunting all six of his championship rings. Count ‘em! 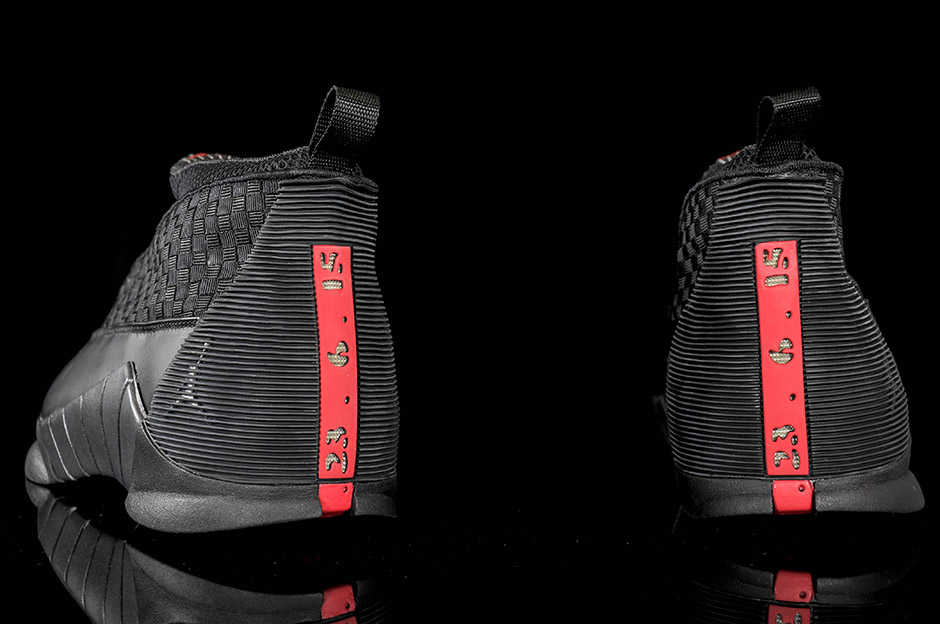 A Misfire, But More Legendary Sneakers to Come

The Air Jordan XV may have not been a huge success, and Michael may have been gone from basketball, but as we now know, neither the shoe line or MJ himself were down for the count. The Air Jordan series would rebound quickly with the XVI and XVII receiving high praise, while Jordan would give it another go in the NBA two years later with the Wizards. MJ’s basketball career only lasted another two seasons, but Air Jordans are still at the top of the basketball shoe game with impressive new innovations almost every year and millions of dollars of sales. While the Air Jordan XV may be the red-headed stepchild of the Air Jordan line, they’re still another significant chapter in the greatest basketball shoe series of all time.