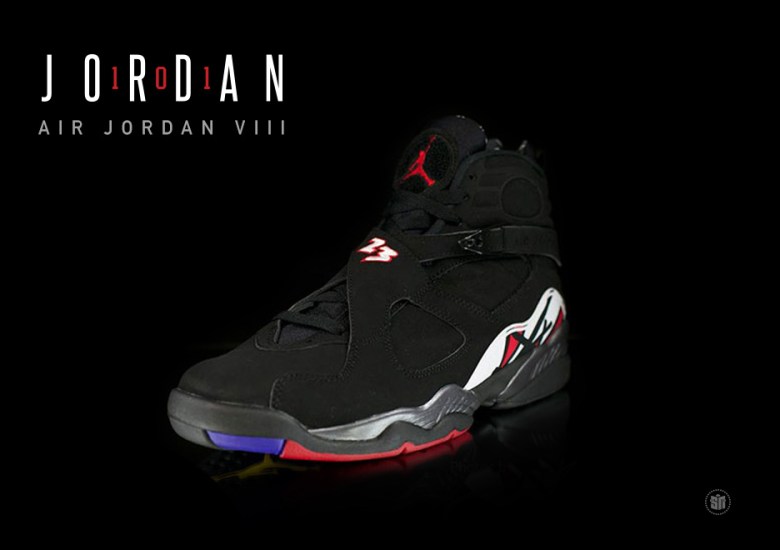 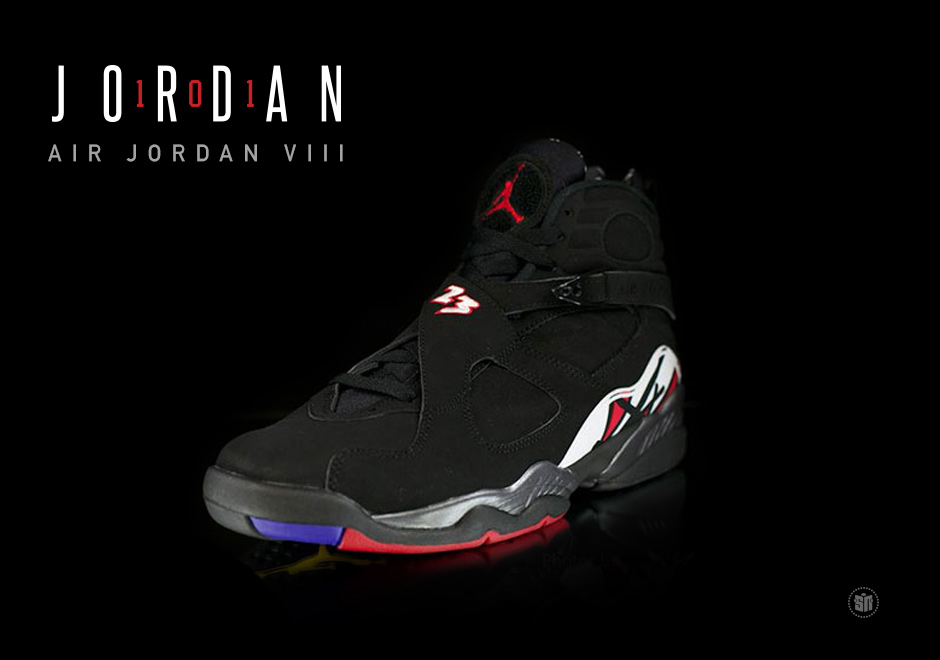 In 1993 Nike released the Air Jordan VIII, culminating the end of the first epoch of Michael Jordan’s career and sneaker line. The post-Three-Peat, pre-first-retirement, pre-baseball era, that is. Featuring a bold, strapped-up design with unique graphic detailing, the Air Jordan VIII would prove to be a distinctly ‘90s sneaker, now synonymous with the era it was born. It’s crazy to think of now, but if Michael hadn’t come back to basketball and Nike hadn’t decided to continue the line without him on court anyway, the VIII would have been the last Air Jordan. What would the sneaker world be like today if there were no more Air Jordans after 1993? It’s a frightening thought. In this edition of Jordan 101, we’ll take a look back at the history of the eighth—and fortunately not final—Michael Jordan signature shoe. 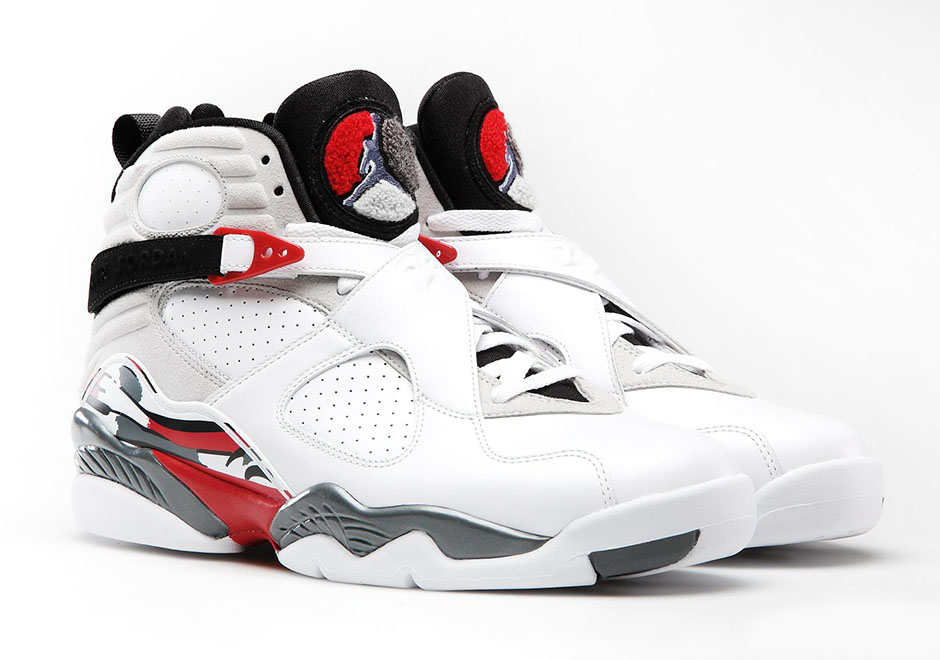 The Air Jordan VIII released in 1993 at a retail price of $125. There were only three original colorways: white and black Bulls color schemes and the beloved “Aqua” version. Michael wore the white-based VIII (sometimes referred to as “Bugs Bunny”) throughout the regular season, then switched to the black “Playoffs” version for the post-season on the way to completing the Bulls’ first Three-Peat. He would only wear the Aquas on-court once, for the 1993 NBA All-Star Game. A low-top version of the VIII was released in 2003 with the model’s first round of retros, but hasn’t been seen again except for the obscure brown and pink women’s colorway in 2007. Retroed relatively less frequently than other Air Jordans, the VIII still remains popular thanks to its unforgettable design and Michael’s on-court moments while wearing it. 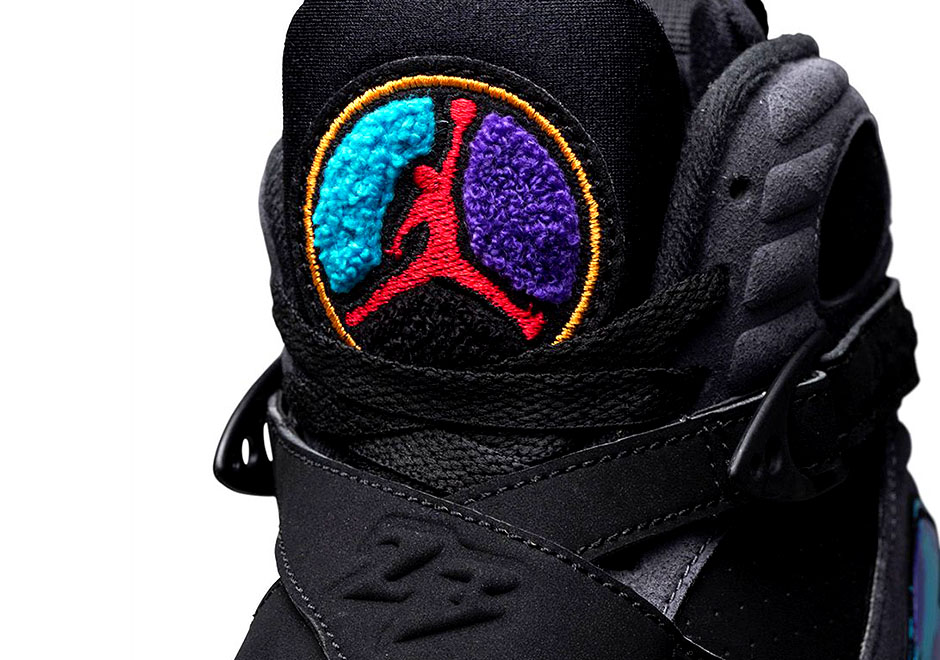 With models like the Air Raid, Air Unlimited, and Air Max CB from hoops and the Air Carnivore from training releasing around the same time as the Air Jordan VIII, it’s clear to see Tinker Hatfield and the Nike design team were a bit strap-happy in the early ‘90s. The lock-down support would be only one of the bold design features of the VIII, as it also caught eyes with the graphic-covered TPU paneling at the heels and large chenille Jumpman logo on each tongue. In one of the rare instances for Tinker’s Air Jordan designs, the VIII seems to focus a little more on aesthetics than performance, whereas most of his models are thought to have an impeccable balance of looks and function. While the somewhat gaudy design looks awesome, its downside is a heavier and less breathable shoe. 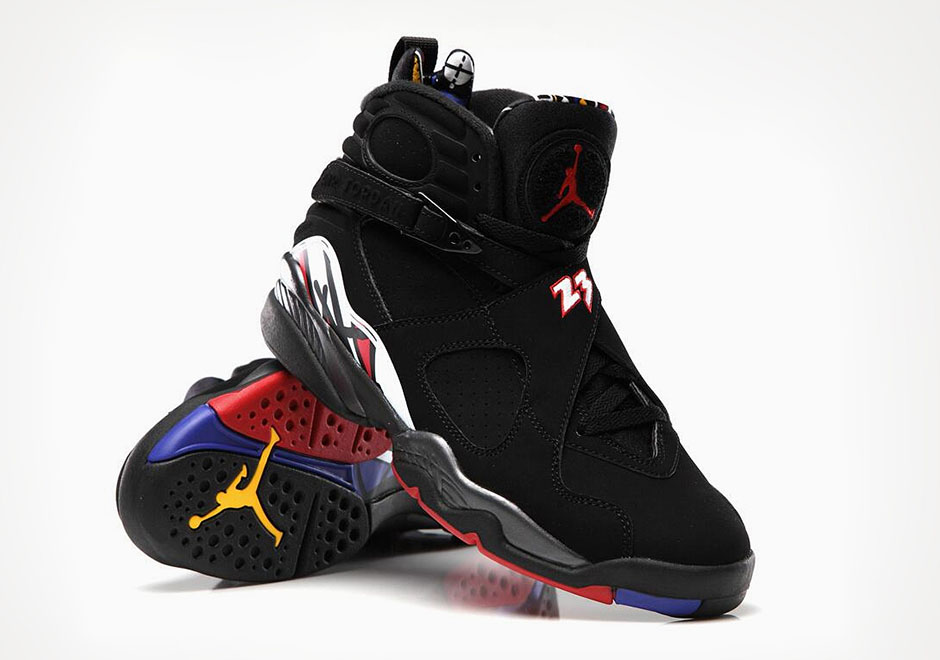 From a technological standpoint, the Air Jordan VIII’s notable introduction to the Air Jordan line was the duo of straps crossing over the upper for adjustable support. The upper also featured a Huarache-like inner bootie system with ample padding for a snug and protective fit. Down below, the shoe was cushioned with Nike Air in both the heel and forefoot.

Like all of the most legendary Air Jordans, the VIII’s great design came with its share of important on-court achievements from the man who wore them. Although there would be no iconic last shots, shrugs, or double-nickels during the 1992-93 NBA season in which Jordan wore the VIII, he got the job done more than effectively by earning the regular season scoring and steals titles and spots on the first teams of the All-NBA and All-Defensive squads. In the playoffs, Michael would lead the Bulls to the completion of their first three-peat, picking up Finals MVP honors to nicely bookend the first era of his career.

Taking over for Mars Blackmon as Michael’s sidekick for the Air Jordan VII ad campaign, Bugs Bunny was back again for more adventures to promote the VIII. This time Bugs and Michael ended up in outer space, where they successfully retrieved a stockpile of Air Jordans from Marvin the Martian for their most memorable commercial of the Looney Tunes x Nike partnership. The campaign was reprised in 2015, with Bugs around again for the bringback of the Air Jordan 7 “Hare”. Marvin was also back for a spot with Blake Griffin, and even received his own colorway of the Air Jordan 7 (despite only appearing in Air Jordan 8 commercials). 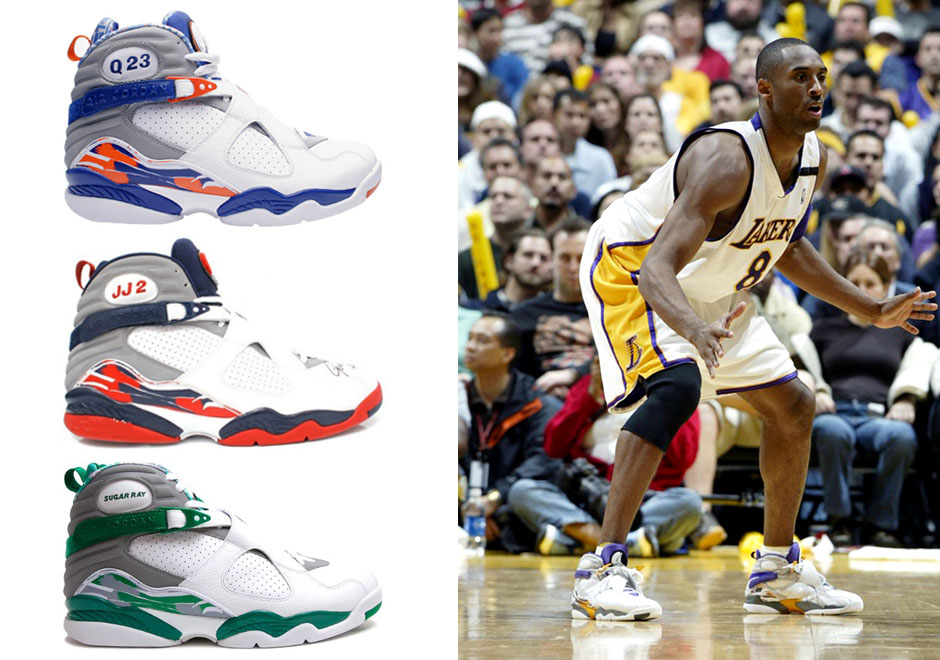 For whatever reason, the Air Jordan 8 has appeared in player exclusive versions more than almost any other Air Jordan model throughout the years. The list of players treated to their own colorways of the shoe run from superstar to the obscure, including but not limited to Ray Allen, Rip Hamilton, Chris Paul, Mike Finley, Joe Johnson, Eddie Jones, Quentin Richardson, Juwan Howard, Jared Jeffries, and Bobby Simmons. Kobe Bryant also got Lakers-colored Jordan 8s during his “sneaker free agency” in 2003. 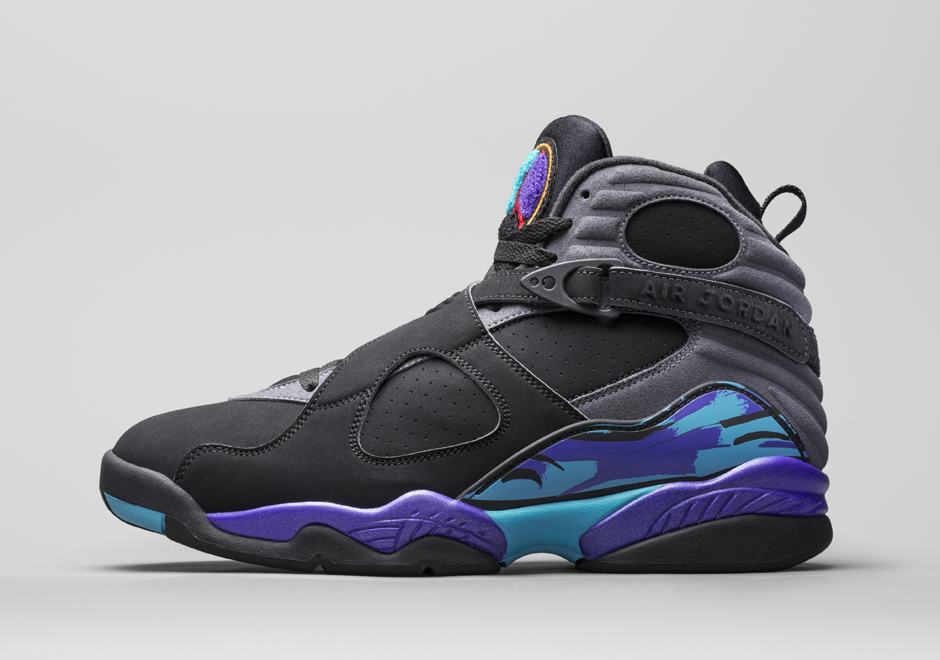 It may not be the most iconic, best performing, or even most popular Air Jordan of the 1990s, but the Air Jordan VIII seems to embody the look of the era better than any other Air Jordan of the decade. The design by Tinker Hatfield epitomizes the era thanks to its straps, graphics, colorways, and Bugs Bunny commercials. In other words, when you think “90s” in relation to Air Jordans, you’re probably going to picture the Air Jordan VIII before models like the X or XIII. Even the most popular Air Jordan of all, the XI, doesn’t seem to exemplify the era quite like the VIII does. If you’re around the age of 30 or older and reading this, you probably grew up watching Michael Jordan play and coveting his sneakers. And chances are, the VIII will conjure up a few nostalgic feelings, whether it be begging your parents for a pair, or watching Michael wear them on court in his prime.