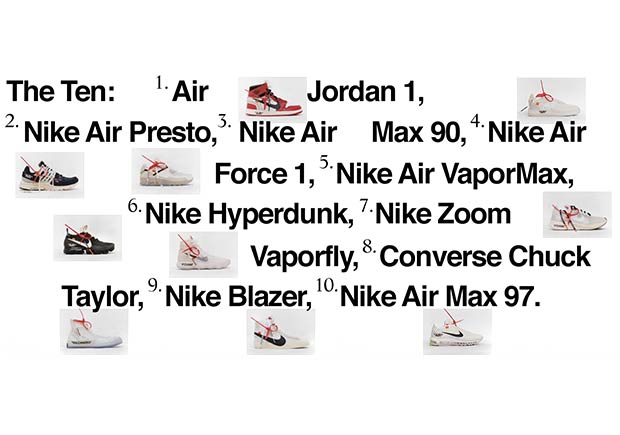 In New York City and London, Nike and Virgil Abloh have embarked on “OFF CAMPUS”, a temporary space with the sole ambition of inspiring and educating the youth. While product will be available for purchase, that almost becomes an afterthought. The true prize is the creative stimulation from the incredible installations for “The Ten”, which looks less like a shoe display and more like a curated modern art exhibit. The real “gram”-worthy experience is sitting with Virgil Abloh, Spike Lee, Odell Beckham Jr., and other creatives of various forms that reveal their process during the open discussions. The un-resellable grail is the collaborative experience of design an all-white Air Force 1 with the direction of Hood By Air.

The shoes created by Virgil Abloh in collaboration with Nike VP of Footwear Design Andy Caine are simply beautiful. No other collaborator in history did what Virgil aimed to do, nor did Nike let a collaborator go that deep. While the Swoosh is an innovation brand that relies on the unconventional to push forward, it can simultaneously be overly protective of its icons. That’s not so much the case anymore; we’re seeing classic models like the Air Force 1 getting altered into the SF-AF1, a shoe that simultaneously appeals to fashion forward individuals and Nike purists. With RevolutionAirs, Nike tapped creatives around to world to design their Air Max dream concepts (and one of them is actually releasing).

We can’t say what this collection will mean in the grand scheme of the business. Yes, adidas is eating up market share because the three stripes logo became relevant again two years ago because of Kanye West. Sneaker industry experts will never credit “sneakerheads” and will discredit the seed and only focus on the fruit and unfortunately for them, the trickle down effect is real – we took attention to adidas first, the brand noticed and adjusted, and the rest followed. But Nike is not doing this in response to a trend – it’s making stuff because they are compelled to.

Nike has and always will be driven by irreverence. Self-lacing Hyperadapts, Air Jordans inspired by Ferraris, shoes built for walking on Mars, a running shoe that helped the world’s greatest marathoner almost shatter an unbreakable record – these initiatives ignored trends and focused on true creation while ignoring the conventional. No overnight camping or waiting on long lines, plugs disconnected everywhere. There is no “copping” – only eager participation and lasting memories. Nothing about this is trendy, which is what makes it timeless. Nike is definitely in the right direction.

The truth is, “The Ten” is just a tiny fraction of the big picture (in terms of sales). There are countless SKUs out there that make brands their money, but if you look at what exactly the top seller for each brand is, it’s clear that the conversation is completely different. Just like how adidas was “refreshed” in 2015 with Boost, neither the NMD or Ultra Boost is a brand top seller (and most can be seen on sale). Similarly, “The Ten”, along with all the other innovations of 2016/2017 such as Vapormax, HyperAdapt, won’t make the tops of those lists, but it adjusts the perception of the brand – and nothing rights a ship better than the right winds and waves.

The NYC “OFF CAMPUS” opened yesterday and the only way to enroll is the register online for one of the courses while spots last (registration for NYC OFF CAMPUS is now fully booked). London will open “OFF CAMPUS” next week.

See more of “OFF CAMPUS” here.