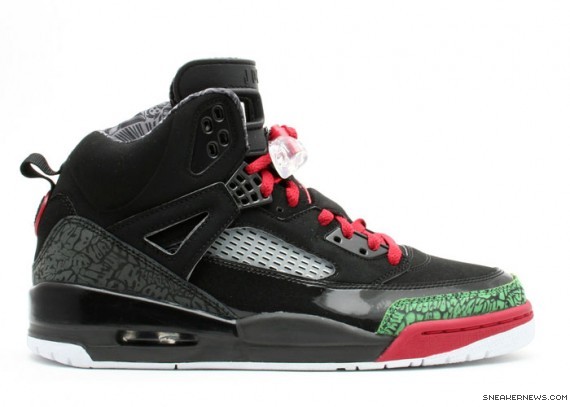 In the Fall of 2006, Brand Jordan released the Air Jordan Spizike (Spiz’ike) which were loved and hated just as much. The word hybrid was rarely used at that time but many called them the Air Jordan “retro Frankenstein”. The official name is written “Spiz’ike”, which in itself was a hybrid, Spike in the first half and Mike in the second half of the name. Spike is of course, the in famous Spike “Mars Blackmon” Lee who is the inspiration for this hybrid sneaker which features the Air Jordan III, Air Jordan IV, Air Jordan V, Air Jordan VI and Air Jordan IX. Here’s run down of the parts:

Air Jordan III – The sole (midsole and outsole) and the elephant print (redesigned to spell out “Spike”)
Air Jordan IV – “Wings” strap on the sides of the shoes that hold lace loops
Air Jordan V – Uses the silhouette of the AJ5 as well as the netting on the side.
Air Jordan VI – Features the tongue and lace locks
Air Jordan IX – Back tab