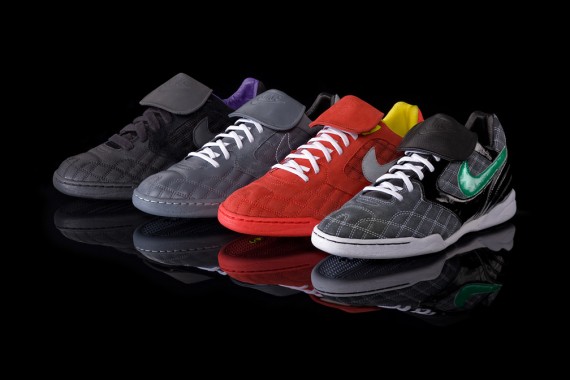 A third place finish might not have been the plan for Lance Armstrong at this year’s Tour de France, but it’s undoubtable that his amazing (second) comeback brought more attention to his LIVESTRONG fight against cancer.  A major part of that, of course, was Nike’s huge yellow and black collection that included the Stages Collection and many others.  This City Pack of Nike Zoom Tiempos was each designed by one of the ‘Cutters’ who rode from London to Paris this year, on fixies, no less!  The New York, LA, Tokyo and London editions are releasing today with 100% of proceeds benefitting the Lance Armstrong Foundation.  Click the jump below for more photos and a list of Nike Sportswear retailers who will have the Tiempo City Pack.

Earlier this summer, the NYC and LA versions of the Tiempo were released in the US exclusively at DQM and UNDFTD. Now, four cities (NYC, LA, Tokyo, London) of the Tiempo City Pack will be available in the US on October 10th, 2009 with the remaining cities dropping shortly.  100% of the proceeds benefit the Lance Armstrong Foundation.