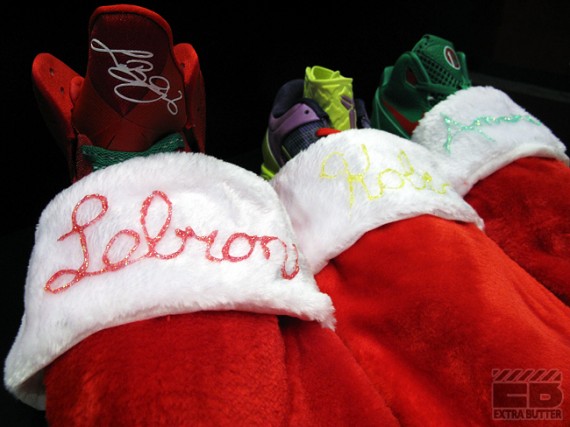 The more things change, the more they stay the same.  That’s one way of describing Nike Basketball’s Christmas Day 2011 pack headed up by the Nike LeBron 9 ‘Christmas’.  It’s a colorway strikingly similar to last year’s LeBron 8 V/2s, though its inclusion on what might just be the most advanced basketball shoe ever created, does indeed preserve the sense of progress building in LeBron’s signature series.  With the Zoom Kobe VII Supreme ‘Leopard’, we’re seeing a shift from last year’s all-green ‘Grinch’ getup to a more Lakers-oriented colorway, which itself has seen its supposed inspiration move from one wild jungle cat to another.  And rounding out the group is Amar’e Stoudemire’s Air Max Sweep ThruChristmas PE, a shoe previewed just like teammate Carmelo Anthony’s Xmas PEs in green and orange, now appearing with a Sport Red strap that seems far more befitting the season.  Reports had these arriving at retailers on Christmas Day, but stores like Extra Butter will be closed for the holiday and should have these in stock on Monday morning, December 26th.