Michael Jordan and “The Shrug”

Michael Jordan’s greatness can be counted by all the historic moments and god-like accomplishments throughout his career. But even he’ll tell you that during some of these occurrences, there was no explaining as to how it was happening; it’s almost like an out-of-body experience of being in the zone, something that we’ve all at one point or another have been stuck in, whether its with shooting hoops, playing a video game, or doing some sort of repetitive, menial task. Sneaker News: Was It The Shoes? continues tonight with another look at a major moment in Michael Jordan’s career – the infamous ‘Shrug’ from Game 1 of the 1992 NBA Finals. Continue on for the full story, and don’t forget to catch the earlier Was It The Shoes? features if you’ve missed them!

Early on in Michael’s career, the three-pointer wasn’t an oft-used weapon in his arsenal. Up until the 1992 NBA Finals, Michael has never surpassed 100 three-pointers in a season – in fact, he’s only surpassed that figure twice in his entire career. Considering how much the mid-range jumper was essential to Jordan’s offensive dominance, it’s rather surprising that MJ never bothered with operating beyond the arc. What makes this particular feat so astounding was that during that ’91’-92 NBA Season, Michael Jordan hit 27 long-ball jumpers in total; that’s a rather unexceptional rate of one three pointer every three games! In addition, Michael Jordan holds the record for the worst 3-Point Shooting Contest Round, a feat that he ‘accomplished’ during the 1990 NBA All-Star Weekend.

Coming off their first-ever NBA Championship, the Chicago Bulls were heavily favored to return to the NBA Finals. Sporting an outstanding 67-15 regular season record, the Bulls entered the 1992 NBA Playoffs at full power and quickly stated their dominance by easily handling the Miami Heat in three games in the First Round. Jordan and Bulls faced an incredible test in the Conference Semi-Finals round, battling the rival New York Knicks for seven games, and went on to defeat the Detroit Pistons in the Conference Finals in a neat six. The Finals would be a clash between the Bulls and the Portland Trail Blazers, a team that like the Bulls, were just on the brink of Finals glory were it not for a Conference powerhouse – the Los Angeles Lakers in this case – in the way. 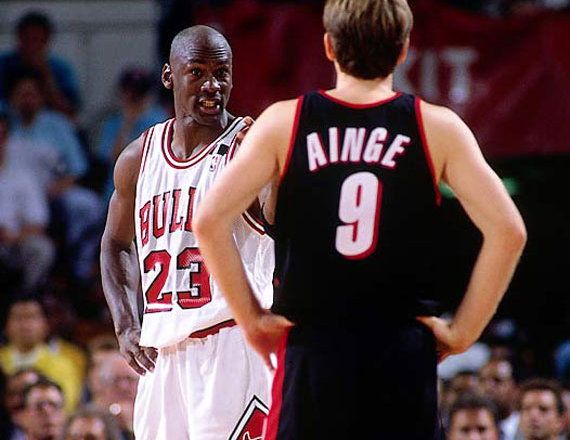 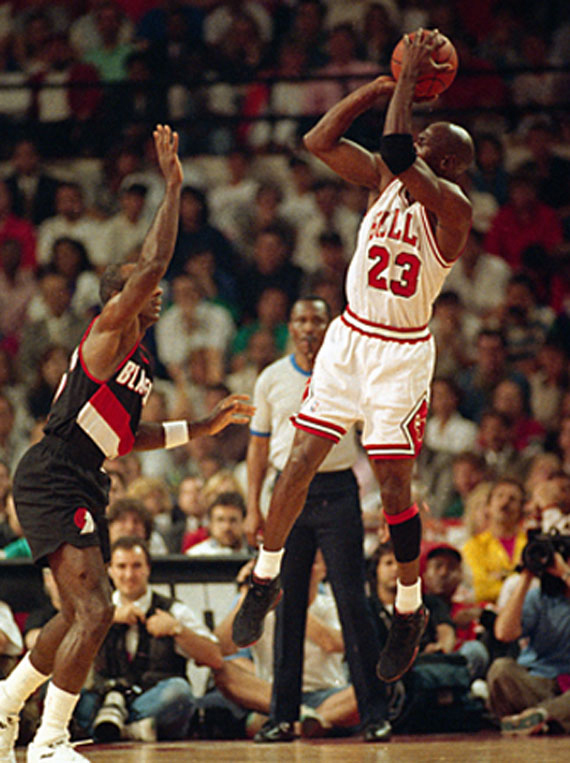 The NBA Finals began in Chicago, and the first quarter of Game 1 proved that the Bulls had quite a task at hand. The Bulls had lost just fives games at Home during the regular season, and trailing the Blazers after the first period kept Bulls fans on the edge of their seats. For the Bulls to pull out a victory, Michael would need to perform above his standards, and that, he did; Jordan finished with 35 points by half-time (an NBA Finals record), and hit six three-pointers in the process – the bulk of that half-dozen coming on a scoring flurry in the second quarter. By the time Jordan hit his sixth three-pointer, he had given the Bulls a 17-point lead; Marv Albert screamed ‘YES!’ for the sixth time and Michael looked toward the scorers table, completely baffled as to how those long-range jumpers were going in. In a post-game chat with Ahmad Rashad, Michael provided some clarity: “I was in a zone. My threes felt like free-throws, man. I really didn’t know what I was doing, but I was taking them and they were going in, so, they really helped the game.” 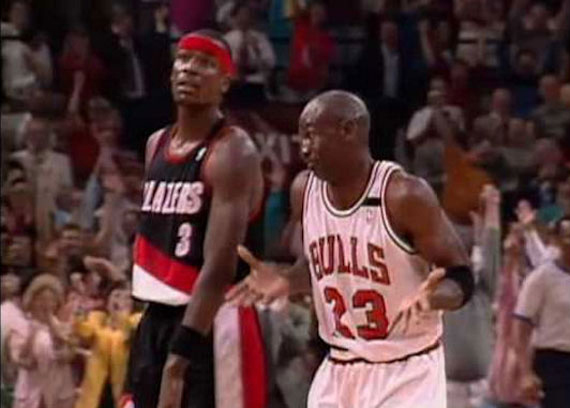 The definitive Game 1 victory helped navigate the Chicago Bulls to their second consecutive NBA Championship as they defeated the Portland Trail Blazers in six games. The Blazers put up a valiant effort through the first four games as the Series was tied at 2-2 by Game 4’s end, but Michael and Bulls re-took the momentum with a Game 5 victory behind Jordan’s 46 points. The Bulls never wavered in their confidence and soon enough, they were hoisting another Championship trophy above their heads! 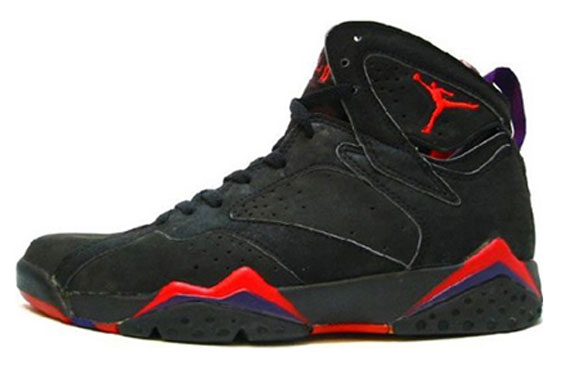 During “The Shrug”, Michael Jordan wore the Air Jordan VII in the Black/True Red colorway; although the shoe was a black-based colorway, Michael wore them during Home Games (as he did with many of his Air Jordans in the past and future). A decade later, the Air Jordan VII was re-issued, and the nickname ‘Raptors’ came about as the Black/Red/Purple matched the colors of the expansion Toronto Raptors jersey. A similar color released in 2009 as part of the Air Jordan VII 60+ Defining Moments Package, although a distinct shade of dark grey was used on the upper, and this Saturday, the “Raptors” will hit stores once more. Although “Shrug” might not have as much sticking power as “Raptors”, these Air Jordans should be recognized for this iconic moment in Michael Jordan’s career history! 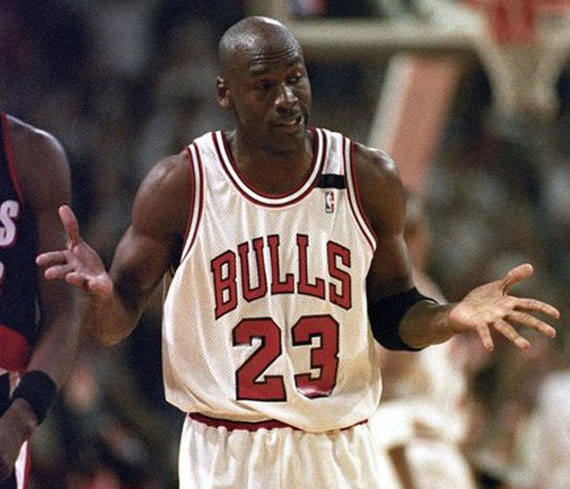