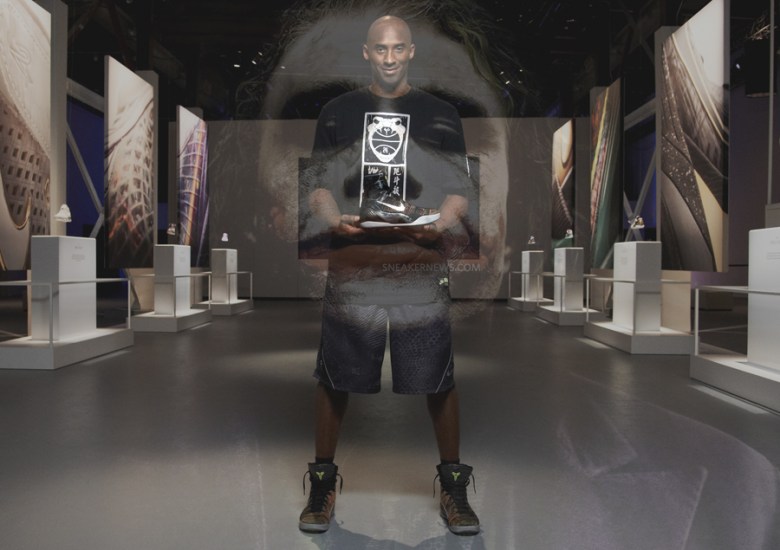 Chaos Becomes Masterpiece: The Timeline of the Nike Kobe “Chaos” 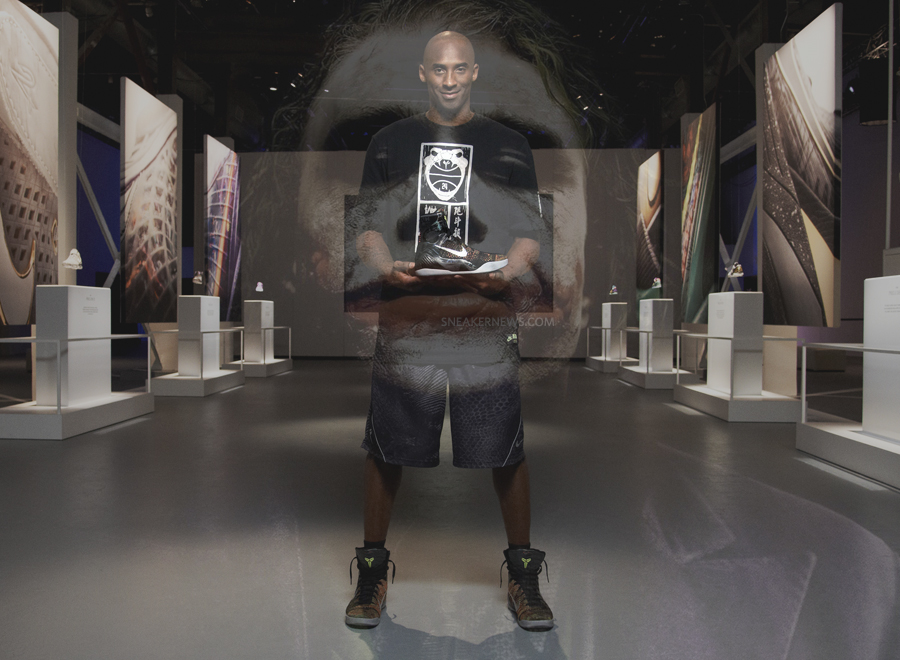 Earlier today Nike Basketball gave its followers an added bit of Inside Access with an in-depth review of Colorway Inspirations. What it revealed was that moving forward, Nike would launch its most prized signature models with energetic colorways that bridge the gap from shoe to concept, spurning the basic, team-oriented flavors for later on in the timeline for visual arrangements that tell a much richer story. It was also revealed that the Nike Kobe 9 Elite “Masterpiece” is just another rendition of the “Chaos”, which was actually inspired by Heath Ledger’s portrayal of the Joker from The Dark Knight.

With just a few weeks away from the official release of the Nike Kobe 9 Elite “Masterpiece” aka “Chaos”, the Sneaker News team decided to pay tribute to Kobe and the creative folks at Nike by reviewing the timeline of one of the most memorable Nike Kobes ever created – the “Chaos” that first unveiled itself with the Zoom Kobe 4. With Nike giving the Joker-inspired theme a rest over the last two signature models, you may have forgotten about this classic piece, but be prepared as Nike  will revisit Chaos this February 8th when the Kobe 9 Elite “Masterpiece” will officially hit stores. 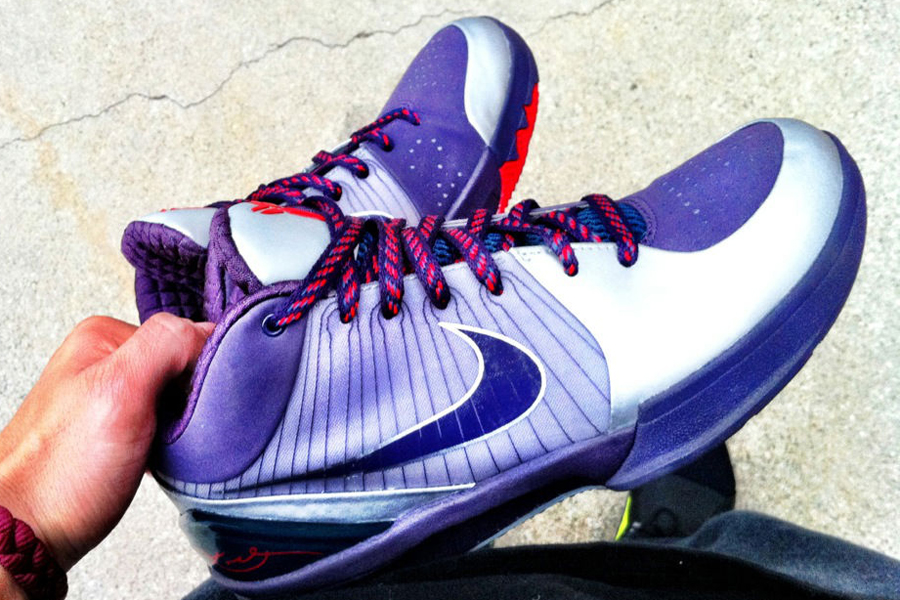 2008’s The Dark Knight is often regarded as one of the best films of the 21st Century. It also ranks really high in Kobe Bryant’s personal list of fave flicks as he’s watched the Christian Bale remake countless times. Nike obliged and revealed the first-ever “Chaos” with the Nike Zoom Kobe IV, releasing at limited accounts on January 17th, 2009. Below, you’ll see Terrell Owens wearing the Chaos 4 during the Celebrity All-Star Game in February of 2009. 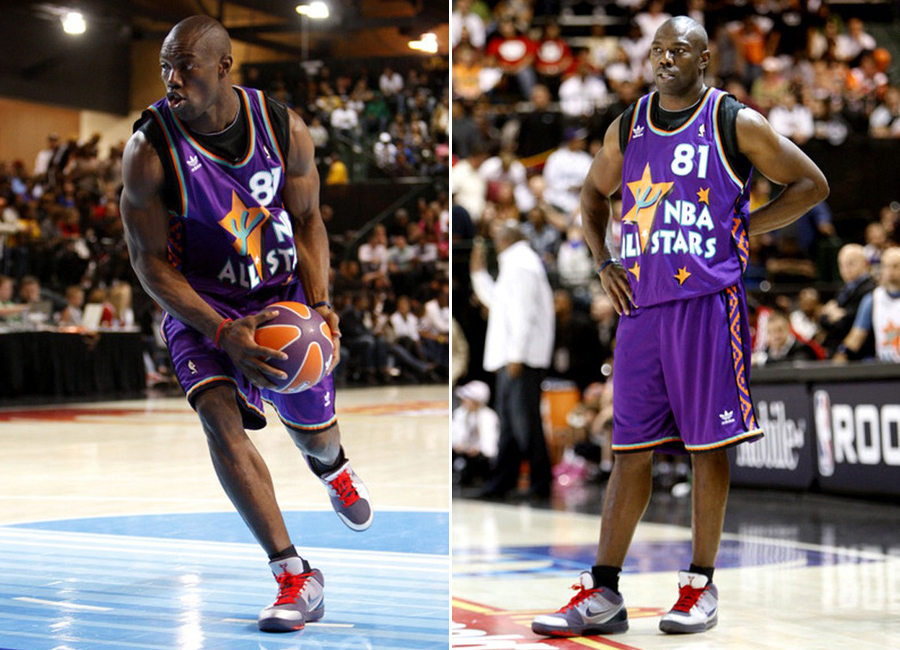 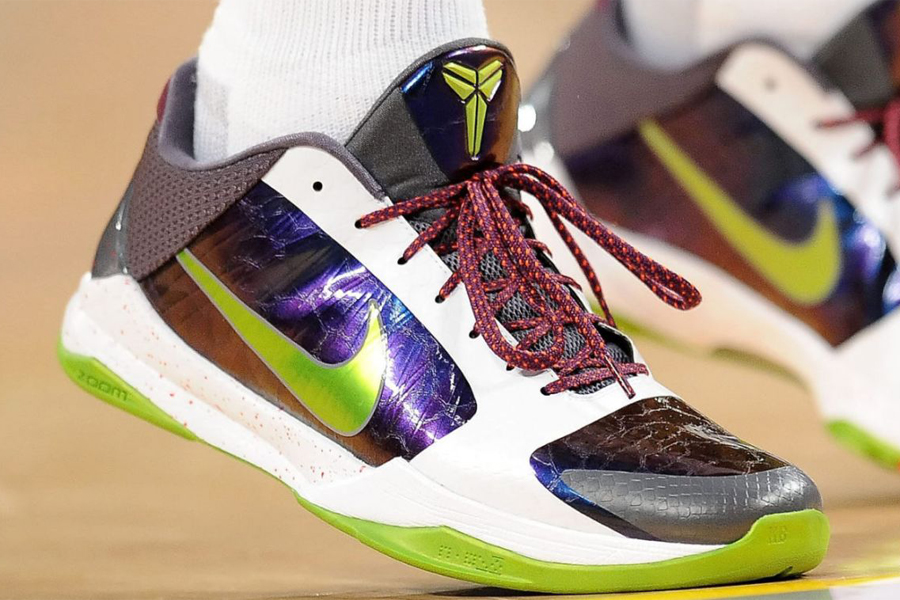 Nike brought back the “Chaos” colorway on the Kobe V, using brighter colors from the Joker aura to create an incredible release. What made the Kobe V “Chaos” so interesting was that Nike released an accompanying “Dark Knight” colorway to play off the Batman vs. Joker rivalry. Of course, Nike never officially billed either as a representative of the comic-book hero/villain, but the “Chaos/Joker” and “Dark Knight” set stand as one of the true standouts of that signature model. The “Chaos” was also appointed as the year’s Christmas colorway; below, you can see Kobe Bryant in the Chaos V during the Christmas Day game against the Cavaliers. 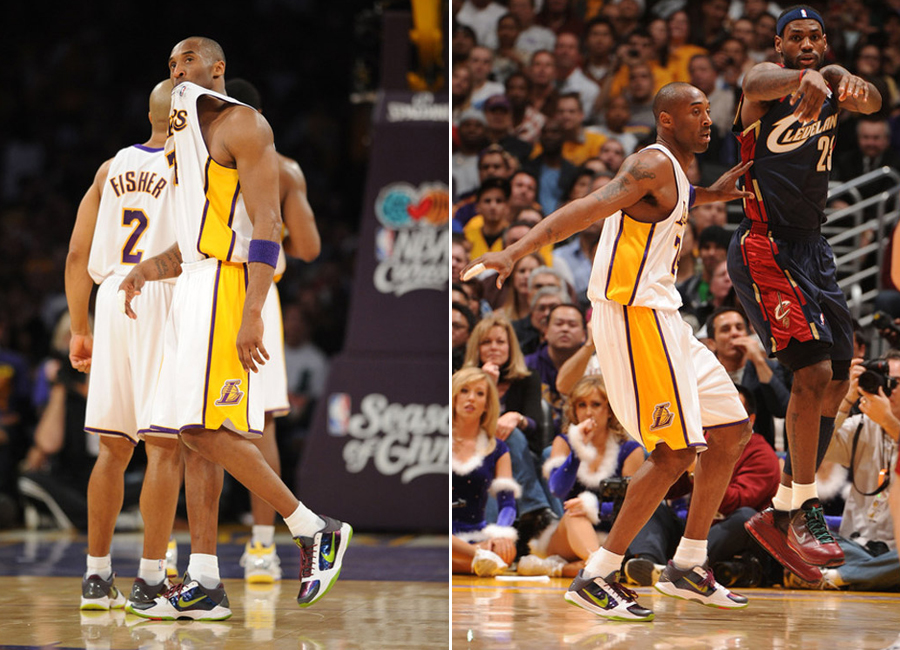 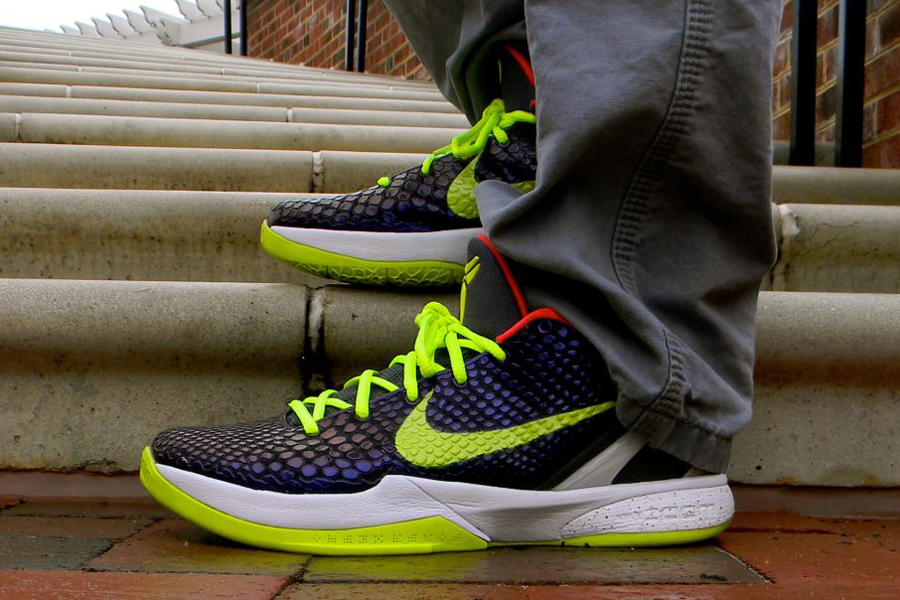 Chaos returned for a third straight year, taking form in the Nike Zoom KD 6. This release also ushered in the “Supreme” grade release, which bumped retail prices up to $150. After this release, Nike would shelve Chaos for two straight years, although NIKEiD options made a Kobe 6 Chaos and Kobe 7 Chaos very much a possibility for those who wanted to continue the string. See Kobe wearing the Chaos 6 below. 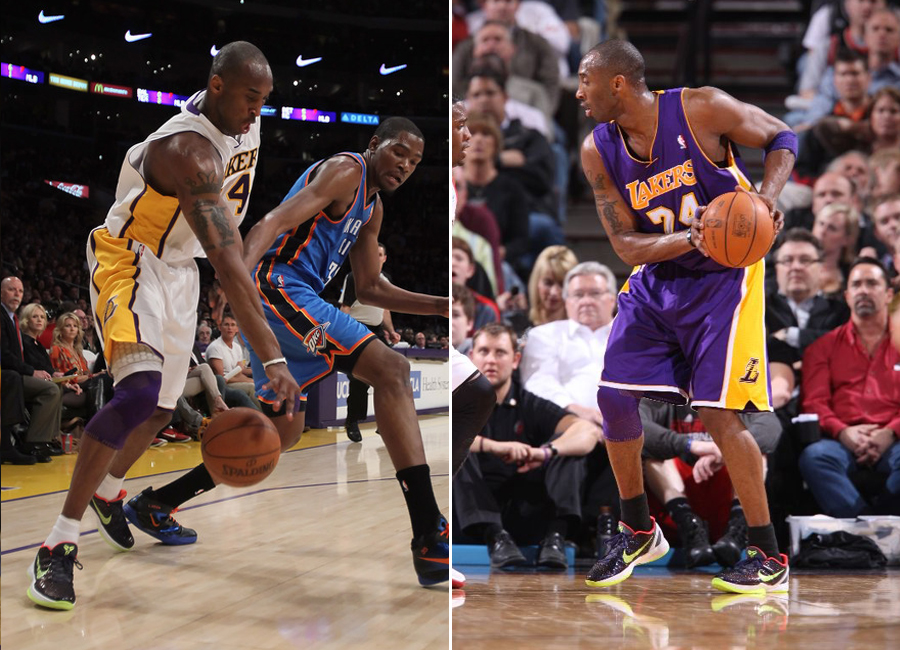 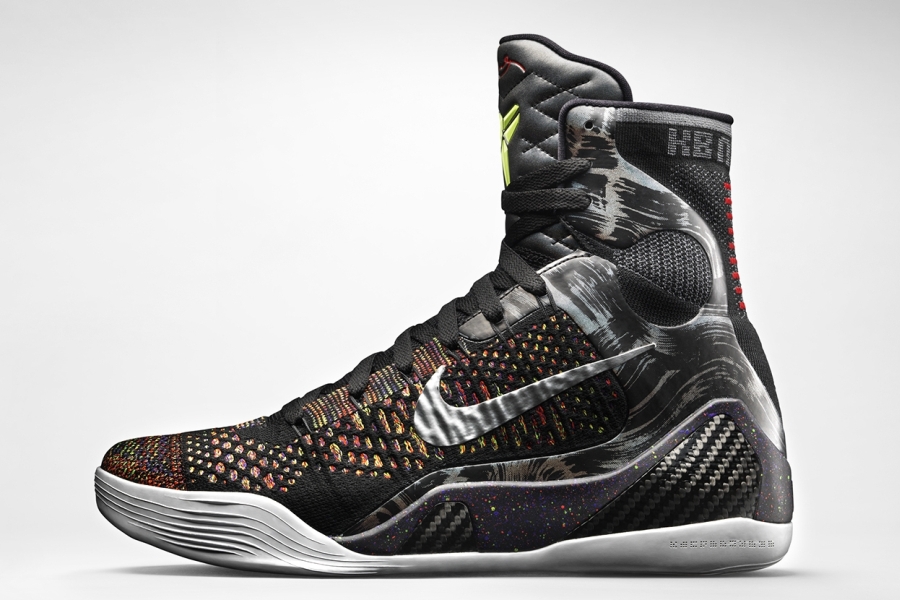 Today, Nike Basketball revealed that the purple, yellow, red, and black knits in the Flyknit exterior are indeed taken from the “Chaos” concept. The “Masterpiece”, or know aka “Chaos”, will officially release at Nike Basketball retailers on February 8th. 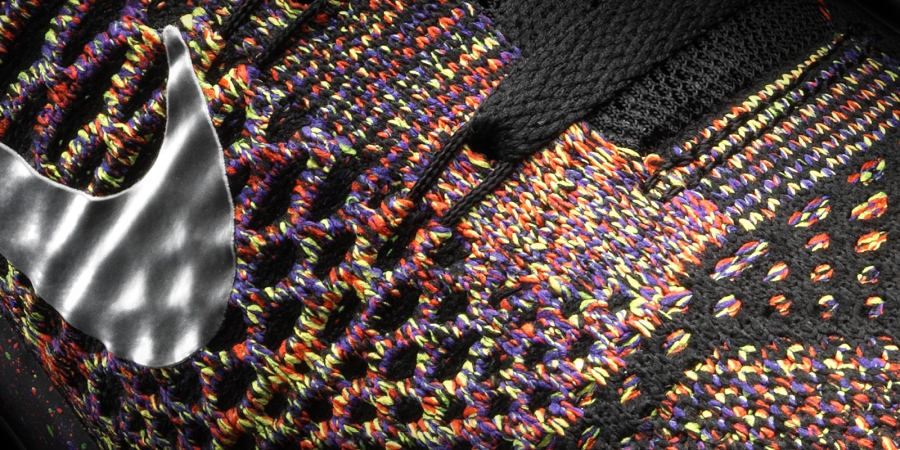 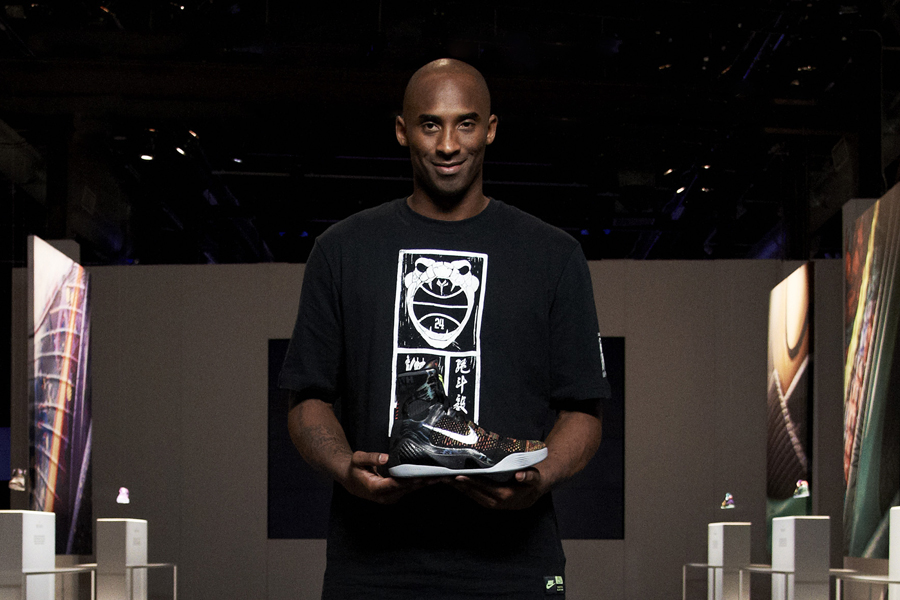