Teased via Instagram by Aimé Leon Dore's Teddy Santis, who was appointed as the Boston-based brand's Creative Director of Made In USA on April 5th, 2021, the sneaker is the sixth installment of the New Balance 990 series, which began in 1982. Despite being rooted in performance-running, the line has evolved into a favorite among casual consumers and savvy streetwear enthusiasts. Akin to its predecessors, the NB 990v6 features a breathable mesh base overlaid with a bevy of premium perforated leather pig suede panels. Reflective accents appear across the upper, as does “990” branding on the lateral heel–both details that've been included from the New Balance 990v3 (2012) onward. Furthermore, a first-look at the shoe reveals an inaugural greyscale colorway, which has become customary of many new models from the brand.

Historically, the 99x lineup has introduced updates to New Balance's cushioning and traction systems, and the 990v6 seemingly continues this tradition. Its ENCAP midsole features a combination of lightweight foam and durable polyurethane. The latter takes over the heel, but forgoes the pronounced appearance found on the New Balance 990v5. Yet, like its immediate predecessor, the v6 adopts a sporty aesthetic, indulging in a slimmer shape and more angular lines than past New Balance shoes. 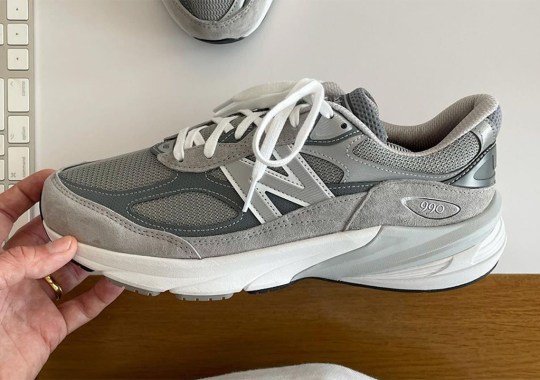