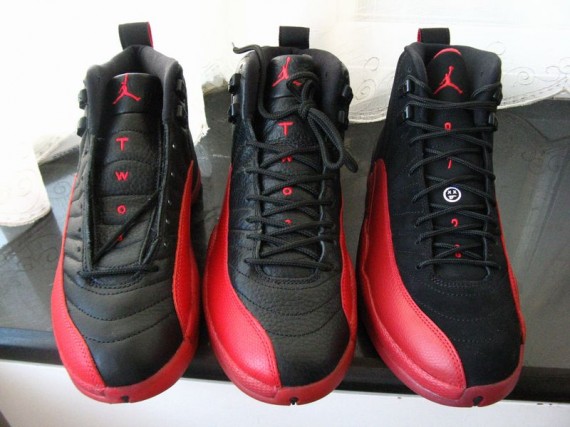 As you’re probably well aware by now, the “Flu Game” edition of the Air Jordan XII will be making its second go-around as a Retro model. Much to the dismay of some collectors, in addition to the new Flu Game graphics that have been included on the new version, the material of the upper has also been switched to suede. While this isn’t as big an issue to some as to others, the change is still very noticeable. Although the switch does give sneakerheads something to complain about, a look at the two previous versions shows that even the 2003 Retro featured some slight differences from the 1997 OG model.

As you can see through these comparison shots, the OG upper was a smooth leather, while the the 2003 Retro model sported a more full-grain pebbled leather look. Aside from the upper material and the special “Flu Game” touches, the only other major change is on the heel. The Jordan branding was Red on the two previous versions, but the new edition uses white Jordan text and a Red “23” shout-out instead of the Black look of the others. If you’d like to analyze further, you can look through a ton of pics after the jump to see the three different variations, including some looks at even the GS and baby sizes of the OGs.  Via HoopChina.