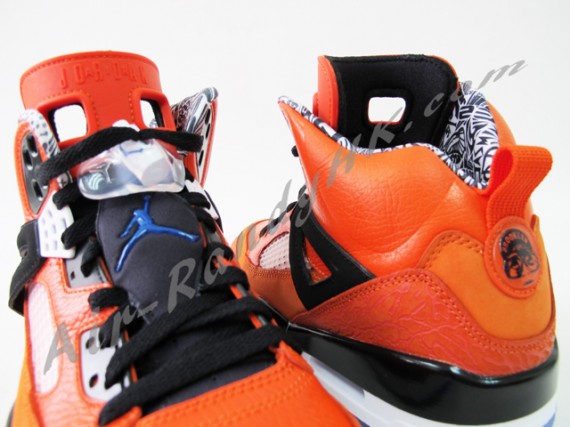 The only thing resembling criticism we’ve seen on the New York Knicks-inspired pairs of Jordan Spiz’ikes that Spike Lee himself showed off months ago as a presumed exclusive, is that the blue nubuck pair could maybe do with a bit of extra orange to even out the Big Apple colorway.  Well, how’s this for some more orange?!  Built with more leather and just a hint of nubuck along the mudguard area, this orange Spizike is blocked identically to the blue joints, yet feels like a harder contrast and would probably do well with a release date around the end of October.  The official drop isn’t set in stone as of yet, but we’d expect these as a Holiday 2011 release, which means you better take an extra job wrapping presents or something to make sure you can get all the goodies on tap for what’s looking like the most quality-rich Christmas season a sneakerhead’s ever seen.  Have a look at more shots of these orange Knicks Spiz’ikes and let us know whether you’ll be getting these, the blue joints or both.  via Air-Randy