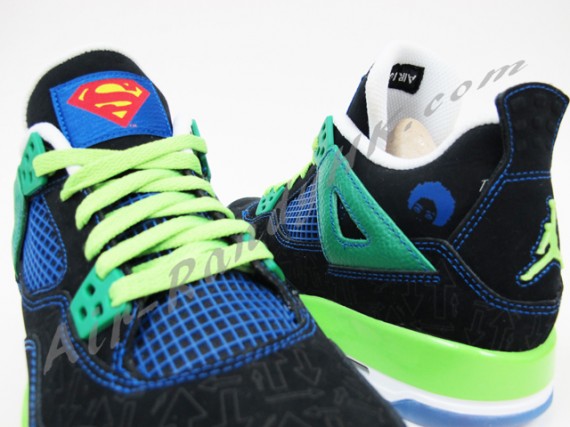 Sneakerheads are psyched for the return of the Air Jordan IV in 2012, but before the OG Cements and Military Blues hit retailers next year, there’s a brand new Four in store for late ’11. The Air Jordan IV Doernbecher is part of the eighth collaboration between Nike and the Portland children’s hospital whose young artists came up with the designs for these ‘DB’ edition drops. Jordan Brand gets represented with this otherworldly take on a familiar design, one whose Spike Lee insignias mixed with a melange of laser cut arrows paired with a blacklit colorway has us picturing an alternate universe where MJ was the greatest breakdancer of all time. Add all this together with a Superman crest so real it must’ve been licensed from DC Comics, and you’ve got one of the most bizarre Air Jordan designs ever released; are you brave enough to wear them? Click through to see more angles and stick with Sneaker News for updates on these and all the Nike x Doernbecher Freestyle VIIIrelease dates. via Air-Randy