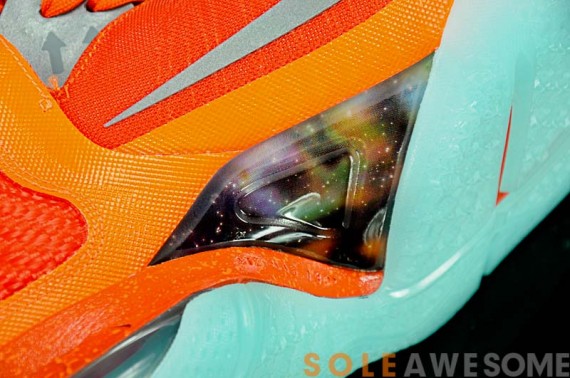 Nike takes over for Reebok as the official supplier of NFL licensed apparel shortly after the Super Bowl in February; do they have similar plans to influence the NBA’s jerseys starting with that league’s All-Star Game a week later? Nike Basketball’s latest revelations fly in the face of the traditional East blue/West red color configuration, with the related Zoom Kobe VII going for black with a multicolored array of accents as this Nike LeBron 9 ‘Big Bang’ centers its otherworldly aesthetic on the ‘other’ coast. A firey orange upper and glow in the dark translucent outsole are sure to draw attention at the ASG in Orlando irrespective of their congruency with the Eastern Conference unis; will you find a place in your wardrobe for one of the more inventive colorways we’ve seen applied to the LeBron 9? Let us know with a comment as you click through to see a series of new images and stick with Sneaker News for the US release date because if history holds true, it won’t be very long now at all. via Sole Awesome