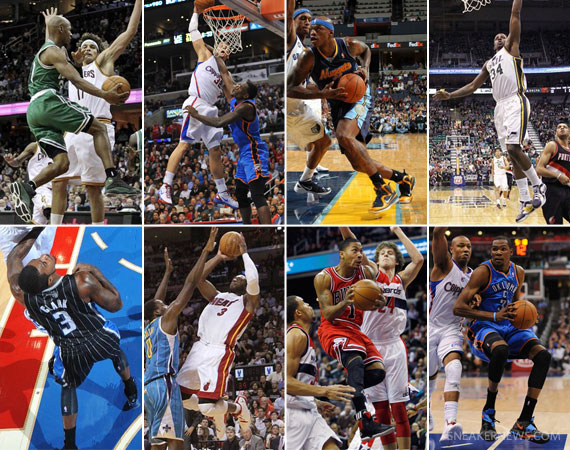 What a way to close out the month of January! Just last night, Sneaker News showed you Ray Allen’s insane Air Jordan XIII PE in Black/Green, but that wasn’t the only notable sneaker sighting from the past two days. Al Harrington of the Denver Nuggets sported a Nike LeBron 9 iD colorway of Gold/Black, while C.J. Miles of the Utah Jazz wore a great colorway of the Nike Zoom KD III iD. Chris Paul wore a Blue/Red colorway of the Jordan CP3.V, while teammate Blake Griffin wore Kendrick Perkins’ face on his feet (actually the Nike Zoom Hyperdunk 2011). The Knicks finally got back to winning ways, with Amare Stoudemire sporting a nice PE colorway of the Nike Air Max Sweep Thru, and Derrick Rose and the Bulls bounced back from the loss with their leader wearing the adidas adiZero Rose 2.5. Next to Ray’s XIIIs, the sighting of the two nights might be Earl Clark’s Royal Foams. Check out all the NBA action from the last two days of January below, and stay with Sneaker News as we keep you in tune with all of NBA Feet for the month of February! via ESPN.