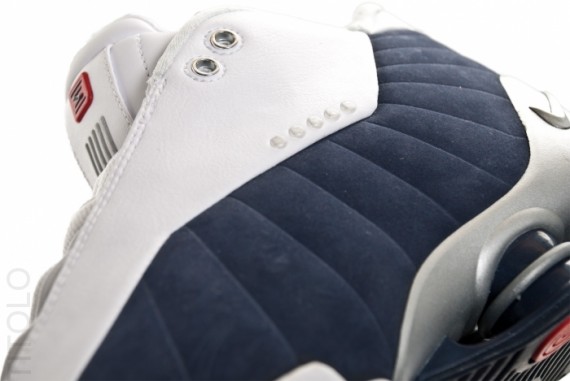 Vince Carter was the 1999 NBA Rookie of the Year and followed that up with arguably the most spectacular performance ever in his 2000 Slam Dunk Contest win. Vinsanity rocked AND1’s most memorable silhouette the Tai Chi on that occasion, but succeeding on a spotlight that big made Carter a target for brands beyond trash-talking t-shirt companies. Vince signed with Nike Basketball and has rocked the Swoosh ever since, or in the case of this first model with which he’s intimately connected, five Alpha Project dots. The Nike Shox BB4 returns in this USAB colorway that reminds us at the peak of his powers, ‘Air Canada’ was leaping over anyone in his path. The iconic dunk on Fred Weis at the 2000 Athens Games was Dream Team III’s signature moment and you’ll get to relive those memories as Nike Sportswear brings these back for Q3’s Dream Team collection. Click through for a better view, let us know where these rank on your Olympic shopping list and pre-order yours today from Titolo.