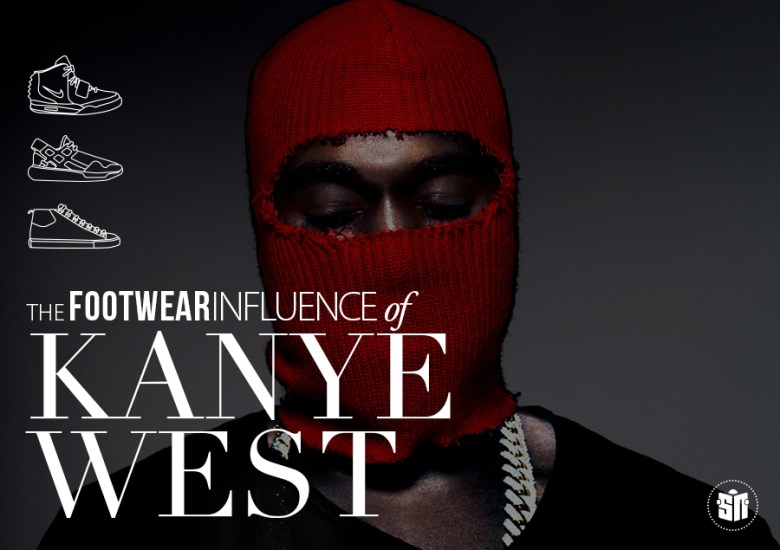 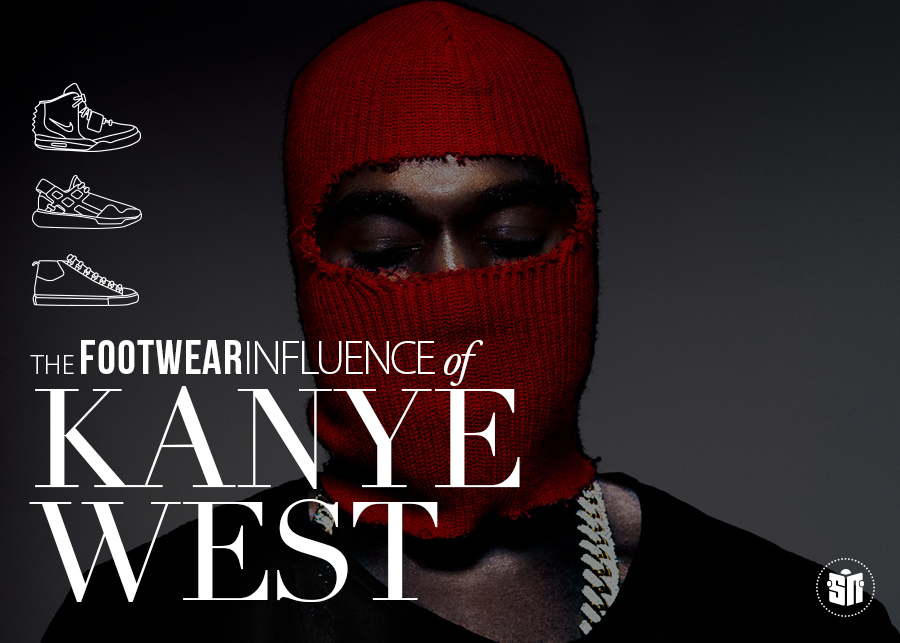 It’s almost impossible to ignore the massive influence that Kanye West has had on the sneaker industry and the way its consumers choose their products. His footwear selections and tendencies were quickly imprinted into the collective conscious of his fanbase, but more importantly, they sent the industry as a whole back to the drawing board in an effort to bring products that aligned with his thinking. Of course, the pop culture megastar was just like everyone else when the sneaker culture was in its neophytic stages; he merely wore what he liked, steadily rotating Air Jordans, Air Max 1s, and Air Force 1s, but as his career began to “touch the sky”, so did his personal tastes.

Along the way to the state of “Kimye”, Kanye West has taken a liking to a number of different footwear styles and genres. From the Retro Nikes, he went on to A Bathing Apes, kicks from luxury brands, and who could forget the Polo Ranger Boots? It all culminated with his own personal sneaker design facilitated by Nike, and from there a groundbreaking sequel and a surprising alliance with the brand’s biggest competitor in adidas. Throughout this somewhat winding path, Kanye West has dictated what fashionable footwear is, and we’re breaking down this phenomenon by pointing out some of his sneaker choices that have made lasting effects. Continue on for the full feature and stay tuned to see where Kanye West takes the sneaker game next. 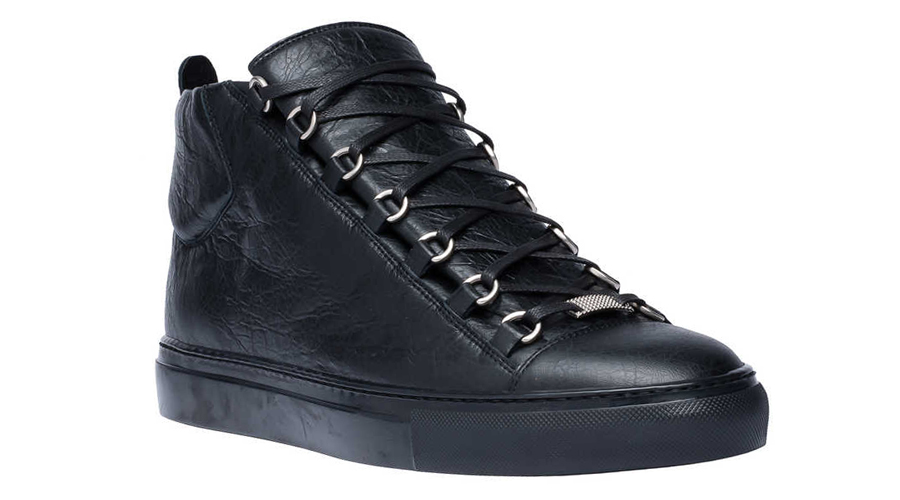 Kanye opens the door to the world of high fashion footwear

In Kanye’s own words he’s “more than 50 percent responsible for every Balenciaga shoe they sell.” It’s possible that his assessment may be a bit inflated compared to the actual numbers, but before Mr. West brought them out, the Arenas didn’t get as much love. His personal tastes have in the past couple of years trended towards more and more luxury brands, and people have responded with a much more vested interested in lines like Givenchy, Balmain, and the aforementioned Balenciaga. These days, plenty of sneakers collections have one or two high-end entries from labels like these, and it’s hard to argue that Kanye isn’t at least partly responsible. 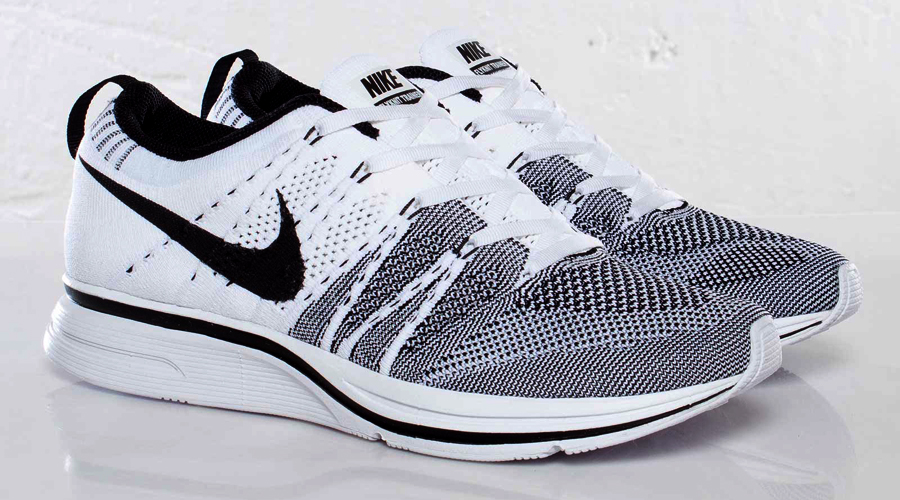 There are a handful of specific silhouettes that Kanye had a hand in juicing up – take the Nike Flyknit Trainer for example. When the line debuted a couple years back the response was positive, but the tech seemed to get the loudest response predominantly from two crowds – runners and Nike fans that routinely get geeked out by innovation. A couple of Kanye wears changed that around; fast forward to two years after the Flyknit Trainers hit retail and the black/white pair that he put his stamp of approval on remain some of the tougher ones to track down. 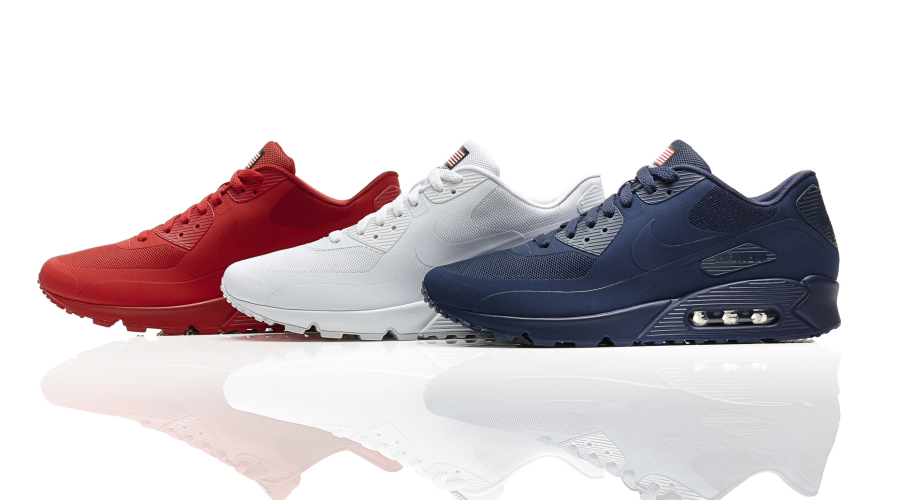 There’s no better example of Kanye’s influence on a single shoe than the Nike Air Max 90 Hyperfuse “USA”. The three-shoe set was anticipated by plenty, by it was by no means tough to track down upon arrival. And yet, Flight Club prices for red, white, and blue currently sit at $850, $500, and $450, respectively. Kanye of course appeared in each during the summer of their release (The navy pair was even on-feet during that infamous paparazzi beatdown at LAX). 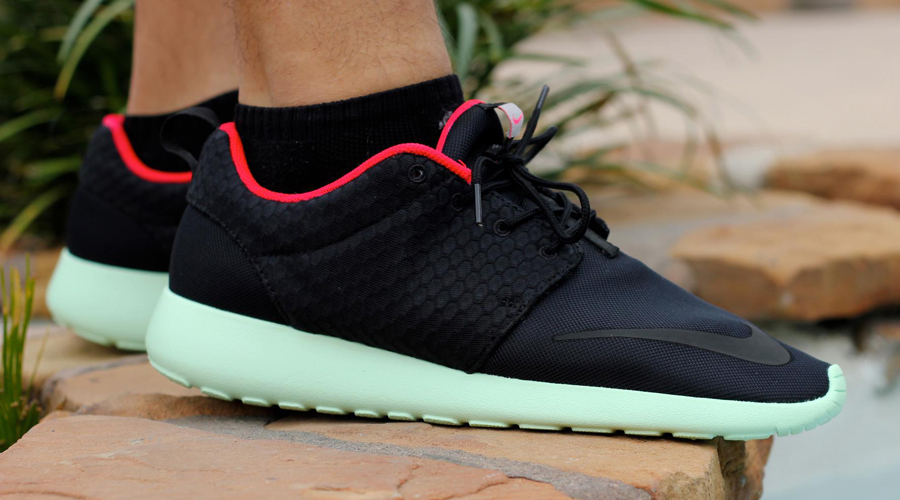 “Solar Red” and “Blink” are mainstays in sneaker customization

Black and pink sneakers were around before the Nike Air Yeezy was. But, were they around in the same numbers? Absolutely not. Ever since the Air Yeezy “Blink” released in June of 2009, the mix of black, pink, grey, and the opaque gum look from the glowing soles has been a go-to source of colorway inspiration.  Think about how every time a new model debuts on NIKEiD or when a sneaker customizer attempts to remix a pair, black and pink combinations with the glow in the dark soles are immediately created – as are tributes to rest of the official Yeezy line (Net, Zen Grey, Pure Platinum). 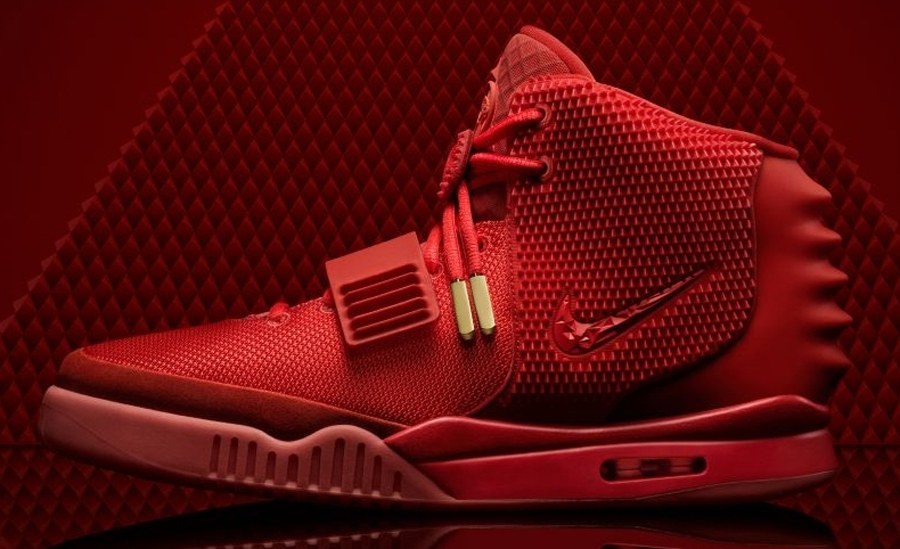 All-red in the face

The Nike Air Yeezy 2 “Red October” set the sneaker world on fire as sneaker brands were rush-delivering their own all-red concoctions once the sneaker first made waves in early 2013. But it’s not just the smaller labels that are painting their shoes red – the ambitious Jordan Shine will show up soon with such a look, and so will the KD 7, a sneaker that is highly regarded within Nike ranks. Ever since the Red Octobers showed up before our eyes, they’ve helped usher in a new wave of similarly colored pairs – and it’s not going away anytime soon. 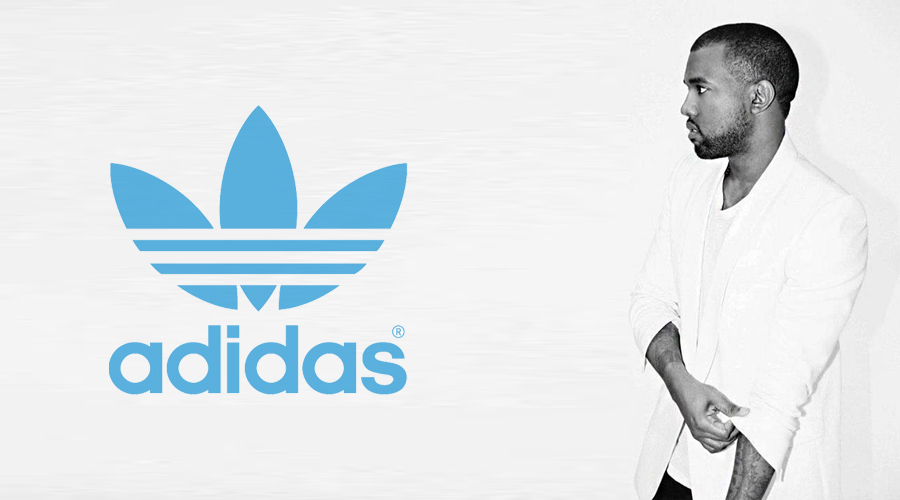 The rise of adidas

Spend any time in sneaker circles in 2014 and you’ll hear plenty about the return of adidas. The brand is having a great year thanks to returned silhouettes like the Stan Smith, a strong showing at the World Cup, and their increasingly broad stable of celebrity partners. Chief among the celebrity partner group is Kanye West, whose influence has already been felt despite the fact that none of the Kanye West x adidas product has been released or even unveiled yet. Future orders are up in anticipation of the collection, adidas’ new models have had plenty of shine thanks to some on-feet West moments, and people even took Kanye’s side when he was firing shots at Nike and Mark Parker during the Yeezus tour. If the “rise of adidas” ends up being everything it’s built up to be, you have to give Kanye a bulk of the credit. 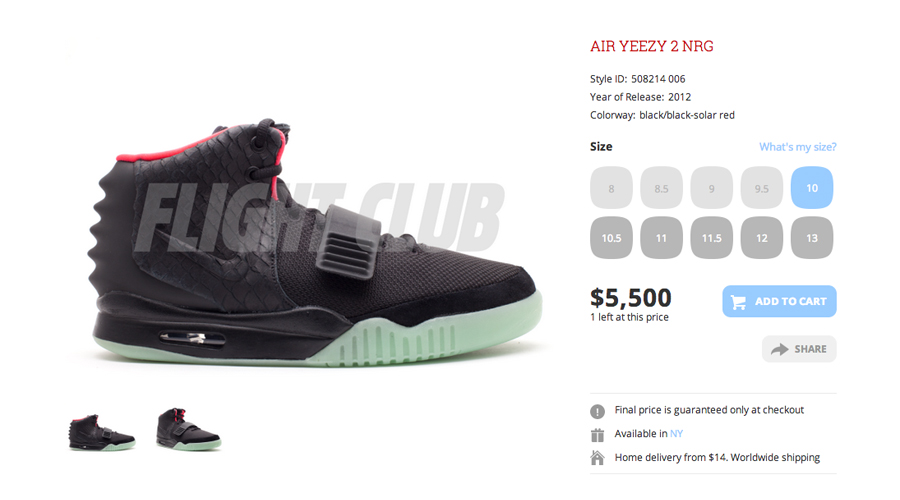 The Air Yeezy changing the game

There aren’t many shoes in this millennium that can stand up to the Air Yeezy in terms of impact. At a time when Jordan Retros were the only item that seemed to move the needle, the first Kanye West x Nike project showed up and brought the nebulous “hype” factor to screaming new levels. The re-sell market found a new ceiling, as pairs eventually crept up to prices never before seen outside of the PE and sample realm. Mainstream media took notice, and the release of the first Air Yeezy registered one of the biggest blips above the standard sneaker culture that any singular release ever has before. When the Air Yeezy 2 came around it changed the game again, between the random release times, endless speculation, Twitter RSVP inception, and the eventual surprise release of the “Red Octobers” that closed the chapter on the Kanye x Nike relationship.

Kanye himself has a couple of times made the claim that he’s the reason that the Air Jordan retro occupies so prominent a place in the current sneaker landscape. Putting it bluntly, he has stated “The only reason why Brand Jordan is relevant is because of two people– me and Don C.” and went on to connect their nonstop wears of black/red pairs to the ever-increasing level of interest in those sneakers. While Kanye isn’t the sole reason why the Retro Jordan is the titan it is today, there’s no doubt that he made some of us more and more aware of certain pairs. 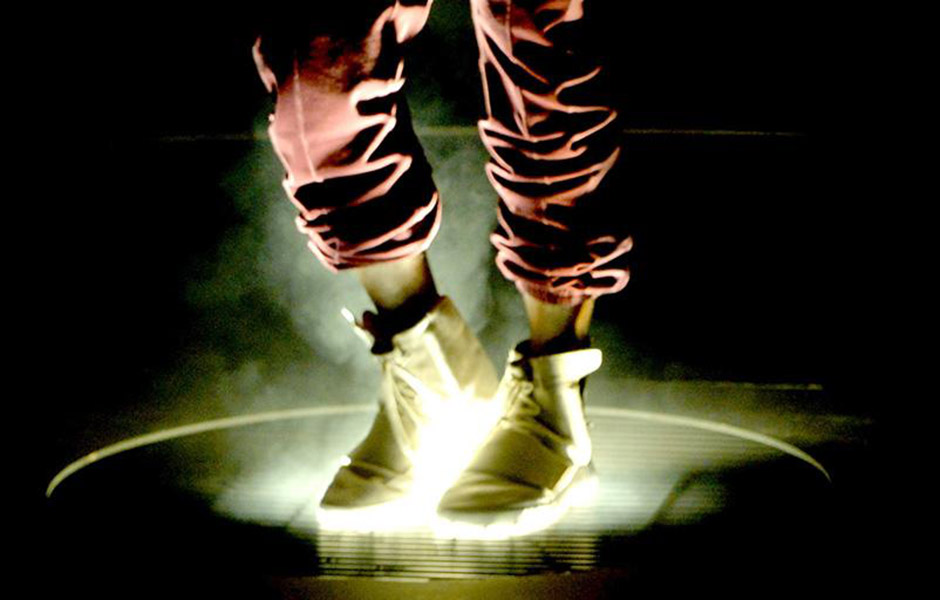 The Yeezy Boost brings an unprecedented spotlight on adidas

On February 9th, 2015, adidas officially announced the release date for the adidas Yeezy 750 Boost. The looming release brought an unprecedented amount of attention to the three-stripes brand during an occasion that is usually dominated by Nike. Should the Swoosh fear Kanye? Probably not, but they definitely lost a key figure to a competitor.