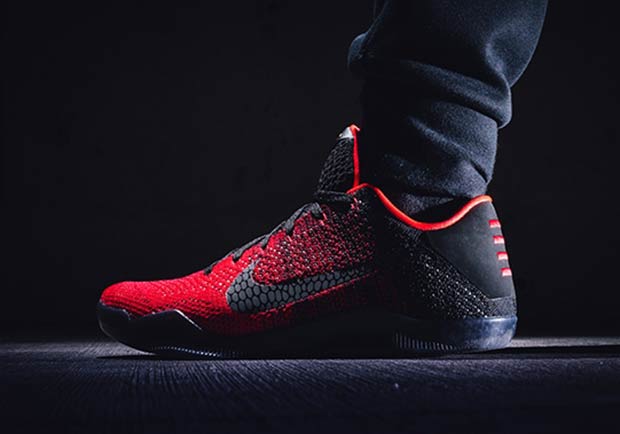 A Detailed Look At The Nike Kobe 11 “Achilles Heel”

The Nike Kobe 11 will serve as Kobe’s on-foot victory lap as it will be the last signature model the Black Mamba ever wears on-court. Designer Eric Avar took the concept of basketball sneakers to new heights when paired with Kobe and for his eleventh signature model, the duo simplified everything down to its purest form. The Flyknit upper gets an upgrade thanks to TPU – thermoplastic polyurethane threads – that makes the material stronger than ever. The debut colorway, the Kobe 11 Achilles Heel , will launch on January 9th, 2016 for $200. With an intimidating gradient upper that sees a black heel fade into University Red, a snakeskin Swoosh adds to the whole ‘Mamba’ motif. Are you a fan of the colorway? Check out more photos below and look out for this pair right now on eBay.